It was wet and cold when the first teams arrived at the Bode Eng Vej, but it cleared op on thursday afternoon, and the weather was nice during both days. Two rounds of qualifications were held on friday, and a third on saturday morning. Then the best eight would advance to the "shoot out".

The track conditions were not as good as usual, the crew at Mosten had little time to prepair it, and many riders suffered wheel spin during the first round on friday.

Jörg Braune was first in line, not unusual this season, as he is highly motivated in his first year in the class. 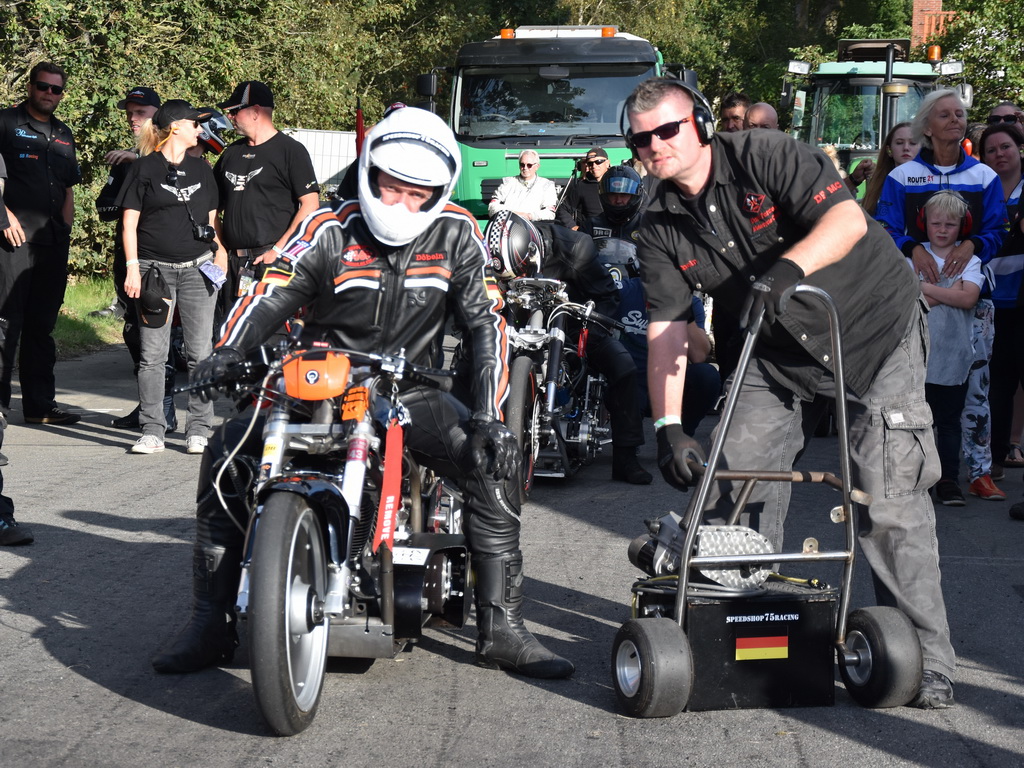 John Hanssen only made one pass on the bike that was formerly owned by Tomas Heinze. 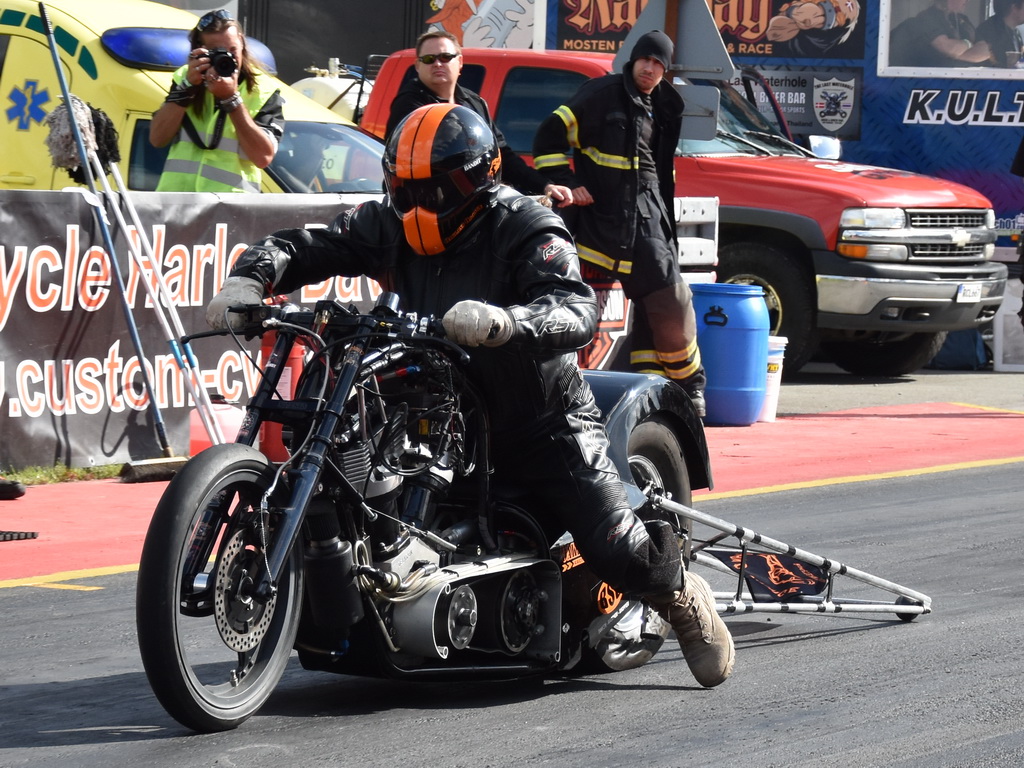 Horst Pedersen was the quickest of the four V-rod Destroyers in the topgas class. 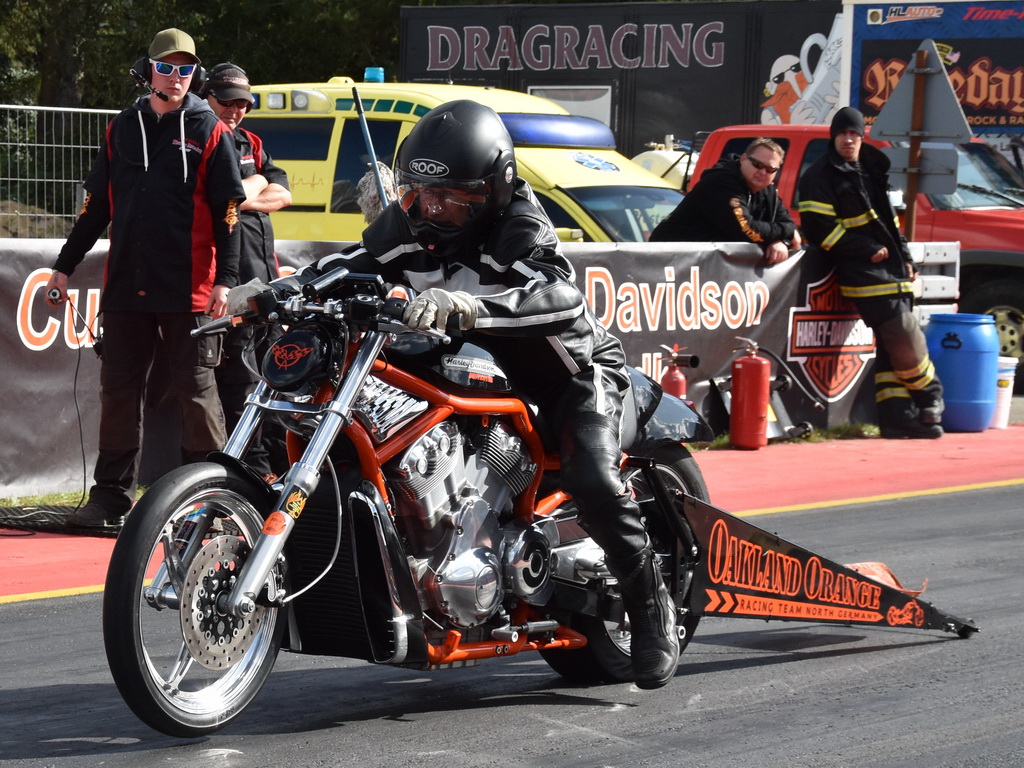 And also went quicker then his team mate Hanssen.

Sascha Brodbeck broke the gearbox during his first pass, so it was over early for him. 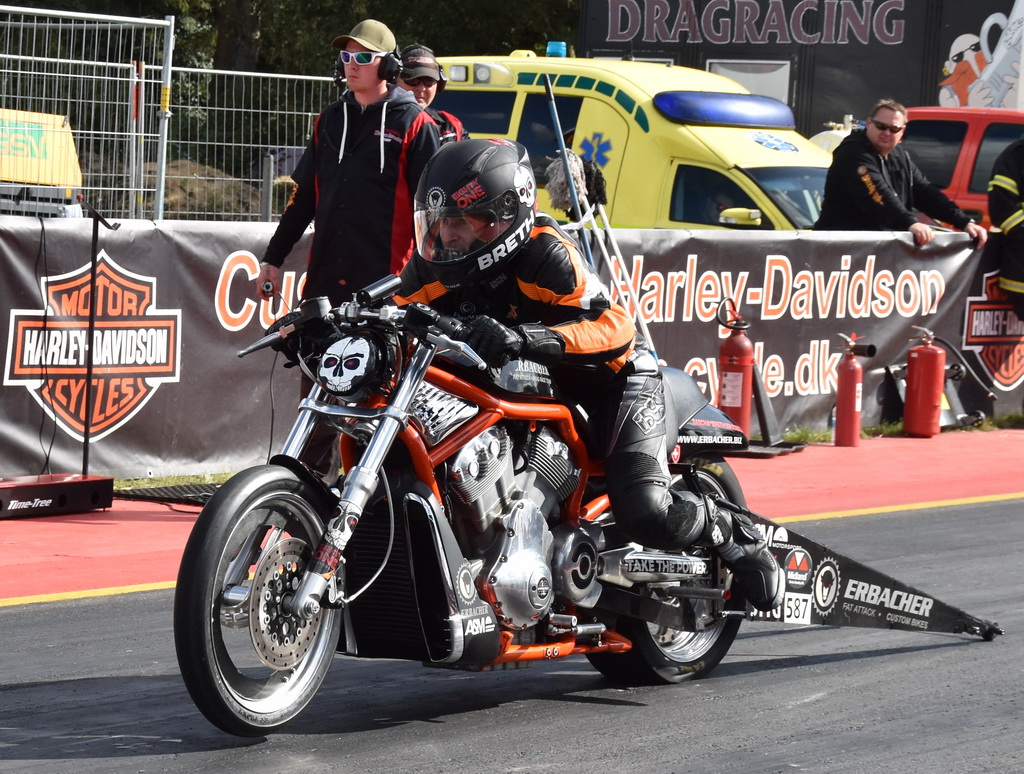 It was Martin Buehler's first visit to Mosten. Martin is (still) a slow starter, but went over 200 Kmh in round one. 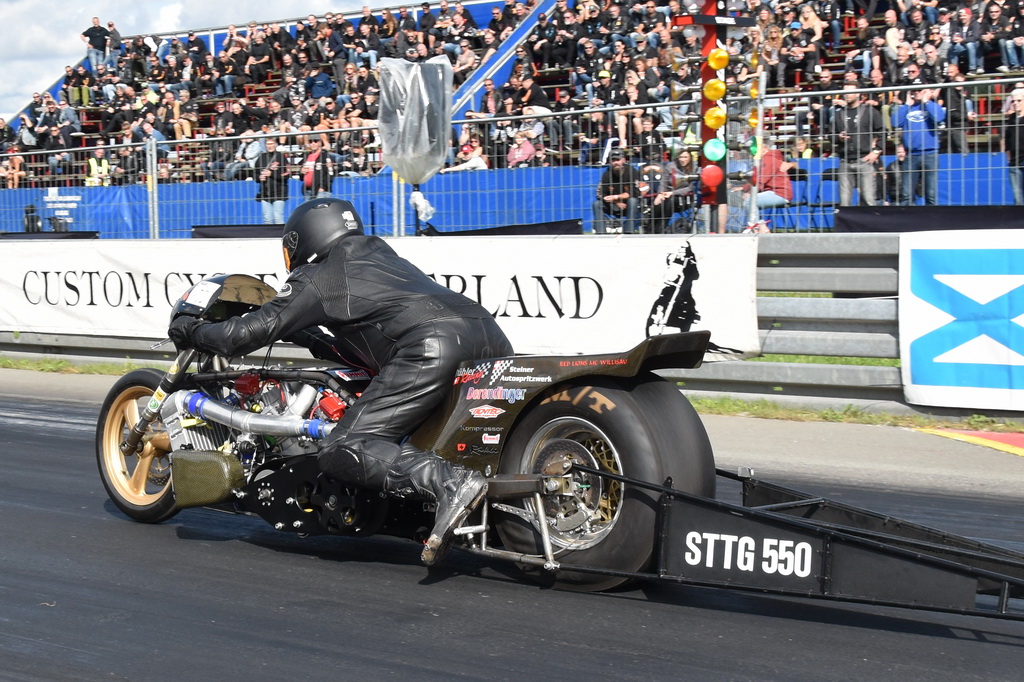 His helper got goose bumps while watching the old Triumphs in the old school class.

Cord Albers was assisted by his team mate and friend Gerd Caspari. 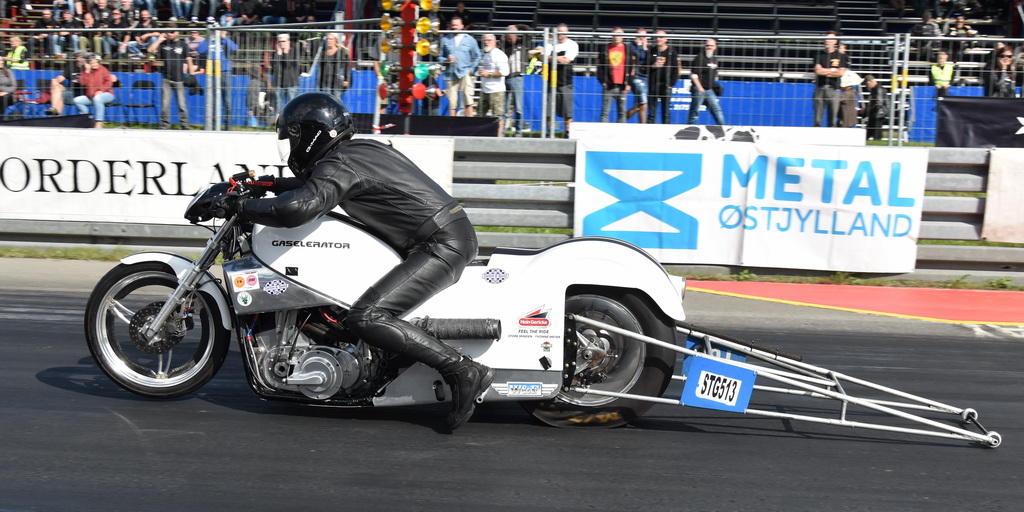 Cord had won the race at Drachten, was out in the first round at Hockenheim, and got on top of the list after round one at Mosten.

Herman Jolink had taken the past two races off, and had arrived early at the track. 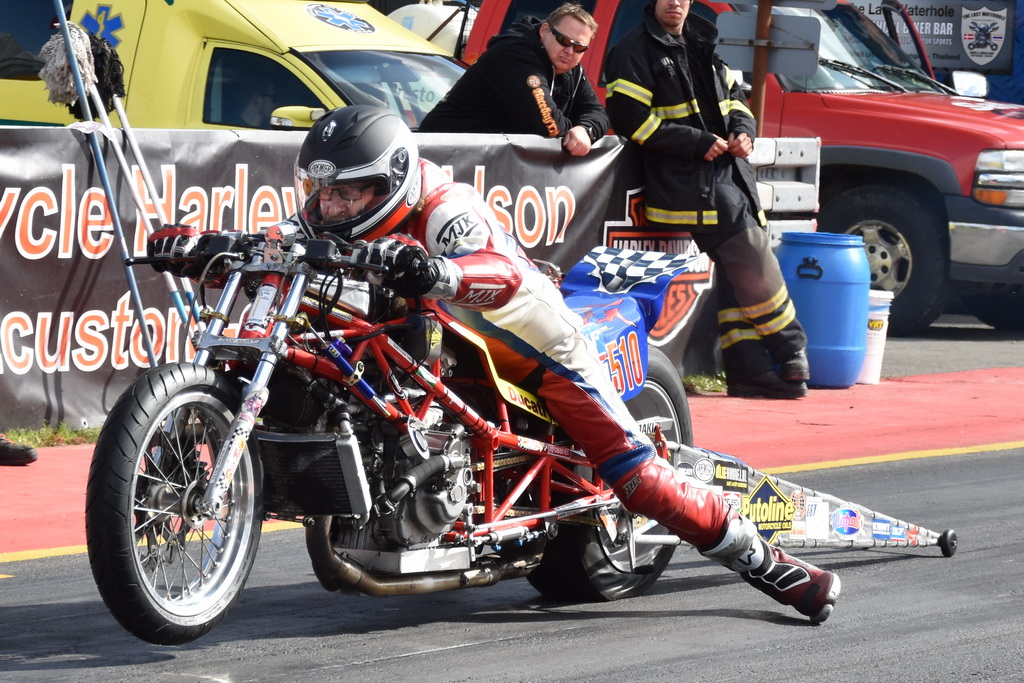 Jolink and his Ducati were at place #2 after round one.

Peter Niklas and mechanic Michi had put another engine in the turbocharged Honda after it broke down at Hockenheim, so Peter could race it again at Mosten. 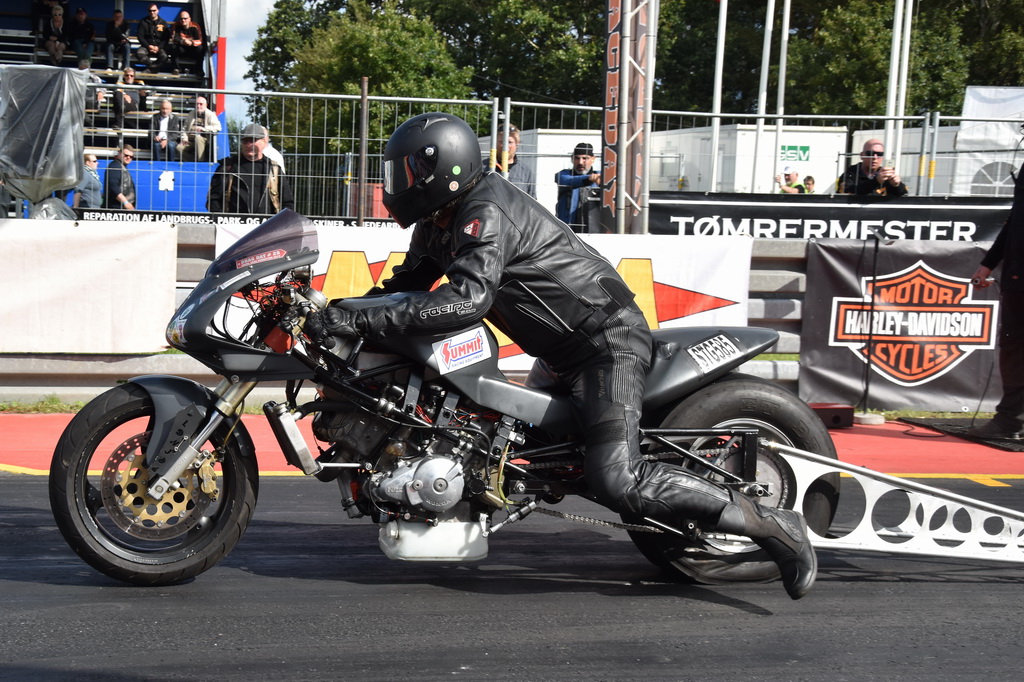 Peter's bike hesitated at the start. The crewchief thinks it needs a better warm-up.

Olaf Menzi overcame a troubled start and shut of early, but managed to get to the fourth place after round one. 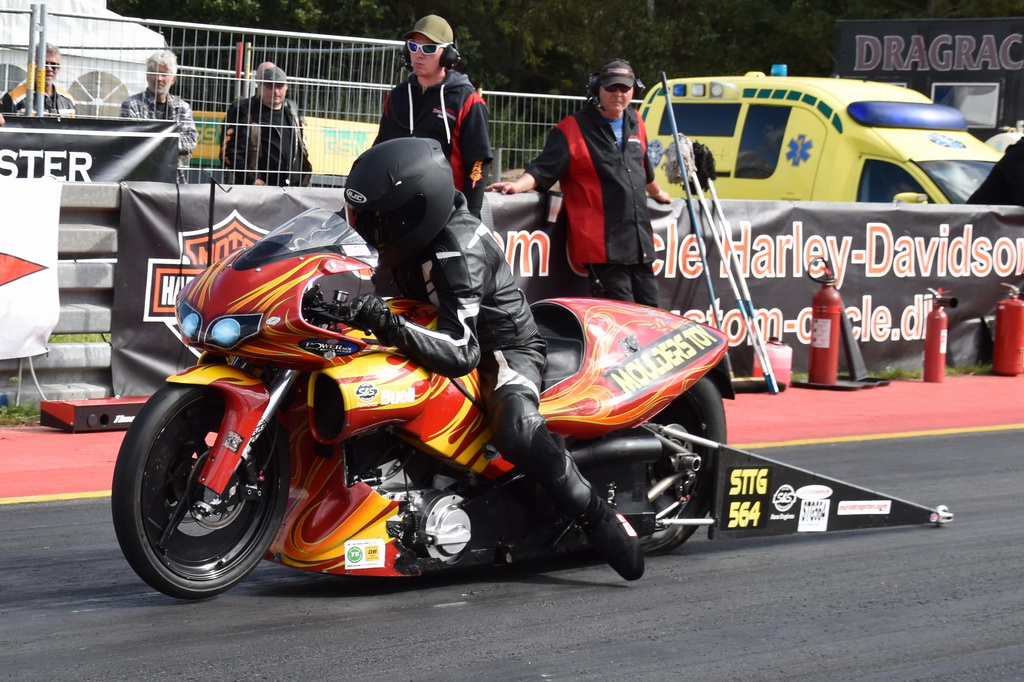 Chris van Nimmen had wrecked his twincam motor in the middle of the season, and now has a Delkron fourcam in his Hawaya frame. 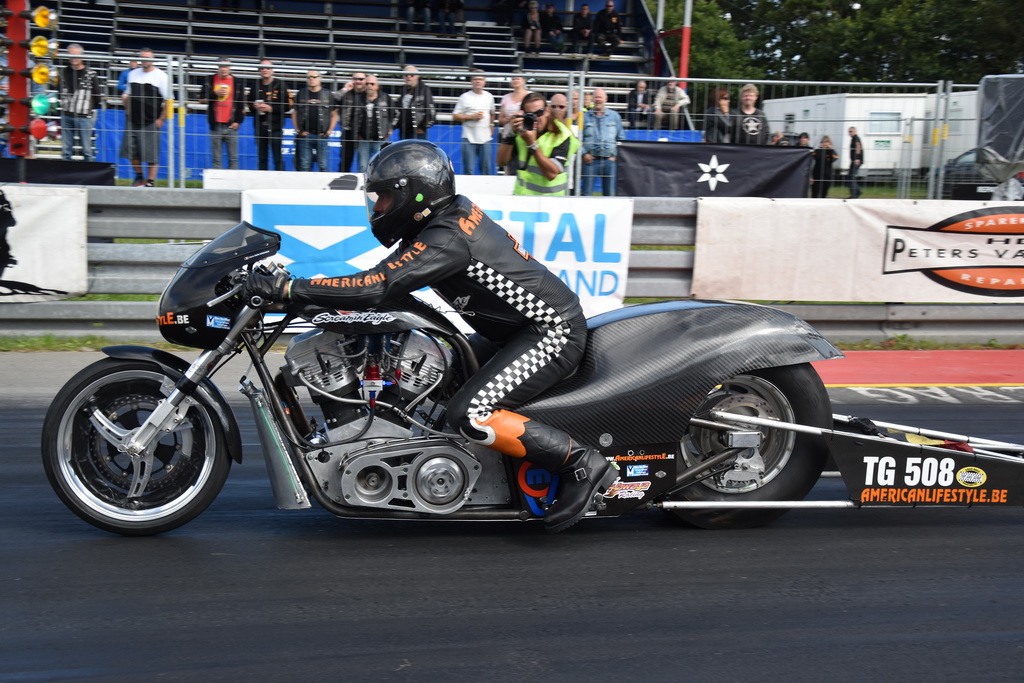 Sven Ole Schleichert had attended all races in the serie so far and much fun at Hockenheim. 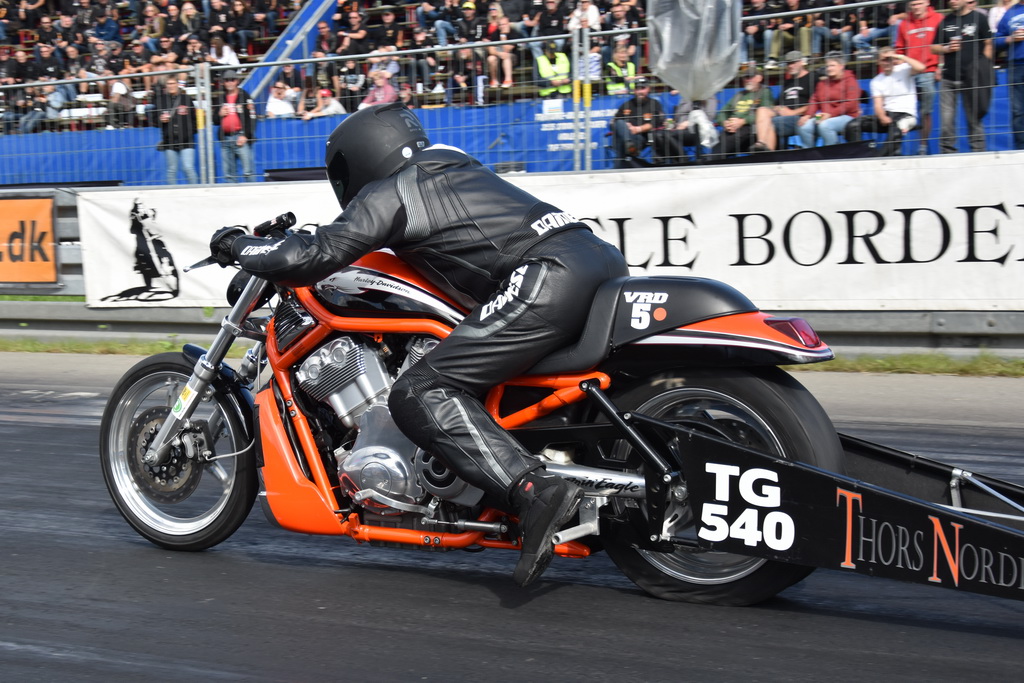 Schleichert made it into the top eight after round one.

For the third race in a row there were problems for Frederik Schack. 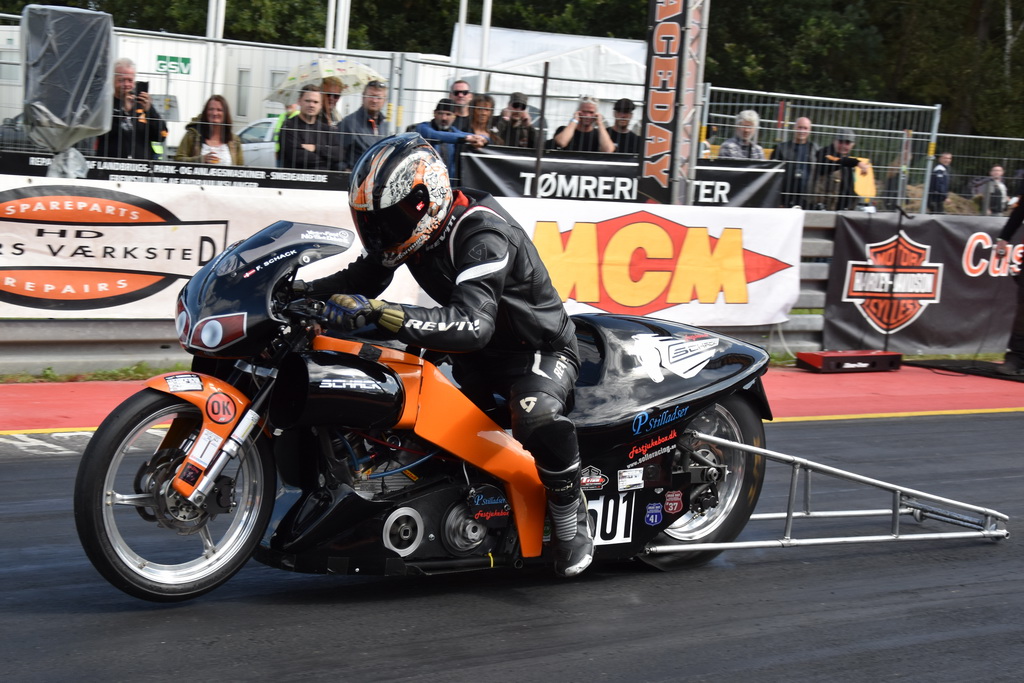 The usual launch. Then problems shifting and Frederik cruised to the end.

Team Jensen had made some adjustments to the frame last winter, and Anders made a nice and straight rolling burnout. 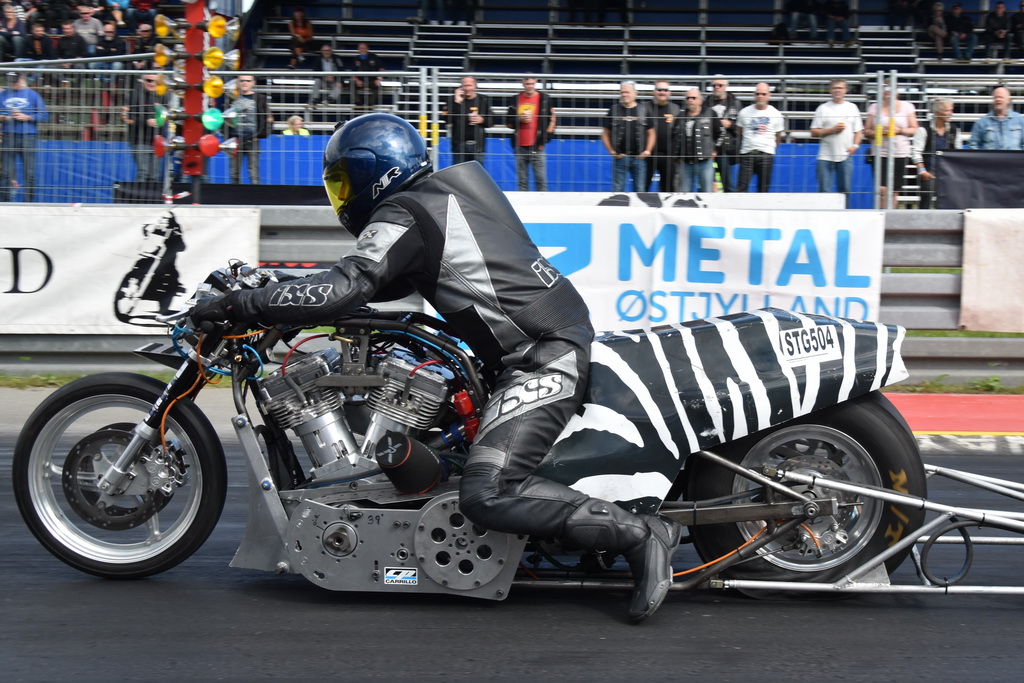 They were in the top three after round one, but not happy with their E.T.

Jörg Lymant is the leader in the championship after Hockenheim, and he smoked his tyre in round one. 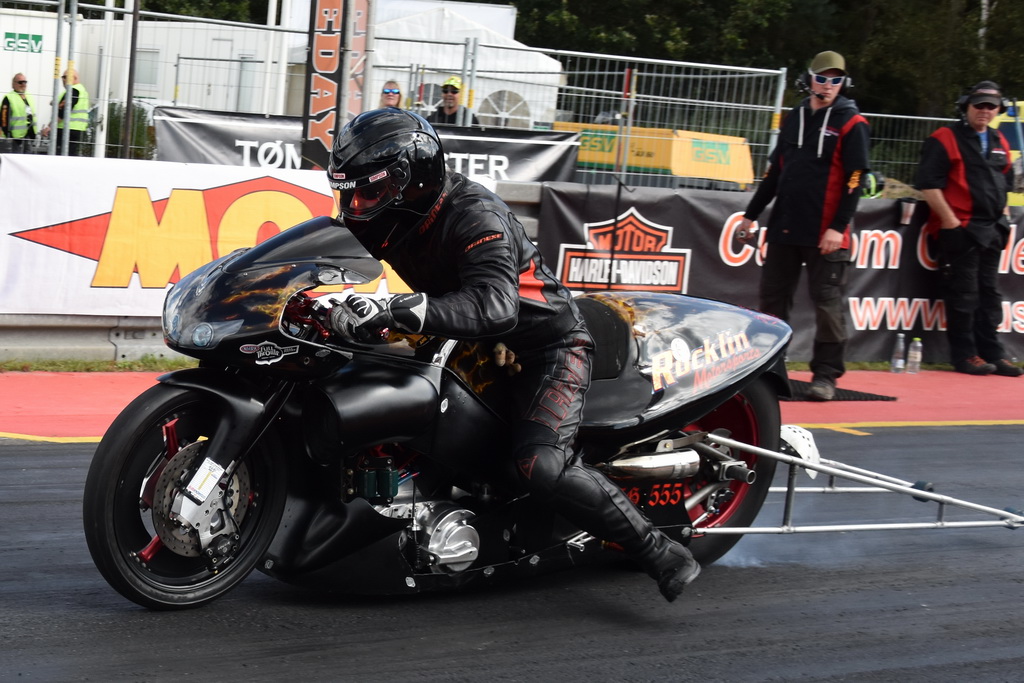 Dirk Waterschoot was the last topgasser to run that morning. 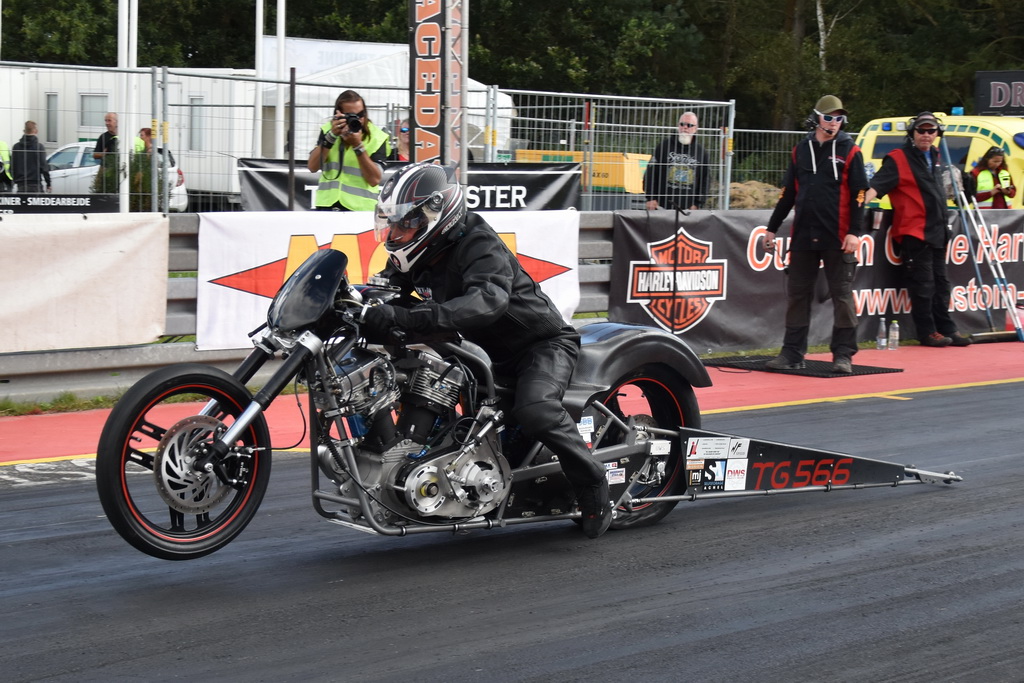 Results of round one:

So, fifteen topgassers made a pass that morning but nobody did a "four". Albers and Jolink were best at judging the conditions. A few more guys came out in the afternoon.

Joerg Braune, again first in line, was sliding sideways at the 60-foot mark in round two. 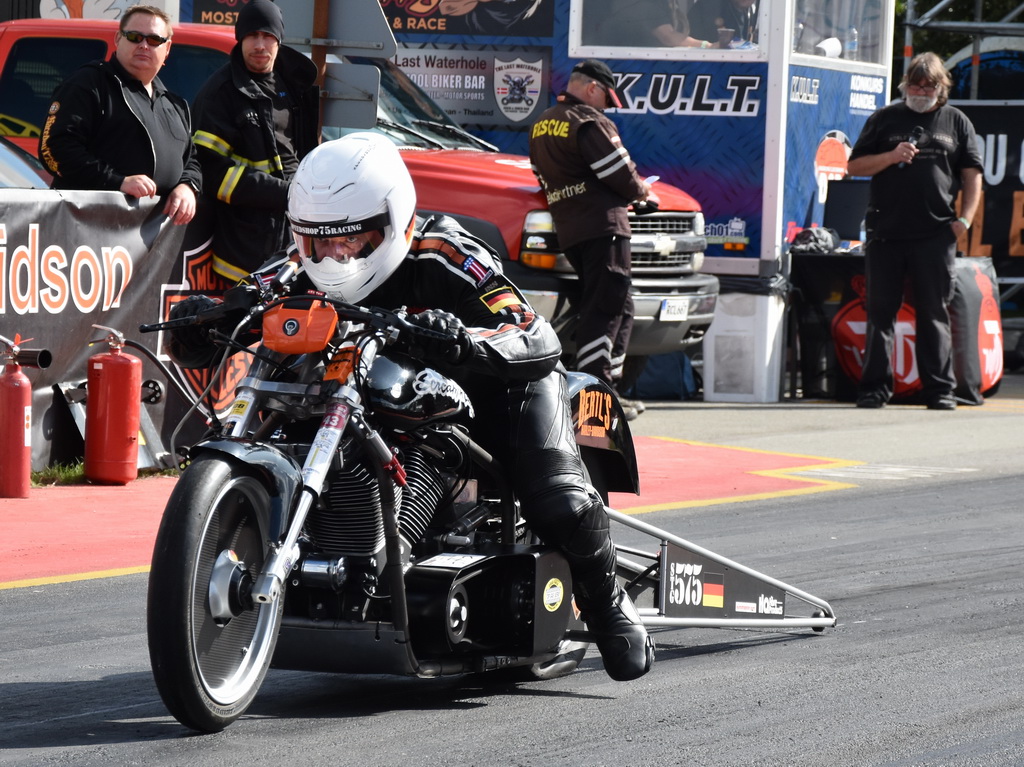 Joerg improved his time abit but would drop a few places on the list.

A big improvement for Dirk Waterschoot, who was assisted by Marc van den Boer's crew. Marc's engine had failed during the morning warm-up and was on display in the pits.

Janek Severa had spend the morning wrenching and made his first pass at Mosten on friday afternoon. 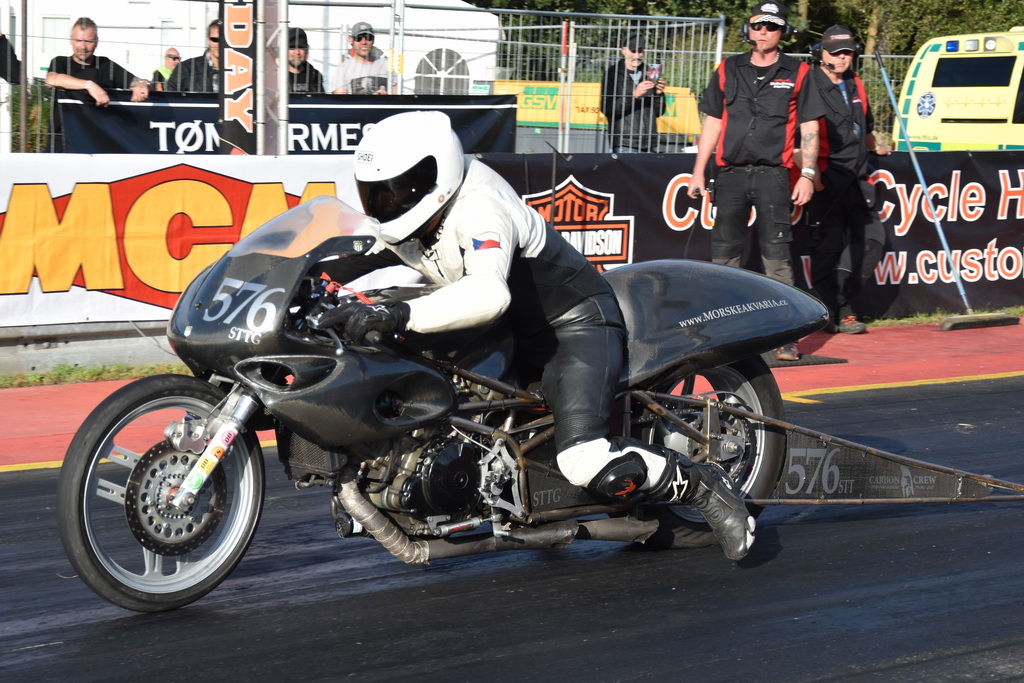 Jan Malmberg could not get his bike started on friday morning, and he spent some time checking the wires of his double blown bike. And had it running in the afternoon. 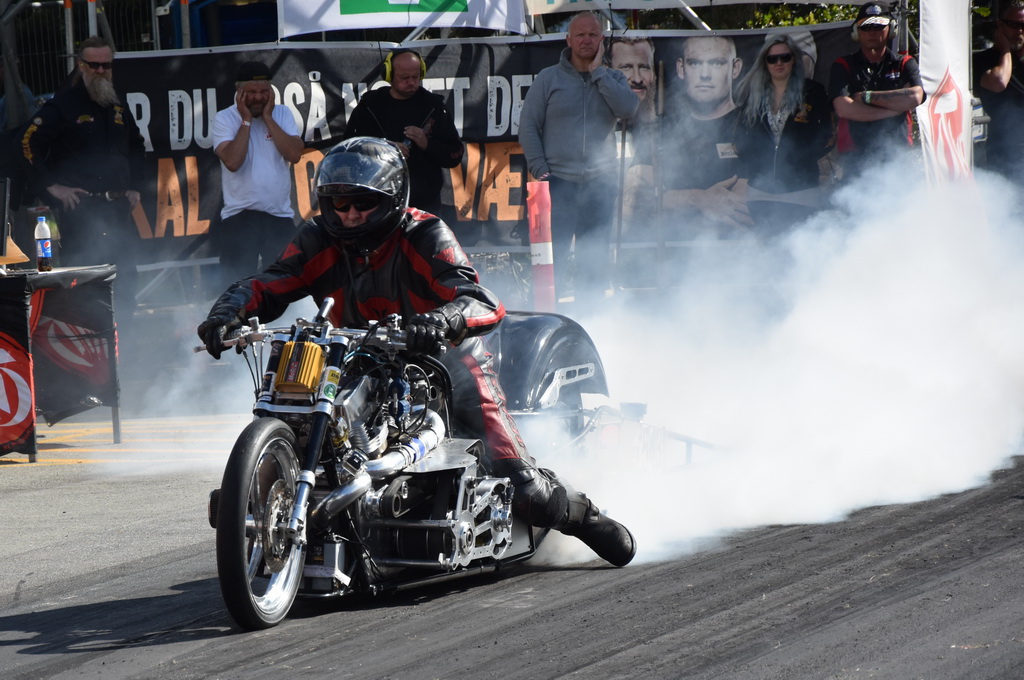 Malmberg had set a new personal best at Hockenheim, but now stayed far from it. Malmberg's friend Mats Larsson had also brought his bike and had it scrutineered. Just in case...

But team Sweden could not get Larsson's bike to run and it stayed in the pits. Same for Bernd Foit's bike, just like at Hockenheim.

Maik Krueger came out for his first pass on his V-rod. 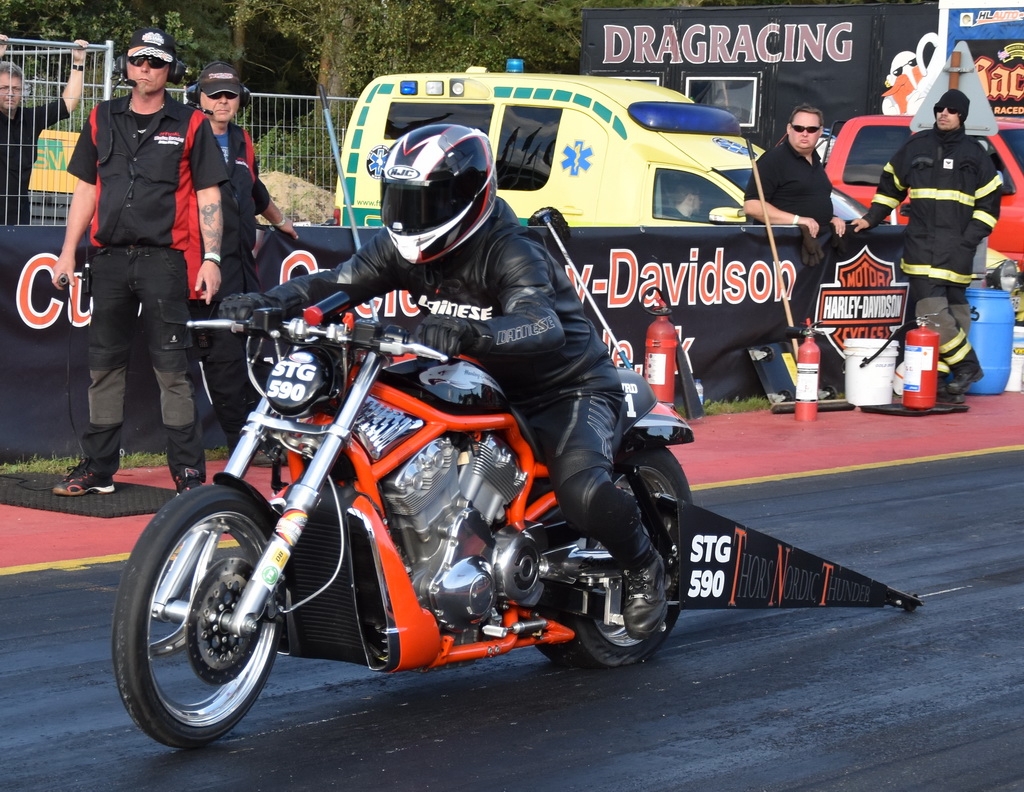 A great 60-foot by Schack but off throttle early. 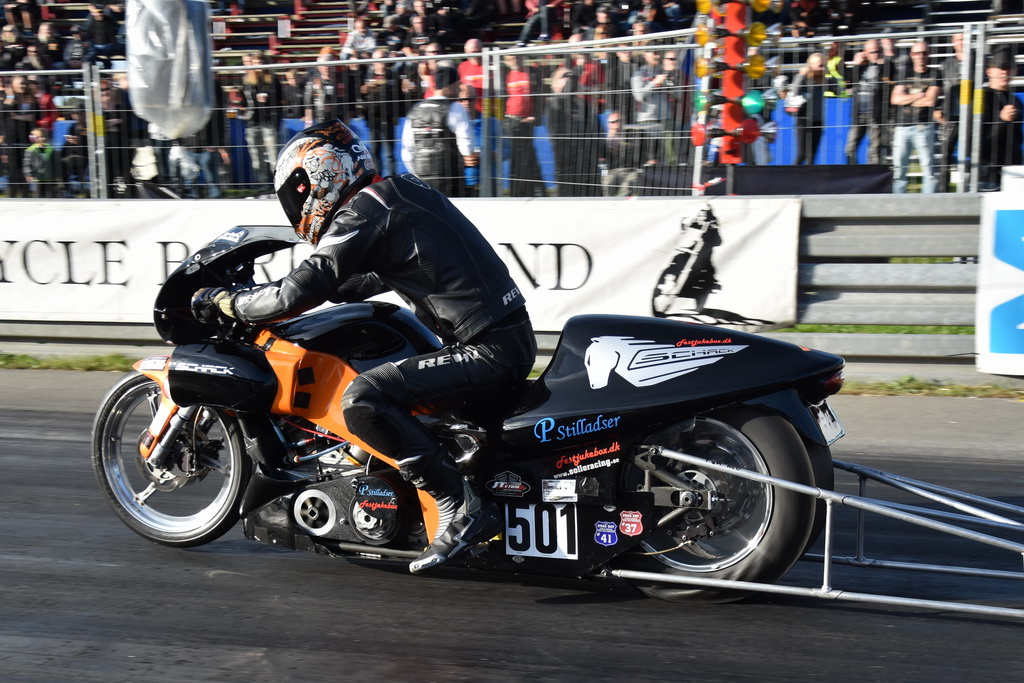 Herman Jolink got his 60-foot down and did better then on his first run. But Schack and Lymant passed him in the list.

Cord Albers improved to 5.03 but Jörg Lymant was just a split second quicker and passed him in the ranking after a far from perfect run. 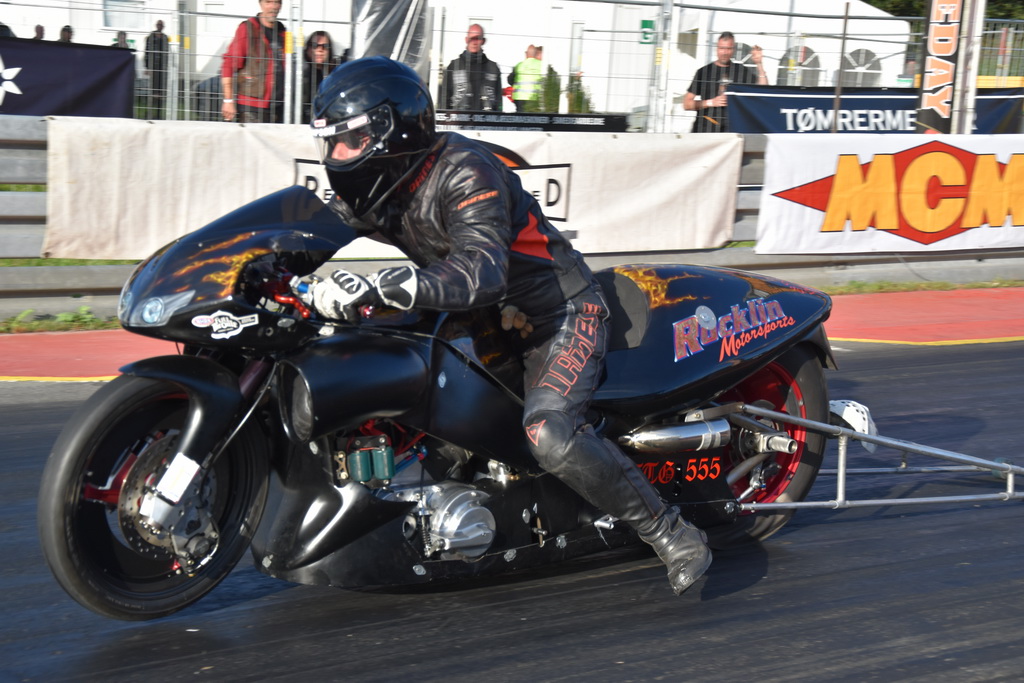 Results after round two:

Conclusion after the first day: Only three G2's were able to do better then Jolink on his Ducati.

Saturday morning, one last round to try and get into the top eight and stay in the race.

Also an improvement for Joerg Braune, now in the fives.

Peter Niklas' bike stalled after the start, and Peter almost hit a hole in the dummy tank of body, out of frustration.

Van Nimmen. Schleichert and Pederson also slightly improved thier times but were pushed down on the list by Braune and Malmberg.

The Eliminations: Both favorites, Lymant and Albers put a "four" on the clock with a slight advantage for Lymant.

The two riders from Denmark were unable to pass the finish line. Both riders from Switerland also got eliminated. Menzi became the best Swiss rider and did a great reaction in his last run. Joerg Lymant increases his lead in the championship over Schack.

And worries about Malmberg's gearbox at team Sweden.

Results of the first round of eliminations:

Semi Finals: A hesitation for Lymant's bike at the start, and a 5.16. Next Cord Albers improved his time again, and was certain of the finals. Could Malmberg beat Lymant's time? Jan had already run a 5.16 in the previous round, but the bike would not shift when Jan was ready to do his burnout. So he shut it off. Then Jolink, certain of place #3 at Mosten, did another almost identical copy of his previous runs.

"German Undertaker" Cord Albers saved his best for last. After adjusting his wheelybar, he did an 4.7 with a great 242 Kmh. 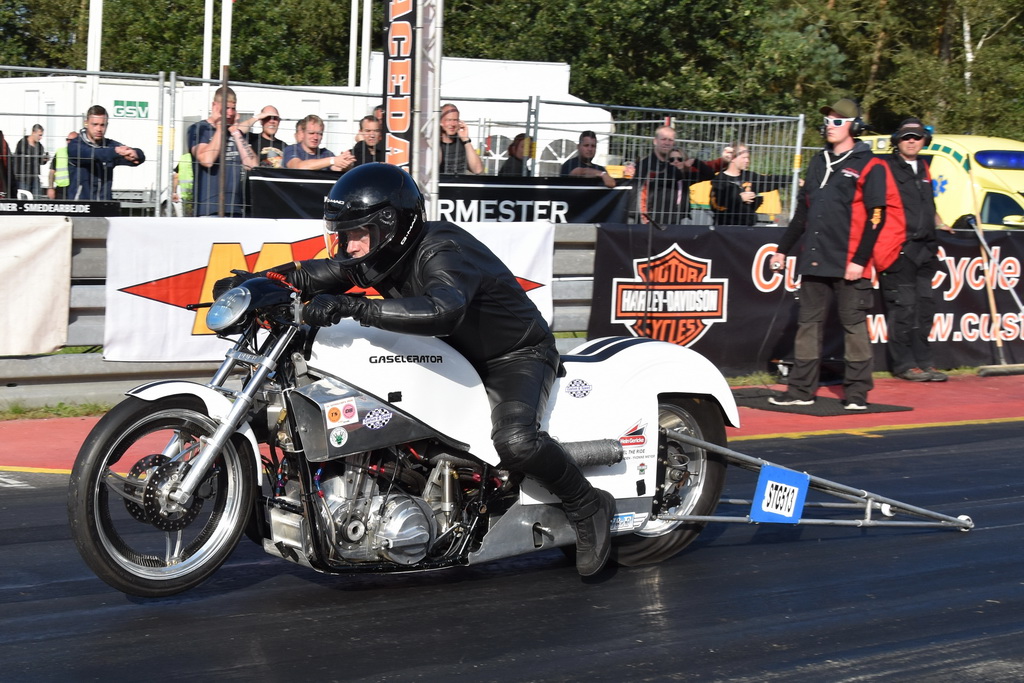 Joerg Lymant also did his quickest time of the weekend, but by far not good enough to beat Albers. 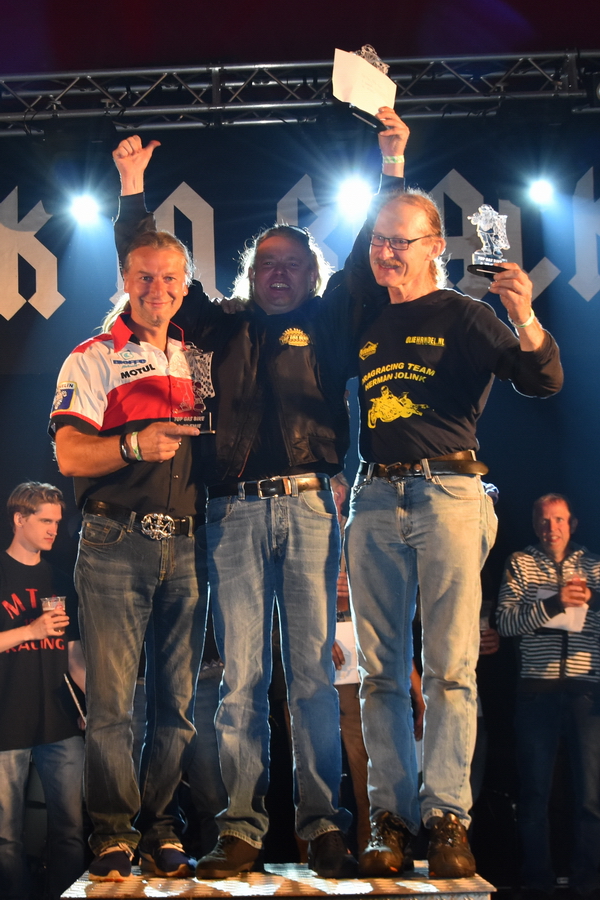 Many thanks to Hitz, Holger, Morten, and all the others at Mosten MC. See you next year!

Last race of the euroserie is at Drachten, but it's still uncertain.

More news about that in a few days.