First race of the year

For the tenth time in a row a drag race was held in Hoscovice in the Czech republic. There were two more drag races races on the same weekend in Europe, and some topgassers take a seat in the V-rod destroyer cup this year, so we had only five racers in competition on the seasons opener. Homeboy Roman Sixta was there with his Honda, Herman Jolink from Holland with his Ducati, and Frank heitmann, Peter Marz and Mike Brüsch from Germany with Harley-Davidsons. Some teams had already gone to a `test and tune` with the result below. 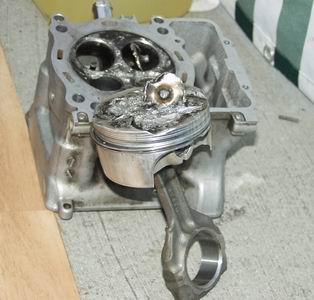 But with the damage repaired in time, Roman Sixta grabbed the #1 spot at his first shot, and never gave it away. He started off with an 8.8, and found the right setup to take the numbers down. 8.63 sec. in round two was a new personal best that only held for a day! Herman was second with 9.06 on Saturday evening, but Frank Heitmann spoiled his fun, racing 8.79 seconds in the final qualification round on Sunday. Herman went into the eigh second zone with 8.9 after adjusting the clutch. Mike Brüsch, who didn’t “test and tune”, suffered electrical problems all weekend, and failed to show up for his quarter final race against Heitmann. In an eight field drag race with five racers, the number two gets a bye run in the semi finals, so Heitmann only needed to leave the startline twice, to be in the finals, but to shut off early, is not in the nature of a drag racer, so he went full throttle. But his gearbox refused, so he could not make the last round. Roman Sixta also gave it all in his bye run: 8.5! Peter Marz was happy with a new personal best of 9.1 on the ex-Rudiferia bike, but his crew (Vermaas&Weimar) was not impressed. 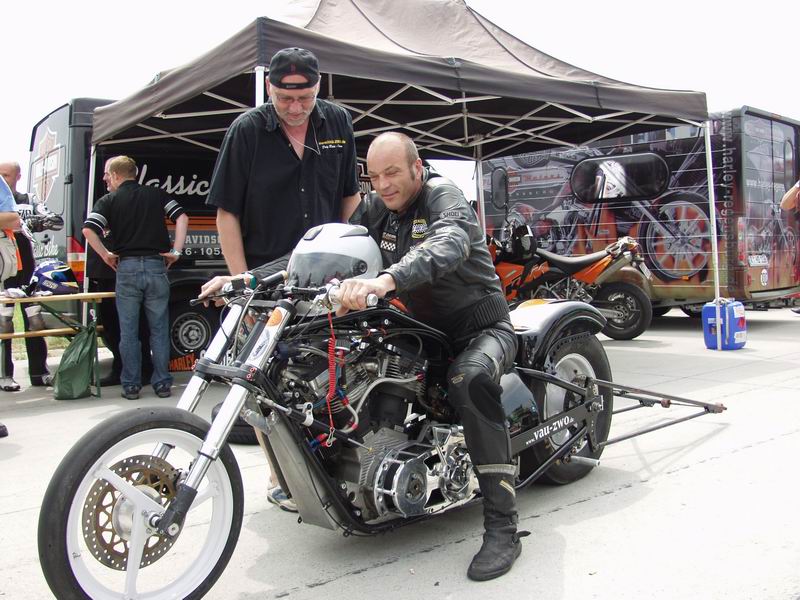 Peter was up against Herman Jolink in the quarter finals, he gambled at the start light, but left way to early and red lighted. Herman then met Roman in the semi finals, the supercharged Honda was way to fast for the 999RS, another 8.5. With Heitmann broke, Roman got another free ride, but kept going faster, 8.47 and over 250 kmh! 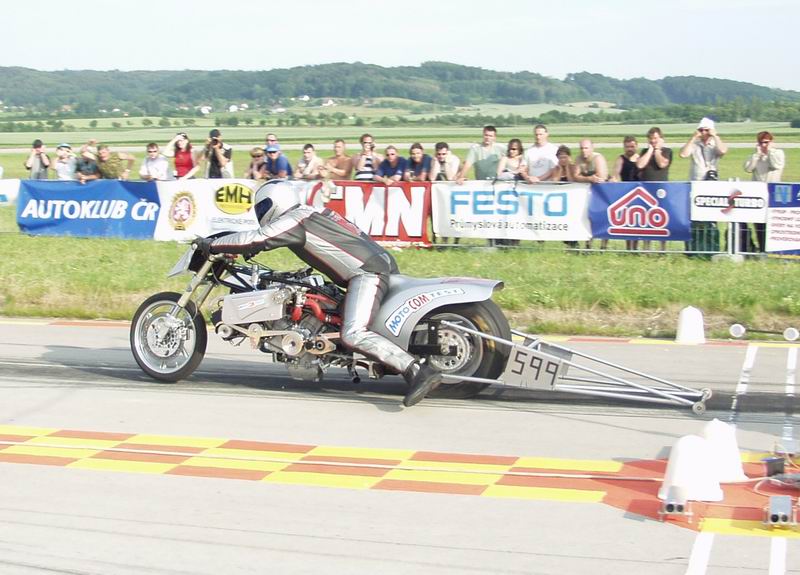 The man broke his personal best seven times in one weekend; four times his best time, and three times in top speed! And speed is horsepower. For the first time in the history of the euroserie a Honda now leads the championship. 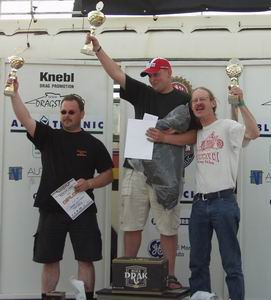 The first V-rod destroyer cup race was won by former topgasser Wolfgang Dorsch. Our champion Axel Seifert was out in round one. During the long oildown caused by Mr Ponca, V-rod racer Merse could nor resist to sit on Marz's bike, and confessed: It's more fun to race a topgasser.

Many thanks to Knebl Drag Promotion for the great race and the delicious goulash.
We really missed Otto Bauer, and hope he gets well soon.

Next race is in Luckau near Berlin.

Stefan Winter, the organiser of the Turtmann race will be in Luckau, to sign you on and collect your entry money, so have your papers ready!