Race #5 in the Euroserie:The 26th NitrOlympX at Hockenheim, Germany.

The biggest circus of the series on the "Rico Anthes Quarter Mile". 250 entrees, a huge crowd, FIA cars and UEM bikes european championships (these classes race at fixed times, pushing the other classes to the side, in case of a delay in the time scedule), a "nightshow" on saturday evening with lots of pyro-technical effects and fireworks by the Top Fuel dragsters and Jet cars. Big daddy Jerry Lackey and his crew had their hands full and did the best they could to give everybody a fair chance.

In the Supertwin Topgas bike class there were fifteen racers on the entry list.
Eight of them are members of the euroserie topgas racers club.
Four riders from Sweden came over to play with them.
Mats Lasson, Jan Malmberg , Anna-lena Asplund and Andre Stefan were present just like last year. Then there were three guys from the Netherlands: Harry van Schie, Lando Beugelsdijk and Herman Jolink.
And four racers from Germany: Bernd Foit, Christian Bruhn, Bernd Niessen and Joerg Lymand.
From Belgium it's Criss van Nimmen and Marc vanden Boer.
From Norway came Kirstin Hegre, I think she's the first Norwegian to compete in a Euroserie STTG race.
And the honour of the Czech republic was defended by Milan Kolacny and his team. 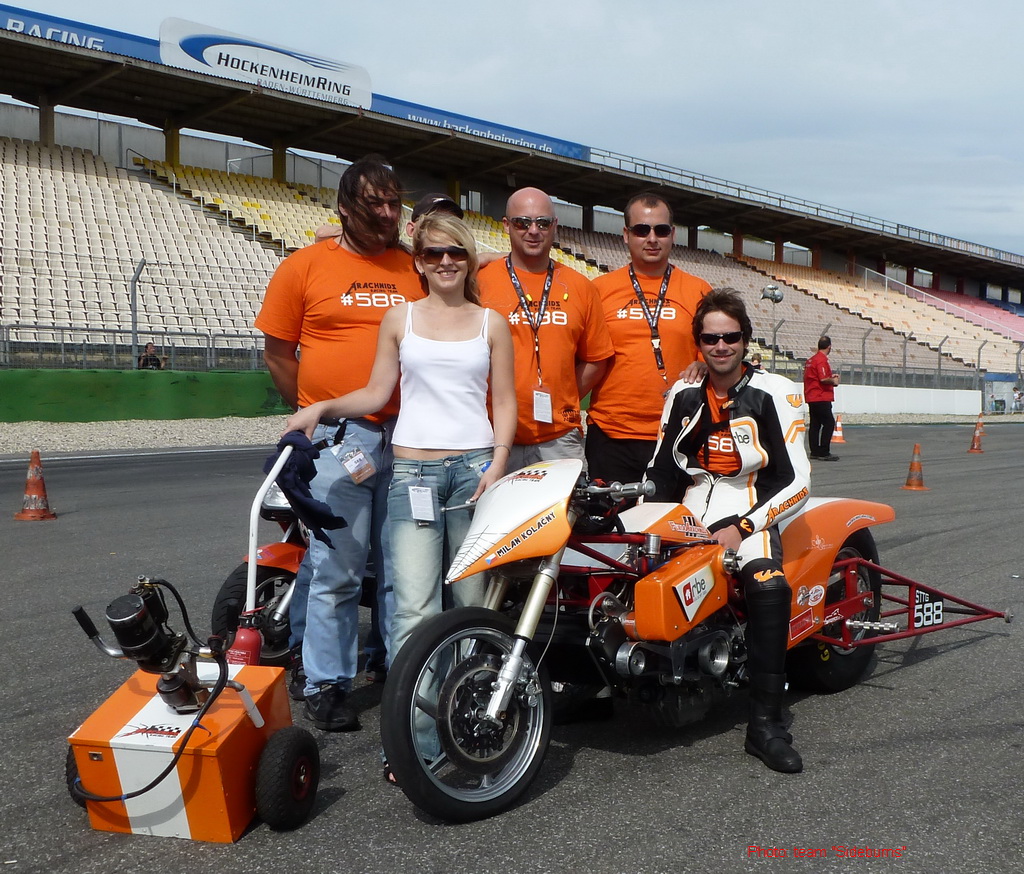 On the above picture everything look bright and sunny, but the weather played an important roll at the weekend, like it did on lots of races so far this year.

There was only room for eight topgas riders in the dragrace on sunday, so the qualification rounds on friday and saturday were extremely important and seven racers would be out of competition on saturday afternoon.
Anna-lena and Andre Stefan were already very quick this year at the new track at Tierp (Sweden) they both did seven second passes, and met in the finals doing 7.85 sec side by side! Anna-lena has good memories of the track as she did her first "seven" two years ago in Hockenheim. Harry van Schie did a 7.9 in Hoskovice on the ex-Job Heezen blown Harley, 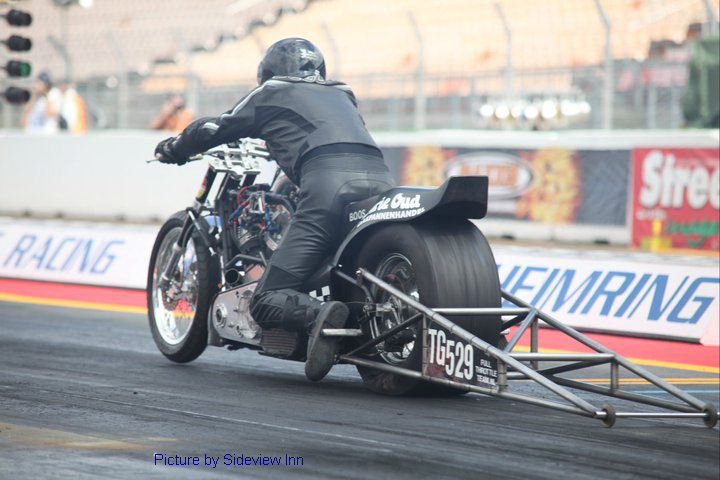 ...but Harry was not able to do it under eight seconds more then once this year. Milan Kolacny did a new personal best of 8.25 last race in Drachten on the ex-Roman Sixta supercharged Honda and is very consistent. He is chasing Herman Jolink (Ducati) in the championship, and Herman has a pb of 8.27 sec on the quarter mile. So both guys needed to perform at their best to get into the flow chart and pick up at least some qualification points. Bernd Niessen was eager to race the Alu-Buell again, after his crewchief Gerd Caspari was in the saddle for two races, to test the functionality of the new blower. Here's Bernd at the burnout: 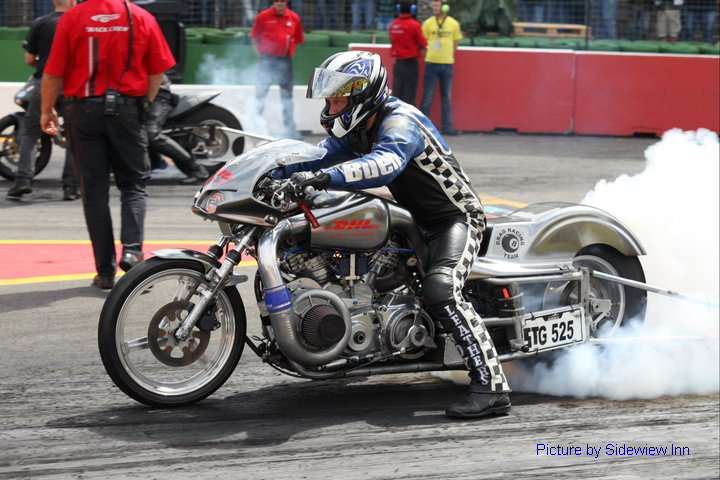 Marc vanden Boer also fitted a blower to his V-twin motor and build a new frame around it last winter. So far the tests went great, he could be the "dark horse" of the weekend. Criss van Nimmen had a new engine in the frame and still needed track time to set it up.
Last year the turbocharged Honda Sp of team "Sideburns" supprised us with an 8.5 second pass by Peter Niklas. This year Christian Bruhn is riding the bike, and is in third place in the point list so far. With Harry van Schie being able to pass him this weekend, Christian needs to be fast and keep the engine alive at the same time. Peter Niklas entered the superstreet bike class this time, riding his Ducati. Lando Beugelsdijk did a new pb of 8.5 sec. last race, but only just began tuning the bike now the Gremlins are out, and still can make a big step forward. Joerg Lymand fitted a wheely bar to his superstreettwin bike and joined in. Our friend Peter Marz was busy on thursday, technically inspecting all bikes.

Friday morning first round was sceduled at 10:03 in the morning, just six minutes ahead of the FIA and UEM classes, and a second chance at half past two in the afternoon, again just ahead of the FIA-cars and UEM bikes, that were in the "Zeitplan" for one and a half hours. So it was clear that the topgassers could be spending lots of time in the line-up, in case of the slightest delay. Rain prevented an early start on friday morning, but it was dry at noon, and at about half past two, the topgassers went to the startline for their first attempt. Best results: Anna-Lena Asplund 8.091/225.23 (here she is the burnout). 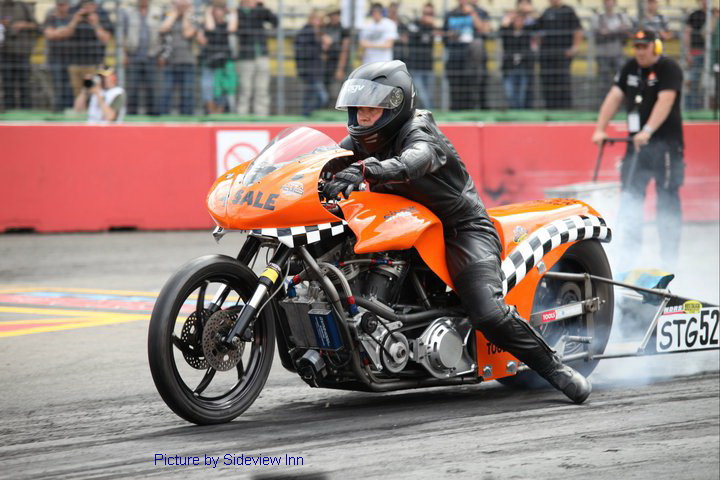 Watch STTG qualification round one :

First place for Anna-lena was not really a supprise. She probably shut off early, looking at the low top speed.
A big gap between her and Bernd Niessen. Great top speed for Bernd. An indication of the potential of the bike. And a lot of valuable data collected to further fine tune the motor.

Then the FIA and UEM classes claimed the track.

Our former champion Job Heezen is competing in Supertwin topfuel class for his fourth year on the ex-Ton Pels bike. Job just got back from Norway, where he qualified #4. Now he took the lead in first round with 6.697sec at 350.08 kmh. A new personal best top speed, well done Job!
The 2011 UEM-STTF championship point list leader is Per Bengtsson from Sweden. 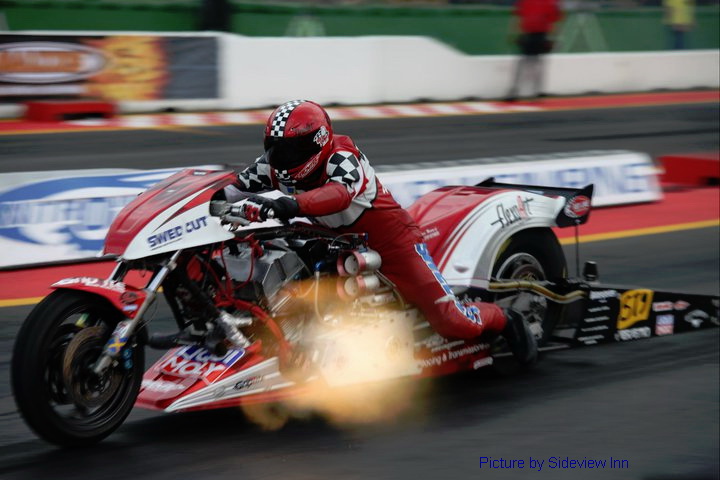 He only needs to qualify to also take the lead in the "All Time Cumulative Points Totals for UEM Super Twin Top Fuel Bike".
Per's first run resulted in a 6.9, with an early shut off. Good for place number six so far. Czech rider and also former topgas champion.

Roman Sixta, also former topgas champ, qualified # 8 with a 7.6, but needs to step up if he wants to stay in the field on sunday. 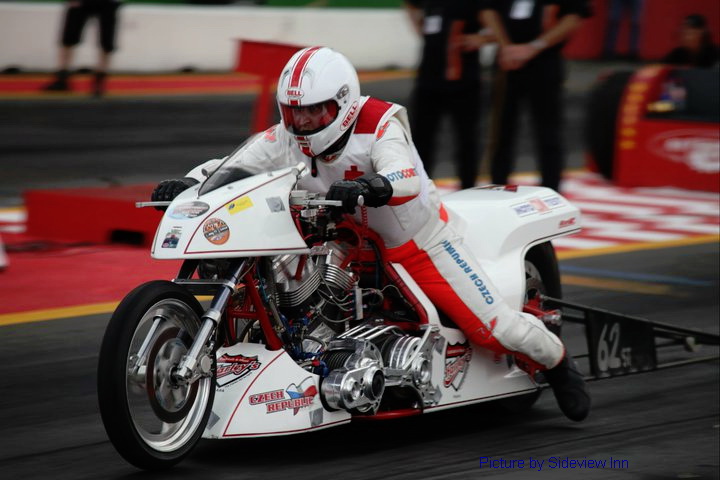 In the Top Fuel Bike class Peter Svensson from Sweden shot 6.111 straight from the trailer after being absent in Hockenheim for sixteen years. Peter did a row of 6.0 second runs in Tierp Arena, Sweden earlier this year and was very motivated to do a 5 second pass. Here a picture of Peter at the burnout: 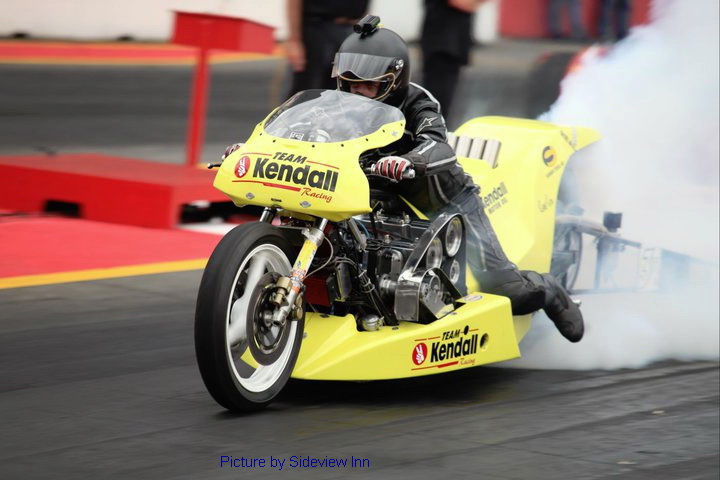 Jaska Salikari from Finland was a busy man. He entered in both the UEM supertwin and topfuel class with two identical homemade bikes.
At his home track in Alestaro, he did a 6.39 six weeks ago, during the quarter finals with the supertwins. His first attempts at Hockenheim resulted in a smoked tyre and a broken primary belt. So some adjustments to be made.

Our former champ Jesper Thiel from Denmark is very succesfull in The UEM Pro Stock Bike class this year. Jesper and his team mate Rasmus Olesen were attacking the european speed record last week in Norway, when rain spoiled the fun. They get competion from Fredrik Fredlund (Sweden) and they are all trying to write history with a six second pass. Rasmus took the lead after round one with a 7.123 doing 303 kmh. with Fredrik close behind. Gert-jan Laseur from Holland, also former champ in our class, qualified fifth with a 7.53.

Just before the 19:30 curfew, the UEM- Bikers got a second chance. Jesper Thiel did 7.23, stayed in place number four but did the fastest run in Pro Stock bike in Europe ever: 309.44 Kmh. So if he can back it up, it's a new speed record. Go, Jesper!

Per Bentsson moved up to place # 3 in Supertwin Top Fuel with 6.79sec and Jaska pushed Roman out of the top eight with a 7.5. Job Heezen still in the lead.
Sceduled for saturday were two more rounds of qualifications, one at ten in the morning, and the last one at four in the afternoon, this time just after the FIA and UEM classes. But that day also started with wet track so a delay of about an hour to begin with. So again the topgassers had to wait untill the afternoon for their second round. 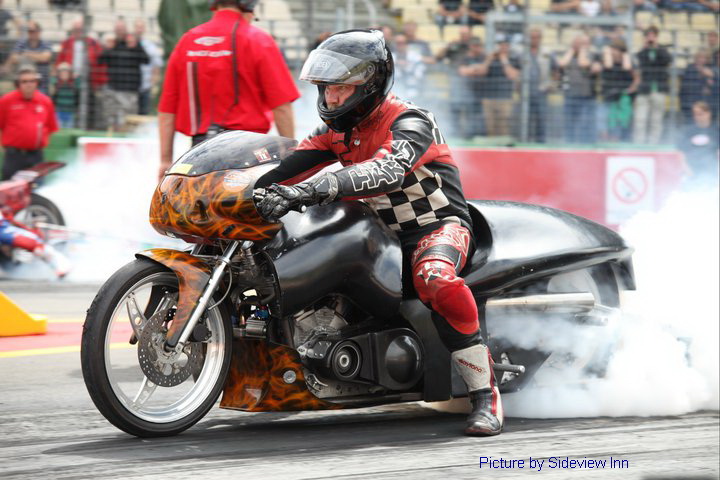 Lando moved up passing Harry van Schie (8.59)
Milan Kolacny: 8.64, place #6,
Herman Jolink: 8.67, #7.
And Criss van nNimmen down to place #8 with his earlier 9.0.
Christian Bruhn made it to the 9the lace with 9.5
Marc vanden Boer managed to repair the motor, but it was set up way too lean, resulting in an eleven second pass, and last one on the list. 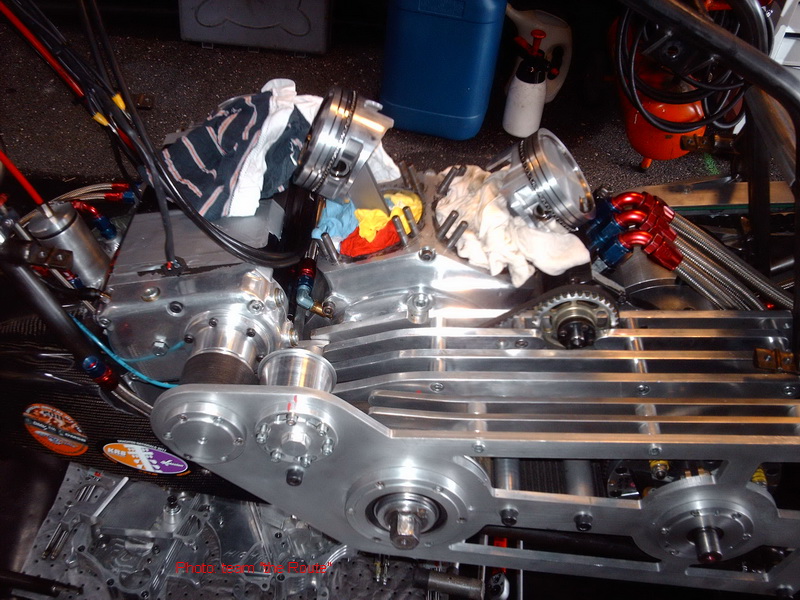 Half past three it was FIA-UEM again , and with the nightshow coming up, and some eliminations planned before that, the topgassers that were qualified could concentrate on sunday.

In the fourth round of Uem qualifications Roel Koedam from Holland used his last chance to enter the ladder, and took the lead in STTF with a great 6.562/320.72 on the blown Zodiac Harley. I'm sad to hear the news that Roel annouced to end his drag racing career after this season. 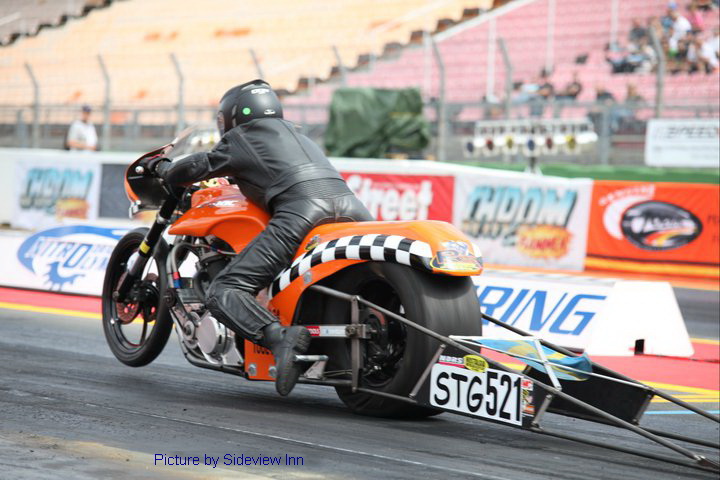 In the afternoon a lot of rain came down, and racing was stopped untill a quarter to five. A huge Peterbilt jet truck helped to dry things up, but did not have the proper brakes for the job and was not used to riding in deep water:

Then the UEM-bikes ran the semi finals. In Prostock bike, Jesper and Rasmus advanced to the finals, both doing 7.1. Jesper earned enough points to win the 2011 championship in prosteck bike. Well done, congratulations Jesper!
In Supertwin Topfuel, Per Bengtsson and Roel koedam were already out in first round, Job Heezen beat Acka Riemer and went to the finals, were he was up against Samu Kemppainen.
Another great pass by Peter Svensson in top fuel bike. 5.99 sec and 372.78 kmh. Another five, and the backup for the new european top fuel bike top speed record (375.55) Peter was to meet Steve Woollatt in the finals, who beat Petri Paljakka with a 6.43.

Then time ran out and the six o'clock cerfew put everything to a halt.
Herman Jolink still leads the championship, but Milan Kolacny is closing in on him.
Christian Bruhn still in third place. Lando Beugelsdijk passed Harry van Schie and is now close behind Bruhn and already skipped two events.
Two more races left to battle it all out.
This was the third race spoiled by rain for topgas this year, let's hope we're lucky for the rest of the season.
The next race in the series is in Drachten, the "Dutch finals", where Milan Kolacny has the biggest chance to be the winner of the open Supertwin Topgas championship of the Netherlands. It's a three day event, so lots of track time if the weather allows it. Hope to see you all there. 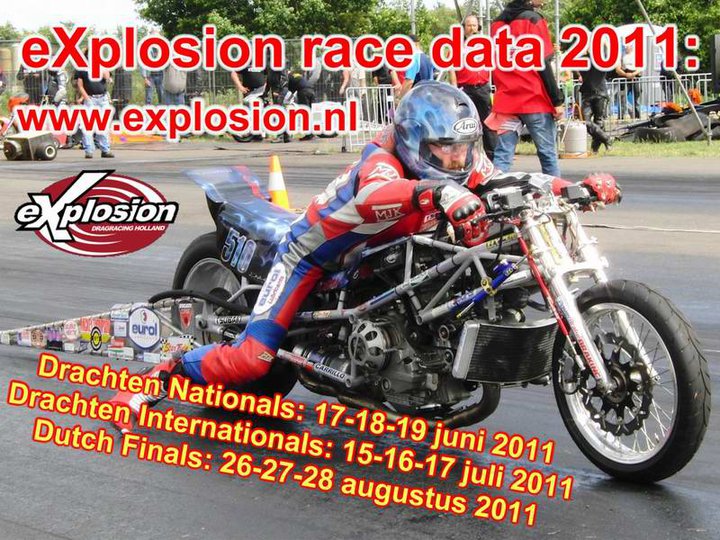 Many thanks to "Beschleuniger" Mathias for kindly letting me use his pictures in this report. And to DaSchraadz and erselbst for the youtube films.

All results of the NitrOlympx can be found here.

Anna-lena Asplund's dragbike is up for sale
Check the details here. 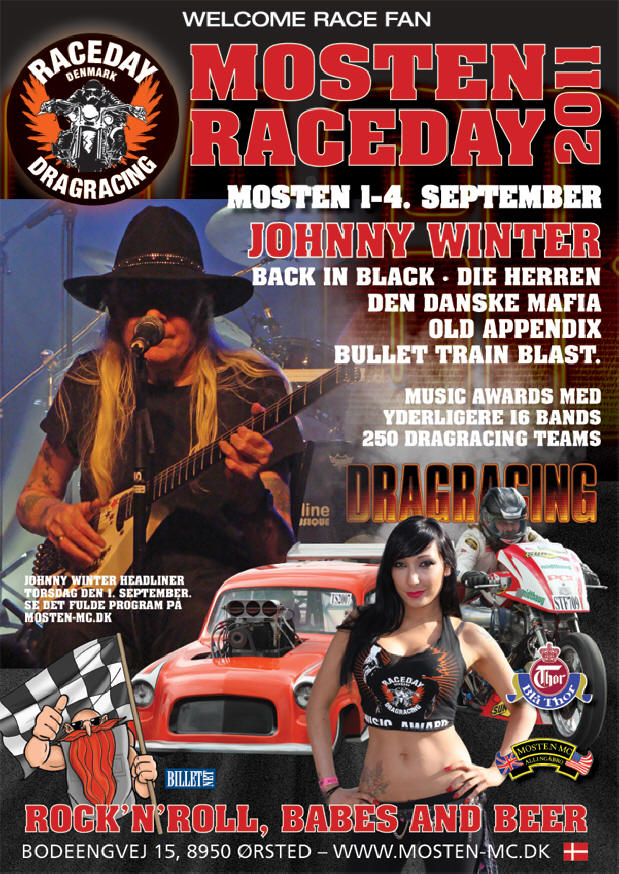