Round three of the Euro serie.
Same location as last race but the weather was the complete opposite.
We almost froze our asses off last time, now it was almost too hot to move.
On saturday night a very heavy thunderstorm came over and flooded the airfield with about two inches of rain.
A warning was given in time, so many teams were prepaired, but still some tents flew away, a big one landed at the end of the track. The water was quickly absorbed by the Frisian clay, and on sunday morning it was sunny and tropically hot again.
Hear what Canadian John's crewman has to say about it:

These extreme conditions made it very tough for the teams and the material. In supertwin topgas, Ludo Scheepers was the first victim.
He broke his gearbox during his first attempt to set a time, he took down his tent, packed his trailor went back home to Belgium at the same time the last racer in our class arrived at the track.

"German Undertaker" Cord Albers an his team came to join the seven fanatics that were also present at the last race. 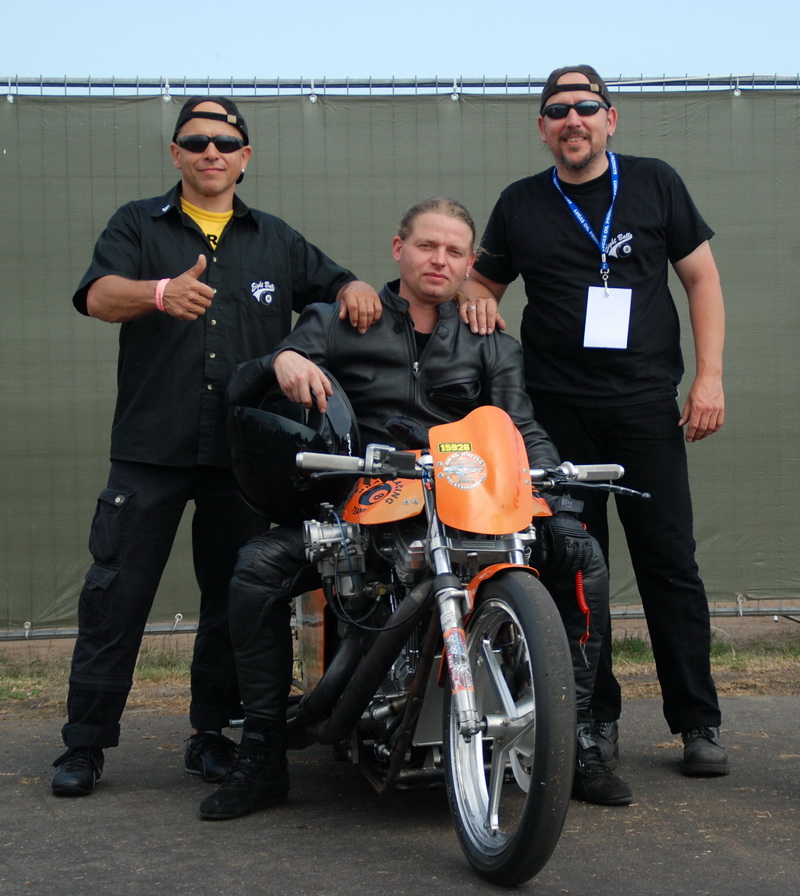 So we could have had a full eight field drag race this time around, but as we all know: Shit Happens! 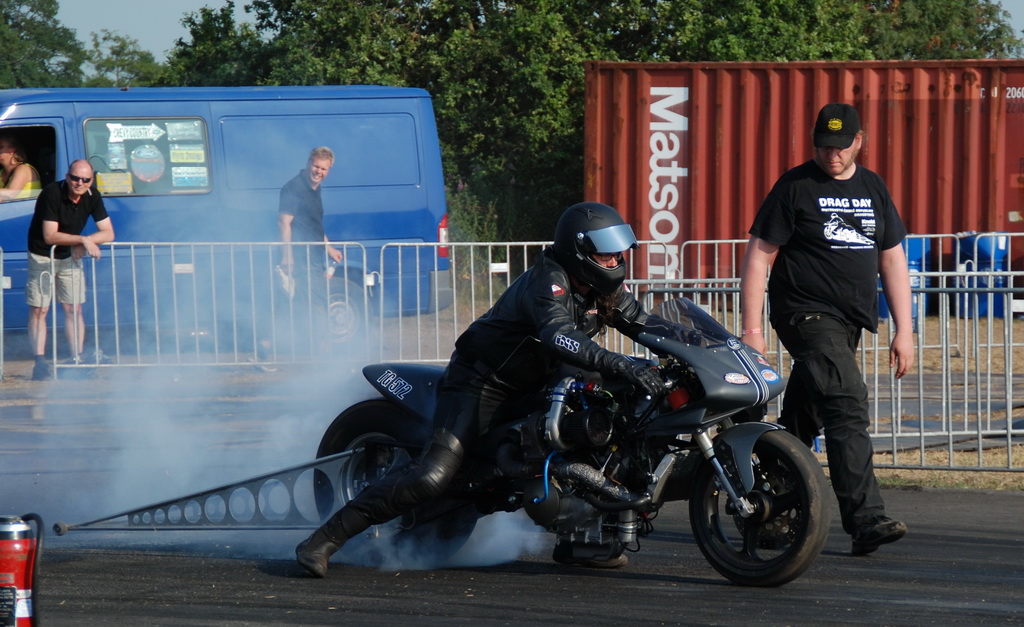 Peter Niklas and team Sideburns knows all about that. After the explosion of the new manifold at last race, they came back with last year's set-up and tried to get the turbo charged Honda into the eight second zone. The exhaust temperature got hotter then usual, causing Peter to burn his upper leg after a few runs. He was well taken care off by a lot charming females who gave first aid, and even an ice-cream to soften the trauma. 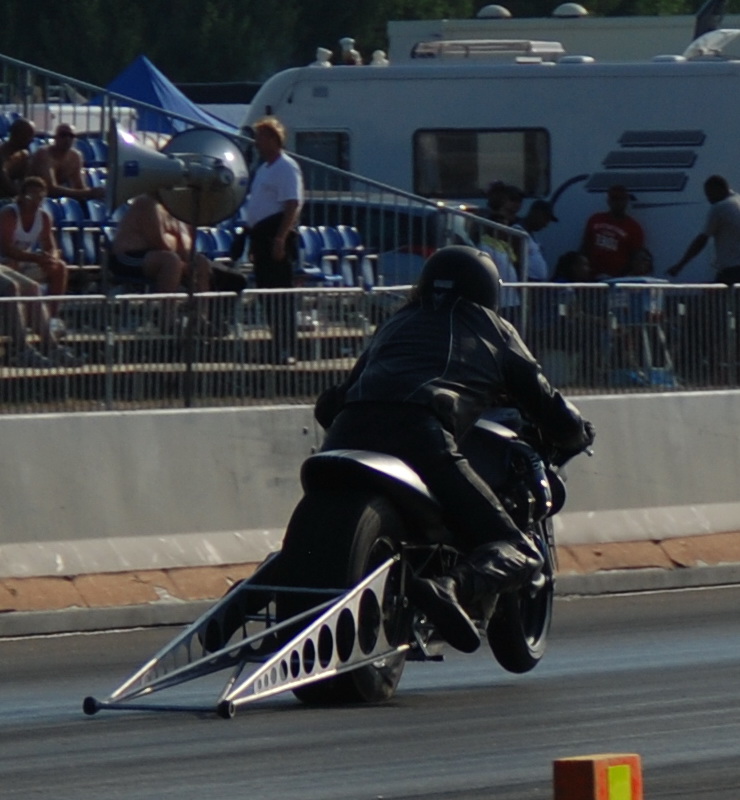 Peter kept his charming smile on his face all weekend and even managed to put a "low nine" on the clock. And his crew was also helping a hand to superstreettwin racer Stefan Graff who was involved in a hard battle against two Czech racers. One of them, Pavel Kubera set the best time in his class on his Honda but broke it while doing so. 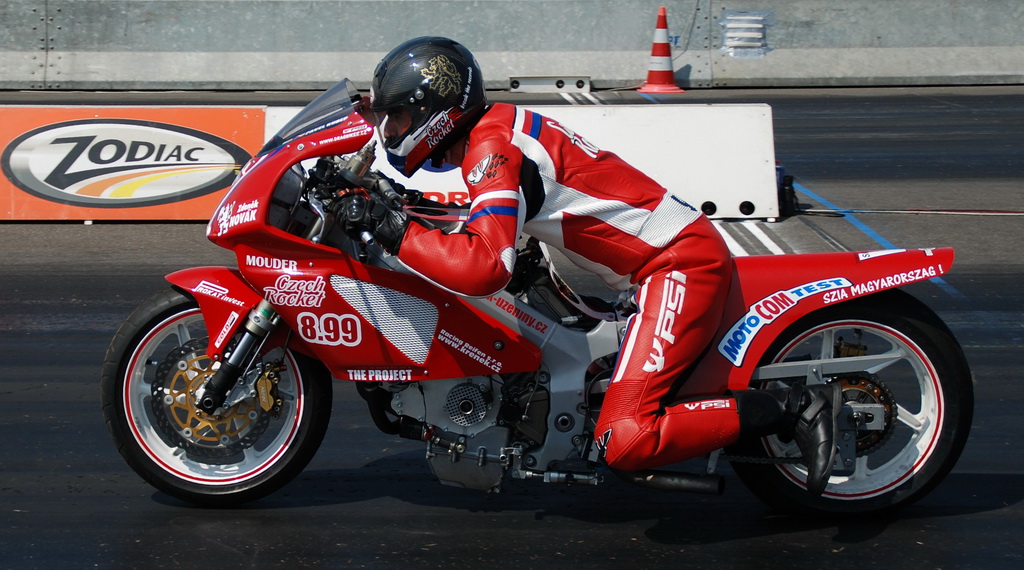 He made a phone call home, and early saturday morning former champion of our class Roman Sixta showed up with a fresh engine and helped the team to put it in the frame. In the afternoon he went back to Prague, I hope he made it home safe through the thunder storms. Pavel won the race, Stefan did a redlight in the finals.

The officials and track crew did a great job, four rounds of qualifications were held on friday and even five on saturday, so everybody got enough chances to get into the race on sunday. Harry van Schie used all nine shots to get the blown Harley on top of the list. 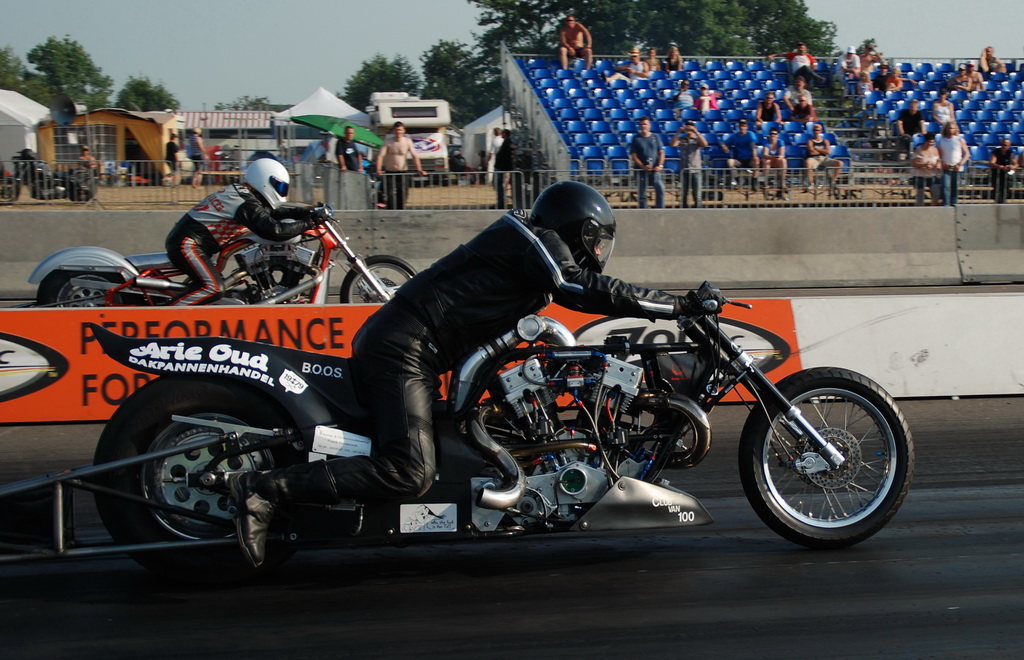 Even a cheerfull moment for families and friends of Full Throttle team when an 8.2 came on the score board. The message came on the speakers that it was a mistake: it should read 8.5 seconds. But that was difficult to hear while wearing ear protectors. 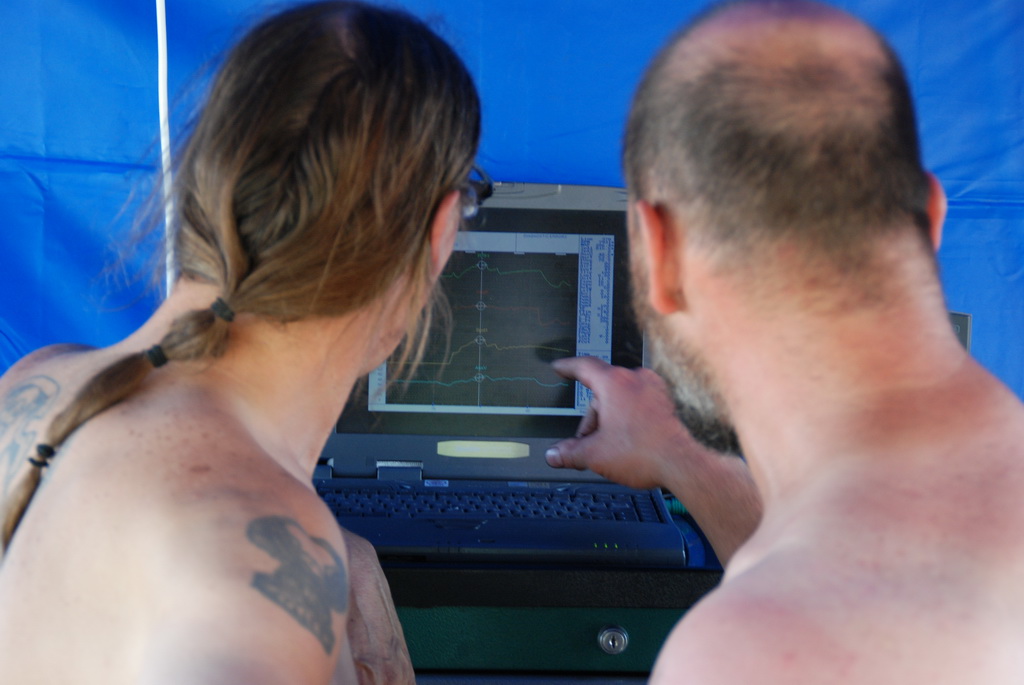 While the clutch man was grinding a few sets of plates for sunday, mechanic Jaap discovered a compression problem at the rear cylinder, so the head was taken off for inspection, shortly before the storm came. Then they had to keep the kids from drowning and save their "easy up" tent. They did a good job securing it, while on both sides their neighbours had no more roofs! But they could not repair the bike and were out of the race.

A mistake was made with Frank Heitmann's first run. He was given a time slip of 8.1 seconds, puting him on top of the list after the first attempt. But it turned out Frank left the line just before the tree was activated. So that time was later taken off the list, Heitman ended on place #3. Frank found that decision too hard to accept, lost motivation on saturday evening and did not show up for race on sunday at all. That gave John van Geytenbeek, who qualified as #6, a free entree ticket for the semi finals. Here's picture of John doing the burnout: 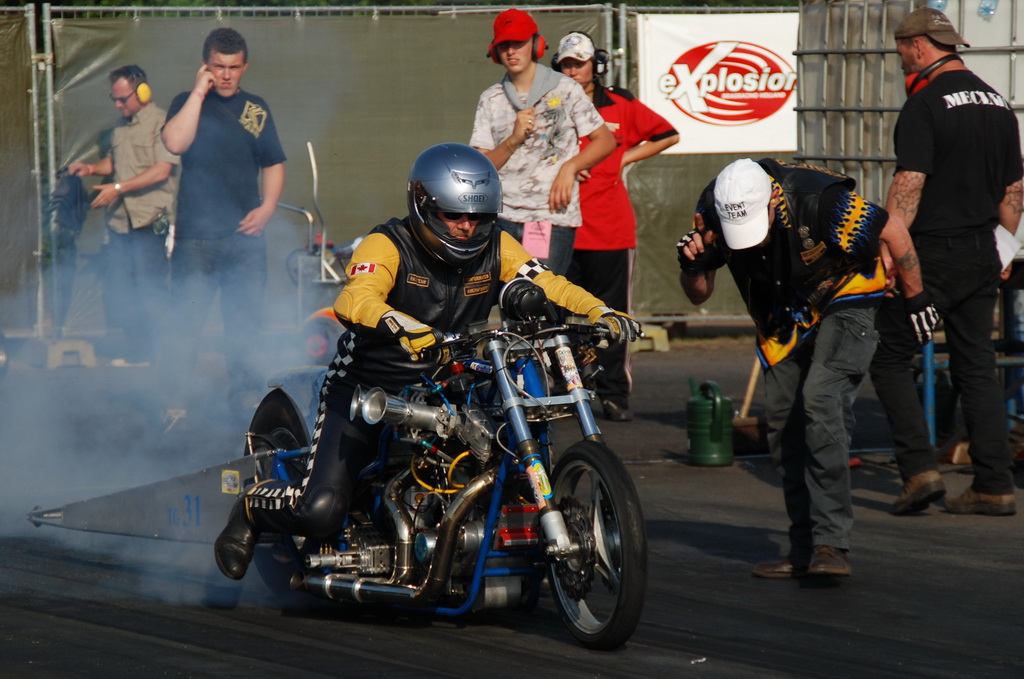 Long time racer Marc van den Boer had to come to Drachten without his loyal helper Ronnie. We hope his wife Tooske gets well soon.
Marc qualified #5 with his homemade Harley dragbike. 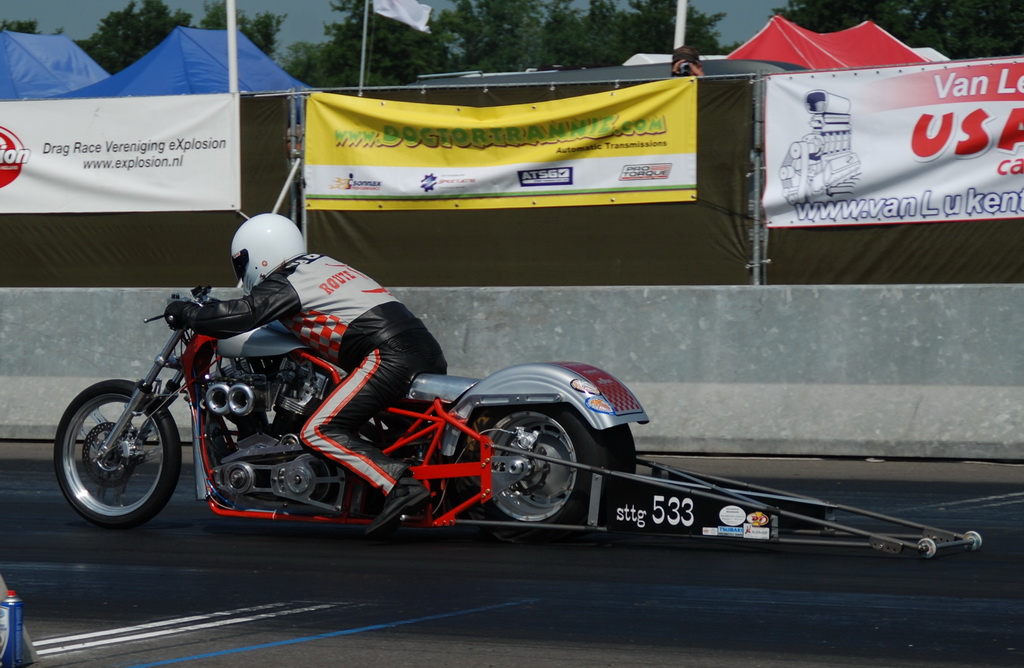 It's based on a Tommy Karlsson engine and Marc is the only guy in our class with a slider clutch. He travels a lonely path but improves his bike for almost every race. Marc had a free ride into the semi's because van Schie didn't show up. And in the semi finals he also got to ride alone. But he could not get his bike to start when he checked it after the quarter finals. Desperate attempts to find the fault, and Cord Albers even lend him a coil but that did not help. 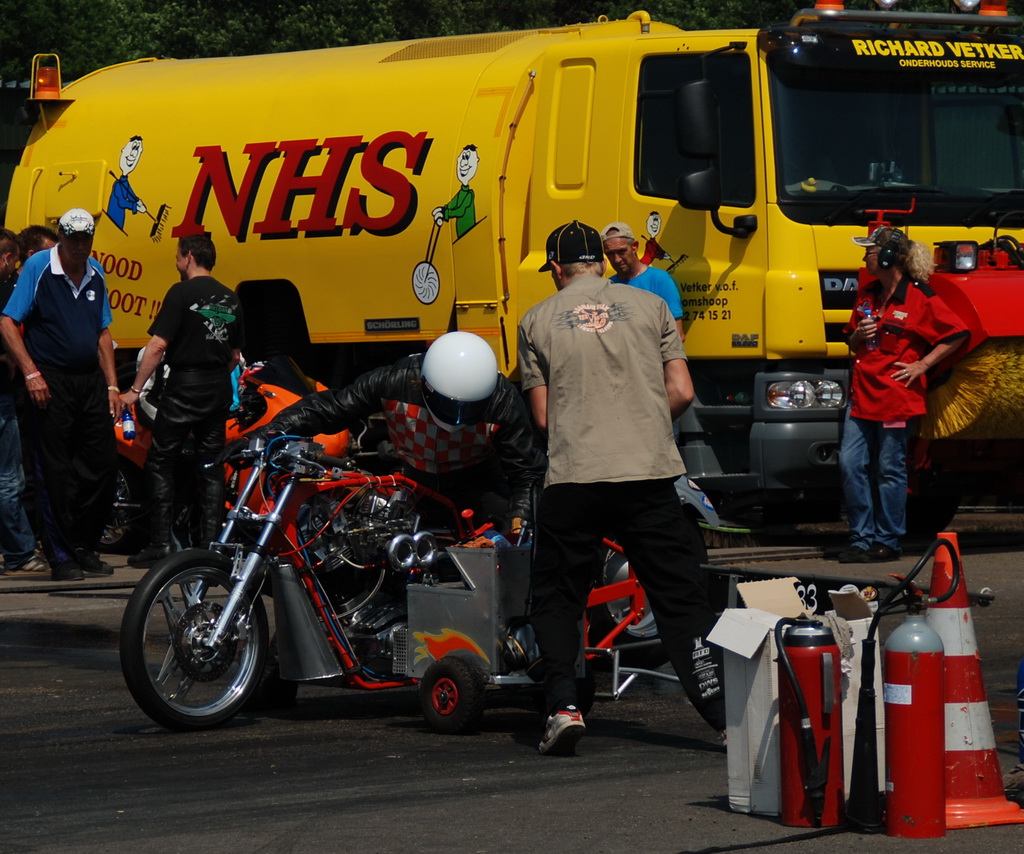 Marc tried a few times to start it up, but he could not make the pass! He would have gotten second place in the race and in the championship list if he had. More shit that happened: 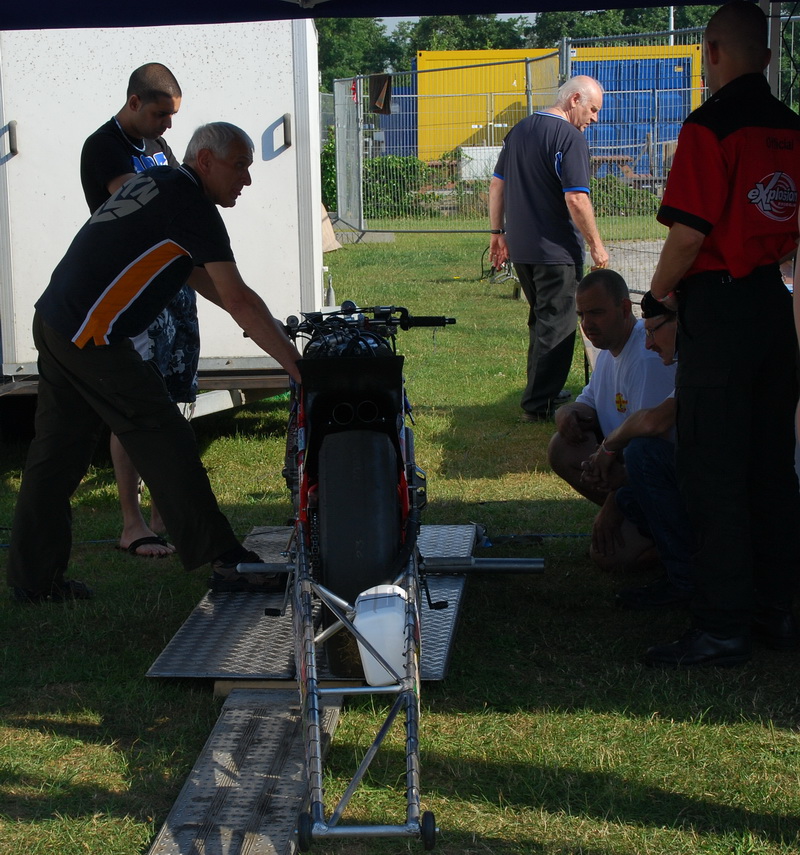 The scrutineers that checked Herman Jolink's bike warned that his ground clearance was not enough. Still they allowed him to to race, but told him that a protest could lead to disqualification.
Herman used all four qualification runs on friday to get a feel for the track and set a good time. 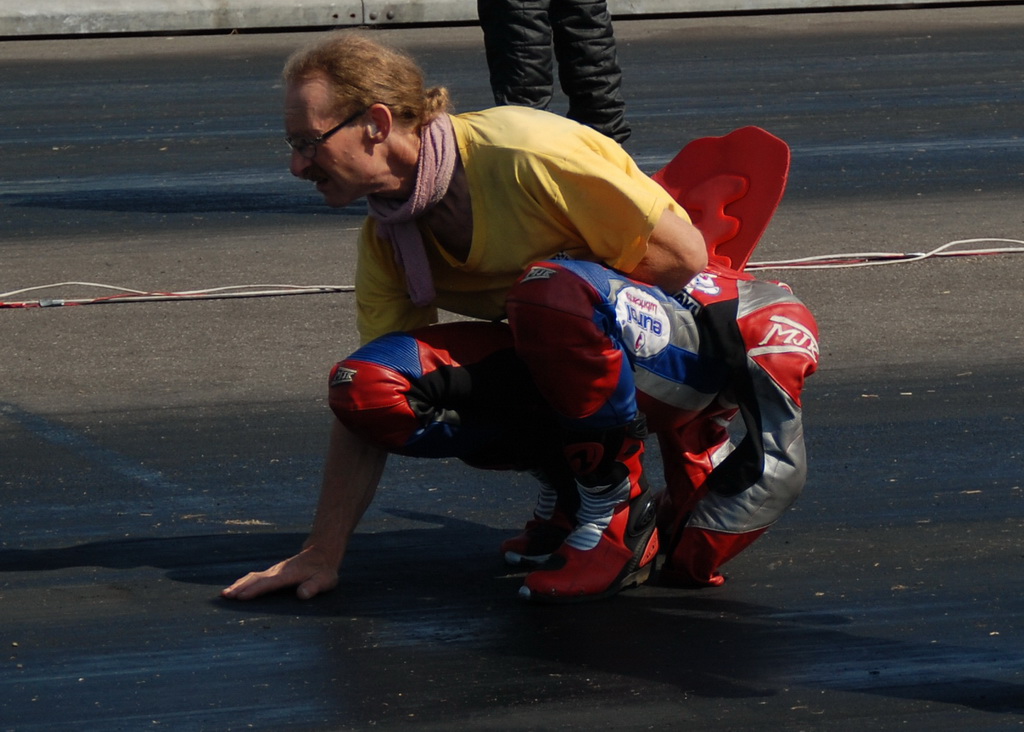 On friday night he wrenched till the wee hours to re-adjust the shifting mechanism, found a broken sparkplug and on saturday he was able to also use his sixth gear and his times improved.

In the afternoon he had exactly the same time as Cord Albers for a while, 8.413, and in the fourth round on saturday it all worked out for Jolink.
The track was at it's best and it started to cool off a bit. 8.370 put him on top of the list.

So on sunday morning five topgassers went to the startline. Superstreet bike was to race first but had to wait for new flowcharts. So the Topgas class was pushed forward, but the riders got a few minutes to prepare. When Herman Jolink had his engine running and warmed up and rolled into the burnout box, an official messured the ground clearance. Herman was given the sign to shut it off, he was out of the race.

On the left in the picture below you see Herman on the left, talking to the official who is holding the messuring tool. I think the waterbox is not the most flattest piece of asphalt in the pre-start aerea, and therefor not suitable for propper messuring. 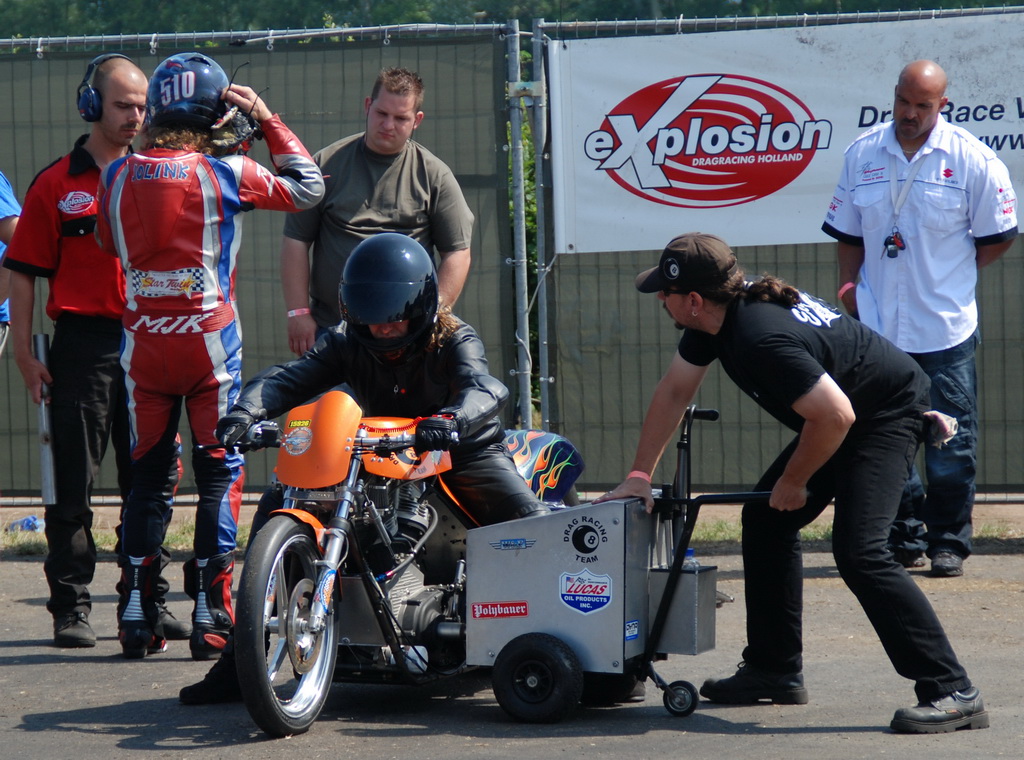 Hermans comment: " If they would not have given the okay on friday, I would have tried to fix it, I need to make a new exhaust pipe for the front cylinder. It's a new engine with the old pipes."
But then I would not have had the time to find the sixth gear, the broken broken plug, and I would not have set my third personal best time ever. Still, I think they should have checked me when I entered the prestart from the line-up. There was plenty of time for that. No need to humiliate me in front of the audience". 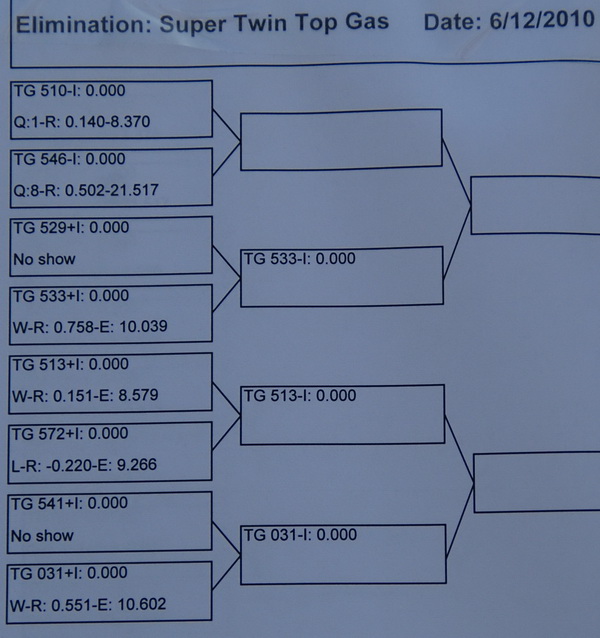 So Cord Albers was the only one who had an opponent in the quarter finals. 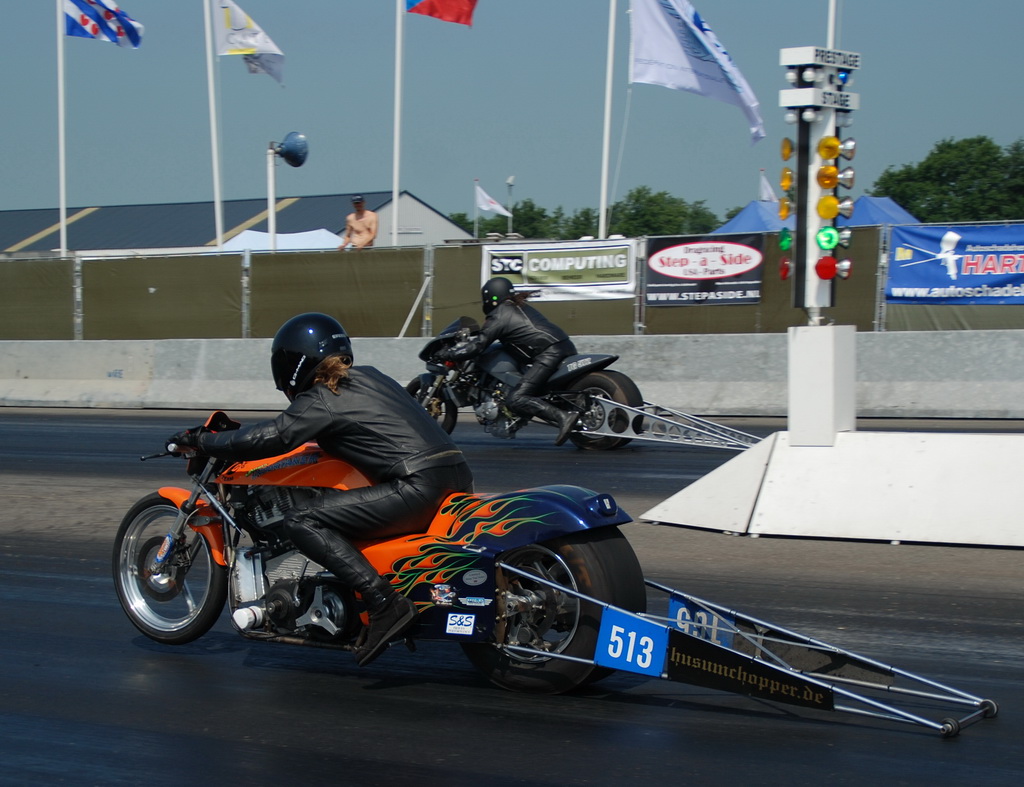 Peter Niklas redlighted, but did a decent 9.2. This race was Peter's best performance so far this year.
Cord als beat John van Geytebeek in the semi finals. Cord has the faster bike, and reacted slightly better: 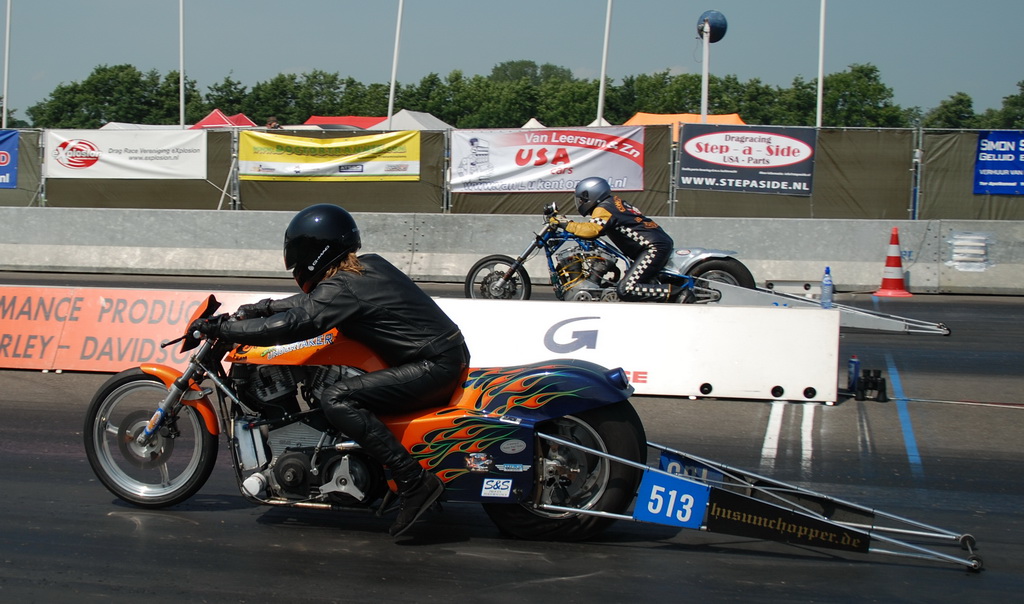 With all competion already eliminated, Cord did not take it easy in the finals. 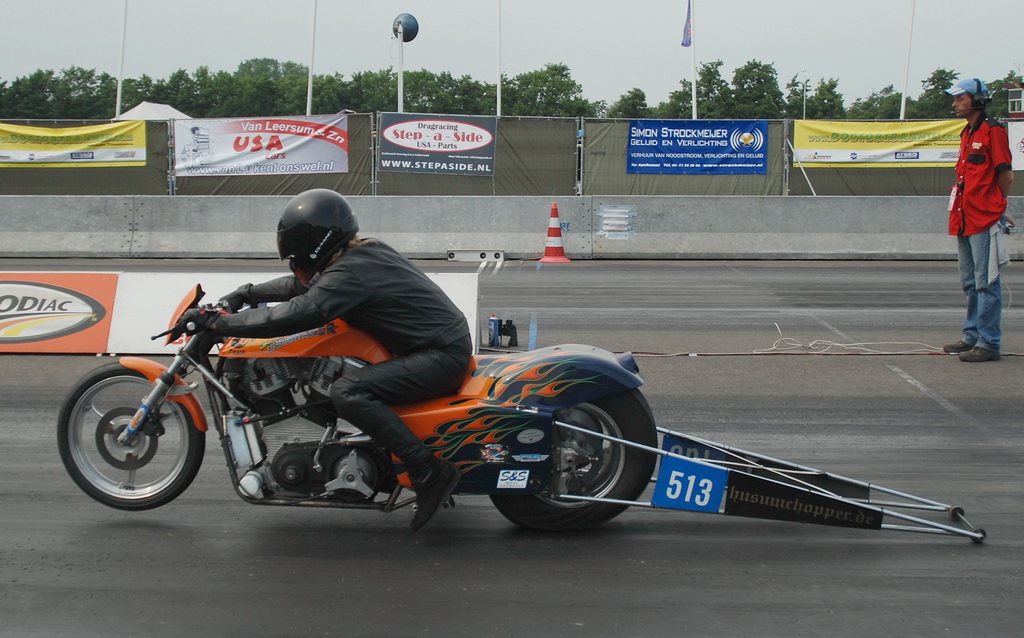 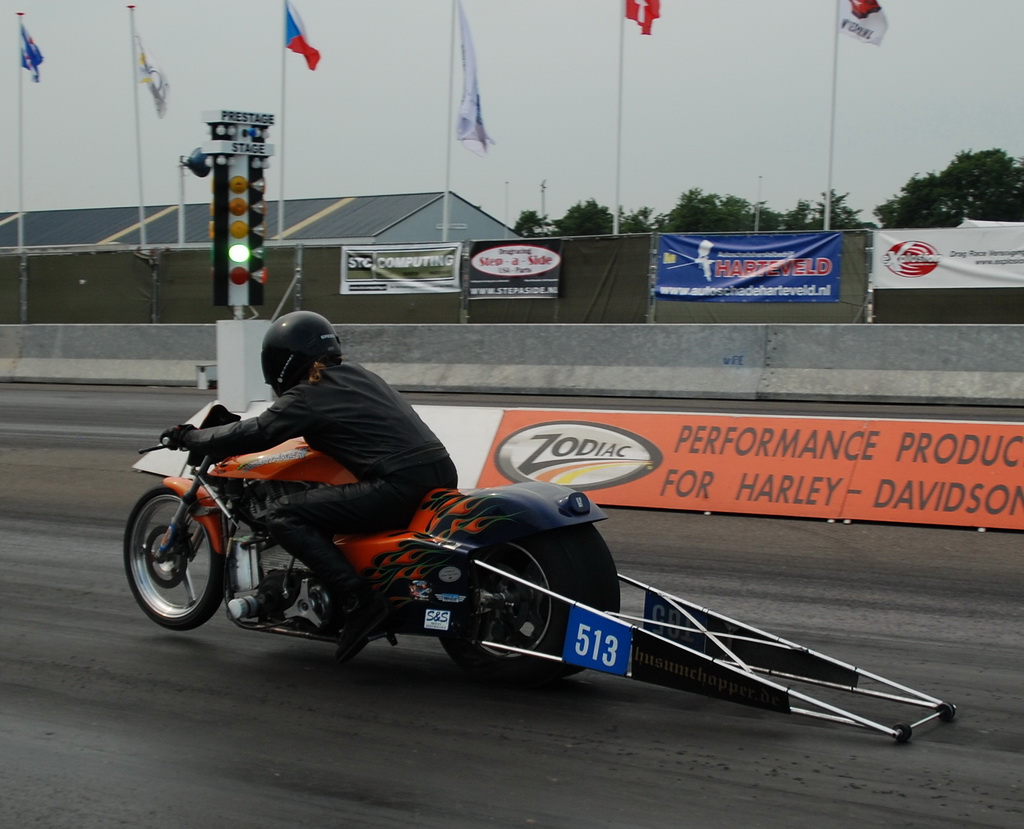 Too bad for all the race fans he didn't get a bit more competion. 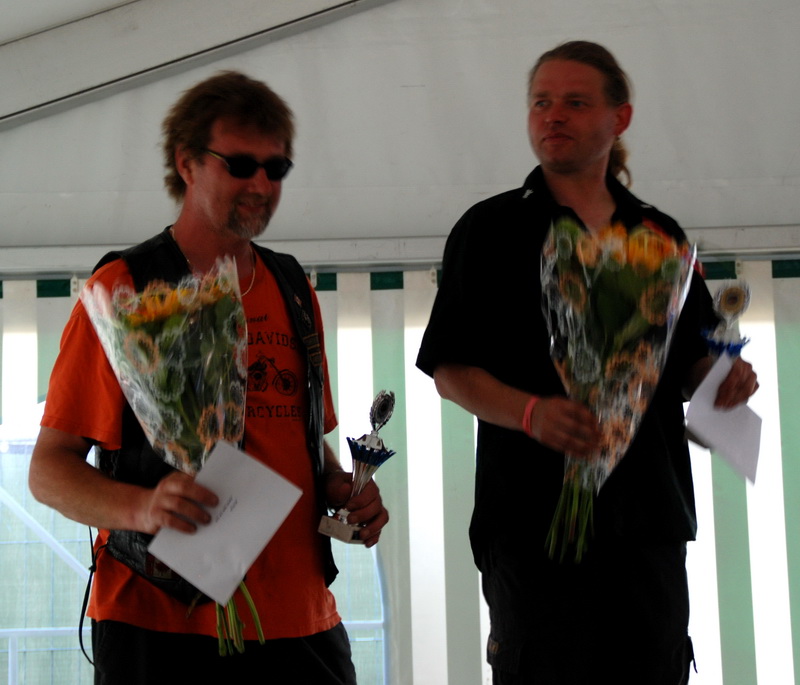