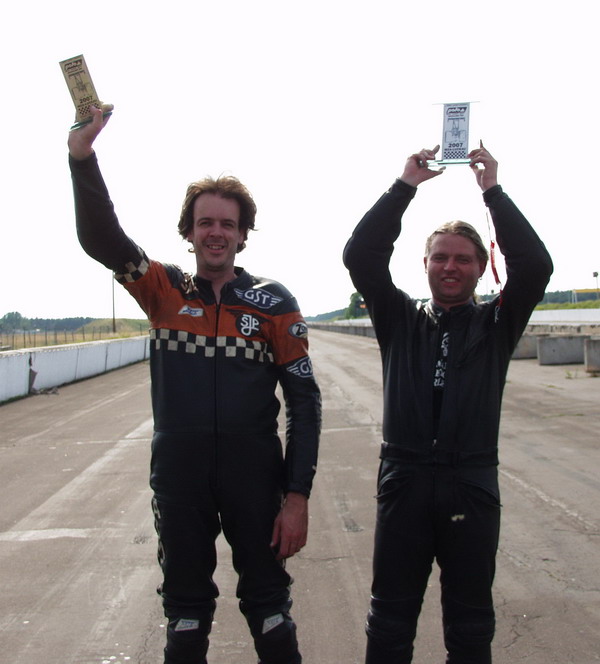 The S&S Buells rule our class. And the champion keeps going home early. That must be the conclusion after last weekend.

Both races in the east of Germany were won by last years winner of Luckau: Cord Albers from Germany. The weather forecast didn't look so good, and it rained a lot in Berlin, but we were lucky in Luckau, and had a good race on a fast track. The MSTO did a good job and everything went smooth. Twelve teams were ready to battle, but some were not prepared. Roman Sixta had a new engine in, after the old one exploded in Hoskovice. He failed to qualify after a good test run, and packed everything in early again! He suffered problems with the sealing of the heads of the supercharged Honda engine. Water sprayed on me like rain after he left the startline.

Frank Peisker got his bike through the technical inspection, but that was all for him.

Frank Heitman and Criss van Minnen were not allowed to race one bike in two classes, so they raced in the V-rod destroyer cup class. Criss made it into the race, Frank wrecked his gearbox during qualifications, so he had the day off on sunday.

Mark Vandeboer went quicker every run, but failed to qualify for the 8-field dragrace on the 1/8 mile. 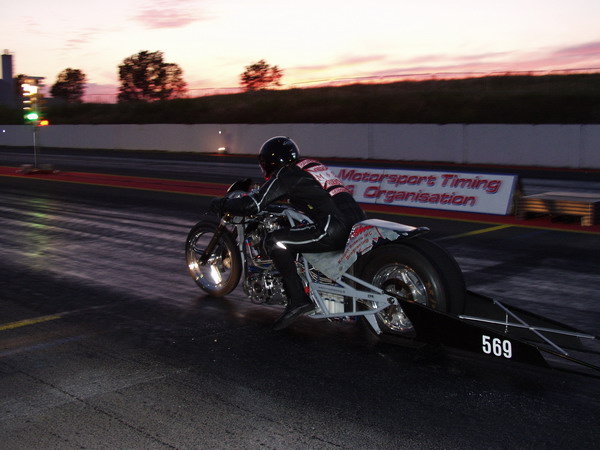 Monster Greubel also went faster every round and qualified seven.

Brian Glaener was the quickest on saturday: 5.30 sec. followed by Cord Albers and Bernd Niessen. Team van Schie finally got their bike running the way it should, and qualified #5.

Gert-Jan Laseur had lots of luck. After 2 qualifying rounds with only one good result, he stubbled into the finals without racing more than ten meters.

He watched Harry make a redlight, and Brian fail to start, so he crossed the start line, but shut it off immediately, to spare his bike.

Dris Hamadi got into the semifinals because Niessen had gearbox problems. 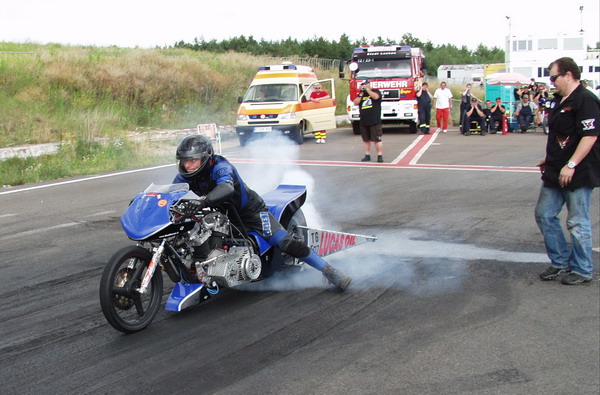 He got beaten by Cord, while doing his best time of the weekend.

Rainer Oberle was the number 8 after the second qualifications, and couldn't better his time in the third round, but neither could Vandeboer, Lymand or Sixta. Team Pussycat was glad to be in. 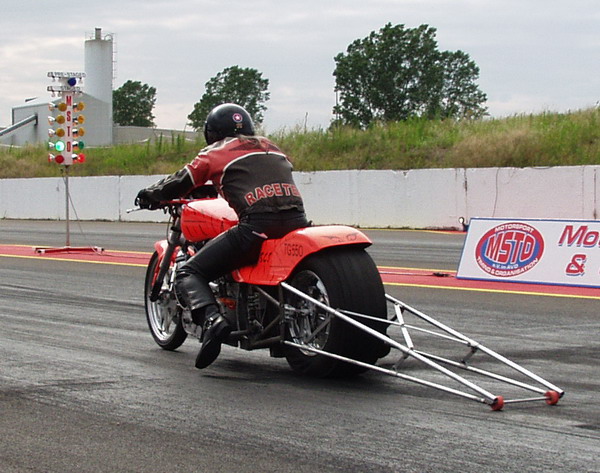 On Sunday he was kicked out by Glaesner in the quarter finals.

Cord Albers got his bike to run great. After taking out Monster Greubel and Dris, the "German Undertaker" burried Laseur in the finals with a 5.2. and did the highest top speed of the weekend, earning an extra 25 points. Gert-Jan Laseur is stronger in the lead after his second place. 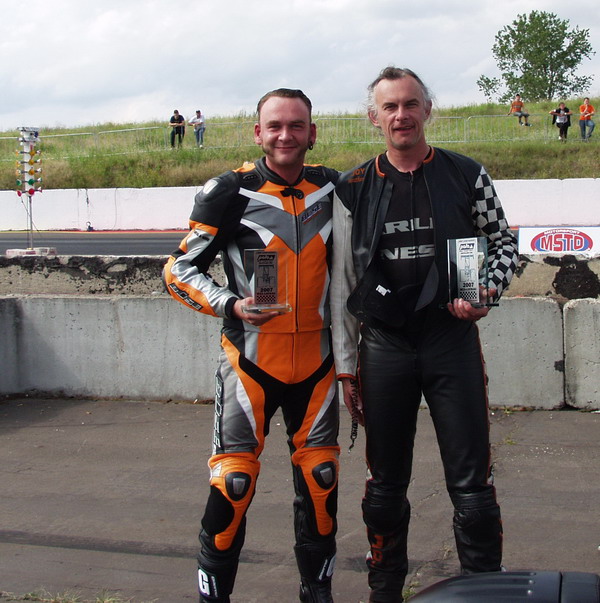 Our former champ Axel Seifert took the win. Congratulations to both of them.

Many thanks to Sammy and all the crew at the MZA. I hope they have us again next year.

Then we all went to Wittstock, between Hamburg and Berlin. 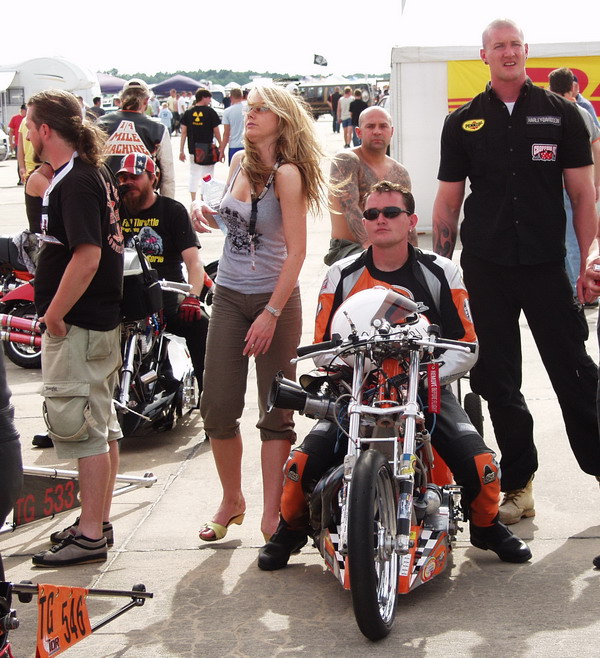 Again a former Russian air base, with good racing and fast times in the past. Job Heezen did an 8.0 there many years ago, so expectations were high. It was bitter cold then, totally opposite from the weather conditions this time. 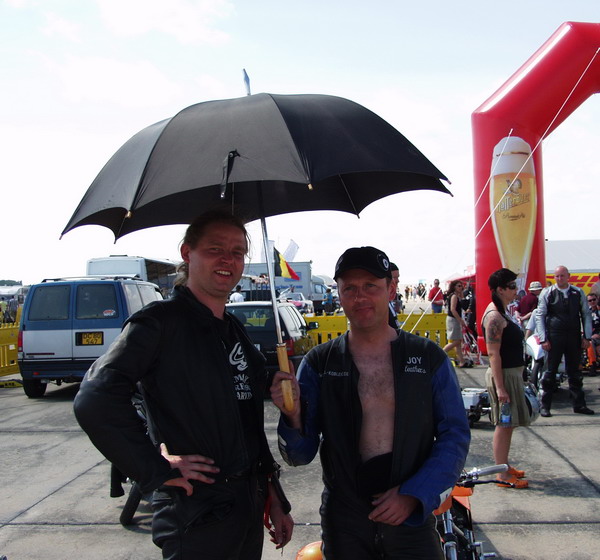 After a period of heavy rain during the week before, it was dry on friday, and got blazing hot during racedays. The track had not been used for some years, but Wölk Events rents it for a longer period now. The Kath Brothers organised a dragrace with them, and it was a big succes. More spectators then at any of our races this year so far, and a full sixteen field with all in. Three racers from Belgium now, because we saw the first appearance of Ludo Scheepers in our class.

He's got Vandenboers old engine in his frame now, and was his neighbour in the pits. He qualified #16, and got the honour of starting off the 1/8 finals, being in the first pair, up agains Cord Albers. 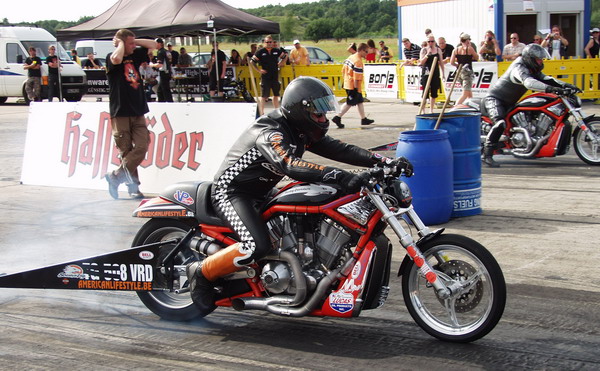 Criss van Nimmen, also from Belgium, raced his V-Rod in topgas too. He was out in first round, but got more succesfull in the Destroyer cup class, where he got the third place behind Brodbeck and Karst. 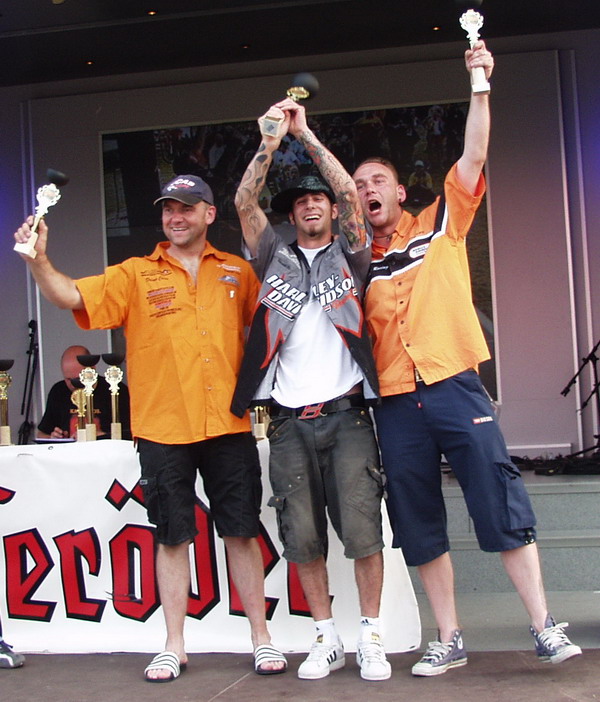 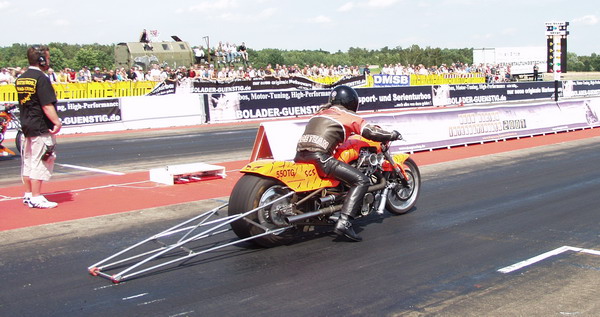 Rainer Oberle qualied number 8 again, but in a 16-field this time, a big difference with last race. He even advanced one round, taking out Frank Peisker. 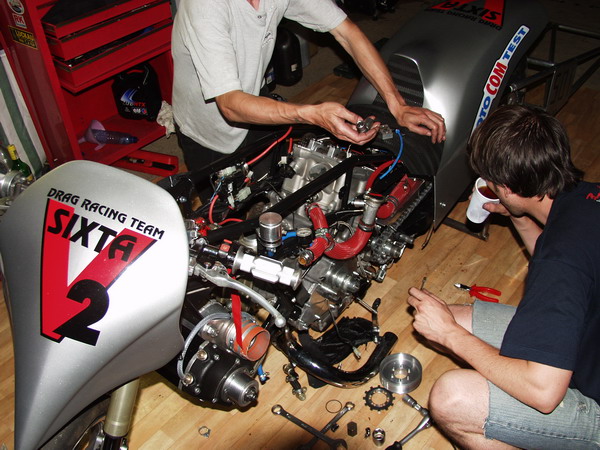 Roman Sixta's team was still trying to get the Honda in shape. They were wreching late on saturday night, and so were their opponents, Monster Greubel's team, the Knightriders from Wurtzburg. 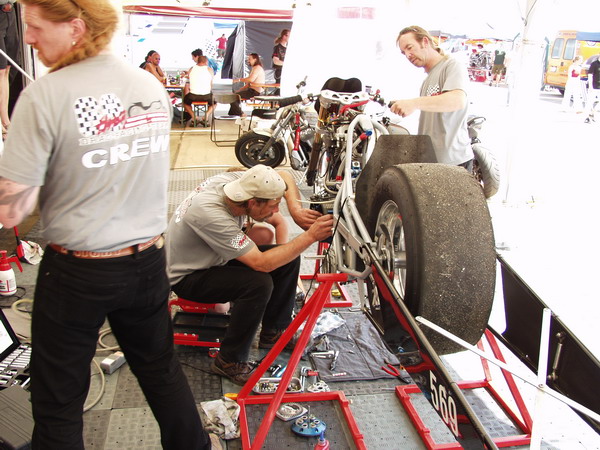 But in a much more relaxed manner, and with all the comfort of a big racetruck that could fit a top fuel dragster team. On sunday Sixta's team was still working, and couldn't make the call. Three races in a row they packed in early without even racing. We will not see him in Switserland next week, he's gonna prepare good for Hockenheim, and maybe that's the last time we see him in action in our class.

So Greubel had a bye-run, but didn't take it easy. He had troubles stopping in time, and went into the grass at the end of the track. Only the front disk was damaged and repaired in time to meet Herman Jolink in the quarter finals. 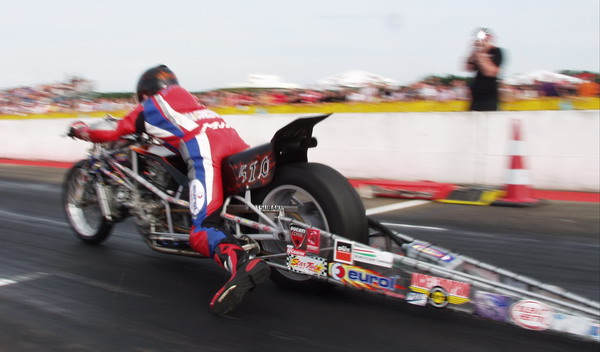 Jolink was absent in Luckau, but in full swing in Wittstock. He was in Italy doing demonstration runs at the racetrack in Misano during the World Ducati Week, and then went to Kunmadaras where he did six test runs under similar tropical conditions.

So only the strong ones survived. The four best qualified were also the semi finalists. The Buells of Albers, Glaesner and Laseur, and Herman Jolink on his Ducati. It could have been Denmark taking the winn, had Brian not redlighted against Cord. Herman Jolink had a V-rod destroyer for breakfast, and Monster for lunch. In the semis he gave his best, but Cord was to quick. Both bikes have great top speed, so it stayed exiting till top end. Brian Glaesner beat Laseur easy, Gert-Jan's bike wasn't running good. Brian told us about his sharp, almost perfect reaction all weekend, but he went over the edge at the tree in the finals, while he could have been the winner doing a better time. So Cord had a little luck and stayed cool in the finals. It's all in the game! 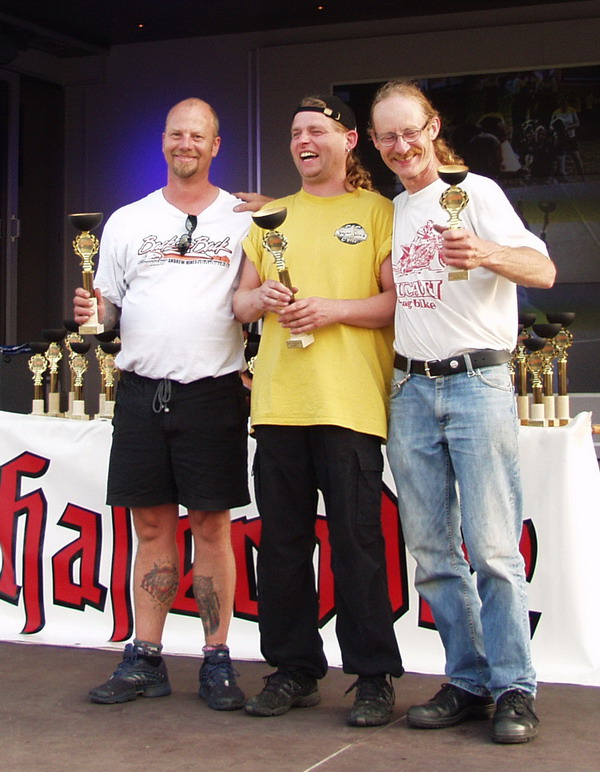 Gert-Jan Laseur still leads the championship. Cord Albers also took the speed points and jumps to second place, ex equo with Herman Jolink. I'm off to Turtmann in Switserland, see you all there. Albers, Sixta and Glaesner will skip that race, so who is gonna stop the Dutch boys?

More pictures will be added later.

All results of Wittstock can be found here.

Newsflash: While we were racing, there were new developments in the case of the dragstrip in Drachten, Holland.

Check it out on www.explosion.nl