This is to inform you that the Dragrace in Drachten planned
August18-20 has been cancelled. The track has been cleaned so well that they
have destroyed the asphalt.

In the middle of august our championship comes to a grinding halt, because of the sad announcement above. So one last chance for the topgassers to battle it out. The danish crew had prepaired the track well, and all facilities were there. Grandstands for the spectators, enough toilets, electicity (but not enough power for Marc Vande Boer to do some welding), sweeping trucks and a track dryer. Even Tommy Tinndahn with his G2 motorsports Buell, testing for Hockenheim. But all towbikes needed to be street legal, and only one was! So one boy was very busy. 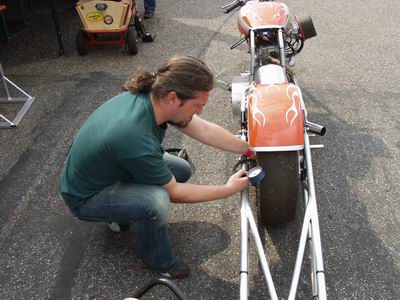 On friday three rounds of qualifications were held, so short after each other, that only Heisler on his V-rod destroyer could make all three passes. On the last one, he did a impressive 9.290!

Bernd Niessen also brought his V-rod tho finish the season, after destroying his alu-Buell in Switserland. In the middle of this action Frank Heitmann showed up. He fitted a new support bearing, hopes to prevent gearbox problems with it. 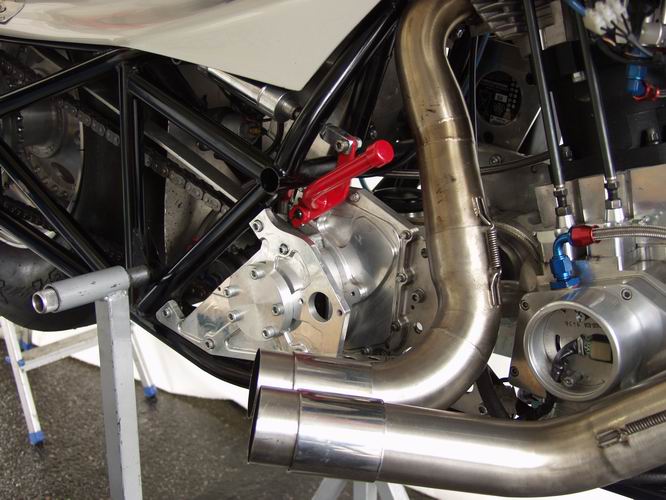 The third round was broken off because of rain, with Herman Jolink already in pre-stage. He was allowed a re-run as soon as it dried up. It kept raining till noon the next day. A meeting was held: they needed an hour to dry and prepare the track. But with the start crew in position, and a line-up filled with bikes and cars, rain came again, for the rest of the day, and the grandstands stayed almost empty all weekend. 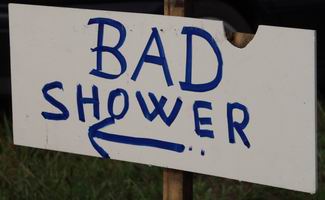 Sunday started bright, but again rain was predicted for the afternoon, so with no time was wasted, Jolink had his re-run at 8.18 am. In all 30 years, he never raced that early (a new personal best time?). He qualified fifth with 8.78 @ 251.9 kmh, "fresh from the trailer". When he was ready for his second run, the track was at it's best. Sunday is was still cold and needed rubber badly.

Less than one hour later came the last round of qualification, for some their first shot. Mike Brüsch and his team arrived last, but got the best spot in the pits, right at the crossroads of pits, line up and tow lane. Mike qualified number ten, 9.3sec. and was towed without a licence! 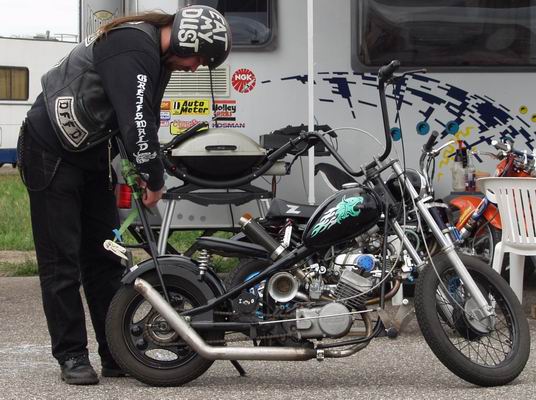 Frank Heitmann ran an 8.388 and kept his gearbox intact. 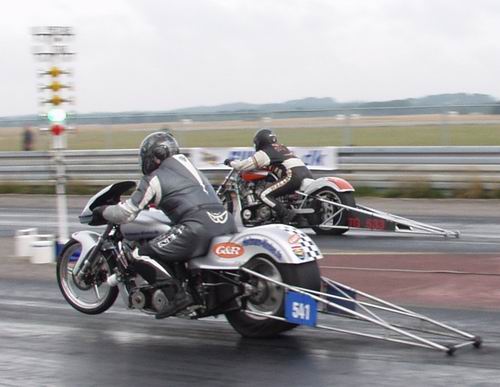 Good for third place. Cord Albers did an amazing 8.004 on saturday, but never backed it up, Brian Glaesner was second with 8.106 but had serious doubts if it was the correct time. Fourth place was for Roman Sixta. He started where he stopped last year in Vandel: with an 8.6 and even improved: 8.539 @ 248 kmh. Four of the racers got no time in that last round, so in less than an hour ("you come after the cars, yes?") again re-runs, lots of action early in the morning, even before the drag race started!

Then it was murder time again, and the German Undertaker was ready! Some even commited suicide: Frank Heitmann wrecked his engine during burnout, probably a broken con rod, and Harrie van Schie, qualified number seven, went broke during his run an did not finish. Frank Peisker started very relaxed on friday, but had to hurry to make the call for the semi finals after a push rod repair job.

Camping in the back of the pits, he had to be towed to the startline, violating the speed limit. Despite the effort, he lost to Glaesner, who made it into the finals. Cord Albers had no mercy with new boy Gert-Jan Laseur, who showed up with an ex Tom Bradford Buell for his first race in Europe. Albers 8.355 against 9.040 for Laseur. But Cord he had a much tougher job in the semi finals. Roman Sixta is already the champion, but he is always very motivated. Roman had already sent Herman Jolink home with other eight-five, and keeps squeezing the horses out of the little Honda.

A new personal best of 8.443 for Roman was the result, and he was happy with it, his parents were proud! Cord was cool with 8.232 @ 256 kmh, and went on to meet and beat another ex Bradford bike in the finals. Brian Glaesner ran 8.78, and Cord Albers 8.43. So after his win in Luckau, the German Undertaker strikes again! 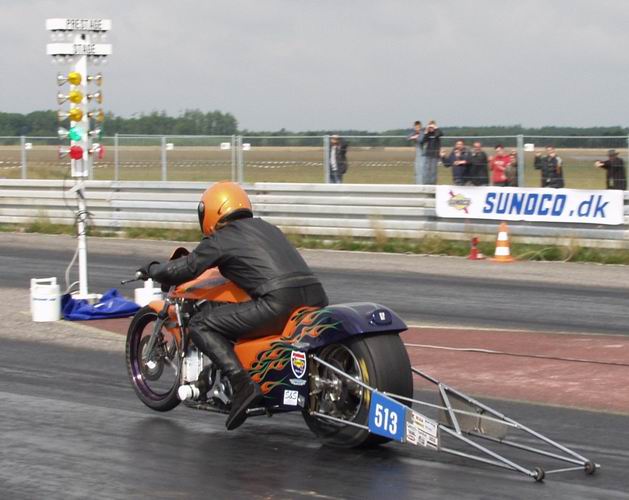 And when the last pair of cars was in the burnout box, it started to rain again. Excelent timing by the danish crew. 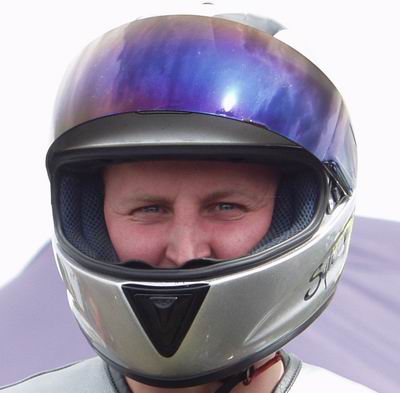 So Roman Sixta is the champion, congratulations and deep respect to him! Cord Albers jumped to second place, passing Dutch boys Herman Jolink and Harry van Schie, who are three and four. Well done Cord. Frank Heitmann will host the ceremony and party this year, held on the 21st of october, details will follow, see you all there. 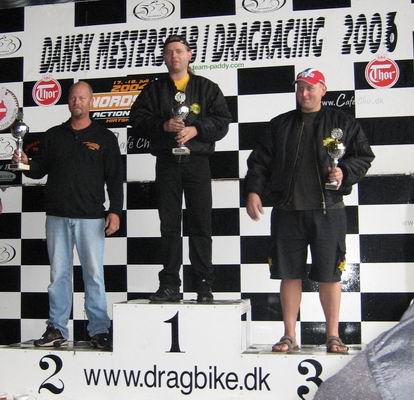