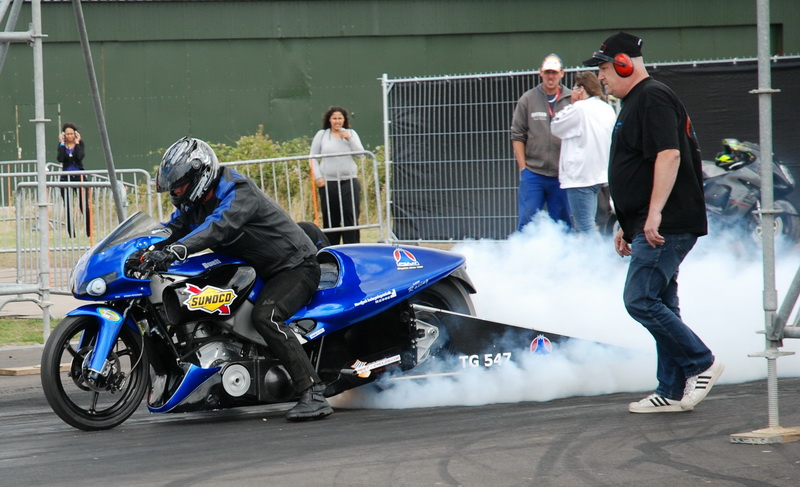 Less then 100 hours after I said goodbye to Piet Verhoef in Luckau, we shook hands again at another drag strip, and had another cold beer. Greetings to Roman Sixta who did not come to Drachten this time. He is prepairing for his debut in the supertwin topfuel class after wrecking the gearbox of his topgas Honda six times in a row. But we didn't miss him in Drachten for that, lots of riders did it this weekend. It was the fifth race in the series allready, and eleven riders entered our class. The finals were spoiled because of rain, so no winner this time. But enough action and amusement for the whole family to keep the spectators happy all weekend. They had to walk through the pits to get to the grandstands, where in most other motorsports events you are not allowed in. With at least eleven dry complete races in a row for our class, it had to happen some time. On thursday evening it rained cats and dogs when I left home.But as soon as I entered Friesland, it cleared up, so things looked good. The riders decided to do a 1/4 mile this time, but most of them were not ready for it . Some didn't even know where the finish was, shutting off too early, or, Like Marc Vandenboer, shutting off at 200 meters on routine, then seeing the guy in the other lane blast by, "Oh Shit, 400 meter", and go full throttle again to set a decent time. We all know that this kind of behavour is not healthy for your gearbox, and Marc had to pay the price later. And the guy who was the least in favour of it benefitted the most of it. We saw an incredible performance of Ronald van de Werken! He and Kul Hoogvliet (of Nol van Swieten's Challenger team ten years back) build a bike around Laseur's old engine. 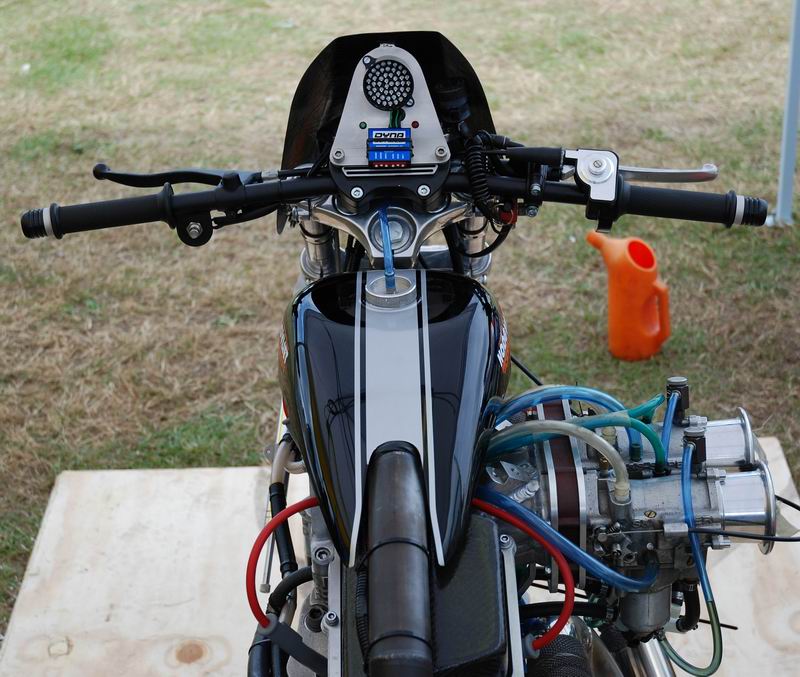 Ronald came to test it on friday and went into the finals with it on sunday. He had allready set a 9.7 on friday evening and a 9.5 saturday before Kul came to Drachten to help him out for the rest of the race.

Herman Jolink had a bad start. He broke his new engine (that he put in three weeks ago and used only two races) on friday during a warm up test on friday ("Godverdomme!!!" ). and worked for four hours to put his old motor in the frame. 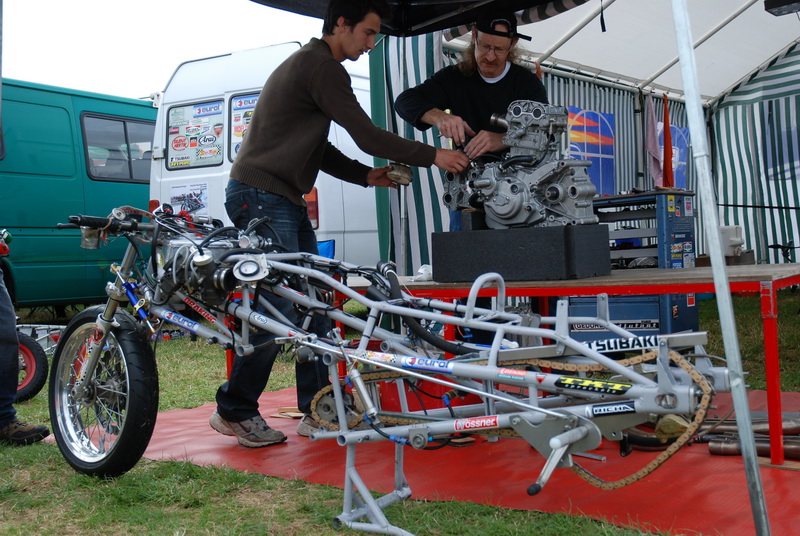 He skipped the first round because of this, but qualified number two in the second round, and nobody could get him of that spot no more. On friday evening he did a 8.5 and new personal best on the 1/8 mile of 5.38. Herman felt that a 8.4 would have been in it, but forgot to use the sixth gear, still not used to doing a 1/4 mile in Drachten. 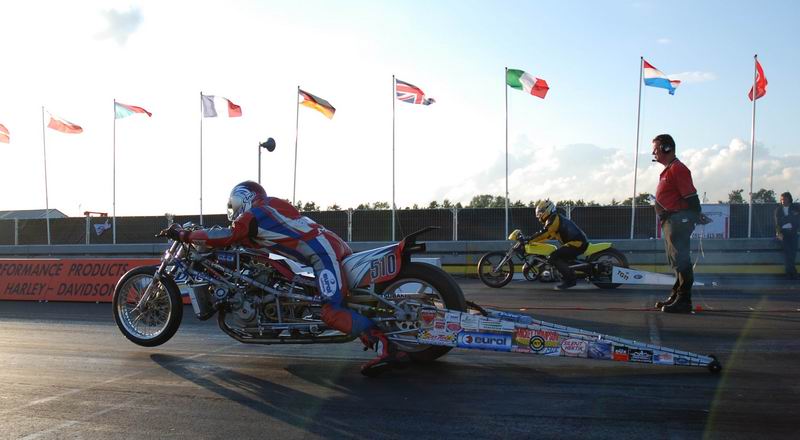 After inspection of the new engine at home, it showed that only one nut came lose somewhere, no damage done and repaired in time before the next race.

Brian Glaesner also use the better track conditions to blast to the end in 7.91seconds, claiming the number one spot. Brian was even quicker then the number one funnybike at that time. 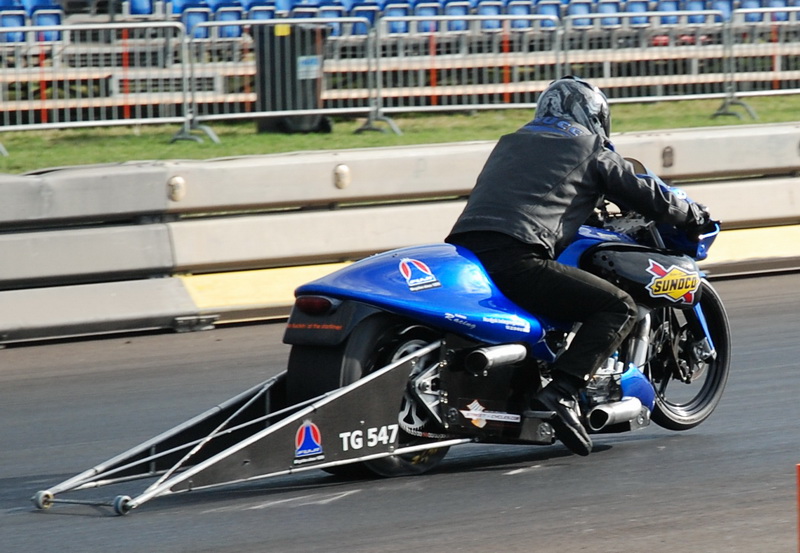 On saturday night while drinking beer, a lot of predictions by crew members and riders about how the qualification list would be turned upside down by them on the last qualification session on sunday morning. But that just did not happen at all. While Brian was sleeping in, the ten others tried hard, but could not jump in the gap between Brian's 7.91 and Herman's 8.5. Frank Heitmann suffered battery problems on friday, but after shopping in Drachten by Piet Verhoefs crew, Frank was helped back on track and did a 8.8 and got third place.
Harry had gearbox problems all weekend, qualified #8, just under 10 seconds after wrenching late on saturdaynight. Mark Vandenboer wrecked his gearbox in the last qualification. He qualified number seven, but signed off immediately. 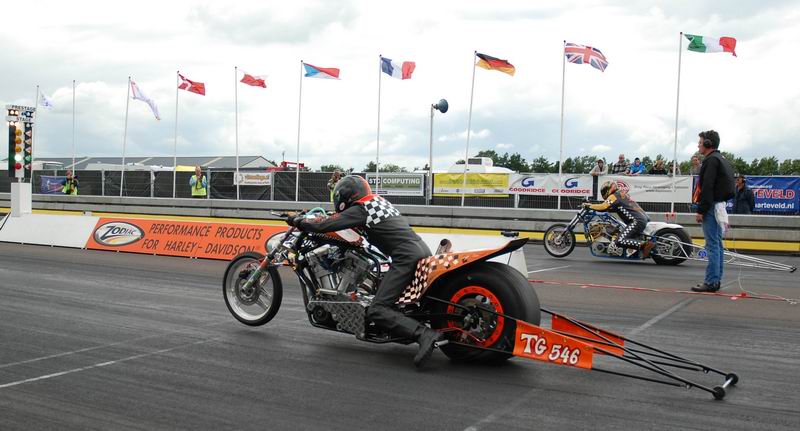 The other Belgians were not in, but Ludo Scheepens could enter the race because of this. New boy Ronald was the only one who made good use of that last round to pass Piet Verhoef and John Geytebeek and jump from sixth to fourth place with a 9.1. 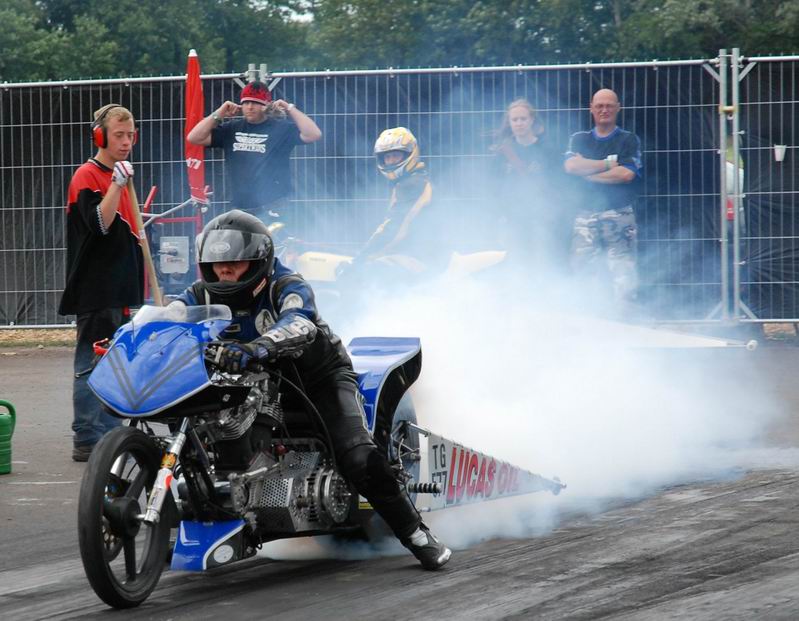 The track was dried and prepared one more time, and the sun came out. On friday some riders had noticed that a little sun made a big difference on the grip and this happened again on sunday afternoon. Brian had a strong launch but hit a hole at about 190 meters, his bike jumped up and down and he lost grip. The spray was only used on the first 200 meters, so Brian beat Ludo but he was very disappointed in the track. And guess what Brian found when he inspected the bike? Yep, damage to gearbox! Serious trouble, so he packed in and went home. "I never ride Drachten again" were his last words. So Belgium and Denmark out, and so there was one German left and some Dutch guys left. Ronald took Piet out no problem, and he was Lucky because Brian was out, so he advanced to the finals with a bye run. 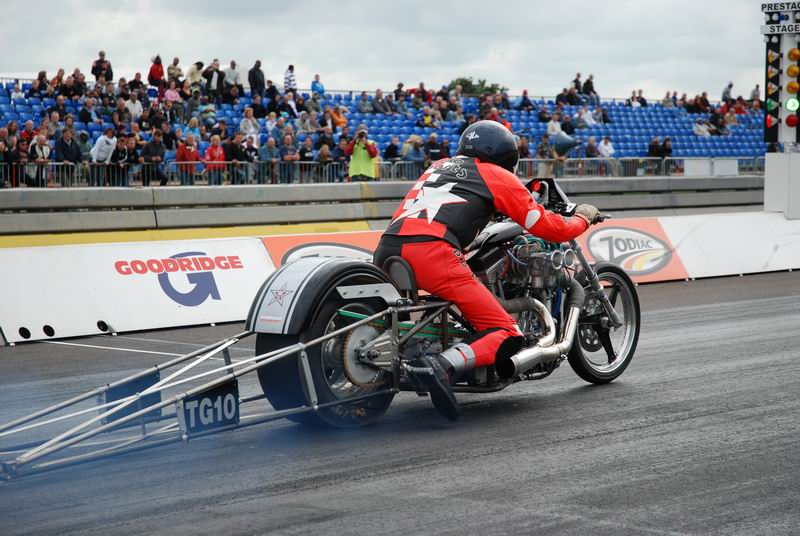 Bottom half of of the ladder: Harry Van Schie against Herman Jolink. Both rider and bikes are completely different and they were convicted to eachother many times before. Herman made a straight rolling burnout and his mechanic pushed him back in his rubber trail to get the maximum grip at the startline. Harry's bike was not pointed staight and launched towards the guard rail. Harry worked all the way very hard to keep the big bike away from it while staying on the throttle resulting in a poor 10.18. Herman reacted slightly later, but had an allmost perfect launch and run, and used all six gears of the Ducati this time, with a new personal best of 8.4 seconds. The 1/8 mile time went down for the second time this weekend, to 5.36. Herman's main backup, Kees "Startwin" van de Starre hardly ever visits a dragrace, but had taken an hour off to pay him a visit, and had picked the right time. "I've never seen anything like this from him". No, Kees, neither have we, that's why we call it a personal best!
Frank Heitmann beat John Geytebeek, but could not get his bike to go faster then 8.8. So Herman had lane choice in the semis and chose the left one. Ronald used his bye run for another nice pass to get a feel for the bike, racing the right lane all weekend. Frank Heitmann redlighted against Herman.

His bike jumped forward as soon as he revved it up. So two dutch boys left when it started to rain. It was a quarter to six, so the race was called off. 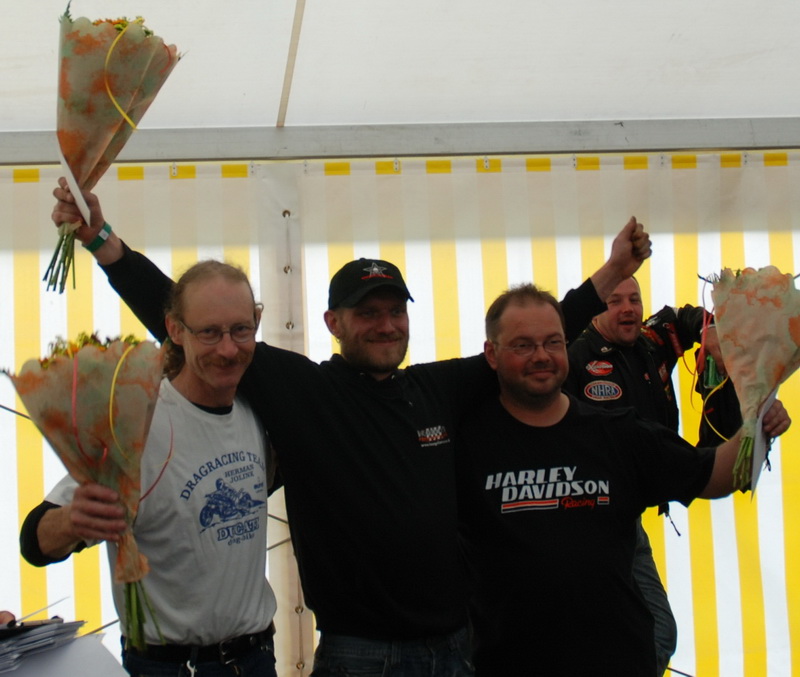 Too bad for all riders and drivers and the die-hards who stayed in the grandstand and waited patiently waited to watch the climax.
Herman and Ronald will meet again next time in Drachten, but before that we will have a race in Hockenheim. We all hope for "Gummi ohne ende" at the Nitrolypix, Let's see if Brian Glaesner can dominate the race, take the topgas club record from Italy to Denmark and make enough point to secure the championship!. 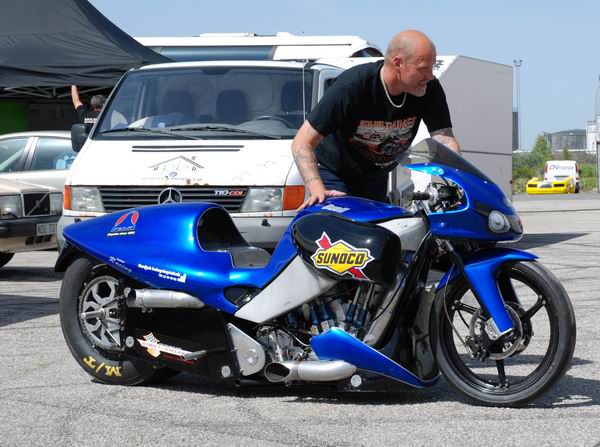