Not a dragrace but an 1/8 mile motorsprint. The last race in the euroserie and a lot of competion from the "Nordic" riders.

Arriving at the strip on wednesday, the track looked almost perfect. Still the crew kept working on it the whole thursday, so there was a lot of grip during the race days. The weather did not look too good om friday, but rain only spoiled one round.
Just like in Hockenheim, Swedish Anna-lena Asplund shot well "straight from the trailer", this time with a new personal best! 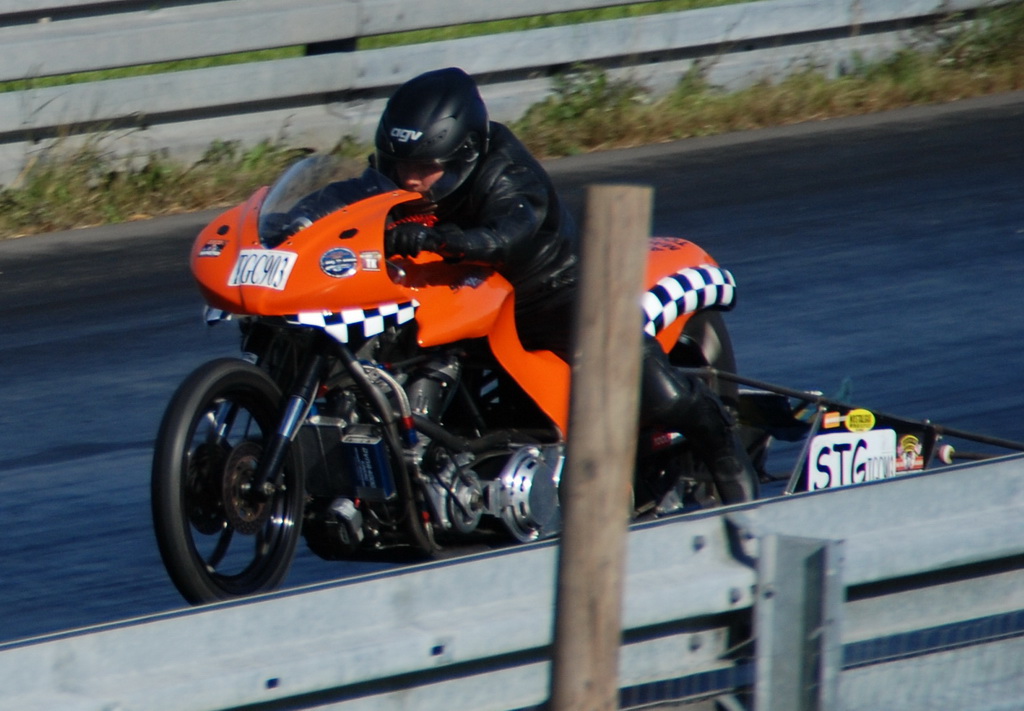 A 4.827 sec pass put her comfortably in the lead, with nobody being able to better it during the other four attempts.

Rasmus Olesen also went fast during the first round, taking second place but hit the brakes too late and landed in the bumpy field behind the track. 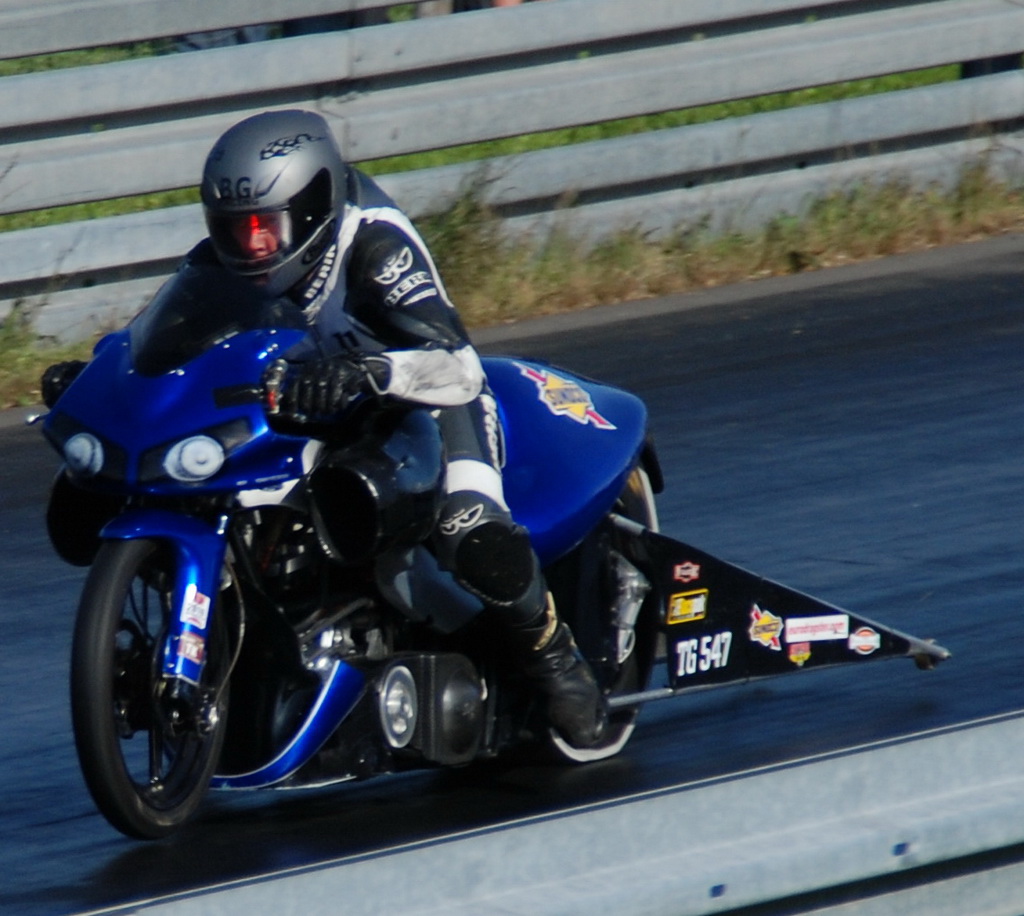 Good thing Rasmus was not seriously hurt, and team Glaesner was able to repair the damage to the Buell to race the next day. 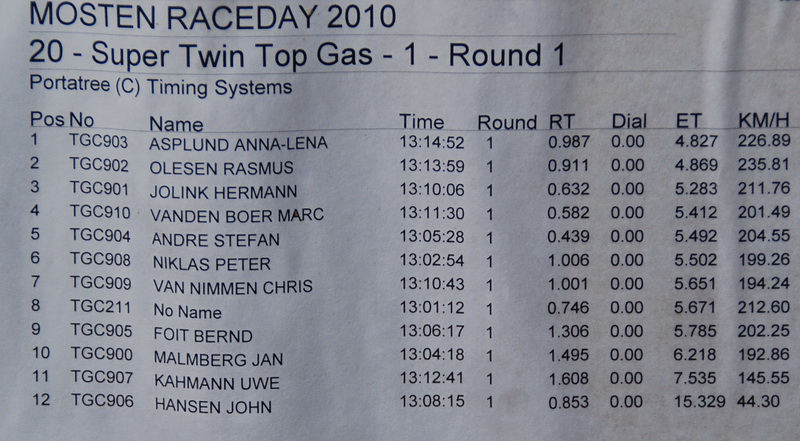 Herman Jolink's first pass was in 5.28 sec, securing the first place in the euroserie. Herman needed to qualify with the first twelve, and it seemed very unlikely that ten riders could beat his time. 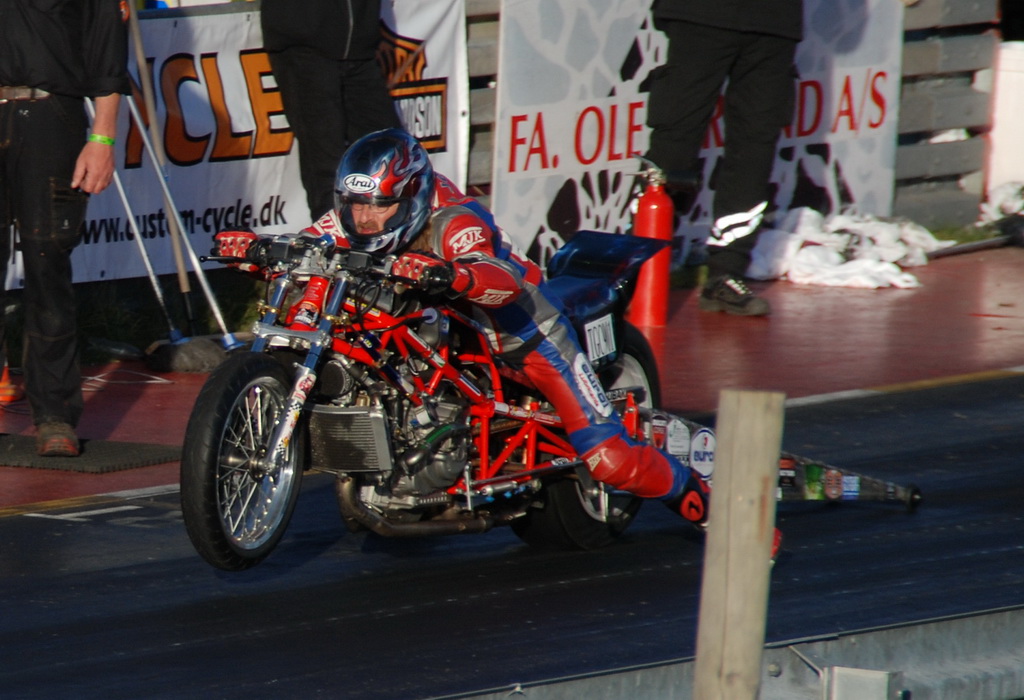 Herman feared that Stefan Andre and Harry van Schie could pass him in the qualification list, and so they did. 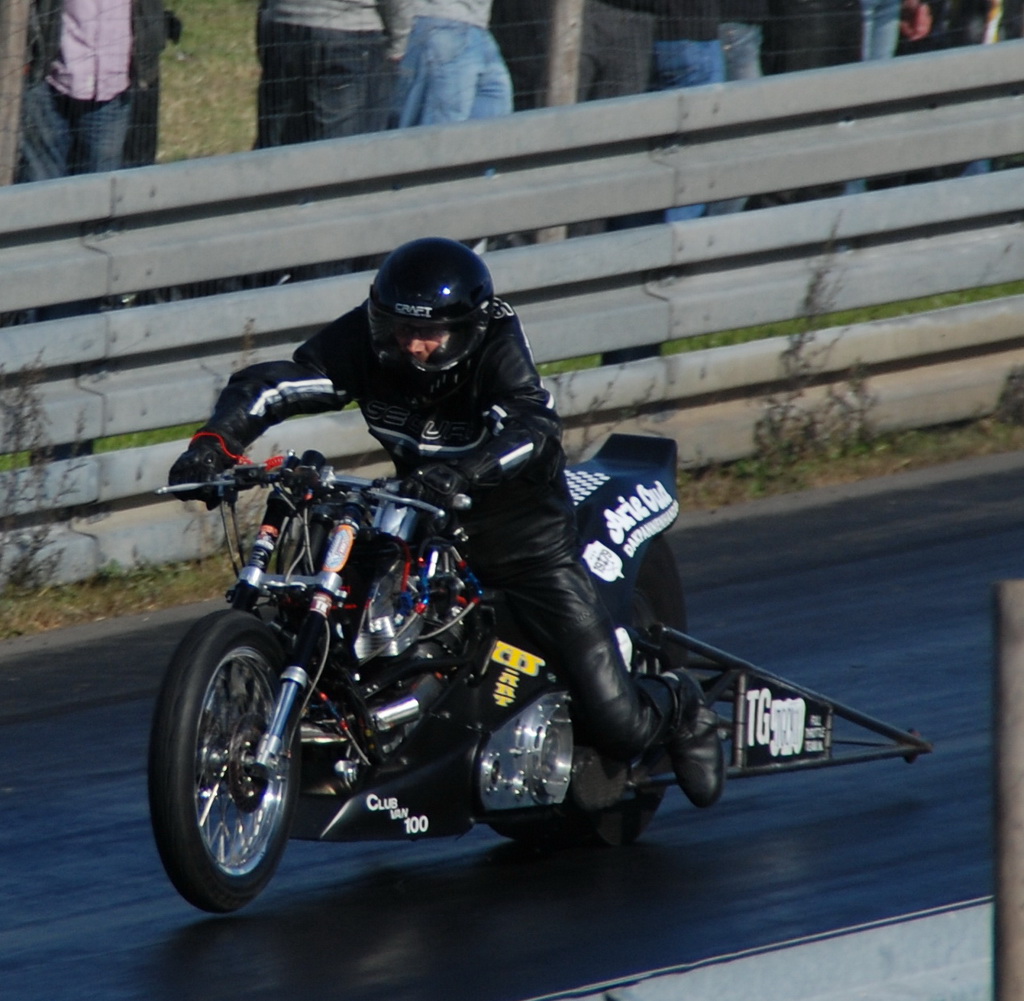 On friday evening Harry blasted his supercharged Harley down the track in 4.98 seconds during a nice and straight pass. 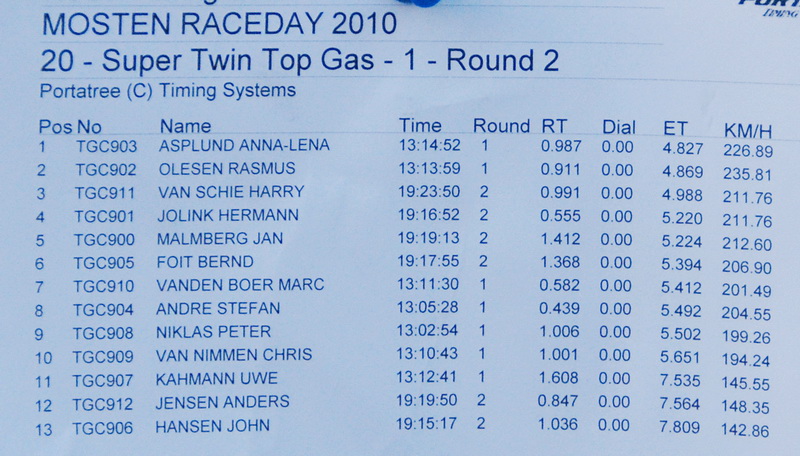 Marc van den Boer was now virtually unable to take the second place in the championship from him. 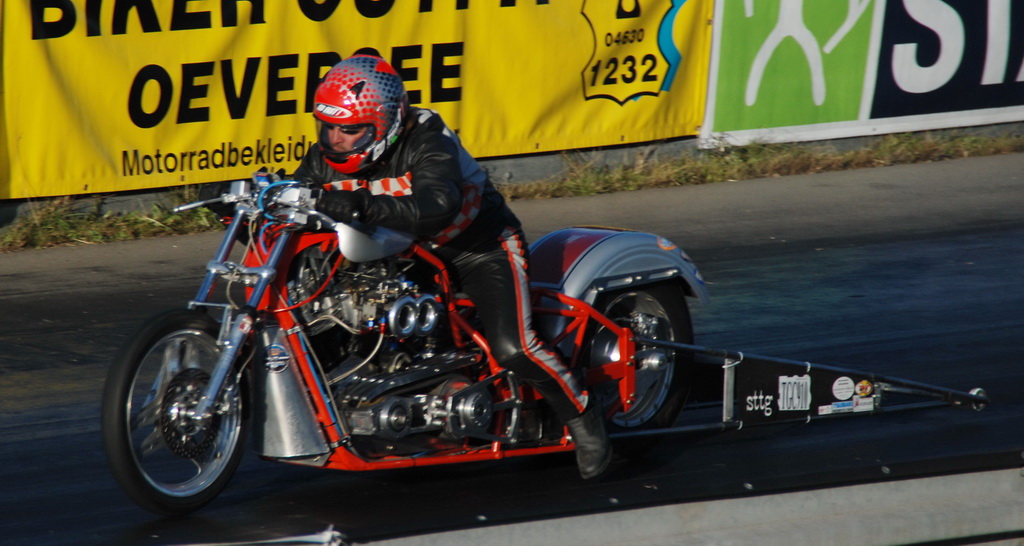 Stefan Andre damaged his gearbox, but was able to repair the "sixpack" with only damage to the shift forks. 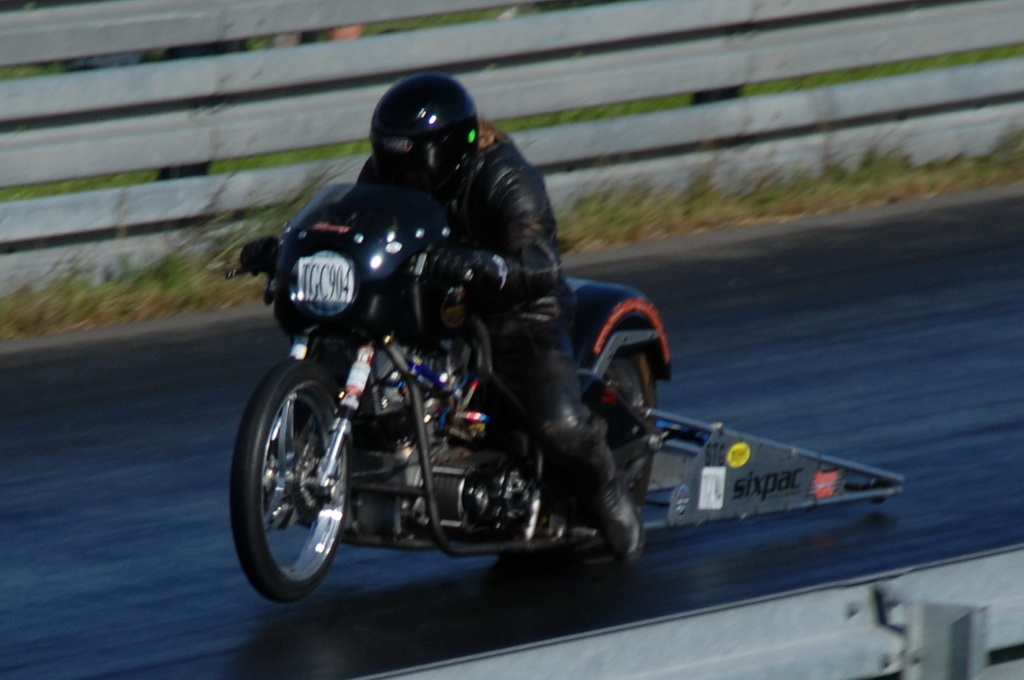 After repairing it, he first passed Herman with an 5.10 and later took the third place away from Harry with a 4.95. 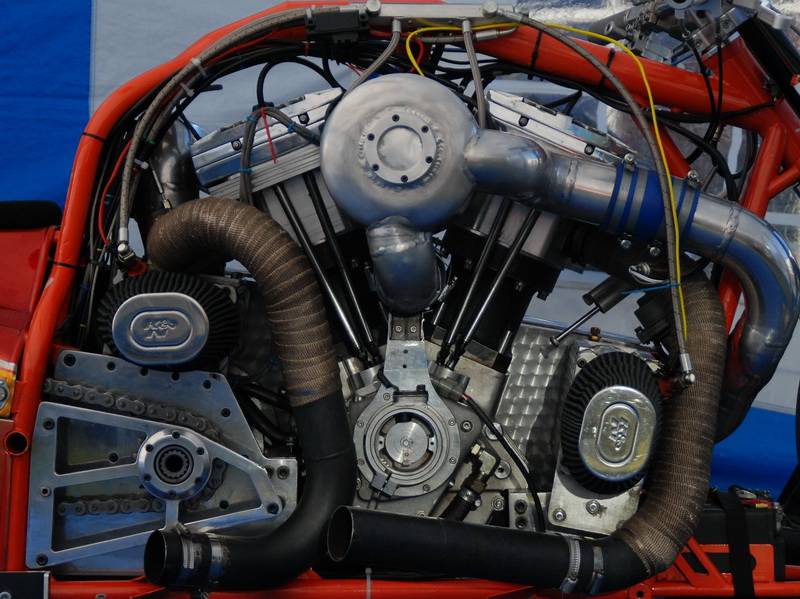 Jan Malmberg did a 5.224 with his twin blower Harley. 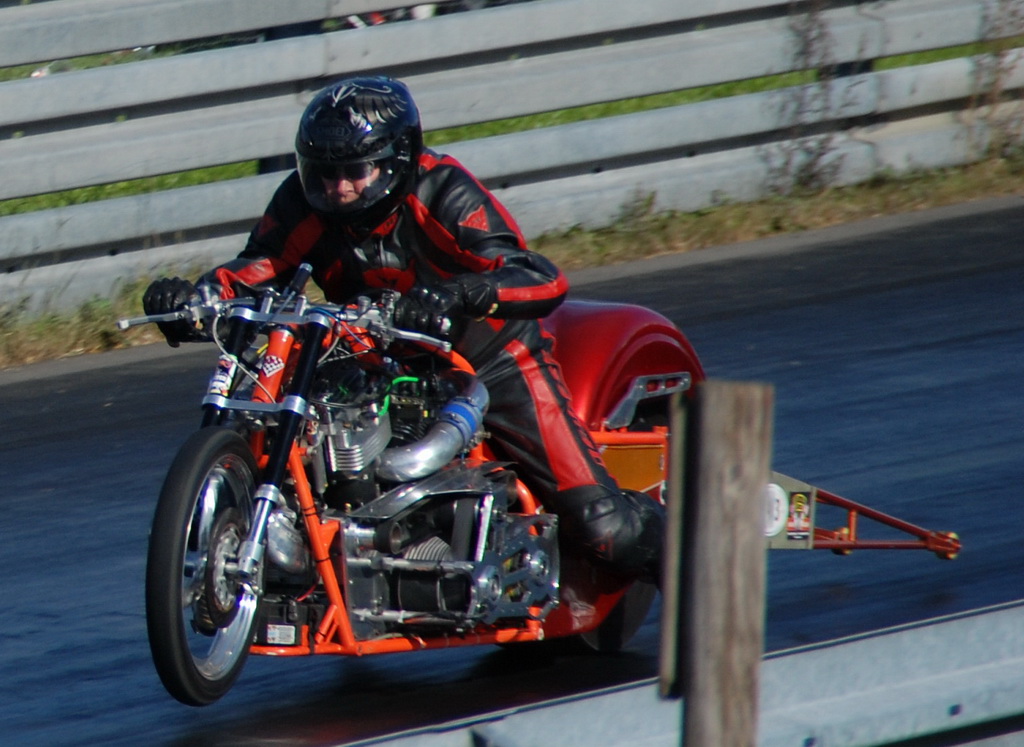 Herman Jolink stepped up a bit to stay ahead of Jan, 5.220 was Jolink's time, and he survived the first day at place # 4. Saturday morning Herman even went quicker, 5.19. a new personal best. 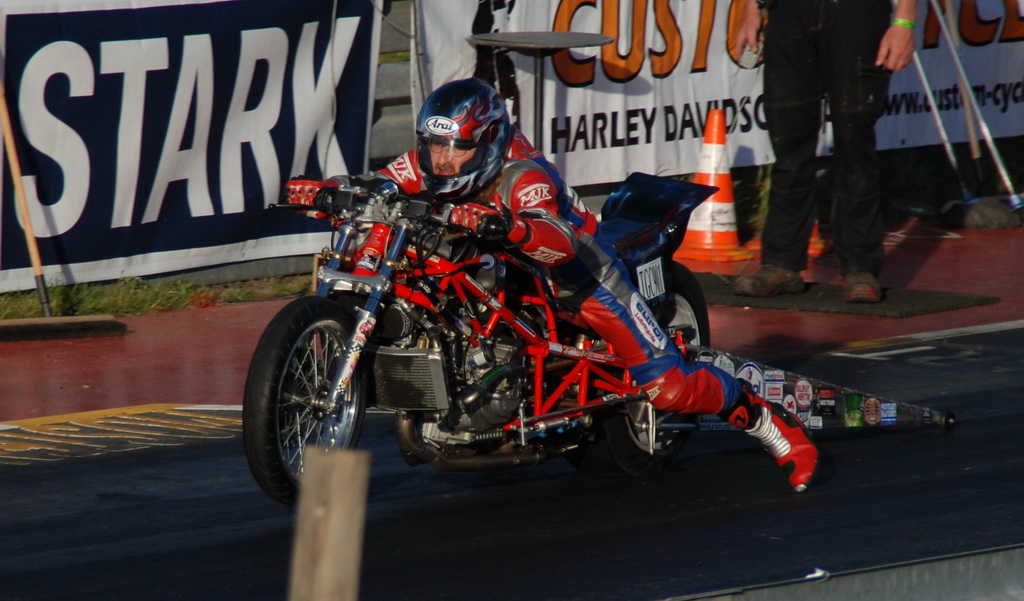 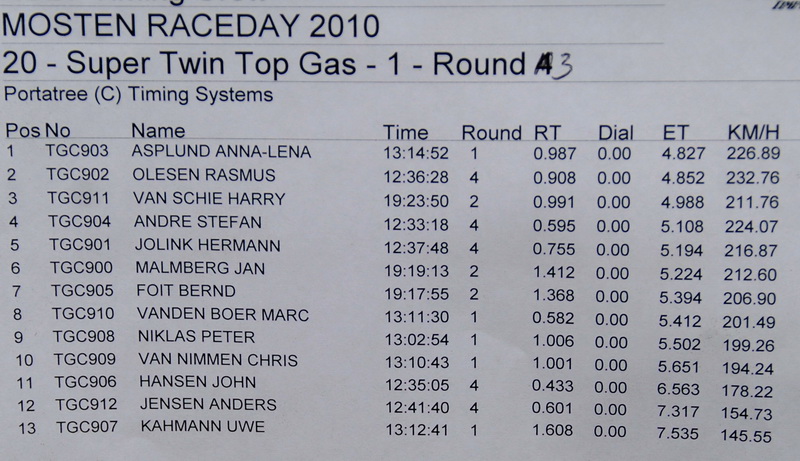 Peter Niklas needed to get on place #9 to pass Frank Heitmann in the euroserie and grab the 5th place.

And so he did. Team Sideburns made a big step forward with the turbo-Honda this season. But the last few races they are blowing gaskets.
Our former STTG member/racer Kai-thomas Heize sold his bike to team Oakland Orange of Mr hansen who raced it on friday.
On saturday Kai-thomas did a "guest-performance" riding his old bike. 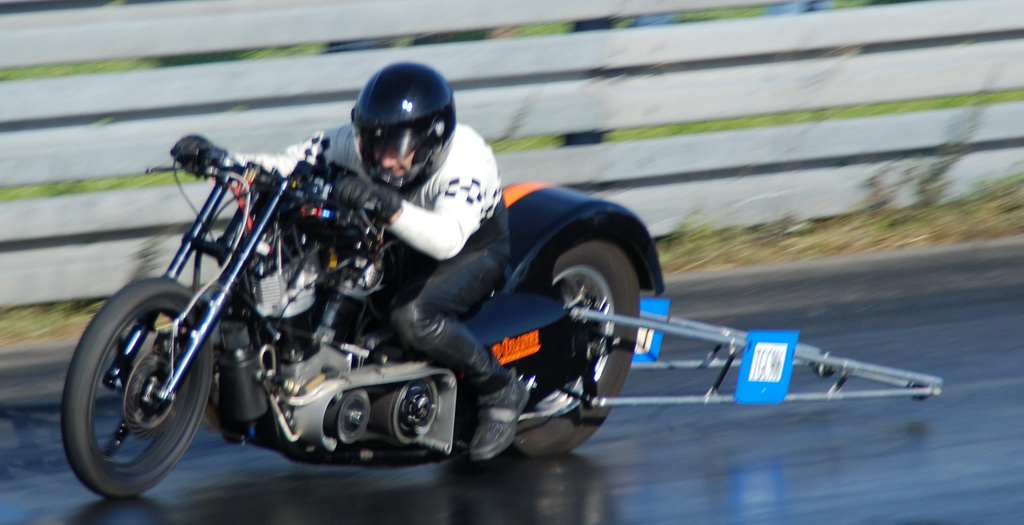 German racer Bernd Foit is a fanatic racer. Too bad a lot of broken parts kept him from racing down the track very often in the past. 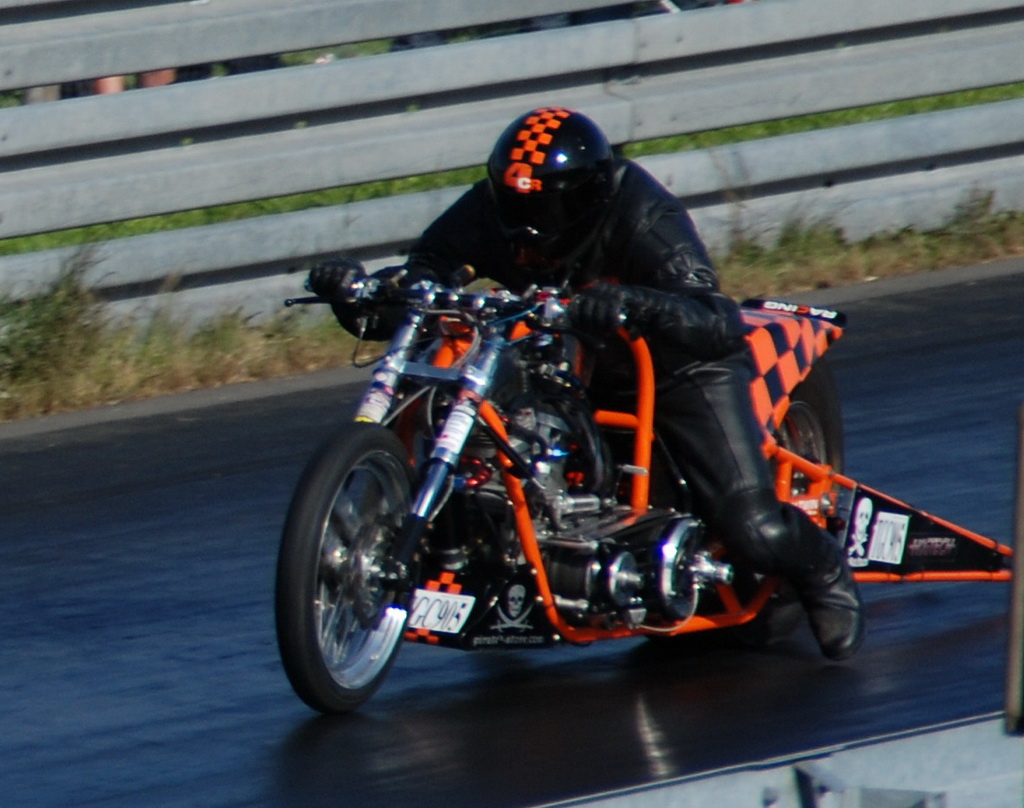 But the Mosten raceway was a good place for him. Bernd Foit supprised us with a 5.394 second pass.

We saw the second appearence of Uwe Kahmann, and just like in Hockenheim, he did not come last.

The last round on satuday gave another set of quick runs.
Marc van den Boer went quicker, and so did Herman Jolink. 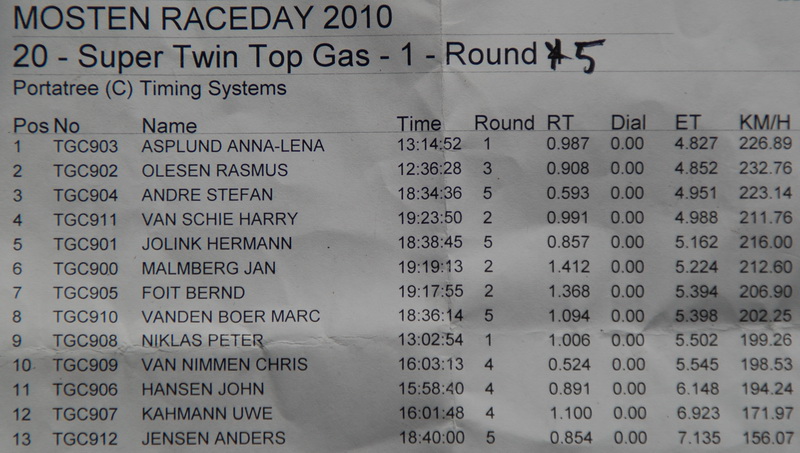 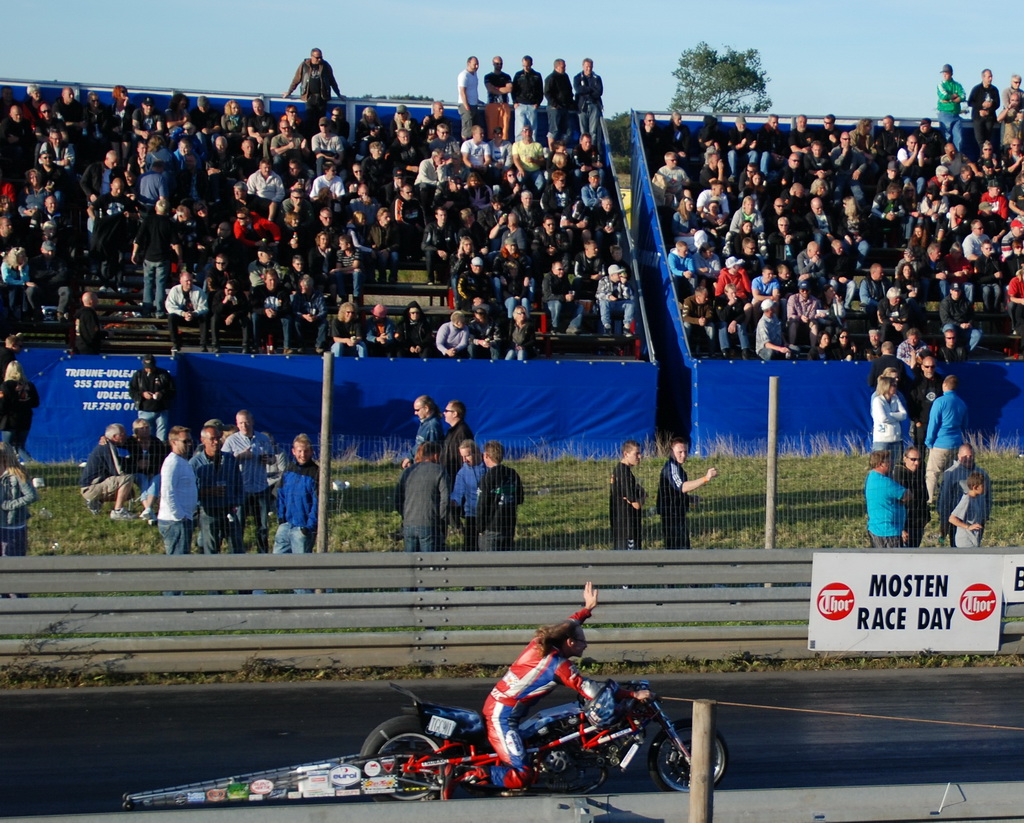 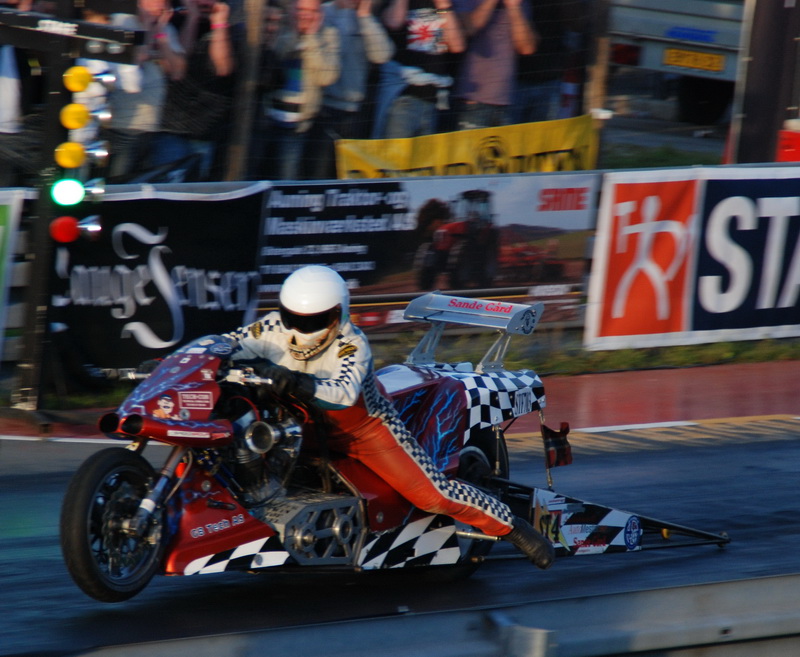 Ricard Gustavsson from Sweden became " the King of Mosten" after doing 200 meters in just 4.15 seconds. 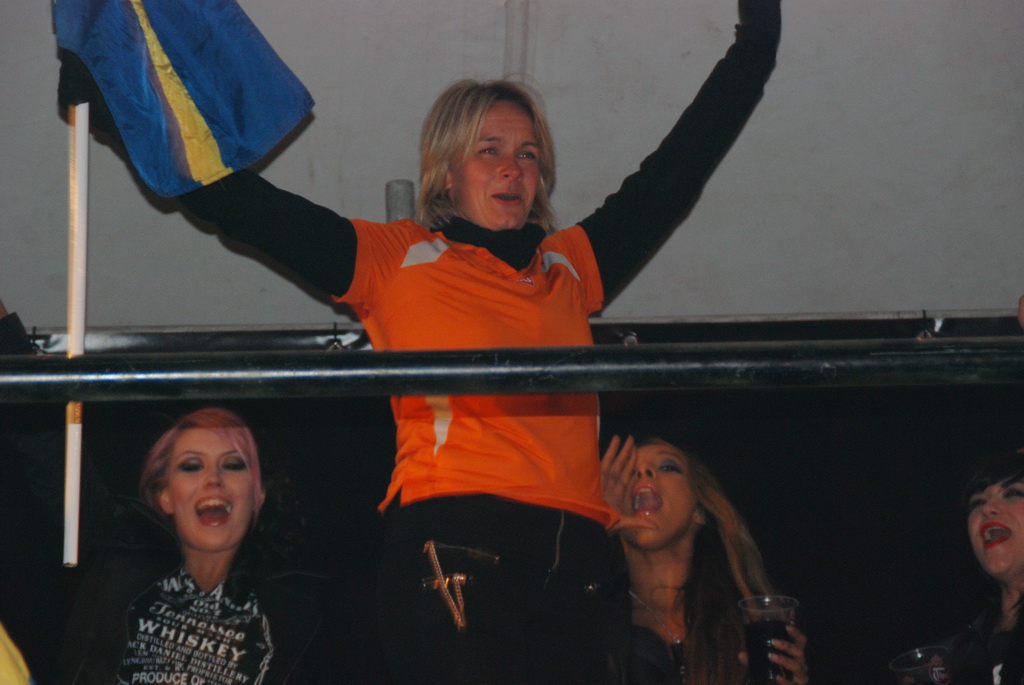 Many thanks to Mosten MC for having us. It was great racing in a relaxed atmosphere.

And what a track!

Most of the above pictures are shot by Petra of van Schie's Full Throttle team.

The season was not over for some riders.

They went to Brustem airbase in Belgium on the 25th and 26Th of September.

Eurodrag and eXplosion made a huge effort, and DHRA was there to do the timing.

A jetcar, stunt bikes and a rockband were hired to entertain the crowd and about 100 teams on the entree list.

But only a few spectators showed up, bad weather spoiled a lot of the fun and, worst of all, the track was in terrible condition. 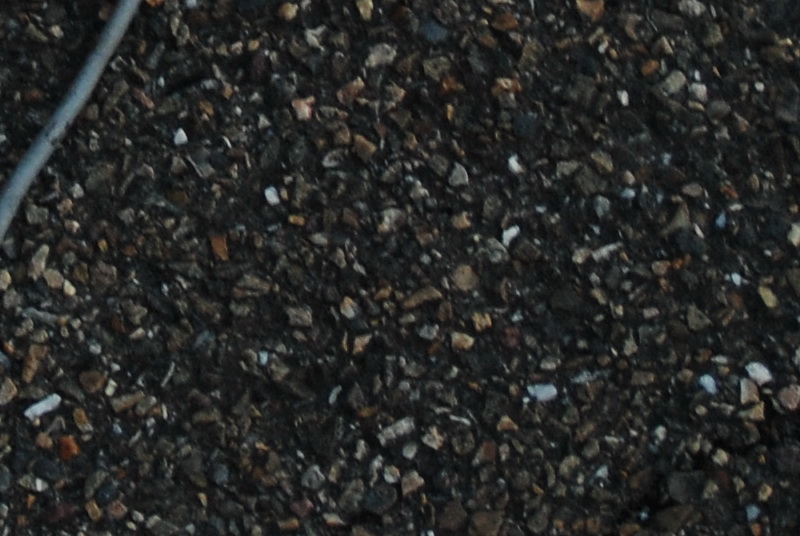 The above pictute shows an unprepaired bit of the track just behind the guardrail. Almost impossible to turn that into dragrace asphalt. Even working on it for a whole week could not do the job.

The topgassers decided to only race the 1/8 mile. Except for Lando Beugelsdijk, he decided no to run at all. He just finished building his Buell, and did not want to damage it. I think that was very wise.

Four man left to race it out, and Harry van Schie was quickest with a 5.900 and 211 kmh. Here you see Jaap aiming Harry and the bike before the launch. 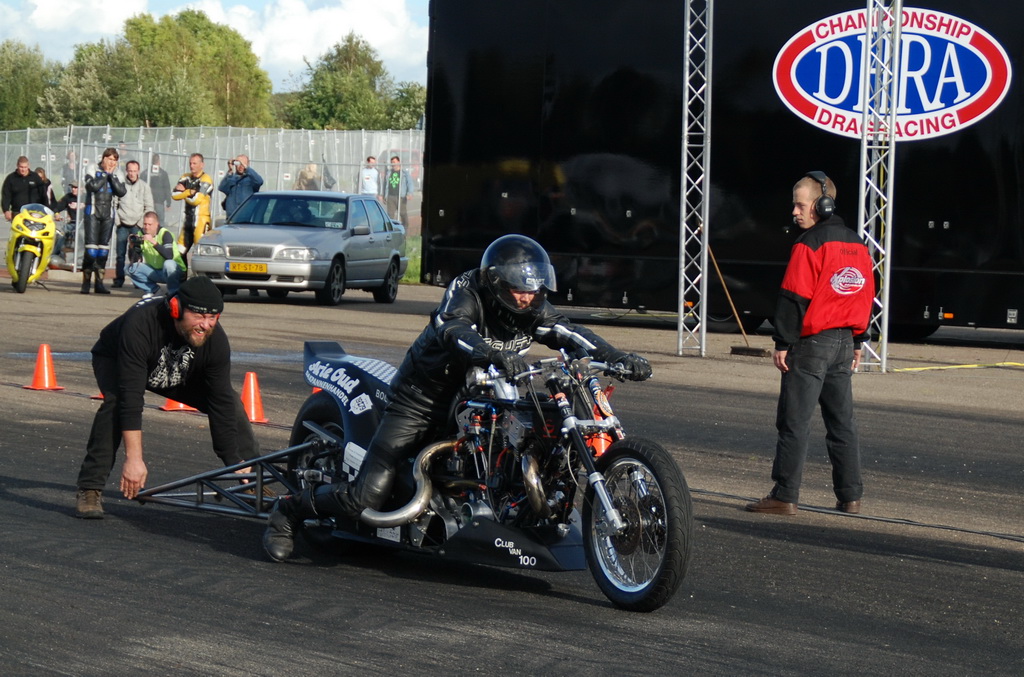 Peter Niklas only made one poor pass. 7.57 seconds. On his second attempt the engine backfired badly while Peter smokes his rear tire. 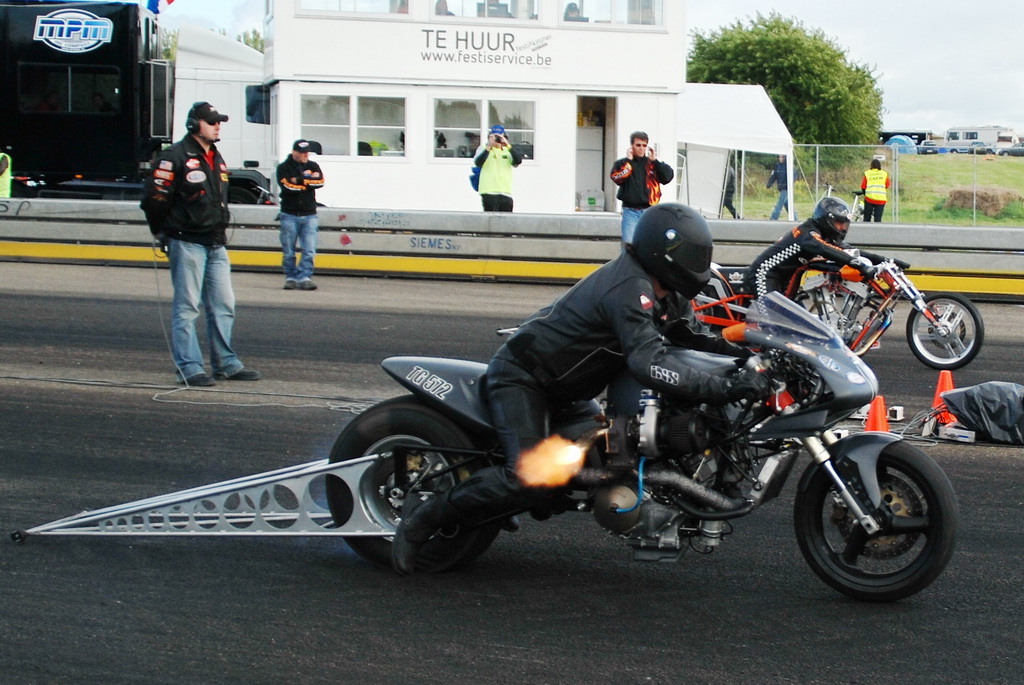 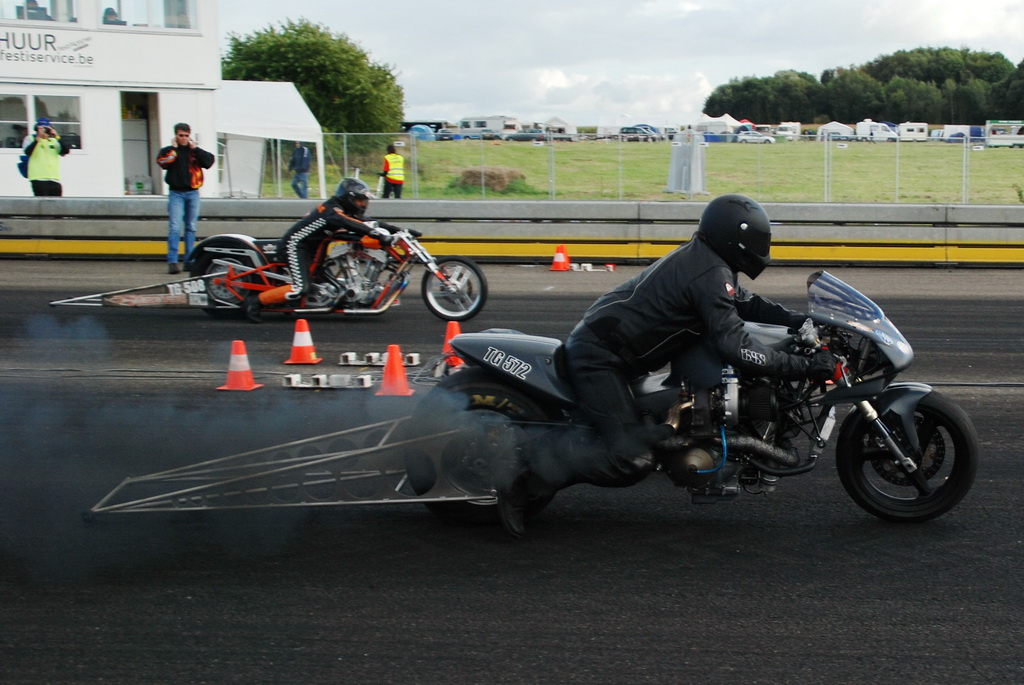 Niklas' team tried one more time to get the Honda going, but during the third attempt the engine died and Peter declaired his season officially over.

Marc van den Boer was chasing Harry, and did a 6.1 and a 6.0, and his team got excited when they saw a 5.9 at the scoreboard after the last round on saturday evening. 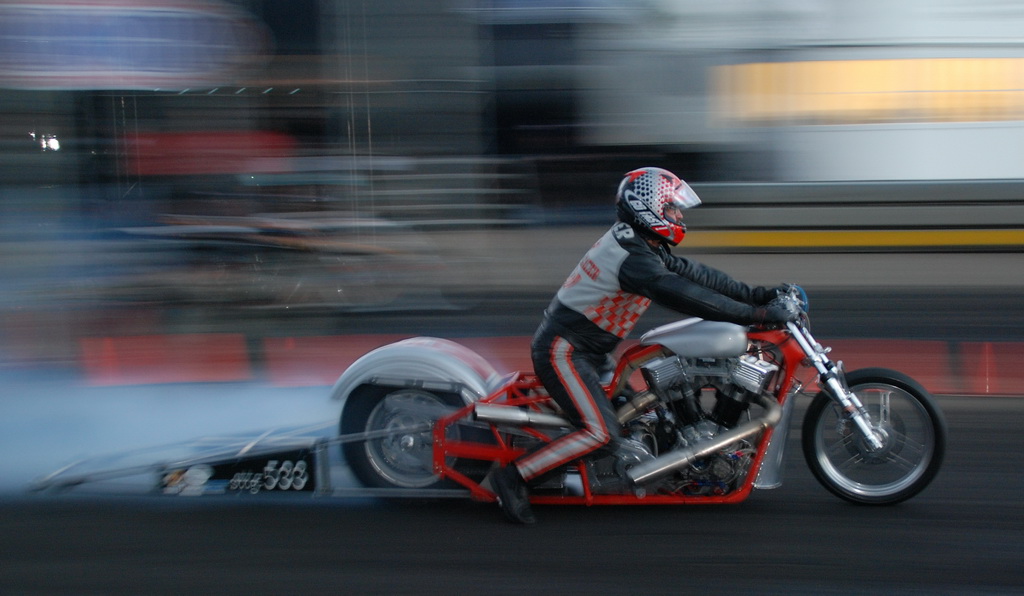 But when the saw the list the learned Marc was 0.038 seconds too slow to pass Harry. Just after that, it started to rain, and the nightshow was cancelled. Donald fired his jetcar one more time on sunday in between the raindrops and that was it for Brustem.