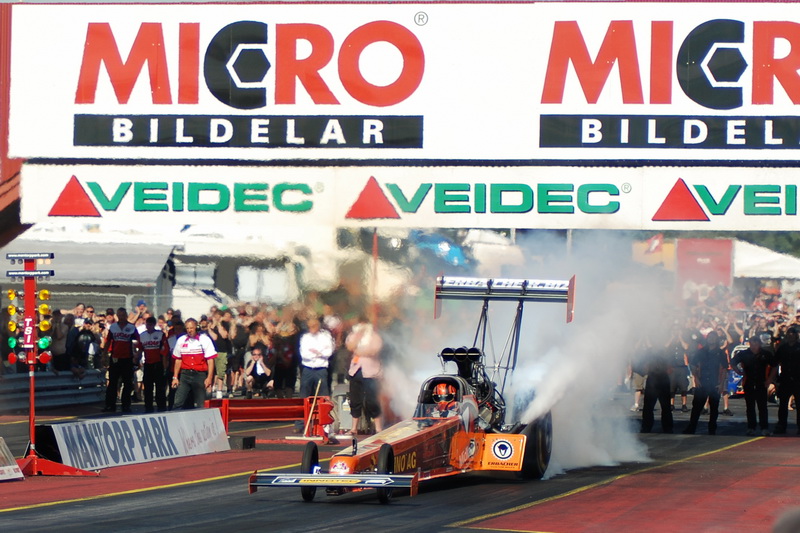 The last weekend of July, and a huge entree list.
Like 43 junior dragsters qualifying for a 32-field dragrace!

The racers were very curious about the grip of the new asphalt on the track.
But before they could try it out, they had to wait for dry weather.
It rained all thursday, friday was a cloudy day, and the qualifications had to be stopped for a few hours.
The UEM and FIA classes only had on attempt that day.
Supertwin topgas class was racing for points in both the Nordic and European championship.

Bernd Niessen was the only Euro-racer in the strong eight field. He was the first to arrive on wednesday when the weather was still great. Below you see his bike and mechanic Gerd Caspari. 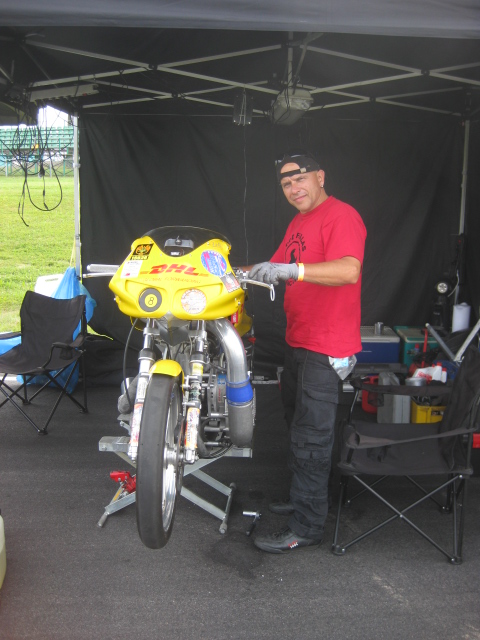 Nordic champion Janne Gustavsson was one of the favorites, 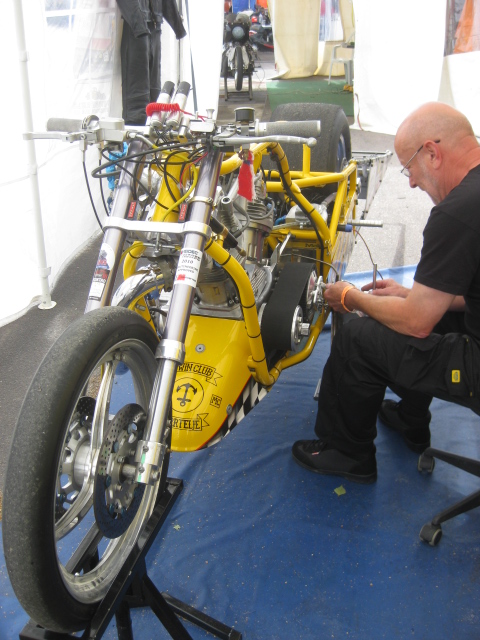 and so were Anna-Lena Asplund 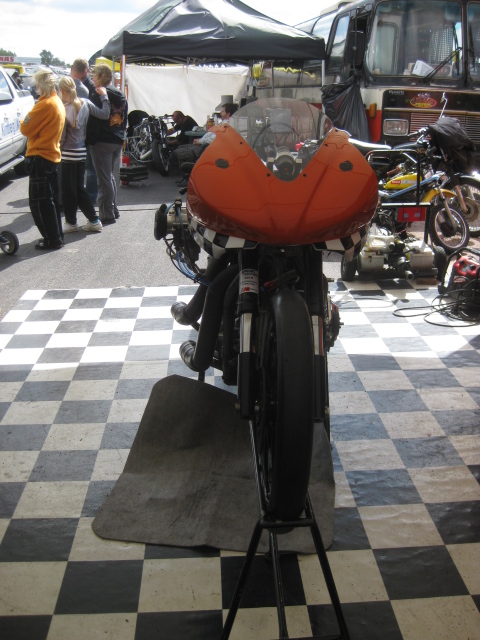 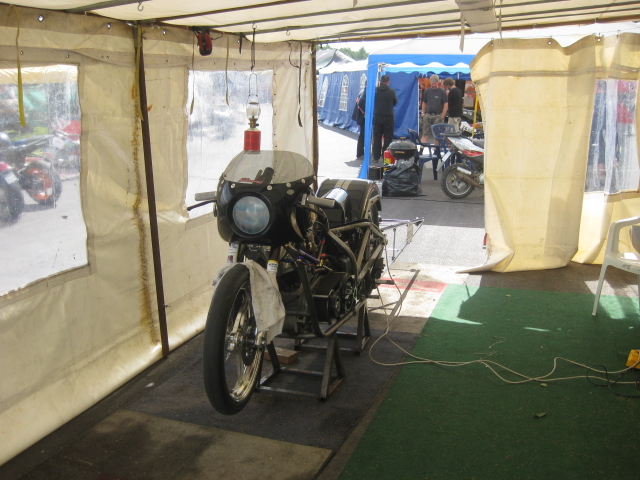 Besides getting the bike through tech inspection there was not much they could do, the first two days.
They had to wait till saturday and get up early. Track open at eight. Qualifications of STTG started at half past nine.

Janne was quickest: 8.082 sec., Stefan did 8.142 and Anna-lena was third with 8.241seconds. Andre and Asplund must have had a strong cup of coffee for breakfast. Both riders had a 0.03 seconds reaction time. 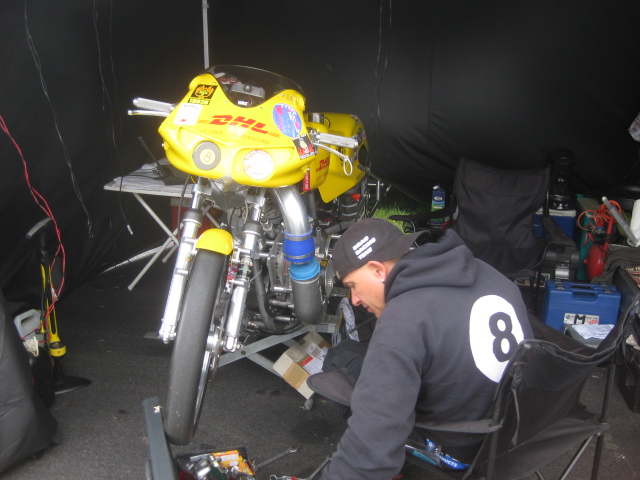 Bernd Niessen's time was disappointing. "We have a problem with the belt drive to the charger in construction, so we have to change this in general". So back to the drawing board for team Eight Ball. 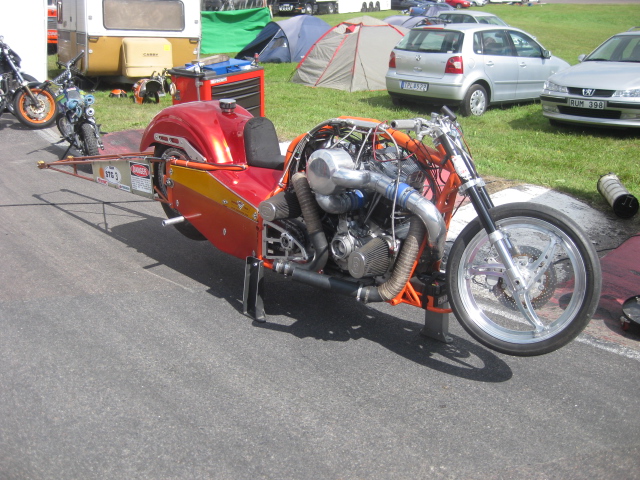 Jan Malmberg uses two blowers, and is on a good way. 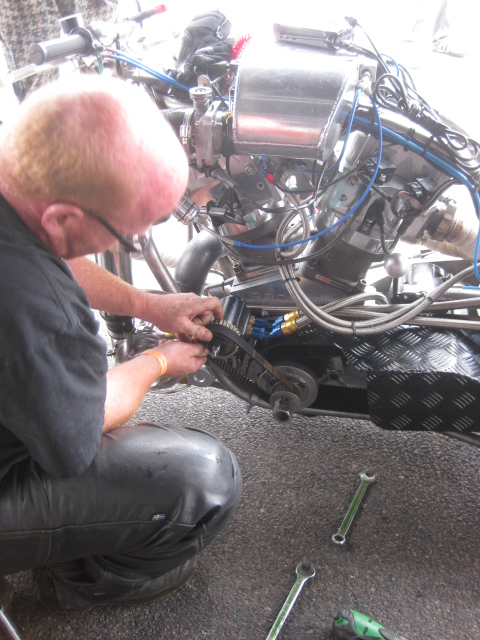 Mats Larsson put a turbo on his engine which in its first runs ever did not run that well.

Ari kosonen was a member of our class in the early 1990's. 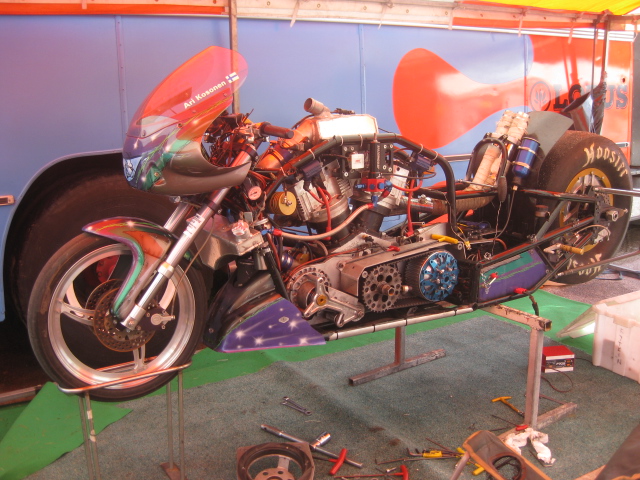 Great to see him on the entee list. His Finnish team uses an Overkill engine and a charger, and it was also not running well. 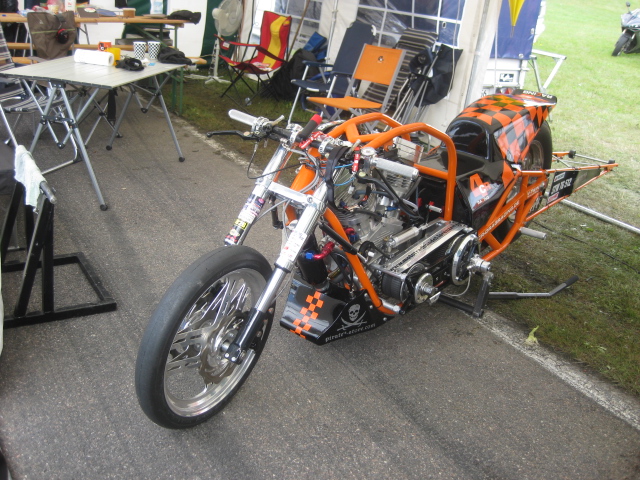 Bernd Foit did not start. His bike spit out some small alu parts during warming up. 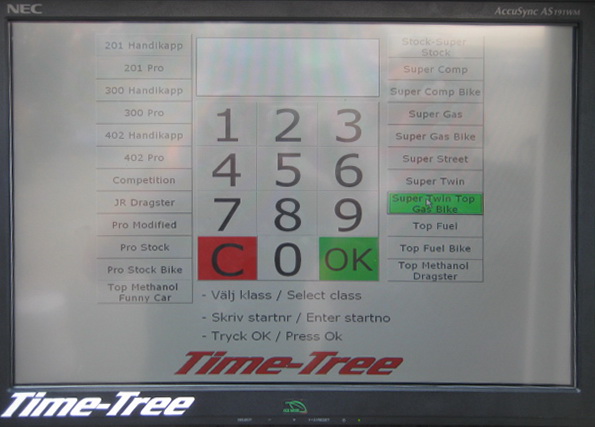 The time slip machine is a great one. You go there push in your class and number and get a time slip whenever you want. It gives calculations of the whole day and more. Great idea! 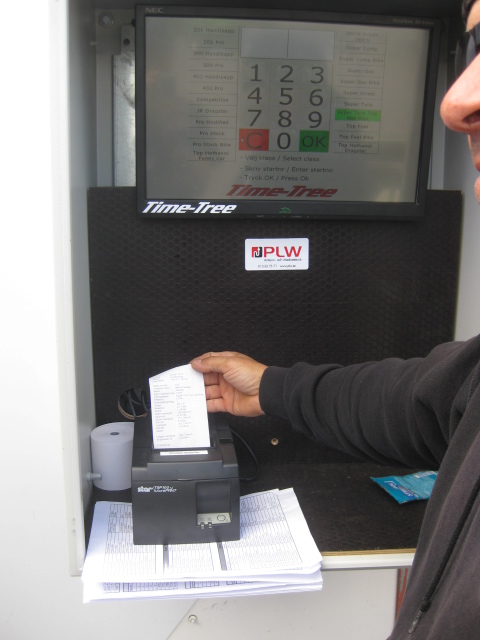 Anna-lena took over the lead with an 8.07 in the afternoon after the second (and last) qualification round, and a flowchart was produced:

Again an early rise on sunday, with the track open at nine, ready to start the eliminations.
But some rain was predicted in the morning, and took it until late afternoon before the track had dried up.
The FIA and UEM classes had priority in Mantorp, so the topgassers could pack and go home.
After not even an hour of dragracing, (pro mod cars and one pair of top fuel dragsters) the rain came down again, this time by buckets flooding track and pits, so the rest of the event was officially cancelled!

The other twin bikes:
Pro Stock:
Ulf Ögge did a clean run but he did a red light with no time, so he missed the ladder.
Our champion Jesper Thiel sold his black "Iron Bike" and now raced Tinndahn's Buell in Prostock bike class, and qualified third with a 7.3. Well done Jesper!

The new owner of Jesper's old bike, Hungarian Zoltan Toth, did a 7.7. Zoltan had rented Brian Glaesner's bike for the first half of the season. It looks like Brian is going to put Rasmus Olesen back in the saddle.

Top Fuel: Jaska Salaskari raced two bikes (#53 and #56), one in Top Fuel Bike, and one in Top Fuel Twins In Top Fuel (56) he did a great looking 4.12 sec. at 298 kmh at the eight mile. Only Peter Svensson managed a better time. The motors in Jaska's bikes have the clutch and drive chain directly connected to the crank shaft, so no primary belt or gearbox is needed. 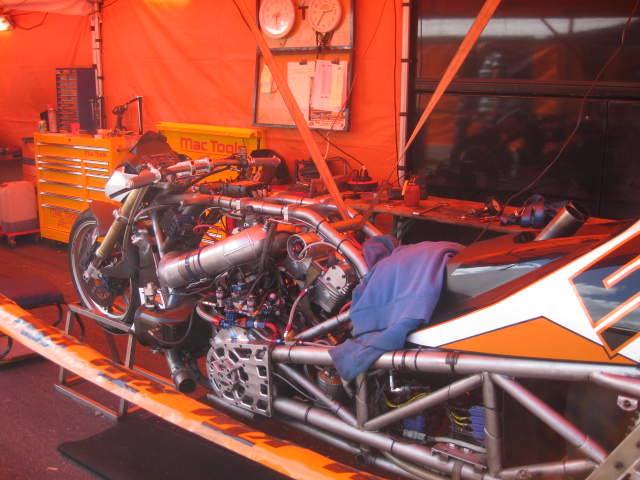 The drive chain is hidden, it runs inside a frame tube.

In Supertwin top fuel, Per Bengtsson was quicker on the 1/8 mile then all the others. 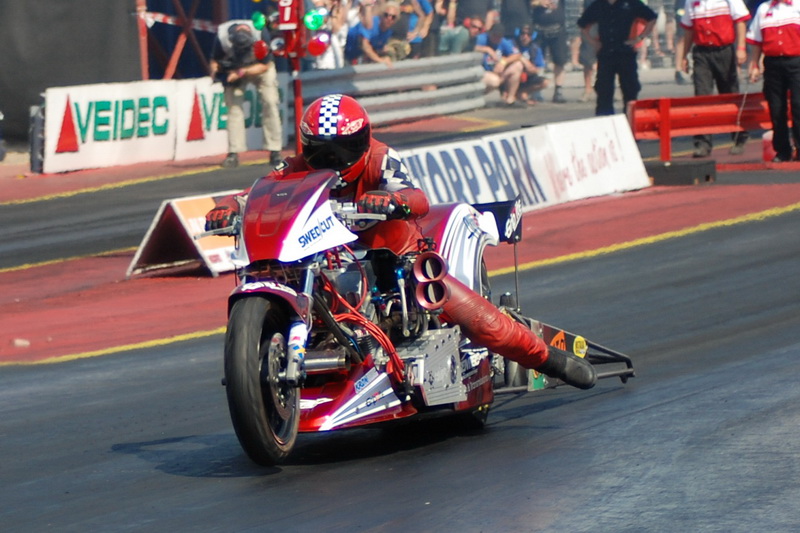 Per has the parallel twin in the bike he calls "the Beast", while his eighteen opponents used a V-twin. "Move your barrels together, boys!"
Job Heezen leads the point list for the UEM championship.

After his disqualification at Drachten2, Herman Jolink fixed the ground clearance of his bike and went to test some more at Bechyne, Cz., one week later.
Jolink qualified #2 in Competition Bike class with an 8.5. Too bad this race was also cancelled because of rainfall and a failing timing equipment on sunday.
Our former champ Roman sixta was also present to test his fueler before going to Mantorp. Good to see he did a personal best.
Watch the video (skip the first 20 minutes) here.

The next race, number five in the euro serie, will be the Nitrolympx at Hockenheim, Germany.
On the entree list are sixteen topgas teams so far, including Stefan Andre, Anna-lena and also Uwe Kahmann, who we have not seen on the track yet this year. And we will see the come-back of Rasmus Olesen on Glaesner's blue 3000 cc XB12R Buell.
See you all there. 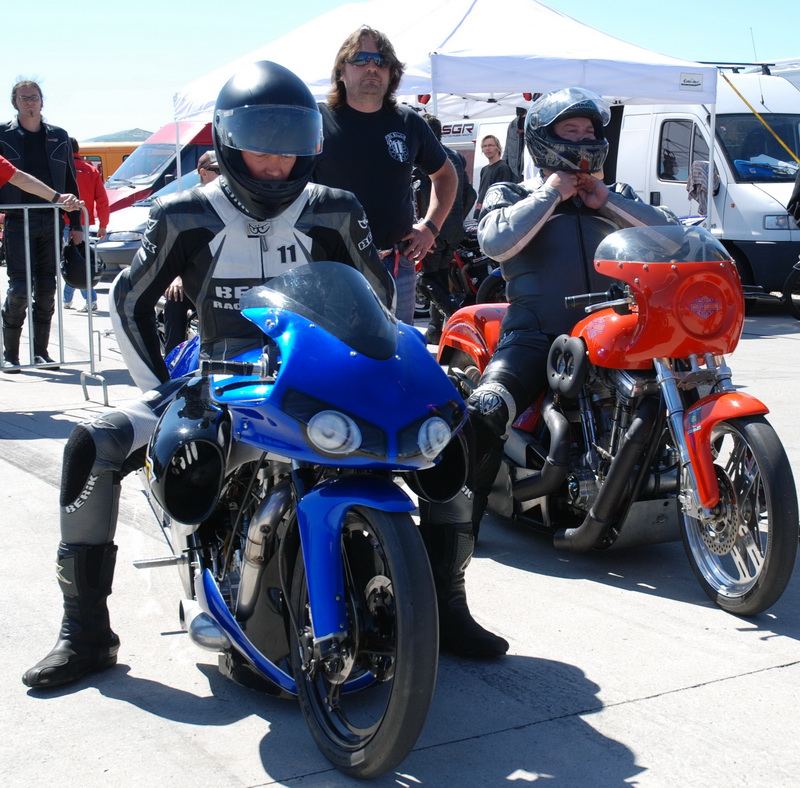