It always rains in Drachten! If it's not coming from the sky, like the last 5 times, then it's raining personal bests.
All the sunshine that we lacked for so long was given back to us at once. Just like in a drag racing, the sun was attempting to break the record, reaching a climax in a blast on sunday!
All riders and drivers were very motivaded to make it happen and so was the eXplosion crew.
Many nationalities on the entree list, including Sweden, Norway, Denmark, and Switserland, 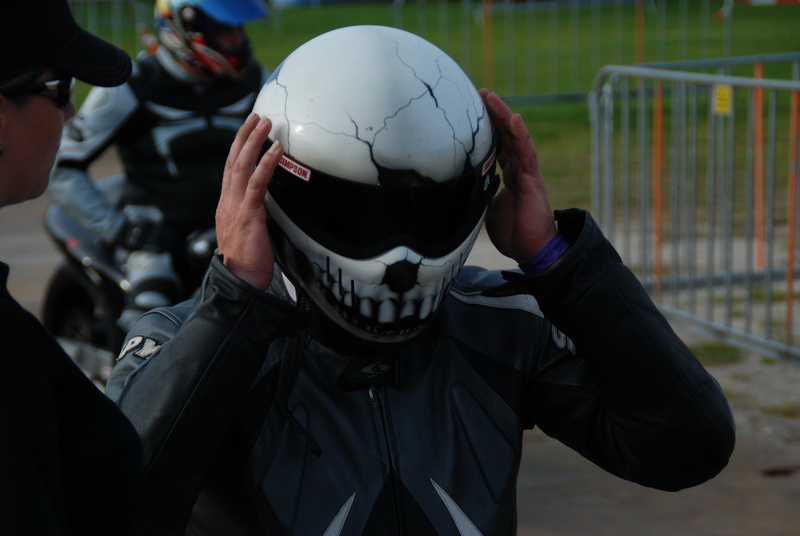 besides the regular visitors from Germany, Belgium and the Czech guy in topgas.

Bavarian Simon Lewis was camping between Van Schie and van Nimmen, so the three topgas Harleys were lined up at the front row of the north side of the strip. The team of Van Nimmen relaxed at a campground after Hockenheim and occupied a spot right next to them for Marc van den Boer and raised the Belgian flag as a signal to let the party begin. Marc arrived in the evening and unloaded his homemade blown Harley dragbike. 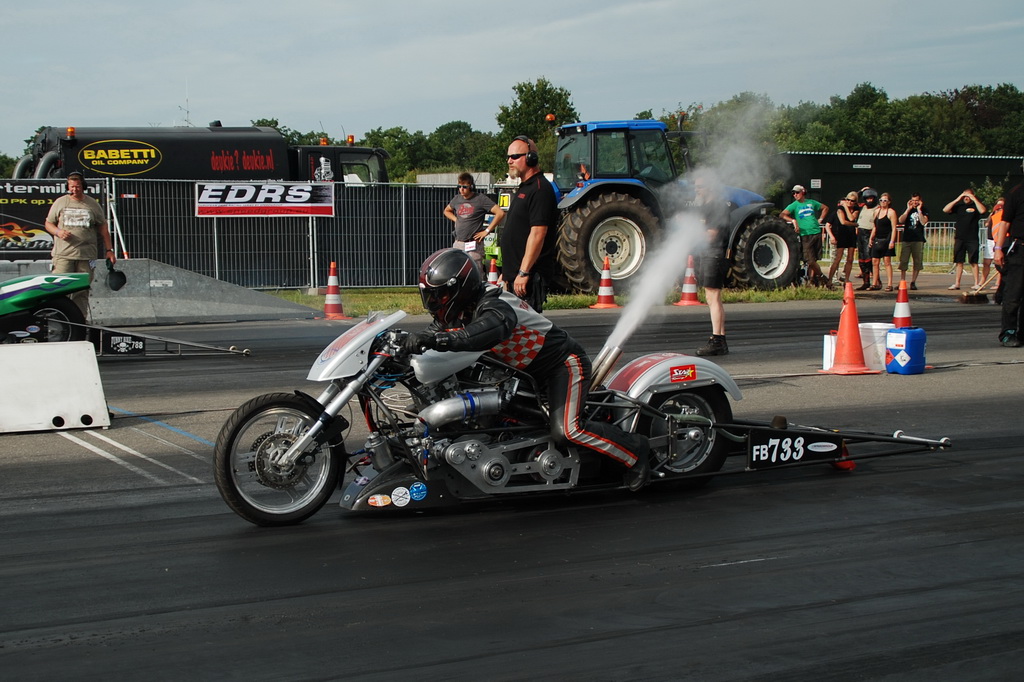 He runs it on methanol for a year now, and enjoyed every minute of it.
In Drachten he took his PB down to 8.24, qualified #3 and made progress getting the Gremlins out. But his lazy reaction caused him to loose in the quarter finals, with 8.255 while his oppent did 8.321. Watch it happen below.

Marc is confidently looking forward to his next event, Mosten Race Day in Denmark.

Team Motoraey choose a more isolated spot for their base camp. Luc Raeymaekers on the Kawa Funny bike, with his friend Marc Geens and son Jonas racing in the 10.5 index class. 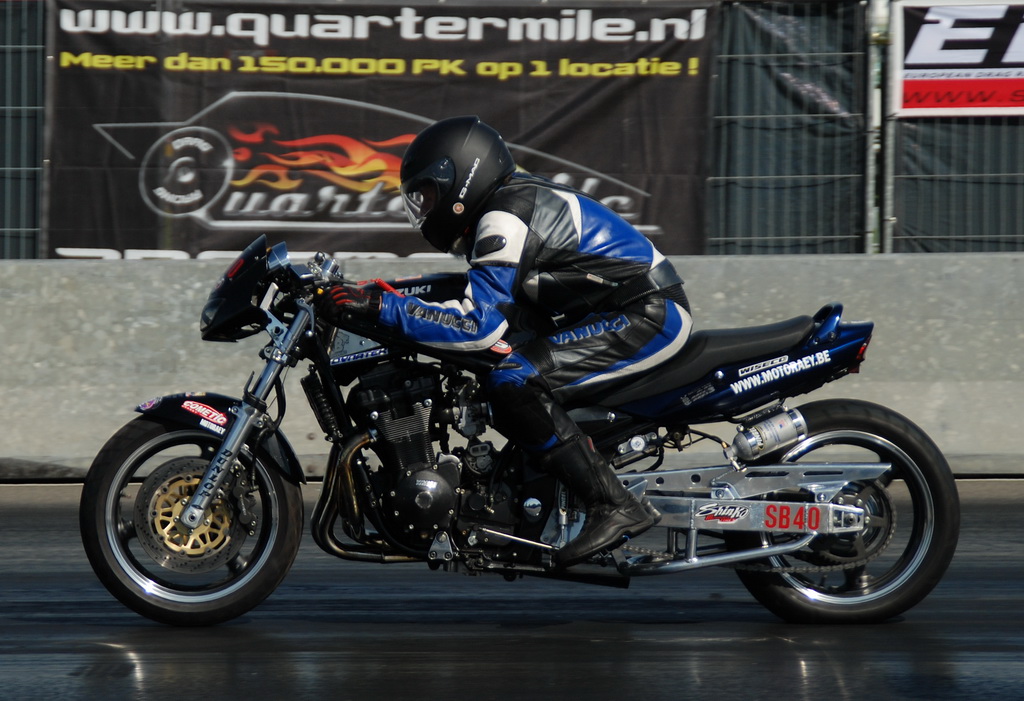 Despite a lot of late night wrenching by Luc, and the enthousiasm of his son, "Gust" Geens was the most succesfull Belgian biker at Drachten that weekend.

At half pas eleven on friday morning, all six topgassers were in the line-up for the first round of qualifications, but all we saw was three runs over the full quarter mile.
Herman Jolink left the startline, then the motor stopped.

Not enough revs, not enough throttle. 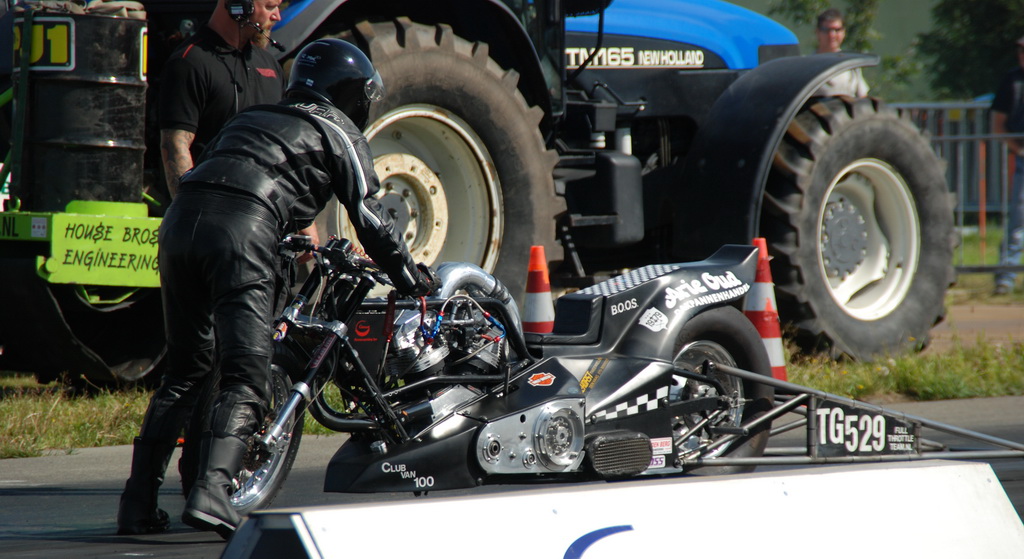 A bolt that holds the wheelybar broke after Harry van Schie's burn-out. Team Niklas had trouble starting the bike, and then found out there was no compression at the front cylinder, so Peter was busy wrenching on the head for a while. 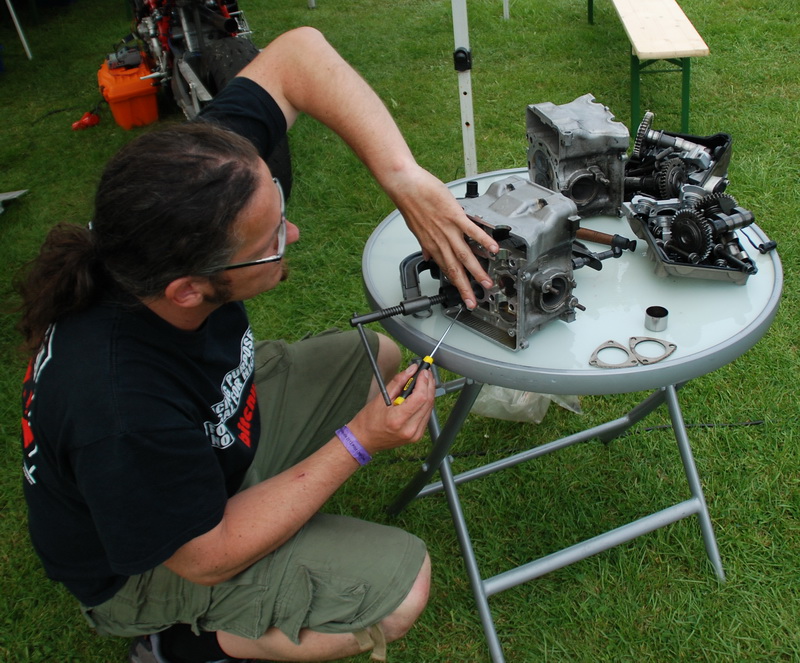 Milan Kolacny, leading in points, did an 8.7 and landed on top of the list, followed by Chris van Nimmen with 8.8 and a 14.4 for Simon Lewis. Here's a picture of Chris on his S&S-twincam Harley-Davidson: 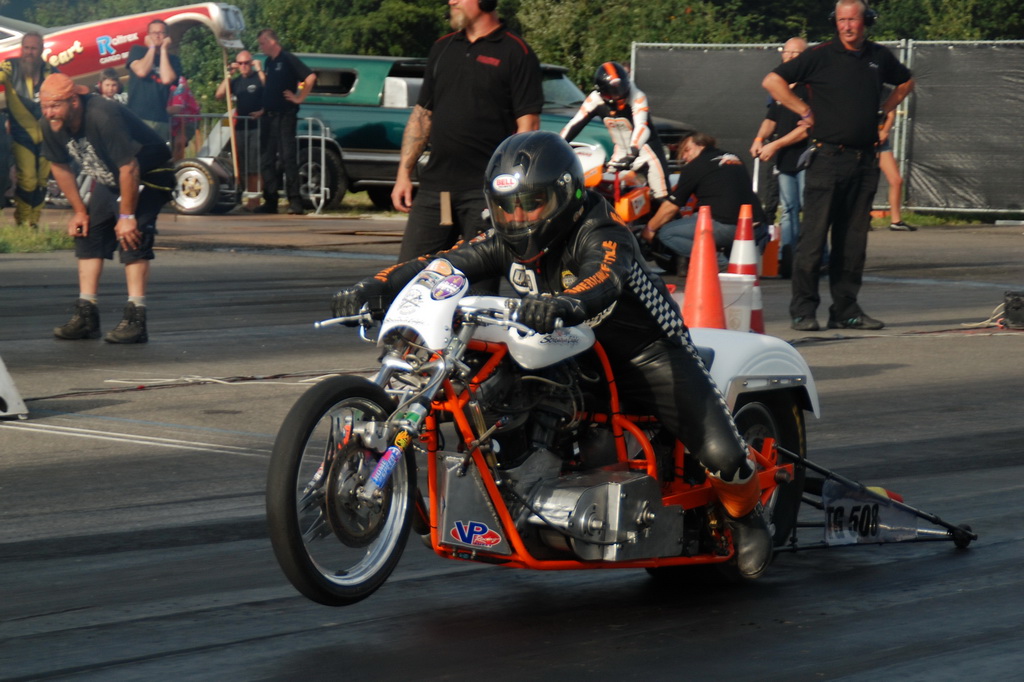 In Funnybike, Marc van den Boer did 1.17 60-foot, but severely damaged his prime belt. Later he found out he'd better use a different model. A little crack in the fuel tank was welded up by his son Jim, who was busy all weekend helping out other teams too.

Superstreet biker Michael Merse heard strange noises after he started, and went back to the pits. 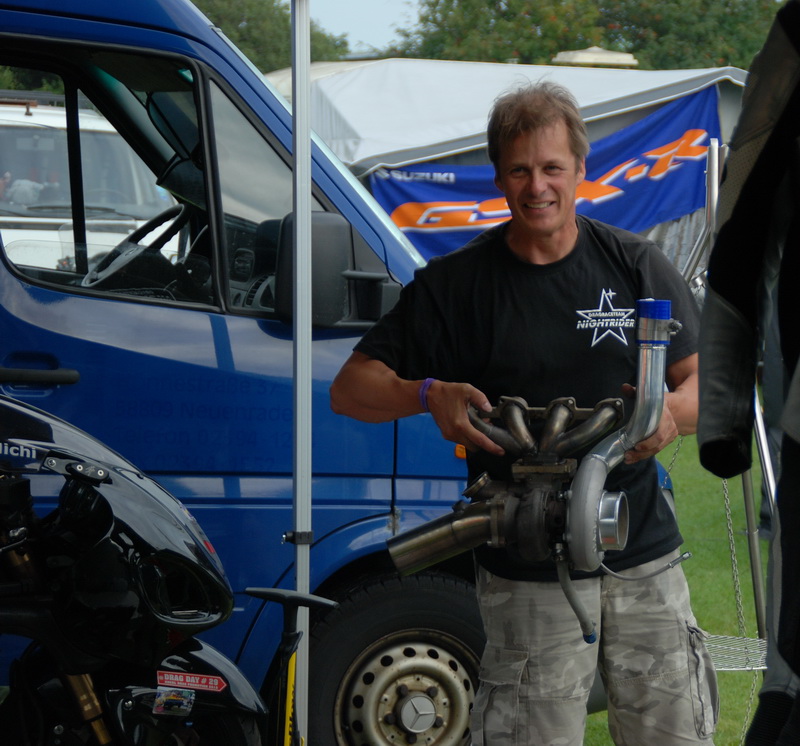 Checked the Hayabusa and phoned his friend Chip to take a spare engine with him that evening.

Milan and van Nimmen chainged a sprocket to gain more top speed. Van Nimmen at the front, and Kolacny the rear wheel. At 2:10 PM, Herman Jolink was in good shape at the start of round 2, and did an 8.430 and took the lead. 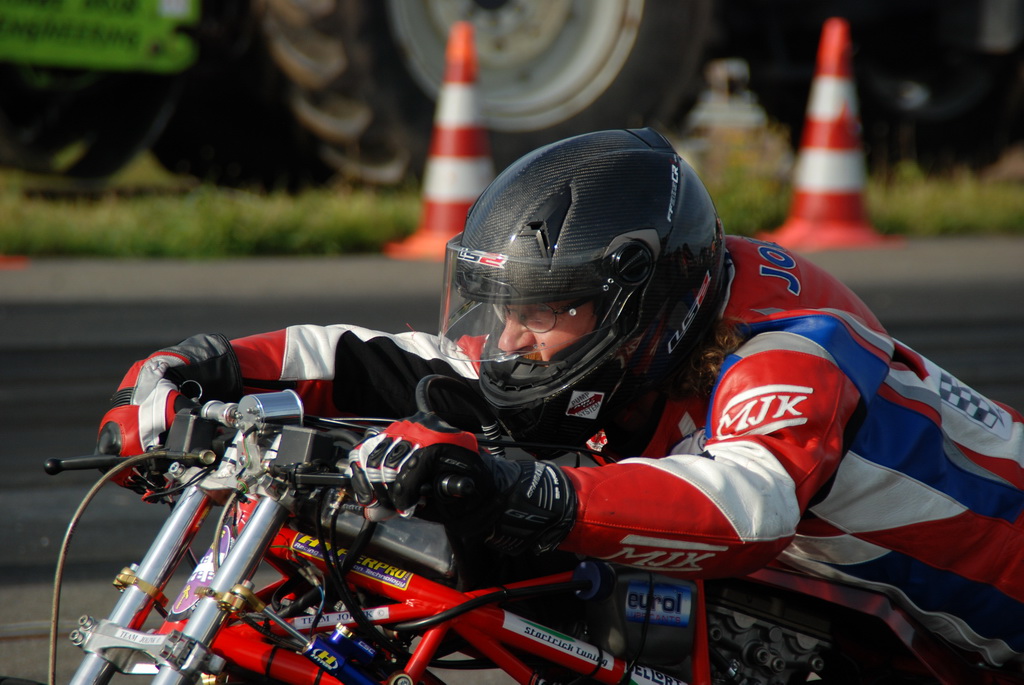 But he forgot to change to the sixth gear at the end, so there could have been a lot more in it. Harry van Schie did an 8.5 with 242 Kmh, 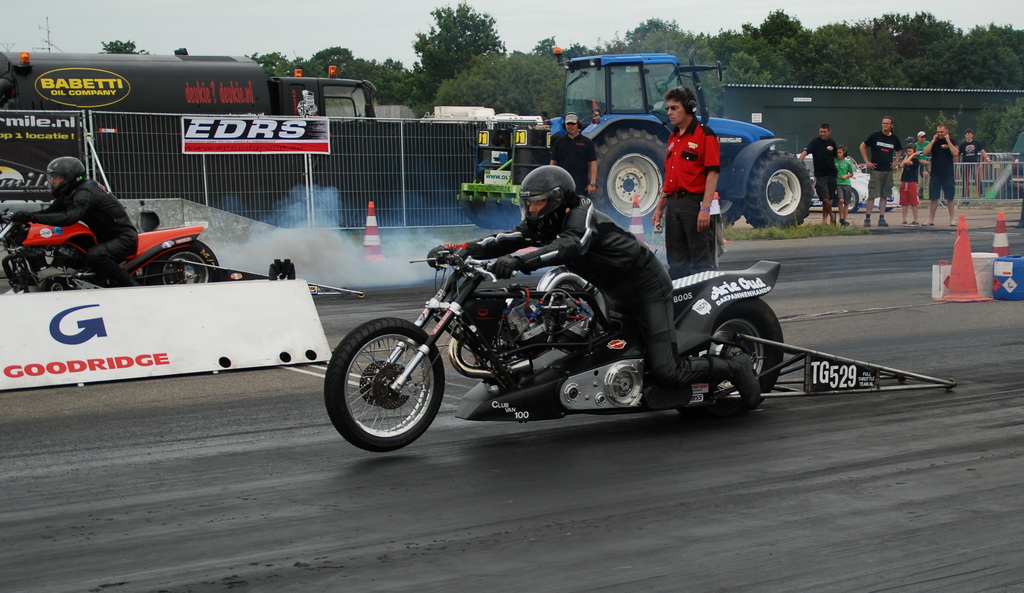 the highest speed of all six riders in the class, and at the end of the weekend, the topspeed earns a bonus of 25 points. Simon Lewis improved a little: 10.19 sec. 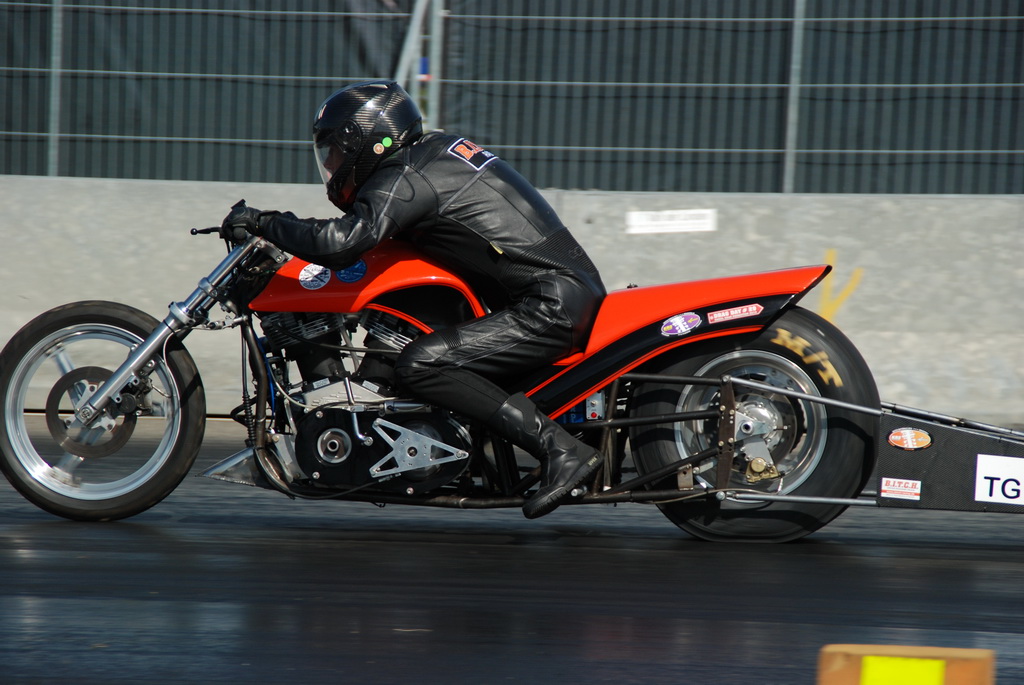 Niklas was still wrenching during round three, and so was van Nimmen. Only Herman Jolink improved, used all six gears of his Ducati and went 8.33 sec @ 247 Kmh.
At the Funnies, Sven "Paddy" Fagan from Denmark set a new personal best of 7.5 sec on the Green Frog Kawasaki, 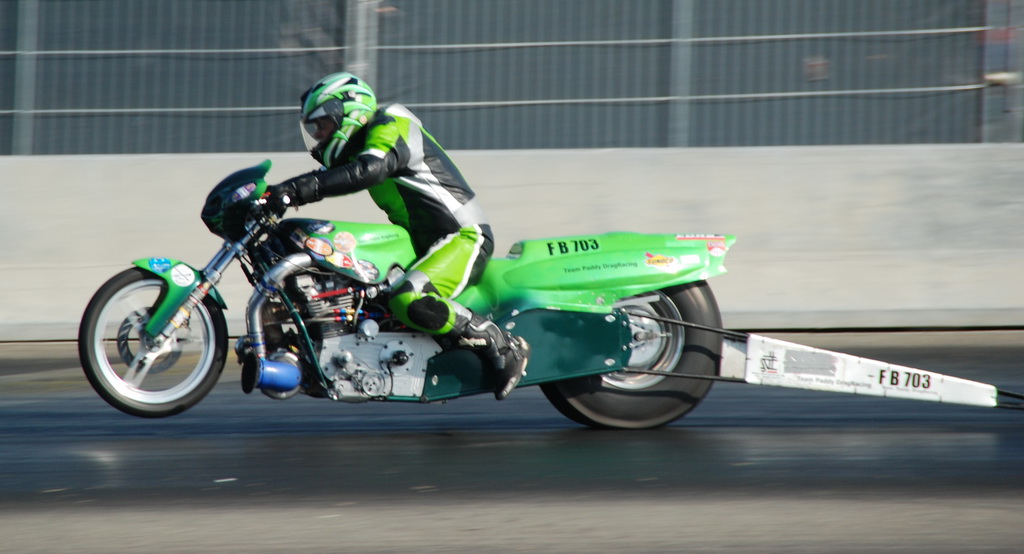 with Martijn de Haas and Viep Bloemen assisting him before the launch.

In the early evening, van Chris Nimmen was in trouble: 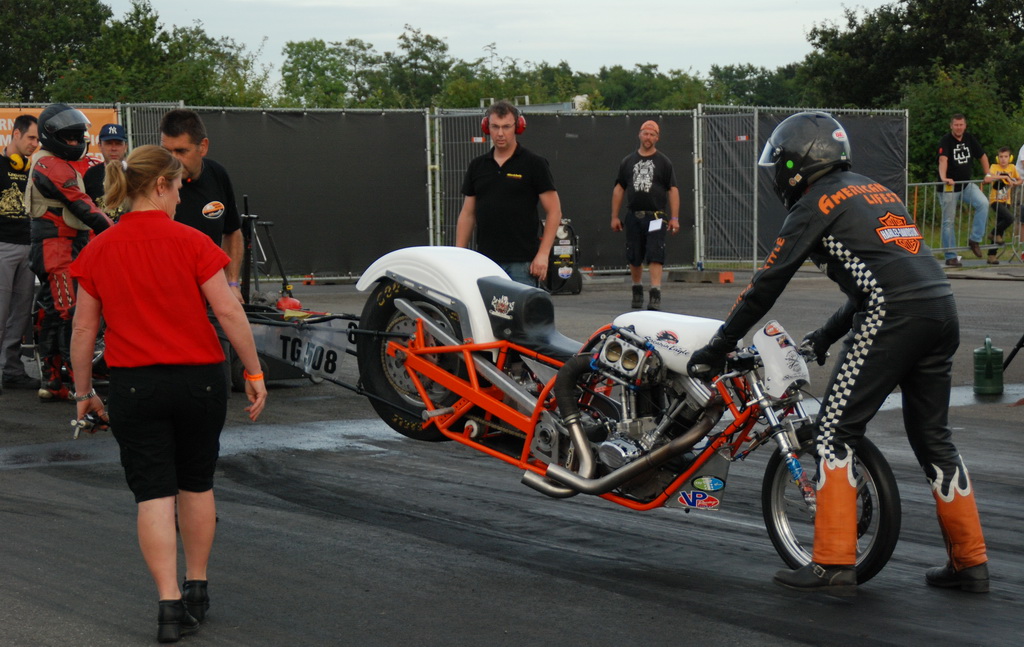 Milan Kolacny set a great new personal best, and went to the top of the list with 8.199. 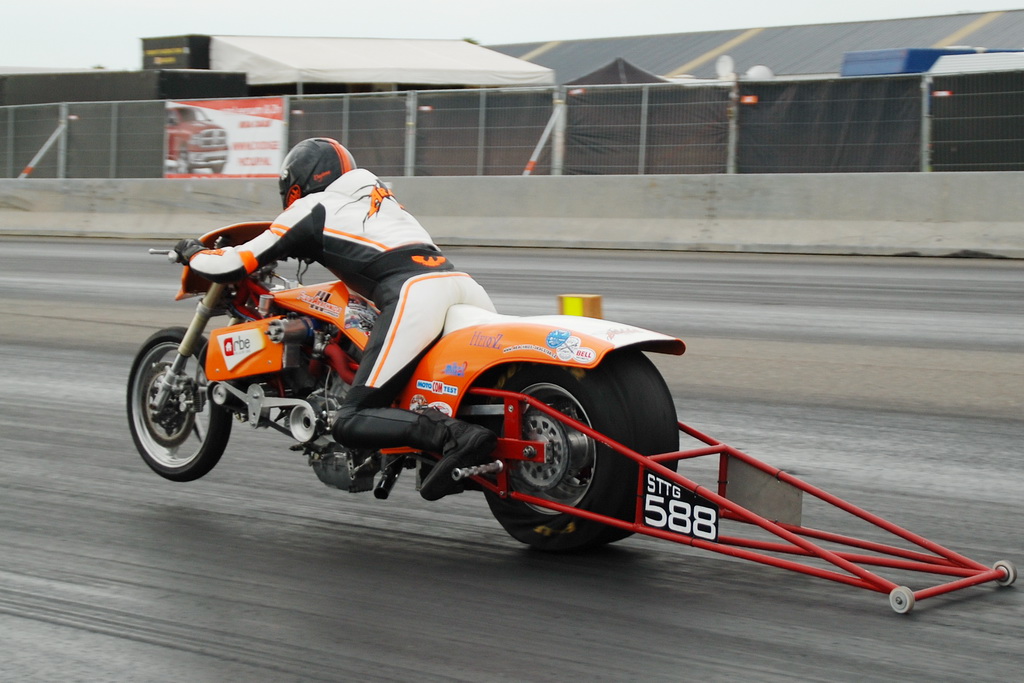 If nobody was able to better that, he would meet the weakest af the opponents on sunday, followed by a lonely ride in the semi finals. Milan and his team were delighted. That night he had a few drinks with Marc van den Boer, and and after getting up late, Milan and his team left the track for a short tourist trip to see the Northsea.

Nitromethane fumes on friday and saturday were supplied by Daniël Kerkhofs on ex-Willem Been's "Wrecker", 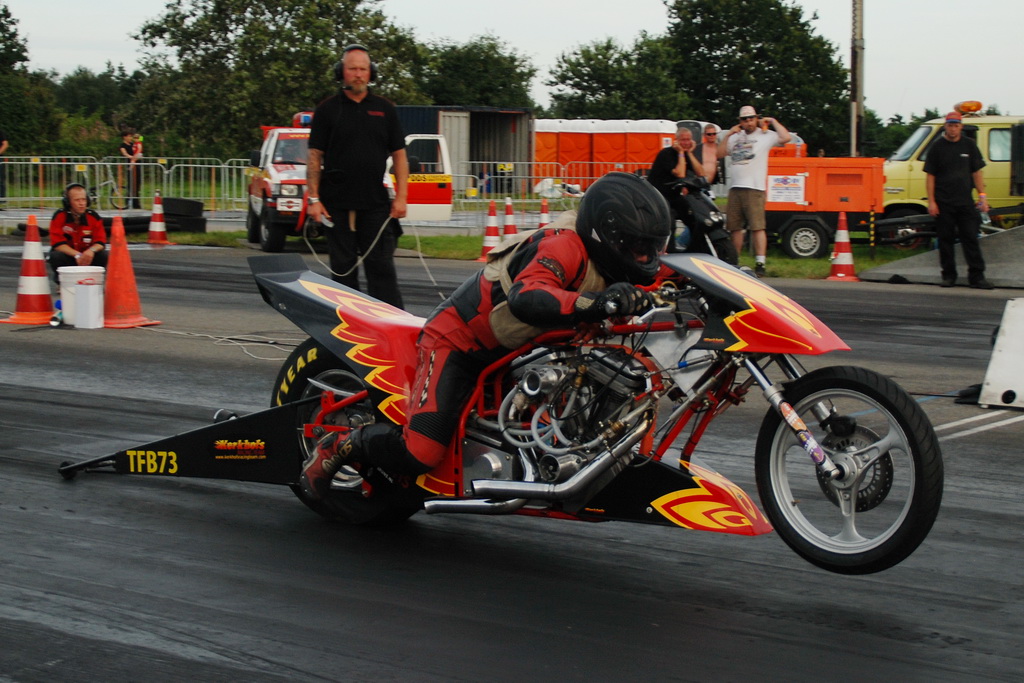 and he never went quicker in Drachten as last weekend, but also damaged his bike on saturday. So he packed went swimming early on sunday Morning. The gap was filled by our former champ Gert-jan Laseur who pleased the crowd and enjoyed himself with a demo run on his Prostock Buell. 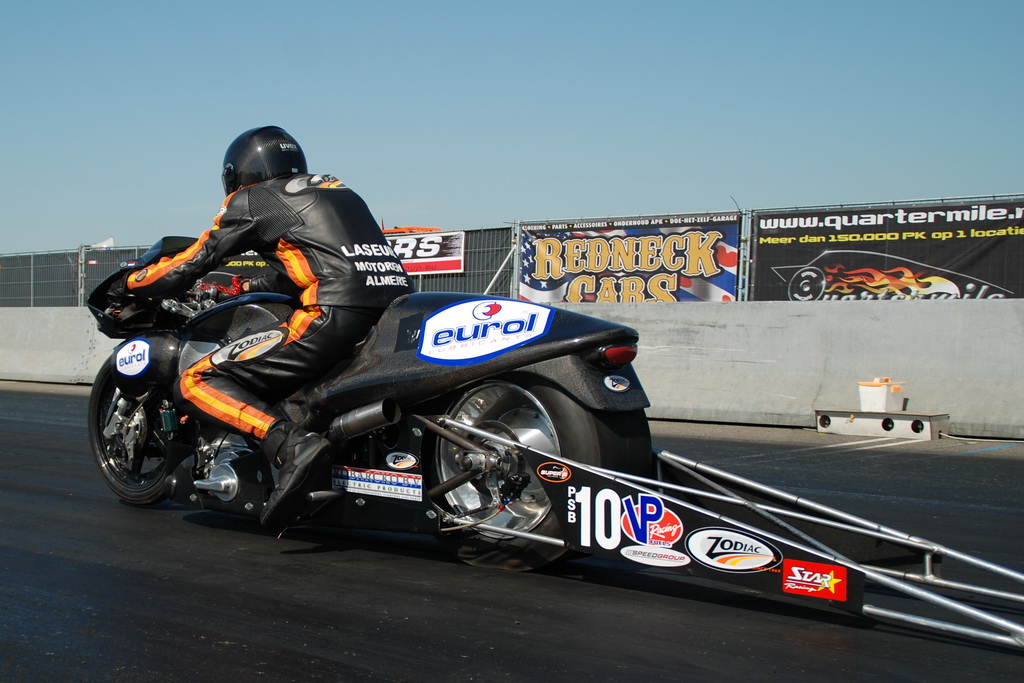 To top it off, Martijn ran the "De Haas Bros" PRP Nitro twin. 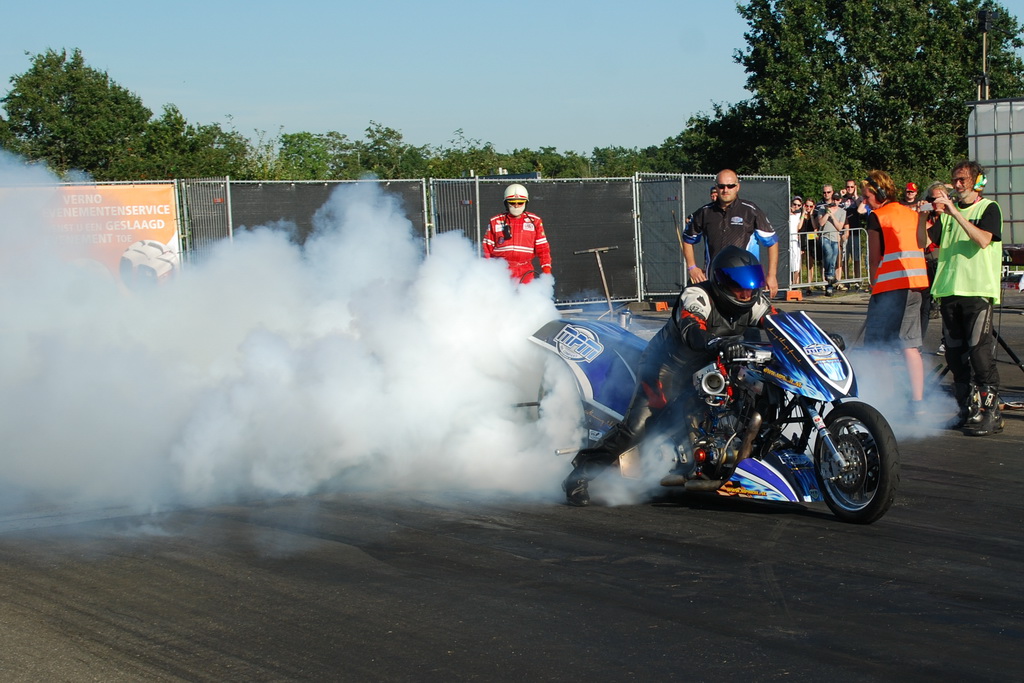 He could not keep it straigt, but was the loudest of all bikes.

Herman Jolink was helped by Petra Duin of team Van Schie an friday at the startline, but on saturday his own mechanic arrived. During the first round that day, at 10:10 AM, Herman left strong, but didn't better his time and the track crew picked up a lot of small aluminium flakes. To blame was the wheelbearing, Herman and Willie put the bike in the van and left the track to repair the damage at the workshop of Startwin in Loenen. Peter Niklas' motor produced a loud bang after the start and the team went back to the pits. 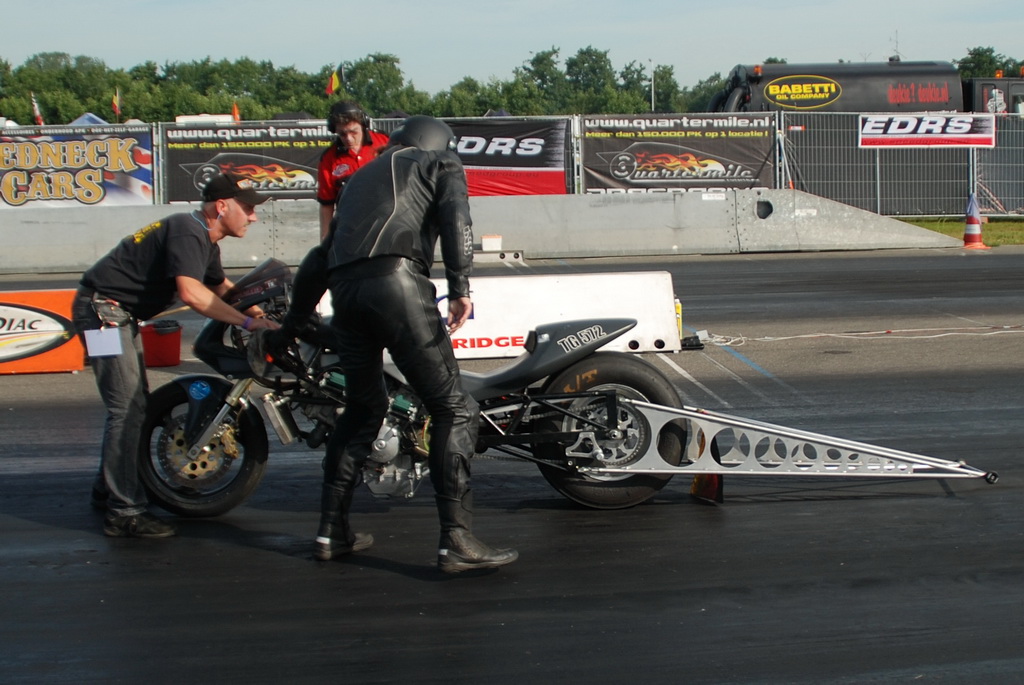 His team mate Christian Bruhn had removed the wheelybar and changed the tyre that he used last weekend in topgas and had been qualifying on his own in the Superstreet Twin class on friday, but now Joerg Lymand and Krause were there to join him and have a battle on sunday. Christian did a new personal best height with this huge wheely, 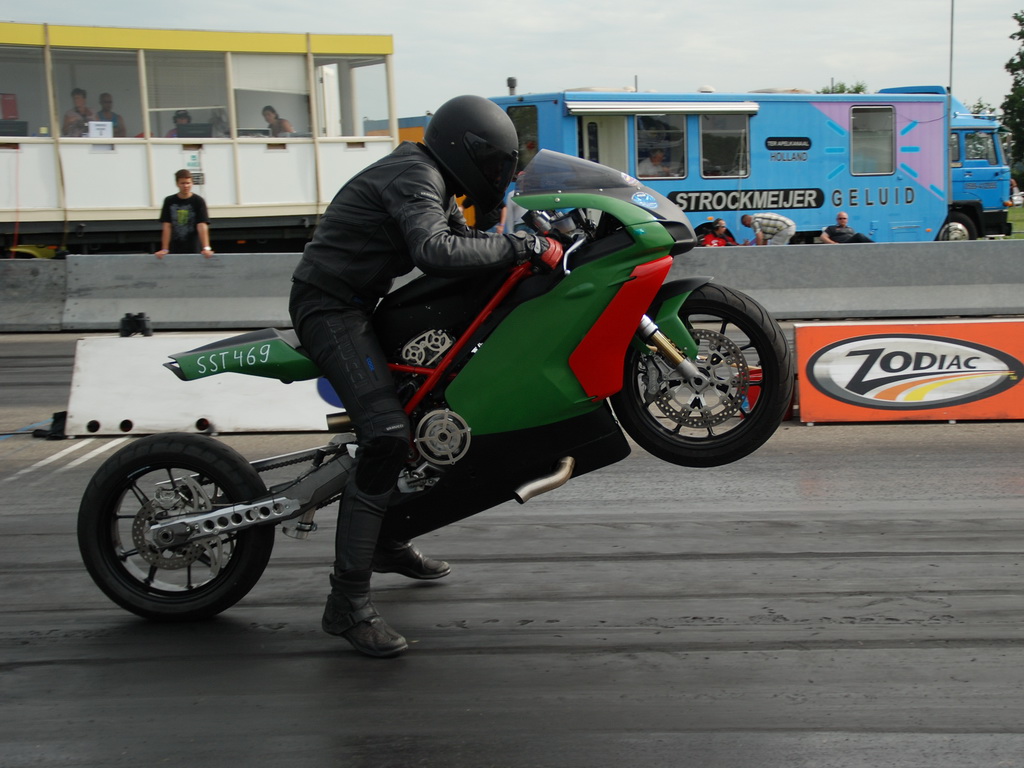 but at the end of day 2 he also got a new personal best time of 9.2 with his Ducati 999 using NOS for the first time.

With Niklas still not ready, only three topgassers showed up after lunch and nobody imprived.

In the afternoon, Simon Lewis improved to 9.77 on the ex- Michael Merse Sportster, but stayed at place #5.
At 18:00 Peter Niklas had more or less repaired, and attemted to make it to the finish line to qualify and make an 8-field possible. 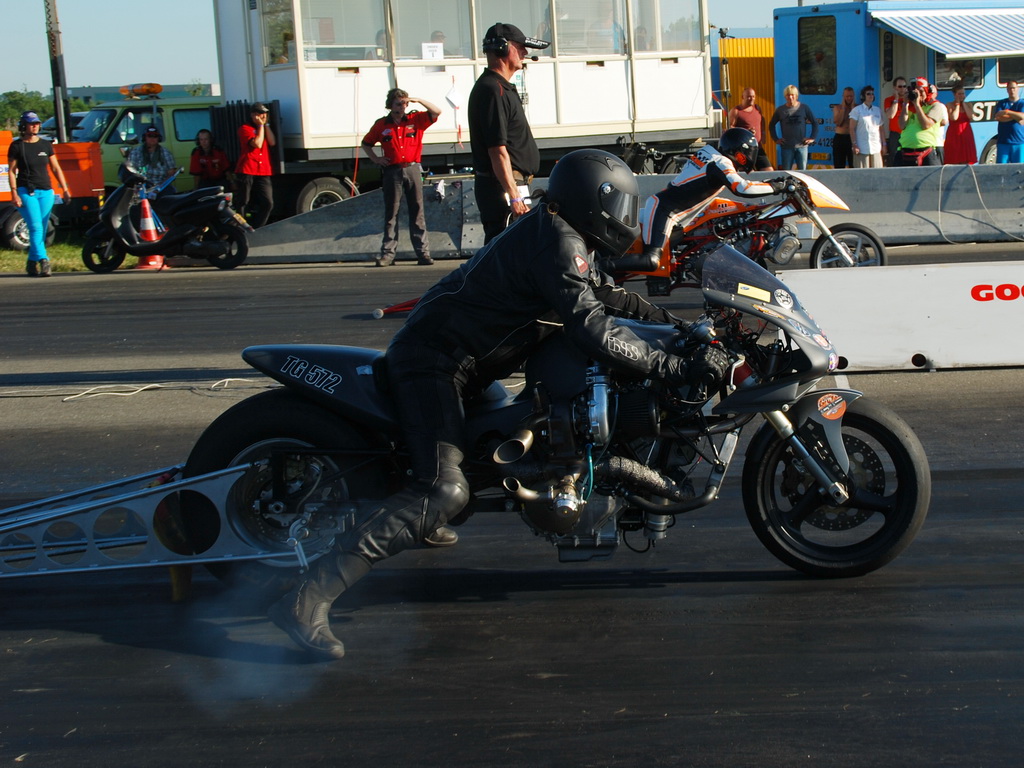 Peter skipped the burnout, and managed to keep the engine alive for about 200 meters, and had enough momentum to make till to the end in 34.516 seconds doing just 23 kmh. Removing a sparkplug later led to the concusion there was no more compression. Milan Kolacny was back from the beach, and made a pass, but had a hard time going straight.

At a quarter past seven the last qualification round, and Herman Jolink was back at the strip, needed at least a new personal best to get on top of the list again, but could not improve. Everybody was given a total of ten chances. The the flowcharts were produced.

On Sunday morning Thom van den Berg showed up a Harry's tent, mechanic Jaap Duin made an appointment to work with him an the cylinder heads the following week at Thom's workshop in Arnhem. It was obvious that Harry's bike was not fresh when he skipped his burnout but in the semi finals. Harry's bike was smoking heavily and had quit, soon after the start in the quarter finals, but Harry advanced because van Nimmen had redlighted. Harry's opponent Jolink hadn't notice all this, his Ducati screemed loudly with a smoking tyre then he rolled towards the startline, and blasted down the track (8.40). 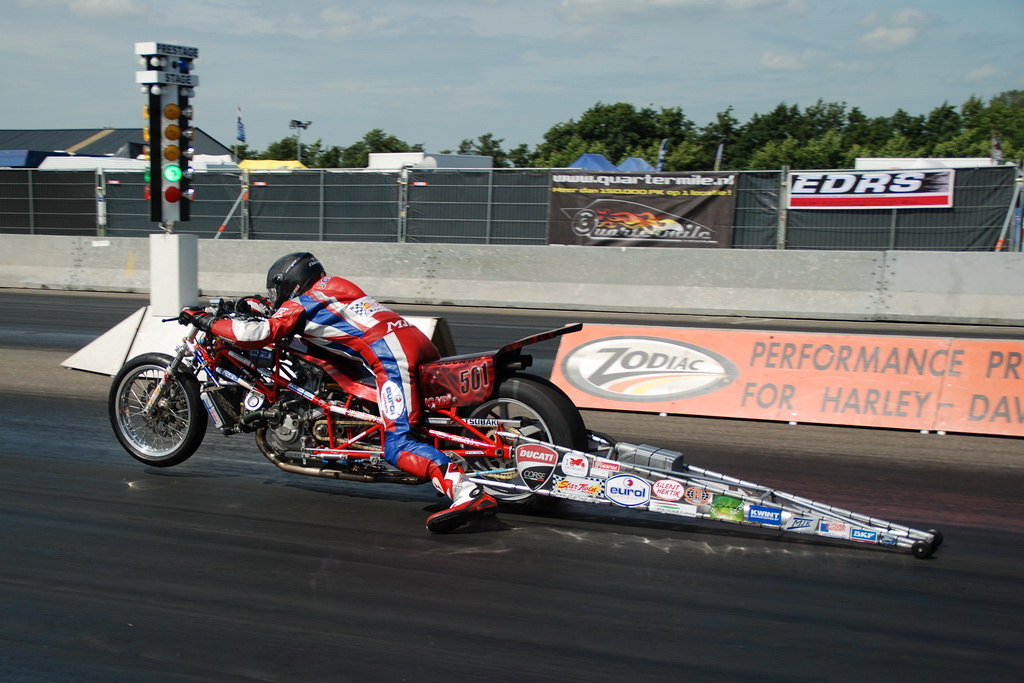 Watch the semi finals below.

Christian Bruhn was too strong forJoerg Lymand after a bye-run in the semis of SST.

So Christian was on the podium twice within one week in two different classes. 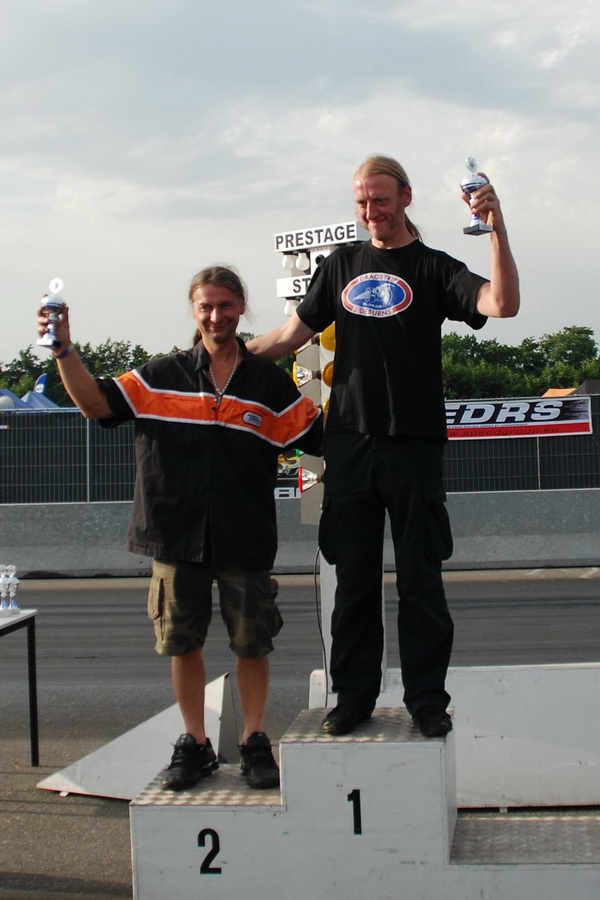 With a wheelybar, narrow slick and NOS, he's allowed to enter the Funny Bike class at Drachten, so he can try his luck there too in october if he wants to. 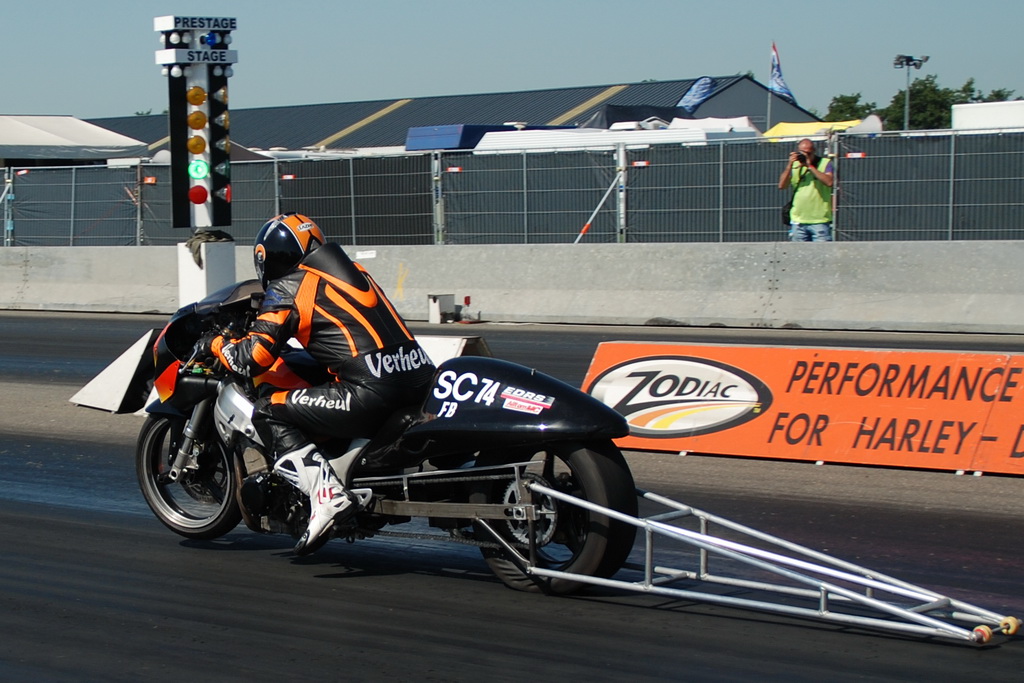 Now it was Eric Jennis with a wheelybar and narrow slick on his 8.5 bike to get into the finals of the Funny bike class and get on the podium with Sven Fagan who produced a string of 7 second runs on sunday, and was slightly emotional when he got the biggest award. 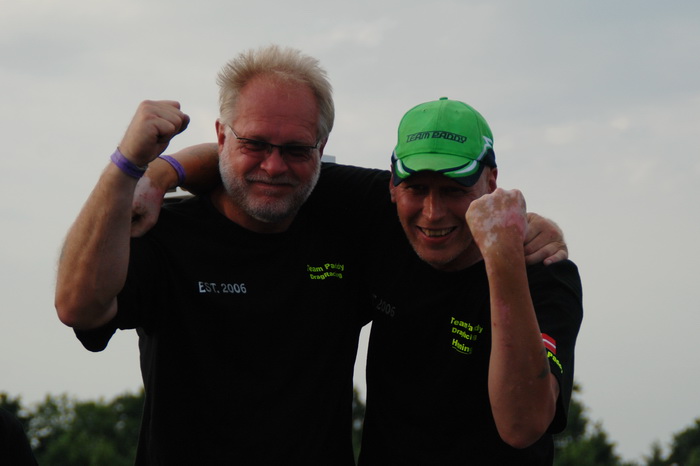 Gust Geens proved once again that he's a dangerous sharp shooting cowbow, and stayed cool in the heat. After taking the win in the Street Outlaw E.T class in Bechyne, he now won the 10.5 Streetbike class doing an 10.509 and had no mercy with Vincent Driehuis in the finals.

I already spotted a potential winner at Drachten 1, but a rain-out prevented Cooper van de Mosselaar to pick up his award. A fierce battle was going on in the Junior Dragbike class, with a 0.002 reaction of Demi van de Belt during the qualifications. 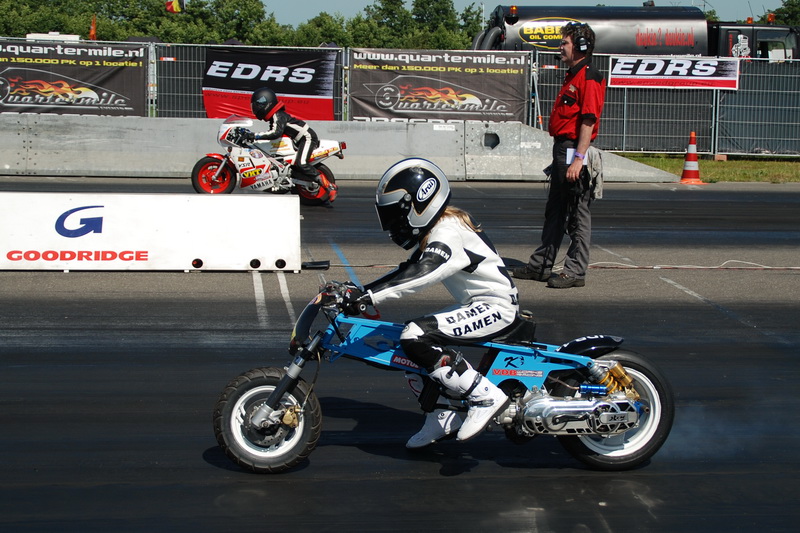 In the SuperStreet bike class , Michael Merse advanced while his opponent Hensley Razoly Eugenia couldn't keep the bike under controle in the semi finals after he started with a wheely.

And the victory went to Charly Anasagasti. 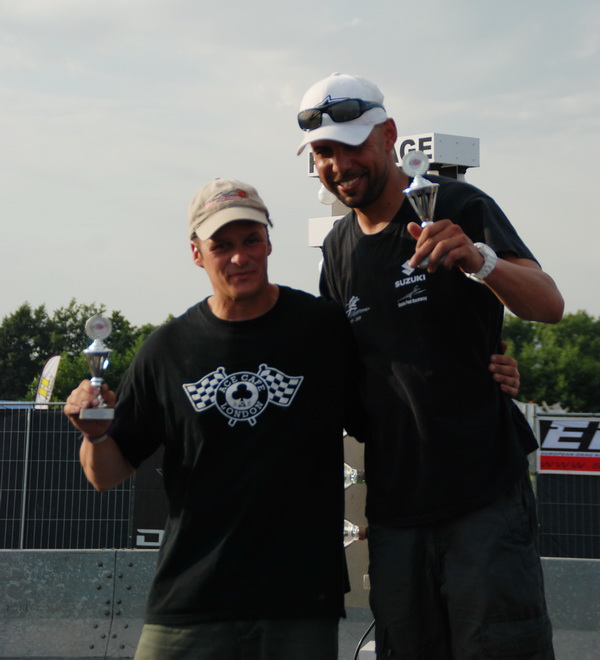 Just like at the Supertwin Topgas race in Bechyne, we saw Jolink vs Kolacny in the finals. This time lane choice for Herman, who picked the left side. Watch the finals below.

Milan went towards the guard rail and Jolink went straight and took the win. A total of 65 point damage for Milan, but he is still in the lead, and went home with a great new PB under his belt. 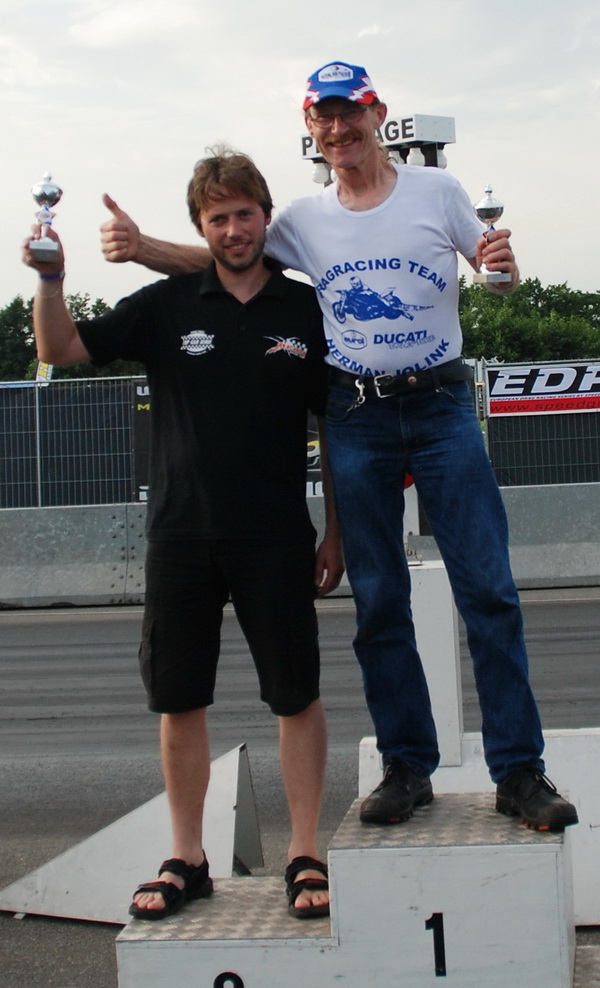 Many thanks to the crew at Drachten, that worked realy hard to make it happen. See you all again in october! 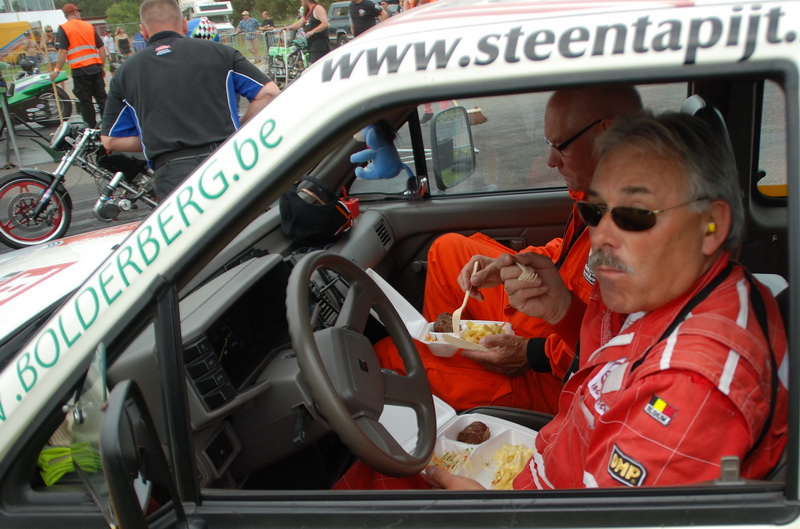