Weather had played an important role in the first half of the season, but somehow Hoskovice usually has good conditions for dragracing on the quarter mile concrete airstrip in South Bohemen. This race was no exception.

For some racers the date of this race, that came in as a replacement race for Drachten 1, was too close to the next one, but Jan Malmberg from Sweden and Miia-Maria Vepsäläinen from Finland used the opportunity to combine the two races, and also have a short holyday in between. It was Jan's first visit to Hoskovice, Miia-Maria had been there once before.

Team Schack had decided to try and pick up all available point, as the competition for the European championship this year is tougher then ever before. And with two races already cancelled, the remainining six will all count. 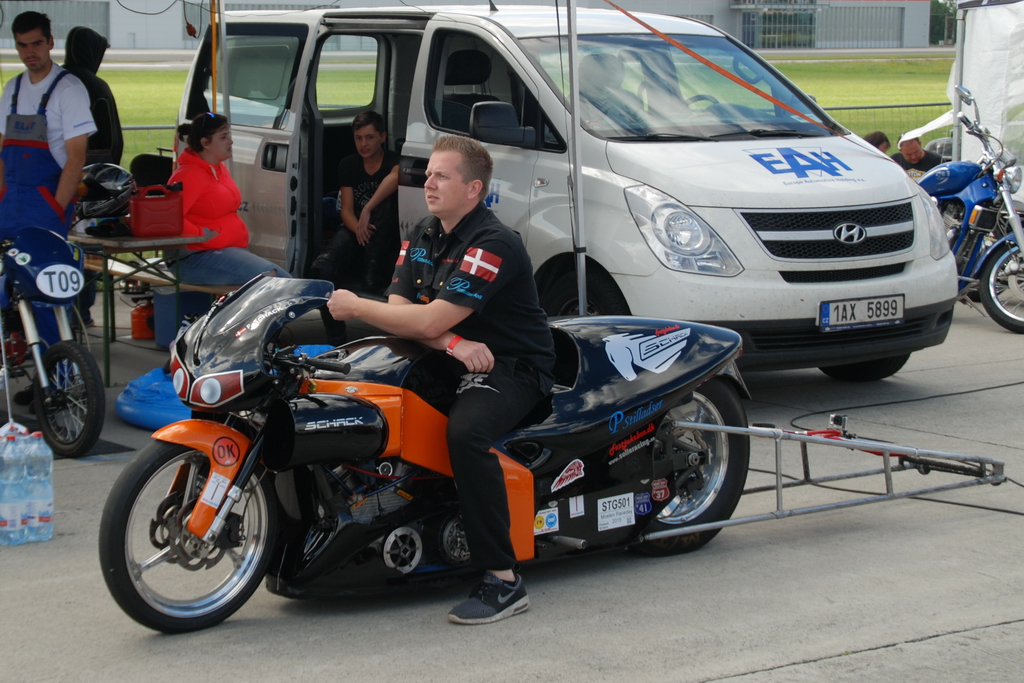 Lars "Birch" Andersen from Copenhagen, Denmark had already voted to go to the Cz dragday at the spring meeting, and enjoys racing in the Czech republic very much. But his buddy Jesse Bohn had family visitors over from far away and could not join him this time. So the next best plan was to take his son, but that also went down the drain, shortly before the race. "But I'll come, no matter what happens" and Birch had brought his wife and was also assisted by Rene Schack at the startline.

Birch came to the track to show his face and say hello on friday evening, then went to relax in a nearby hotel.

Herman Jolink from Holland had not expected he would be racing in the Cz this year, as demo's at the WorldDucatiWeek were on the agenda, and he alway has to skip a race for it. But on his way home he found out that Schack, Miia-Maria and Birch were on the entree list, and did not hesitate one second, but decided to also go.

The participation of Jan Malmberg was uncertain untill the last day, and organiser Yvona Kneblova was relieved after all five topgas teams had showed up on saturday morning. Three round of qualifications were planned, followed by eleminations in the afternoon, so a lot of work for the teams to get the bikes in shape between the rounds.

And for Jan Malmberg who arrived alone, Jan was assisted at the startline by Jörg Braune, who was competing in the Modified Streettwin class on his Sportster.

Herman Jolink had already made a rest pass on friday afternoon, and knows the track and the possibilities of his bike there very well. He shot off with a nice 8.56 @ 244 Kmh. Frederik Schack was troubled by sidewind and used all his riding skill to keep it as straight as possible. 8.11 @ 238 kmh put him on top of the list. Malmberg left strong with 1.25 60-foot but went towards the centerline and had to shut it off to avoid hitting the timing reflector blocks at the 1/8 mile mark.

Lars Birch's bike was leaking oil after his burnout, so he went back to the pits. At first he thought he had put too much oil in it, but soon discovered a large crack near a weld in the aluminium oiltank. And he was able to stop it from leaking it with Herman Jolink's magic sealant.

Still some small problems for Miia-Maria in the early morning, but during round two she made a great burnout and did 9.7, quicker the she ever did in an official topgas race. 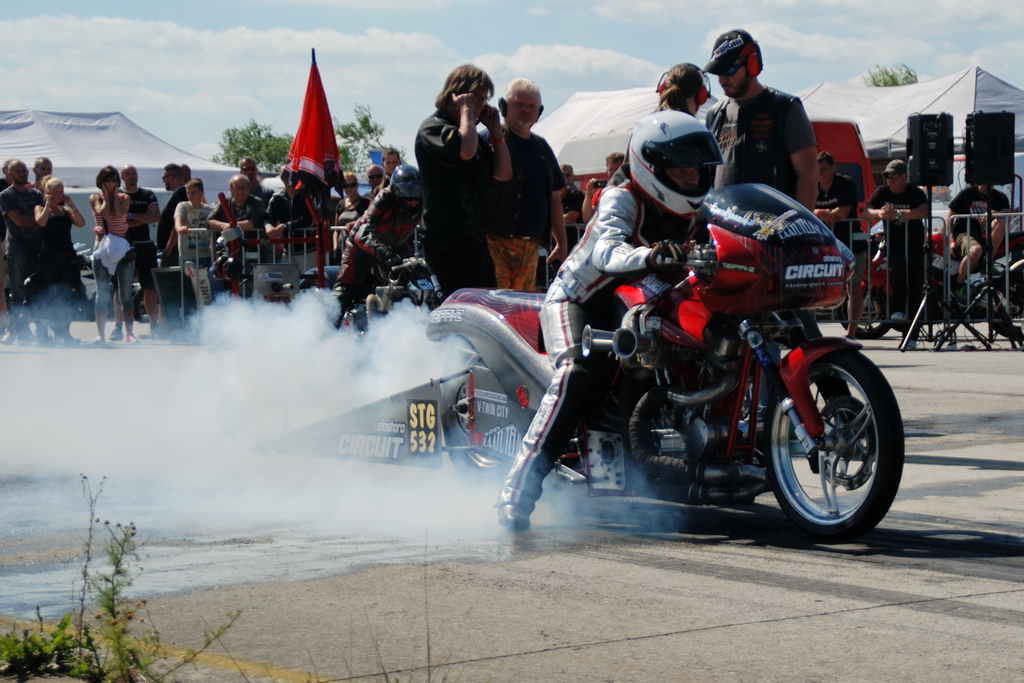 Malmberg came close to his personal best in round two, with again a 1.25 60-foot. Schack did 7.8 but both rider had a relatively low end speed.

Jolink almost copied his previous run, now using the other lane. Lars Birch's gas cap came off during the burnout, so again no time for him. 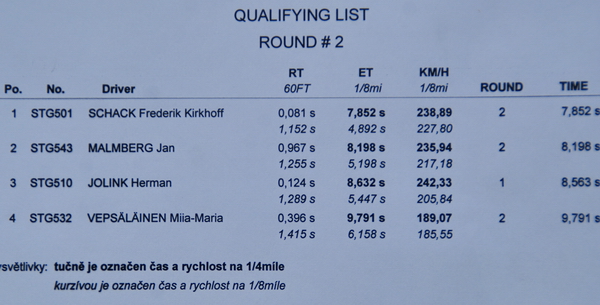 Jan Malmberg did a new personal best and went "into the seven's" in round three with a far from perfect run.

Problems with the fuel pump for Miia-Maria, so no improvement, But Birch managed to qualify, so just enough riders to also have quarter final rounds.

A quick lunch and the riders presentation, then the battle started.

Schack got to ride alone, so no problem, but his bike lost power before the finish line.

Birch had a bad start and problems with the air shifter, while Jolink produced another 8.5

Then another personal best for Jan Malmberg, 7.890 seconds... 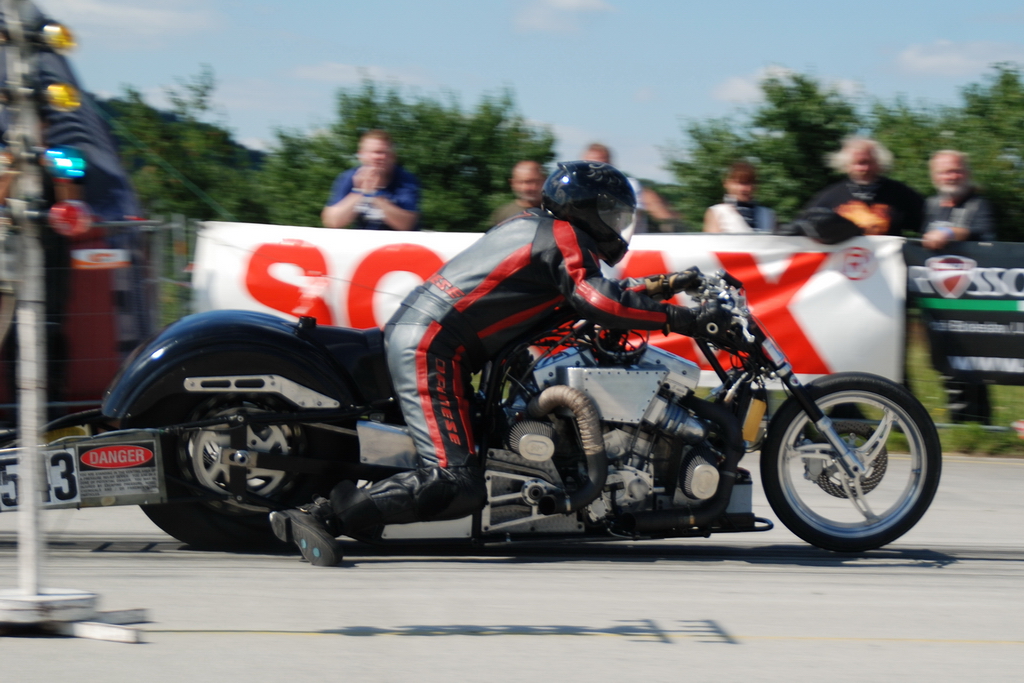 ...while Miia-Maria was unable to give competition because of a small electrical problem.

Team Schack discovered that a manifold had come loose because of a cracked weld. An emergency repair was attemped, (involving duct tape and ty wraps) and they almost missed the call for the semi's, but they got there just in time.

But it didn't work out the way they had hoped, The bike reacted lazy at the startline and Frederik had to give up. Another 8.5 for Herman Jolink.

Jan Malmberg and Jorg Braune had a hard time starting the bike, but the scrutineer gave it his "magic touch" and monster came to life.

Jan got to ride alone in the semi finals and did 7.9. Three "seven's in row", a fantastic job! Finally the double blown bike is showing it's potential. But the bike lost power just before the startline, and Jan did not know what caused it, before he got the call for the finals.

Unfortunately Malmberg was not able to do more then make a burnout, and fears he "holed a piston".

Jolink saved his best for last, like he always does, no matter if he has an opponent or not. 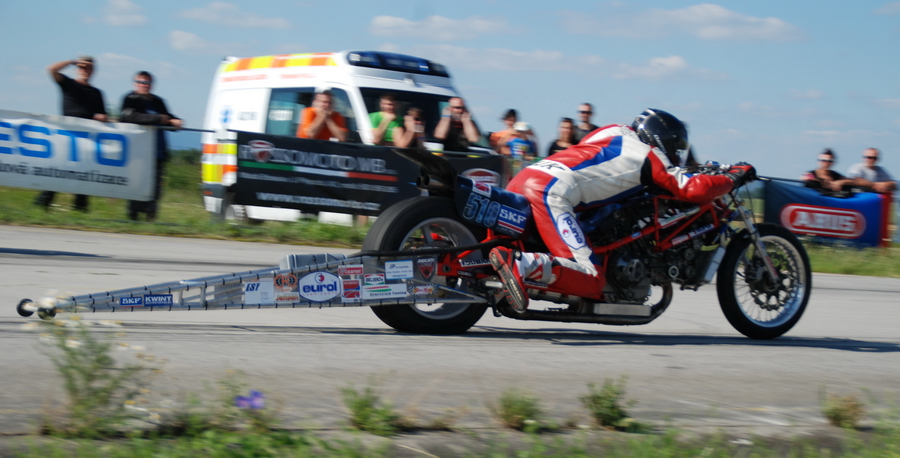 Jolink ran his best time in the finals, 8.4 seconds, and his homemade Ducati was the only topgas bike without any mechanical problems during the 41st Czech Drag Day. Well done Herman!

Frederick Schack still strongly in the lead after his third place at Hoskovice, but the chase for Birch's #2 spot is on. There are many fast guys on the entree list and many points at stake at the next race. 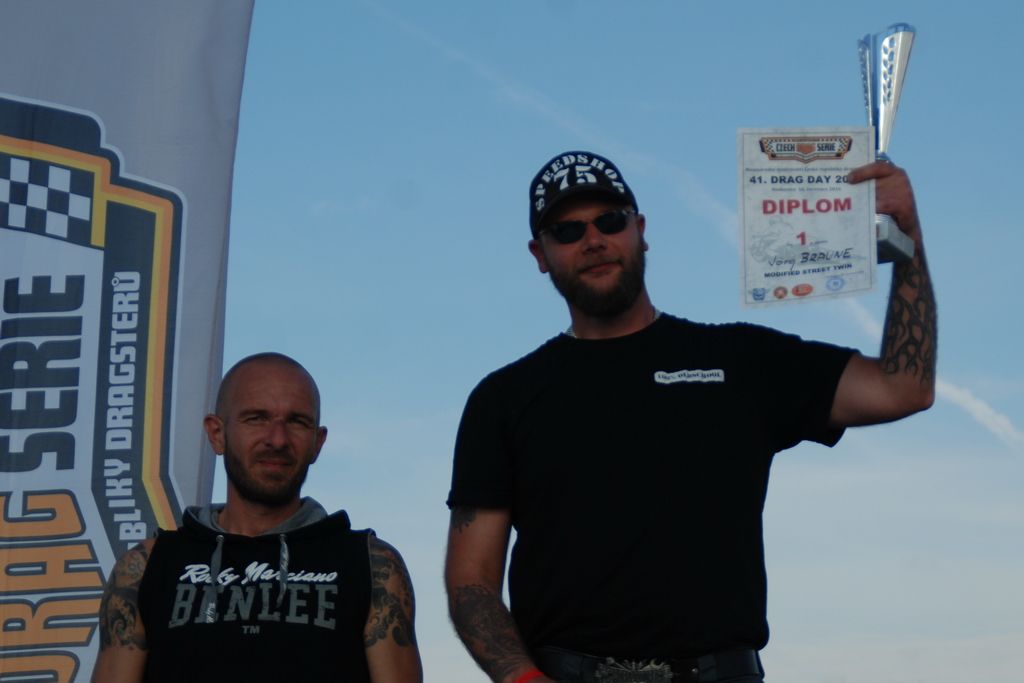 Sixteen year old Andrea Binova competed in the "National" class on a Ducati 750 dragbike built for her by Otto Knebl. Next year she'll be old enough to enter the topgas class. 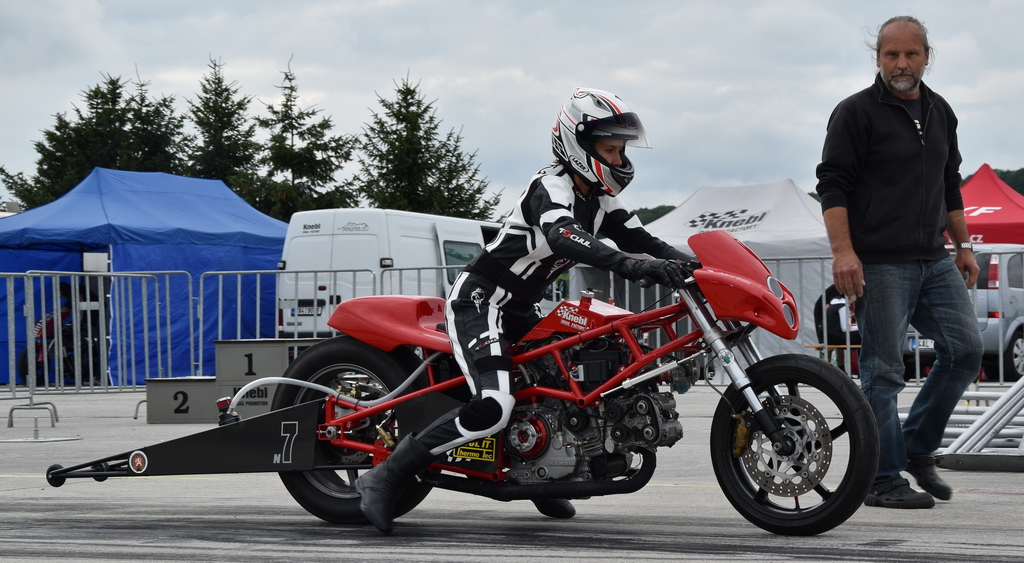 Many thanks to Yvona, Mr Hutla and the rest of the crew for hosting a topgas championship's race every year since 2003!

Last time I saw Jan Malmberg was on sunday morning at the track. He had some time to kill before his wife would land in Prague, and was determined to find out more about the damage and what caused it... 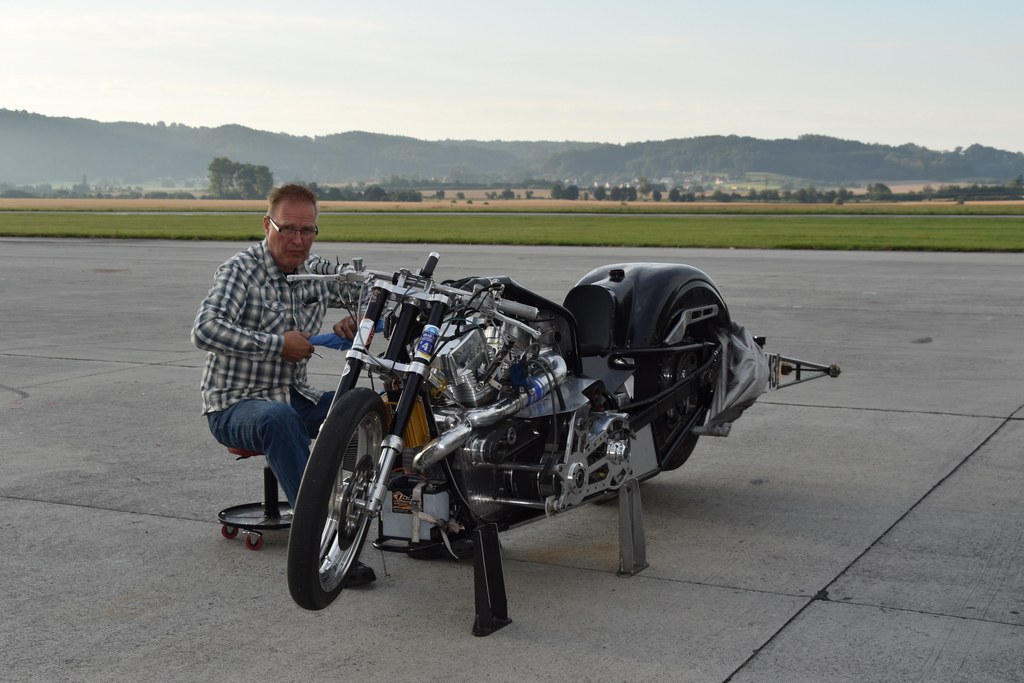 Just a few more days then Drachten. And the weather is fine, this time! Miia-Maria Vepsäläinen is confident her team will solve the minor problems, and is looking forward to a lot more track time. Will Jan Malmberg also be able to repair it in time? There's only one way to find out. See you all there!