The first burn out was done by Harry van Schie, but not on his drag bike. 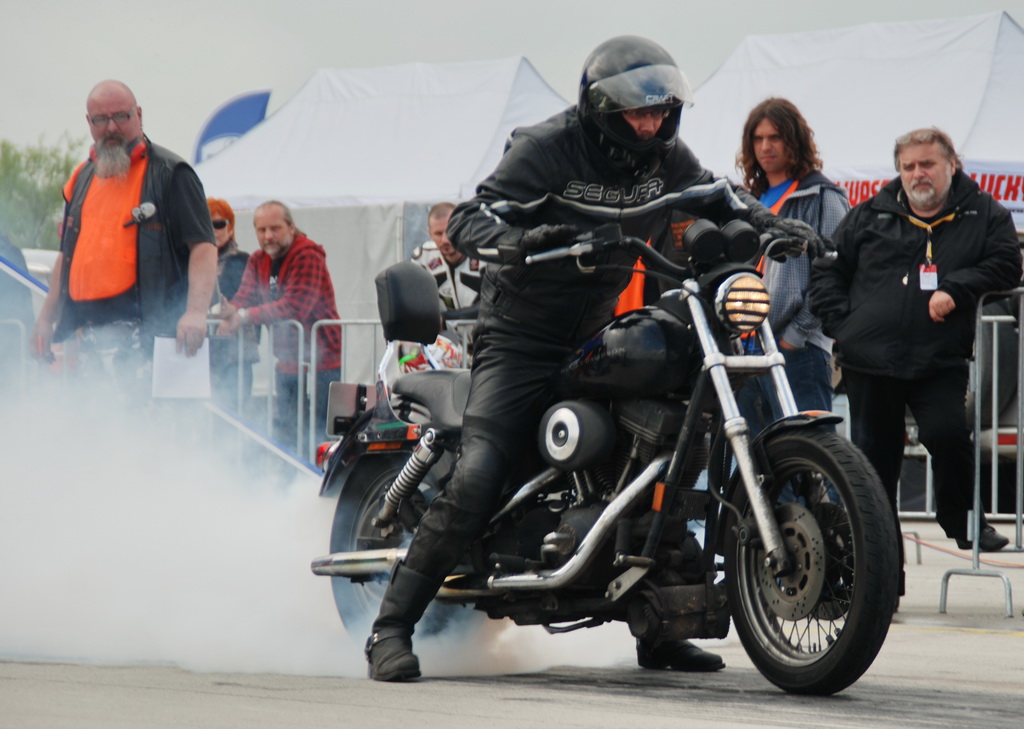 His mechanic jaap was on holiday in spain, so Harry joined the "Harley Cup" class and his son Gijs was racing in the "Teenage Dragster" class. 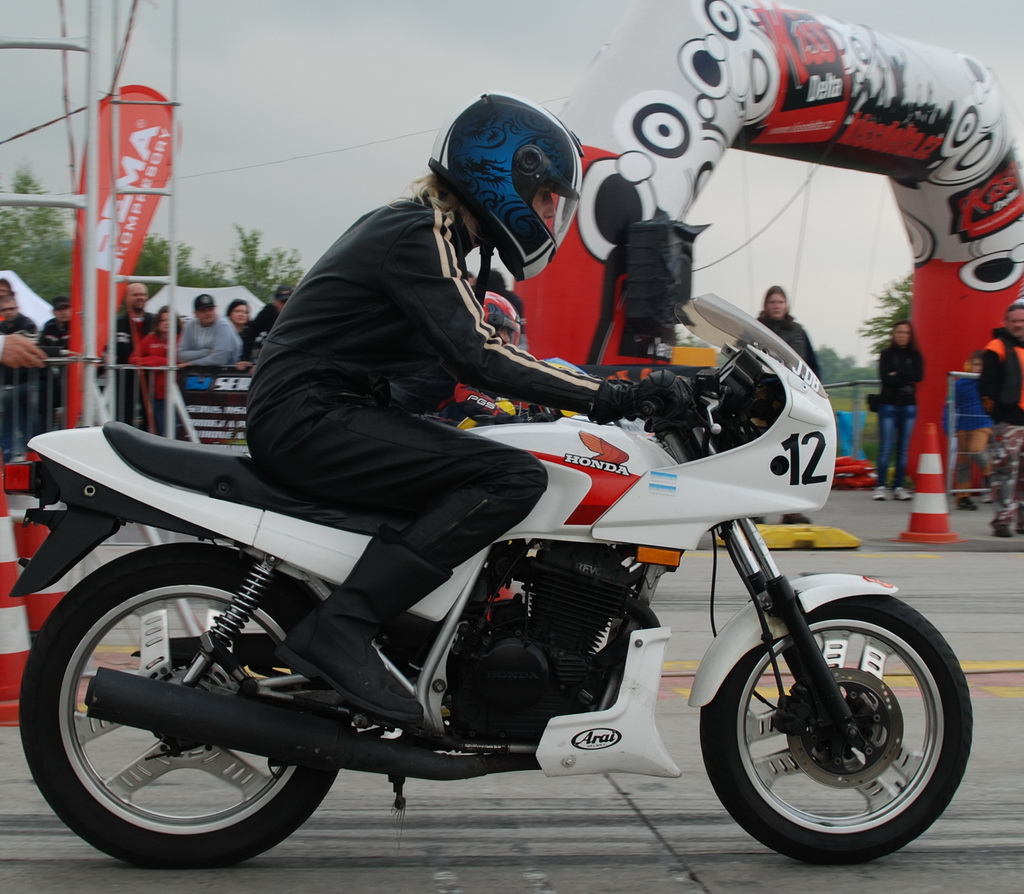 Herman Jolink arrived early on friday morning and made a check out pass on his Ducati late in the afternoon, as the track was open for free practice. 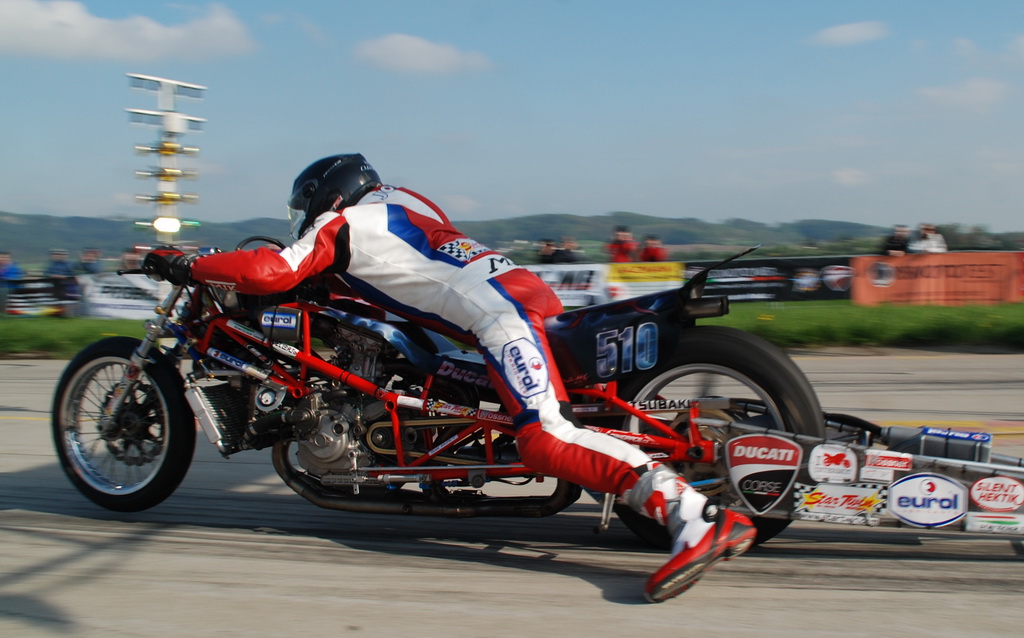 He was watched by Fredrik Schack, the new member of the class. Fredrik rides a S&S Harley previously owned by Ulf Ögge. 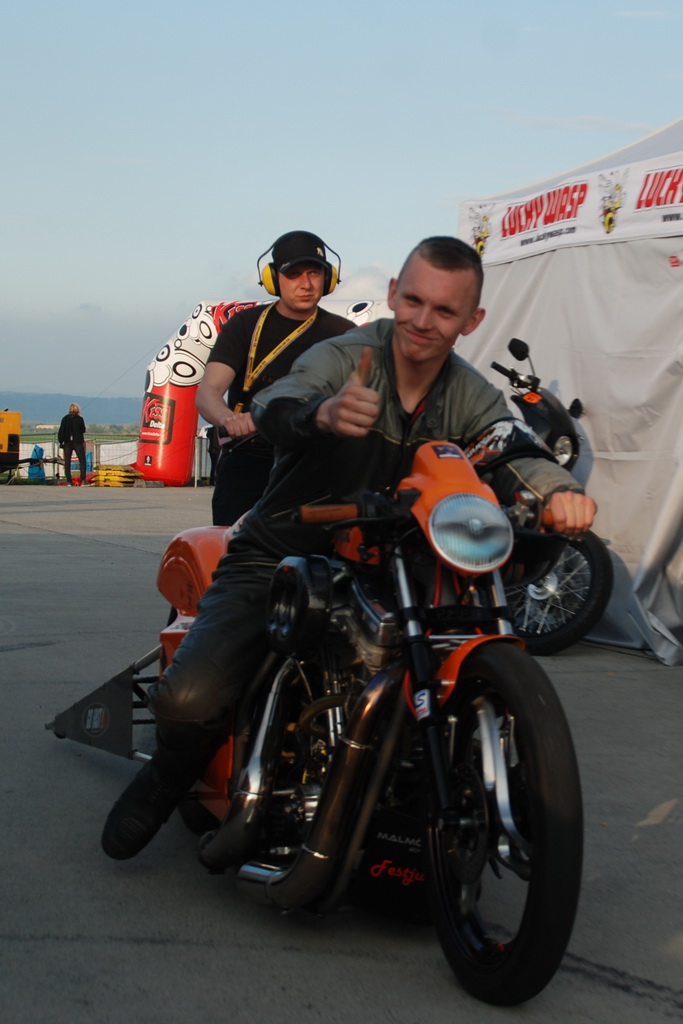 He had already been practicing in Malmö, with good results, but did not do a full quarter mile pass on this bike yet. 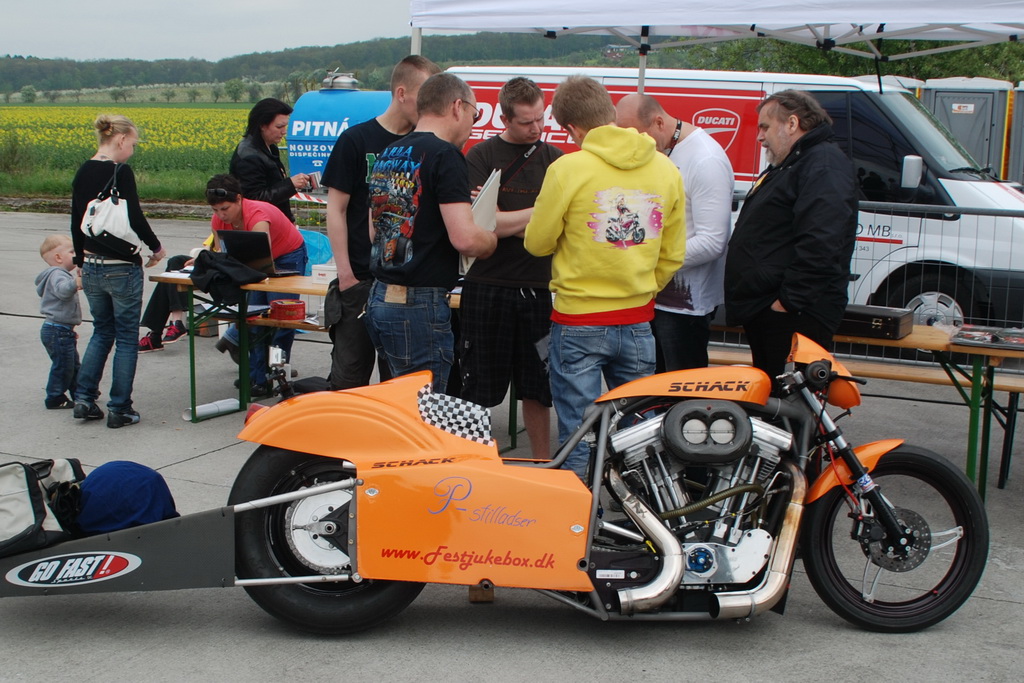 The technical scrutineer found that Fredrik's helmet was too old, so a fresh one was bought in a store nearby, and it matches the bike very well.

After an absence of two years, Frank Heitmann also showed up race ready, and highly motivated. 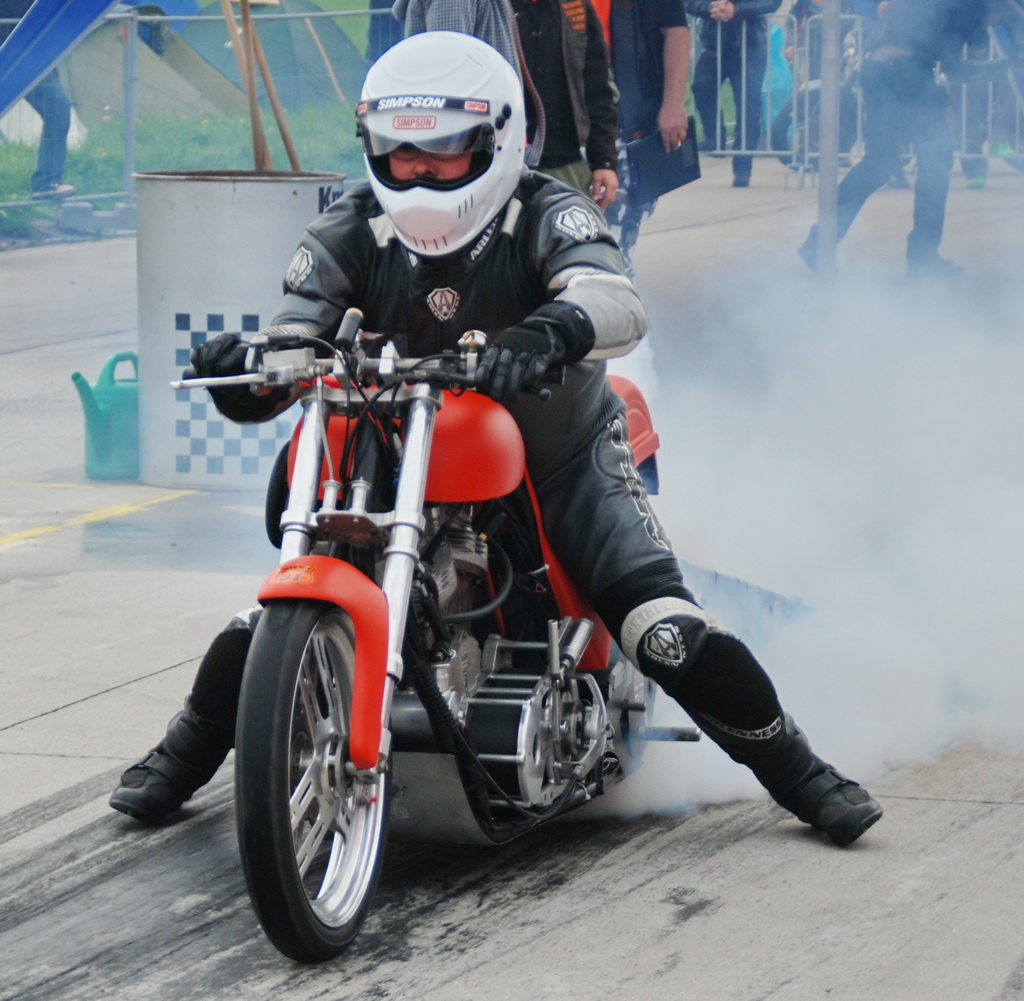 His son also raced in teenage dragster, for the first time in his life, made second place and got his diploma. 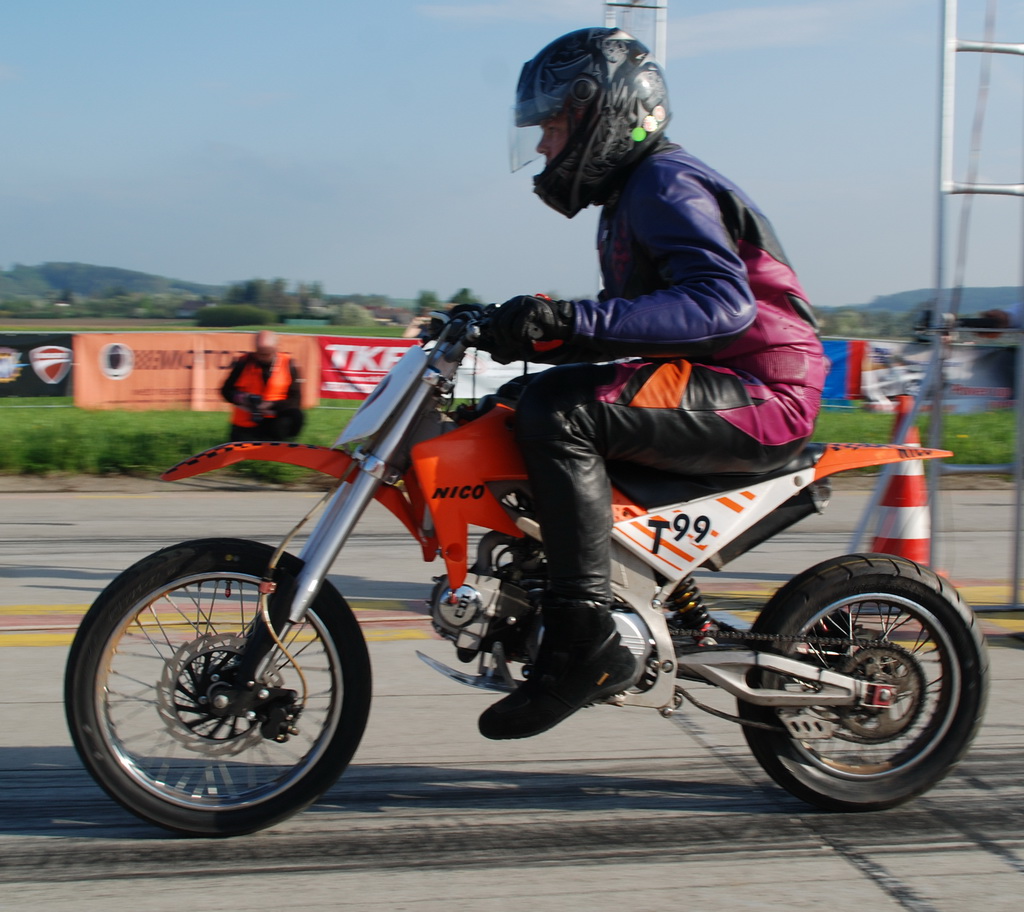 Team Sideburns was the last topgas team to arrive at the airfield east of Prague. They had recently fitted some fresh parts and electronics on the Honda, and Peter Niklas got it through technical inspection, but they did not get it to run well and didn't take it into the line up. 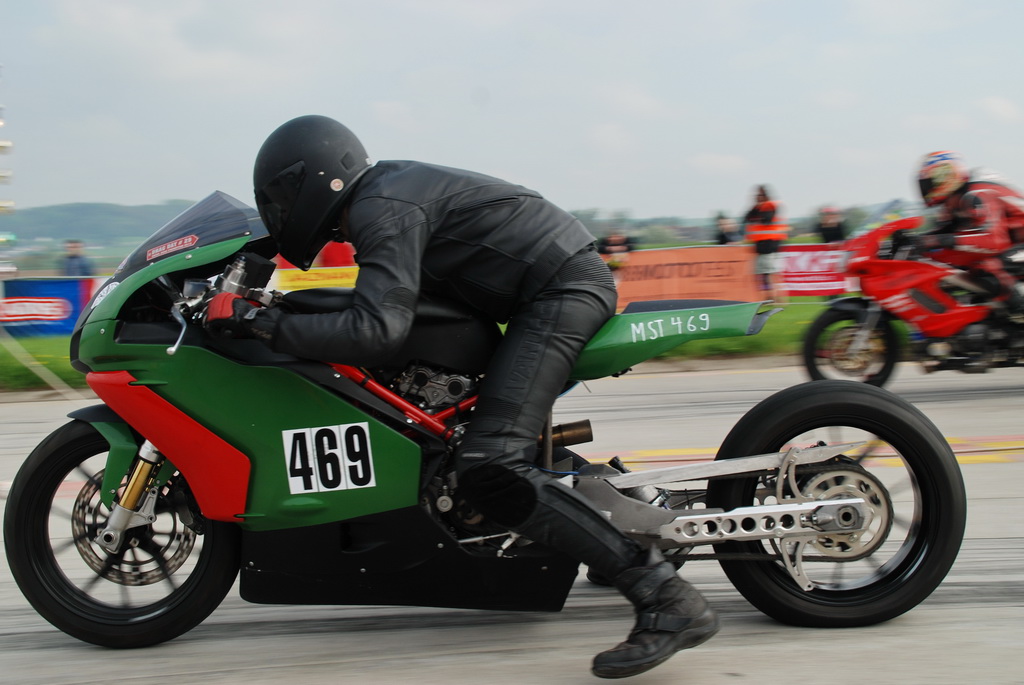 Peter's team mate Christian Bruhn (a.k.a. Christian Brown as the speaker called him) had already won a race on his Ducati, earlier this year, in Mosten Denmark, and dominated the Modified Street Twin class in Hoskovice. 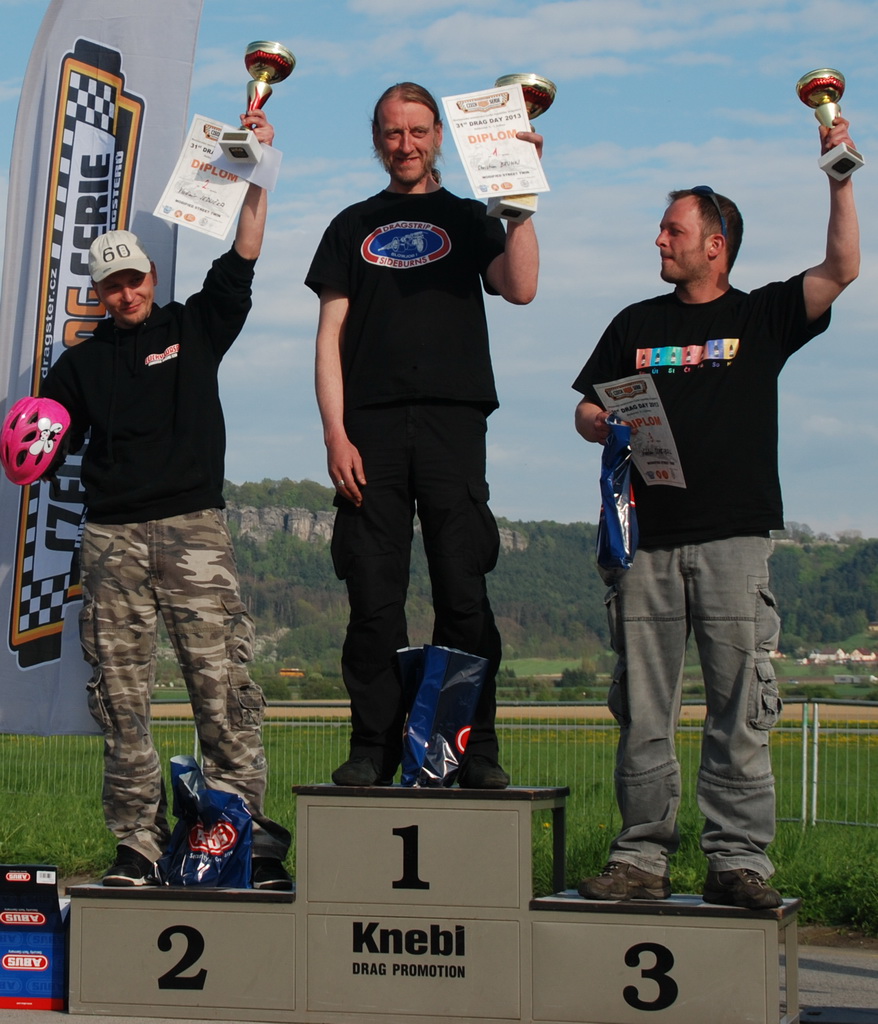 The street bikes were first in line on saturday for a few rounds, before the fast guys could ride on the concrete track. A little shower stopped the fun for a while, but it dried up quickly, so everybody got enough chances to qualify on saturday, and two more rounds were held on sunday morning.

In the Superstreet Bike class team Nightrider was at full strength. 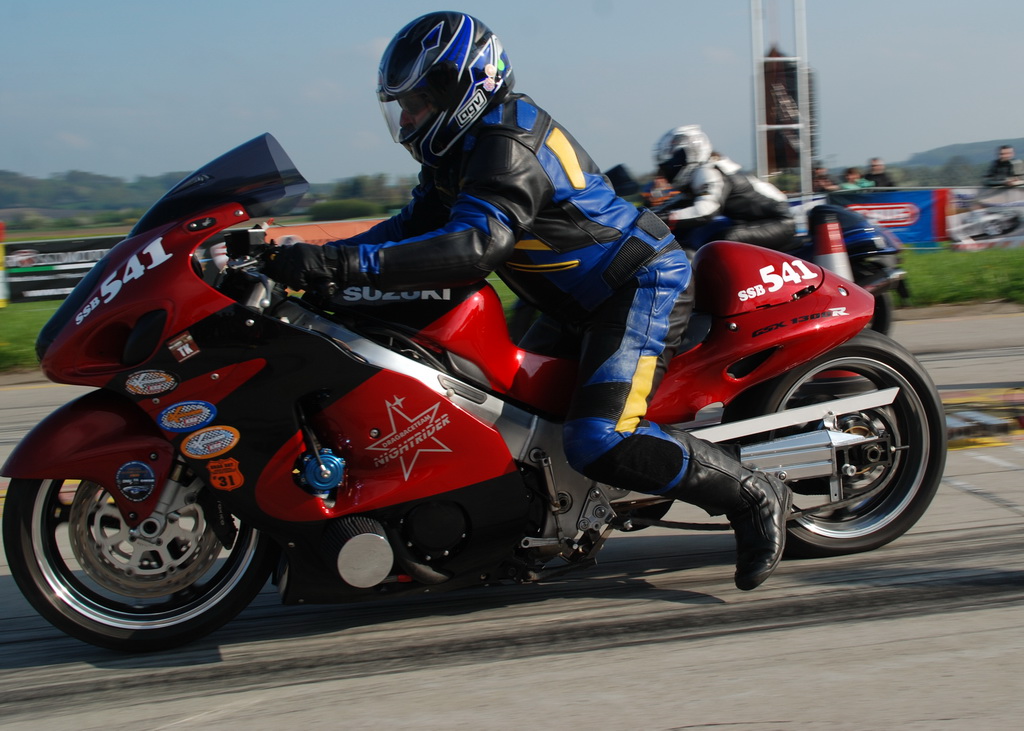 It had taken Horst Hochheusel two years to repair his bike, but now he was ready to join Michael Merse and Michael Kaupat. At least he thought he was, but things didn't sound well during his test on friday afternoon. So he searched through the electronics, and on saturday morning he found the dodgy part, and replaced it in time. He was the quickest of his team on saturday, and only young Tomas Cizec went quicker that day. 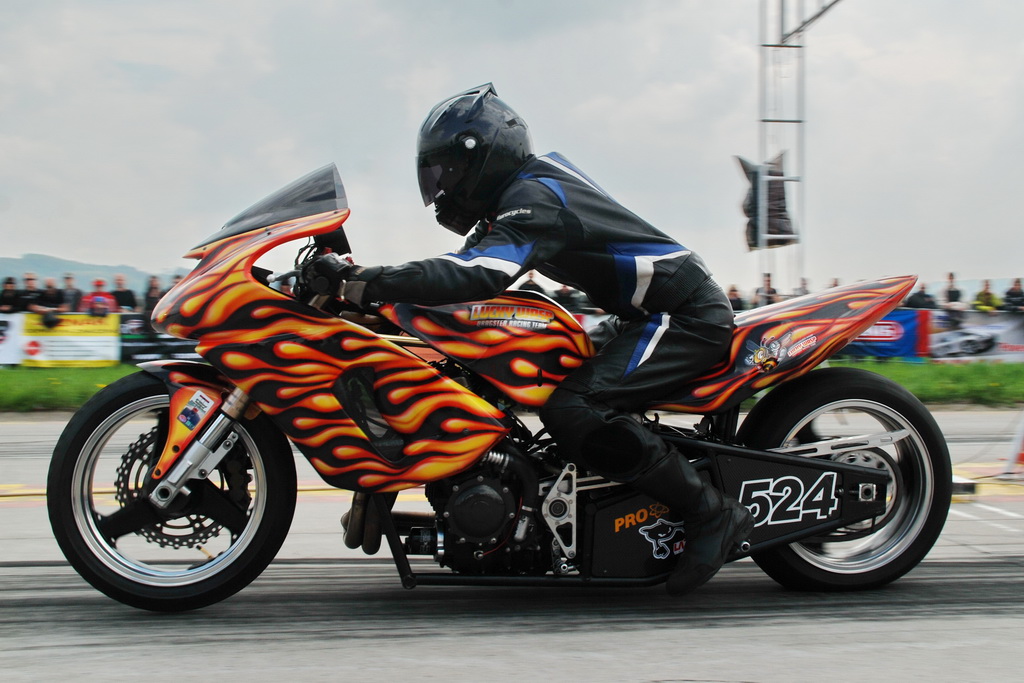 On sunday Kaupat was the strongest man of the team, and made it into the finals where he even had lane choice. 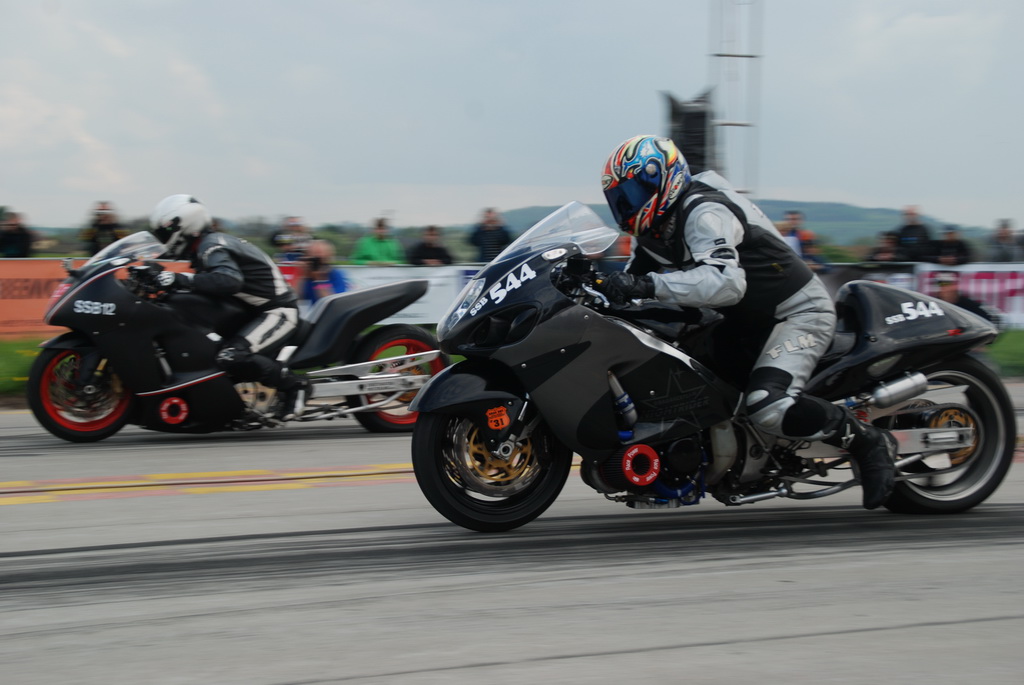 But a big surprise, he got beaten by Sandro Haldimann (right lane). 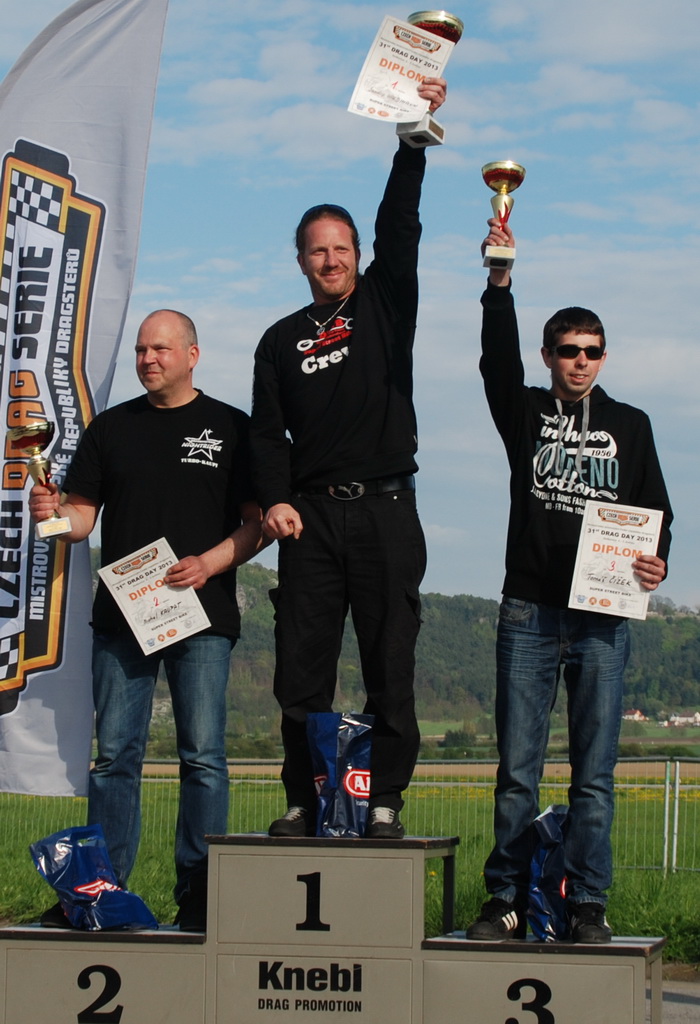 Sven Fagan and Marc van den Boer were on the entree list for Competition Bikes, but both riders were not ready prepairing their bikes, but Luc Raymaakers and Stefan Hagenstein gave the class it's international accent. Haggie had problems setting up his clutch, Luc had no problems, 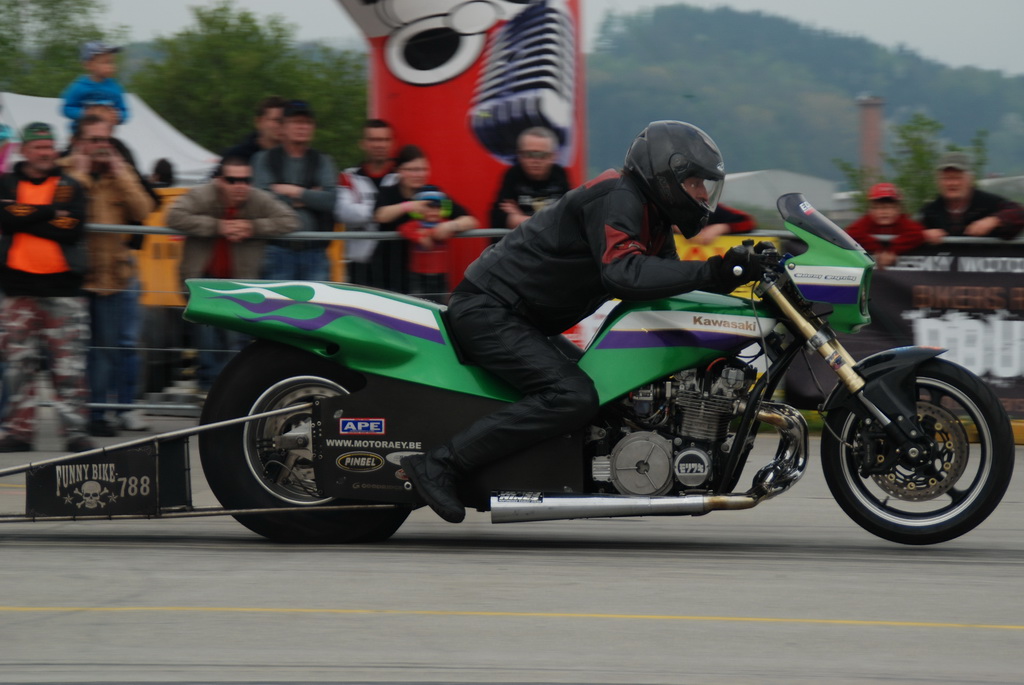 ...and beat Jozef Cizec in the finals, with his Kawa Funny bike. 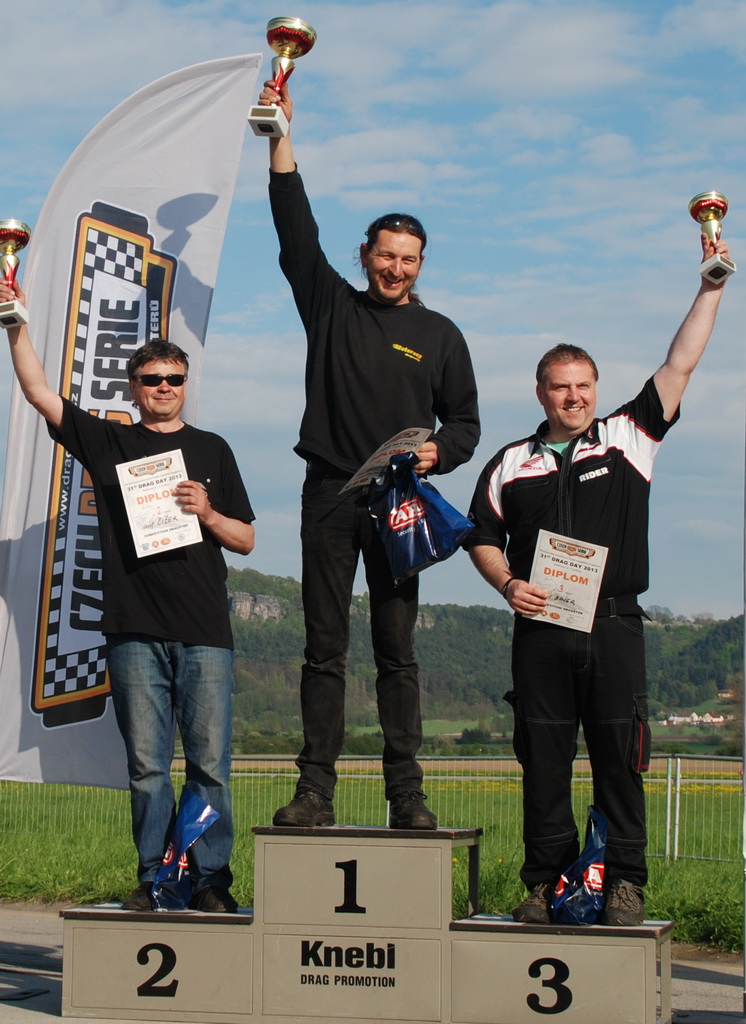 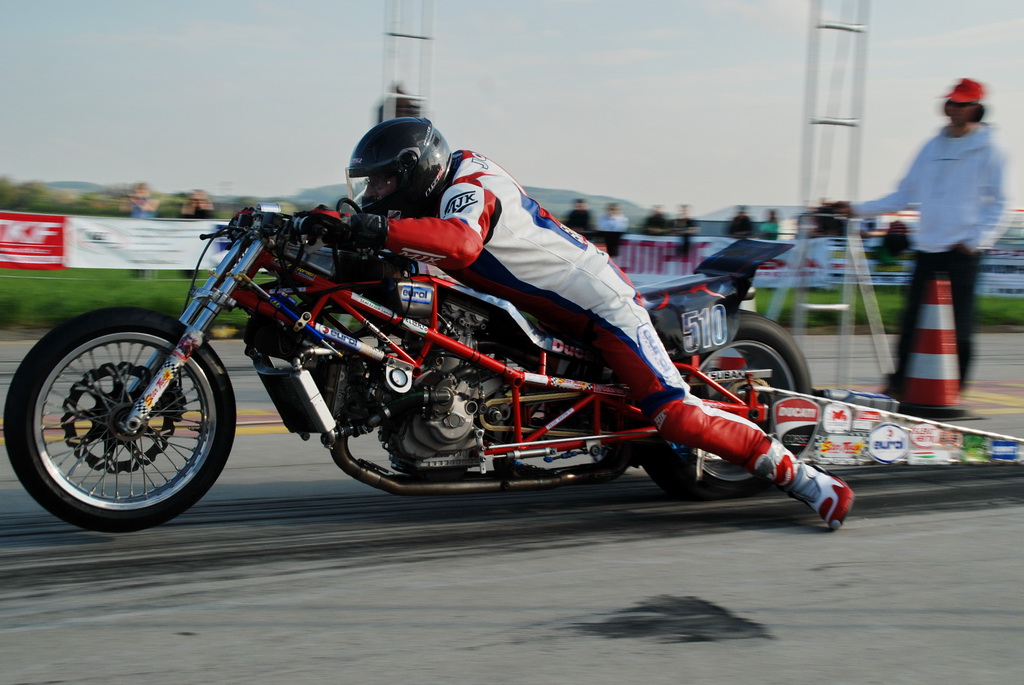 Fredrik Schack started carefully, not taking any risks during his first 400 meters. 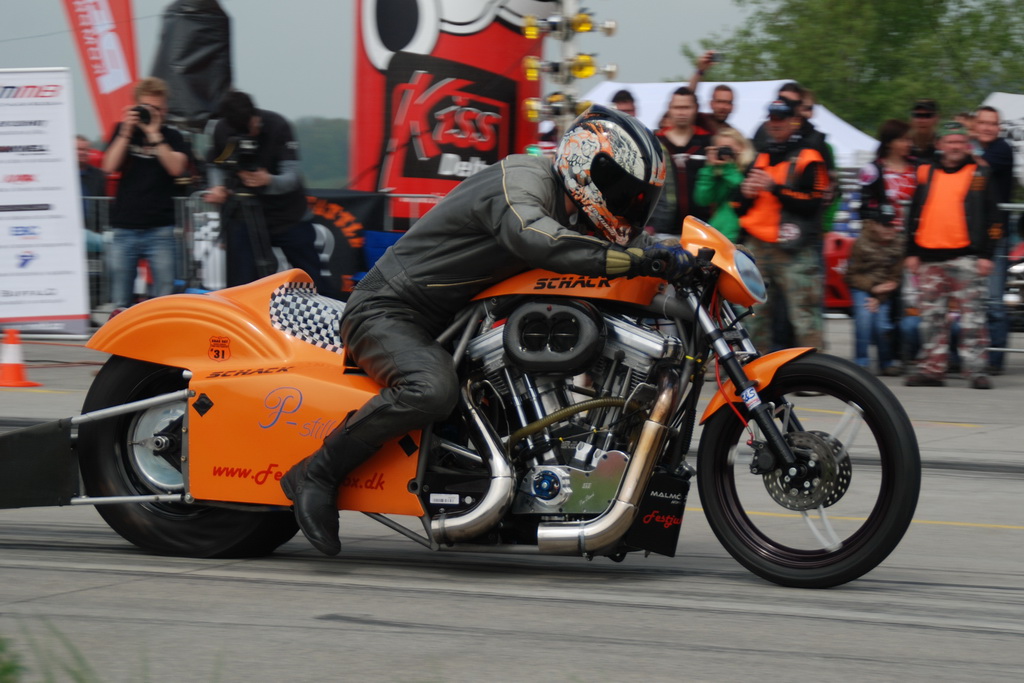 He went from 12 seconds to 10, then 9. Shifting problems prevented him from going faster.
Frank Heitmann suffered wheelspin, and qualified #2. 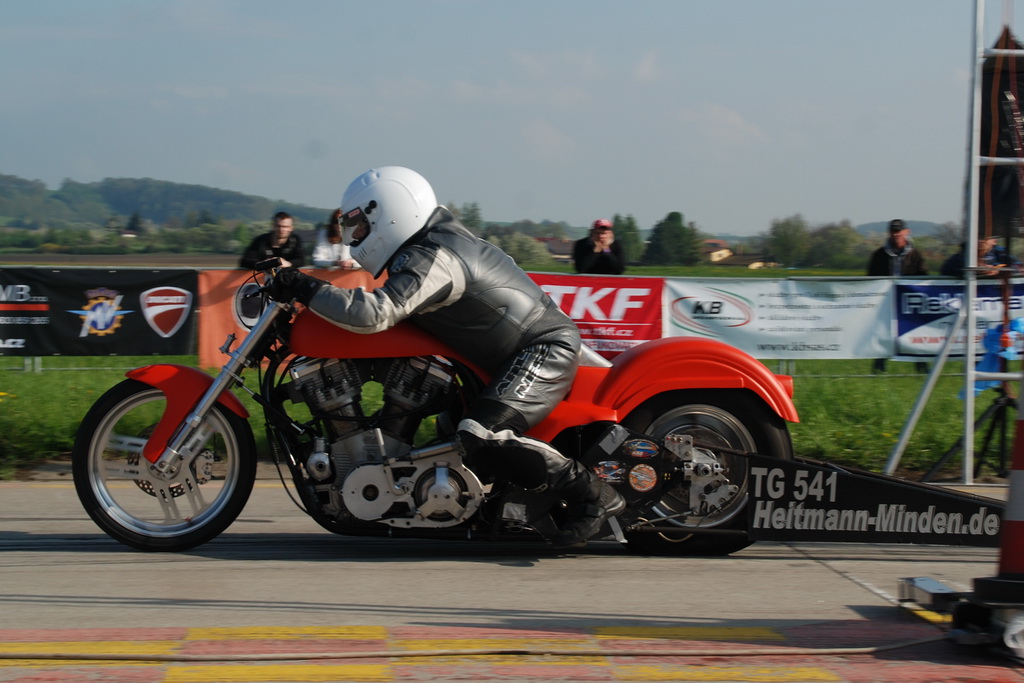 So Herman got a bye run in the semi's, and then Fredrik and Frank had to decide who was to meet Jolink in the finals.

Heitmann was too greedy, and went away before the light was green.
Fredrik also did a better time ( with probably an early shut-off), so might have won it anyhow. 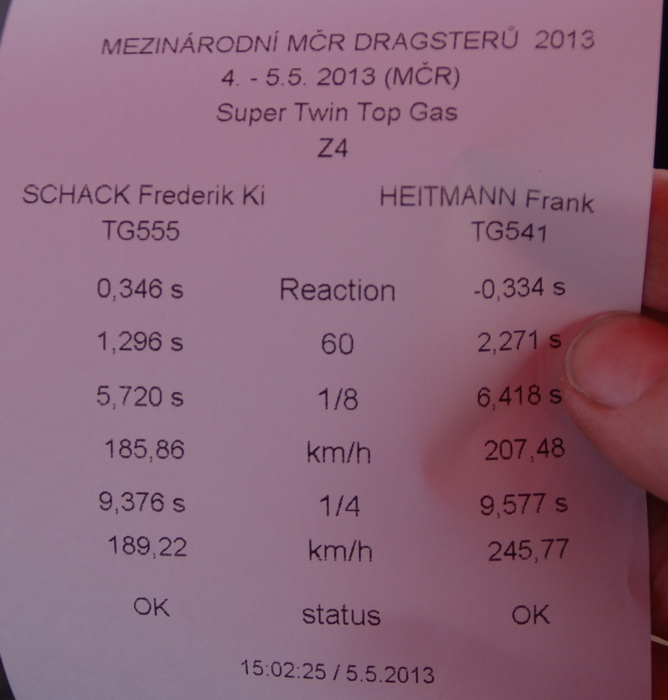 Shifting problems occured again for Schack during the final round, so not much excitement.

After 100 meters it was clear that Jolink was going to win it. 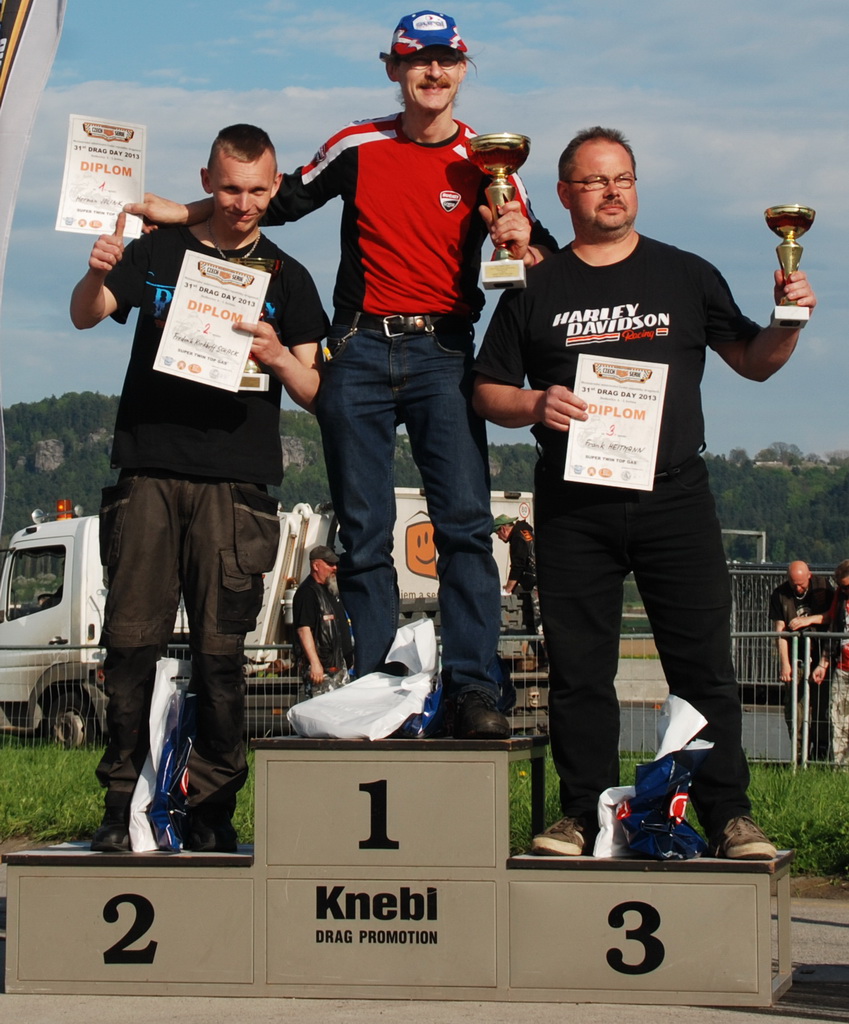 Many thanks to Yvona and the crew for a nice race in a relaxed atmosphere. If any of the next races gets completely cancelled, we'll come back in september.

Now the racers and teams are prepairing for race #2: Avon Park in the UK.
We will probably see Chris van Nimmen there, Harry van Schie, and our champion Milan Kolacny, just to name a few.
Hope to see you all there.

Nine riders were at the annual meeting and decided on this:

Here's some pictures of the 2012 prize giving ceremony. 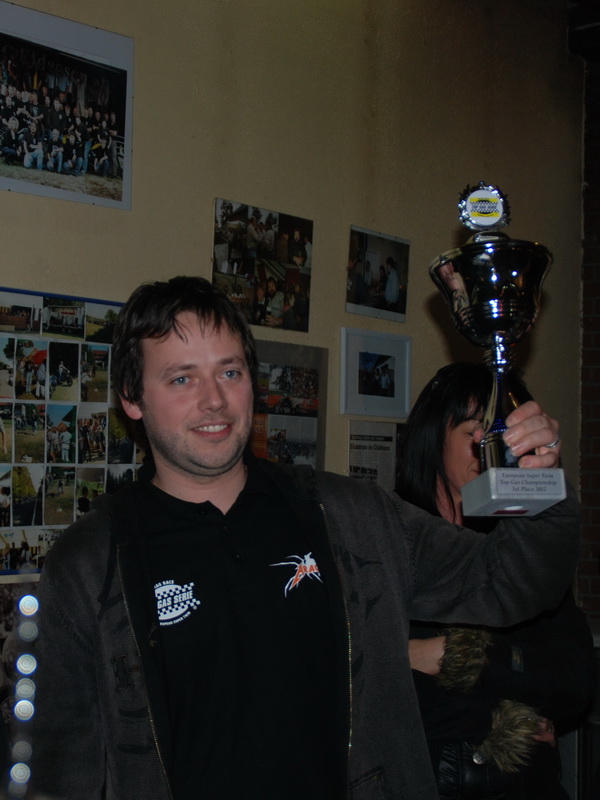 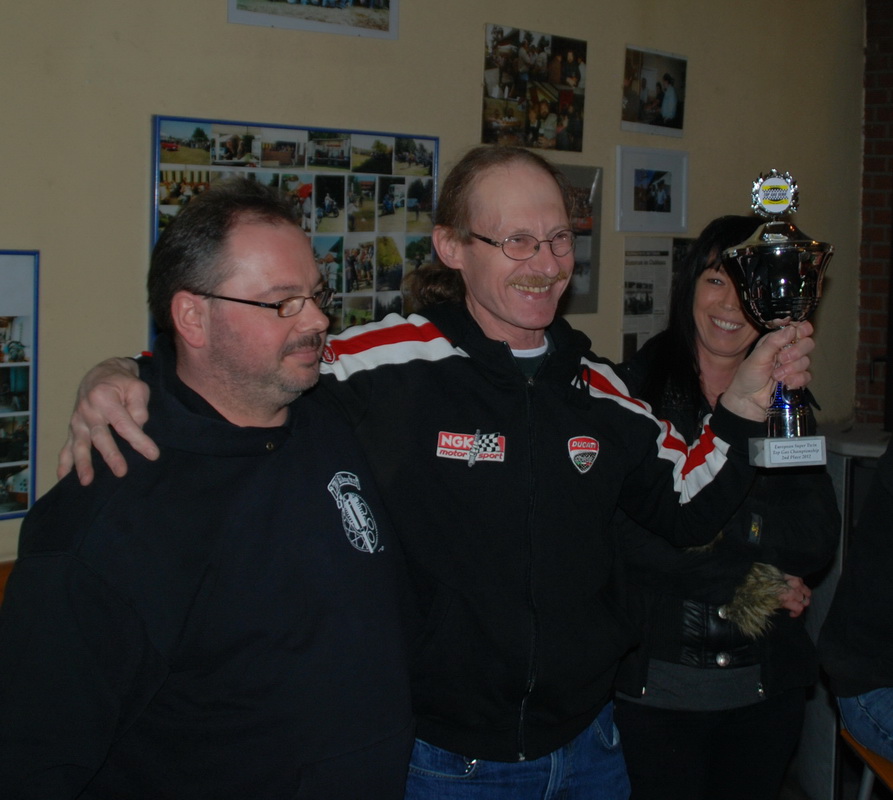 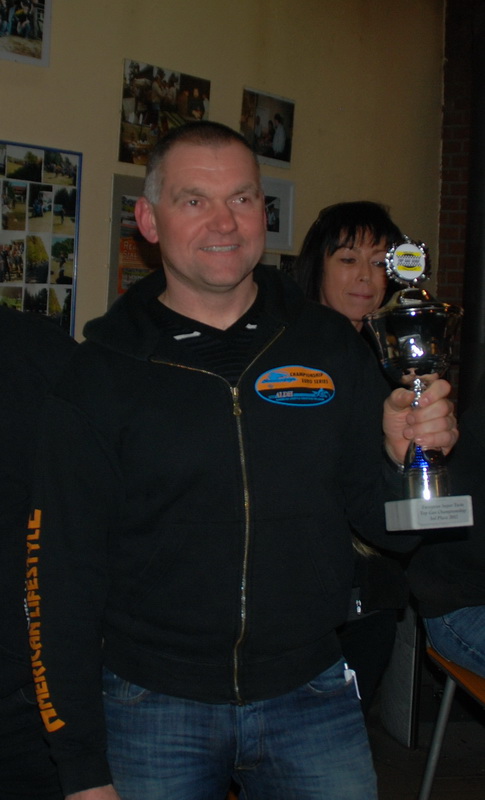 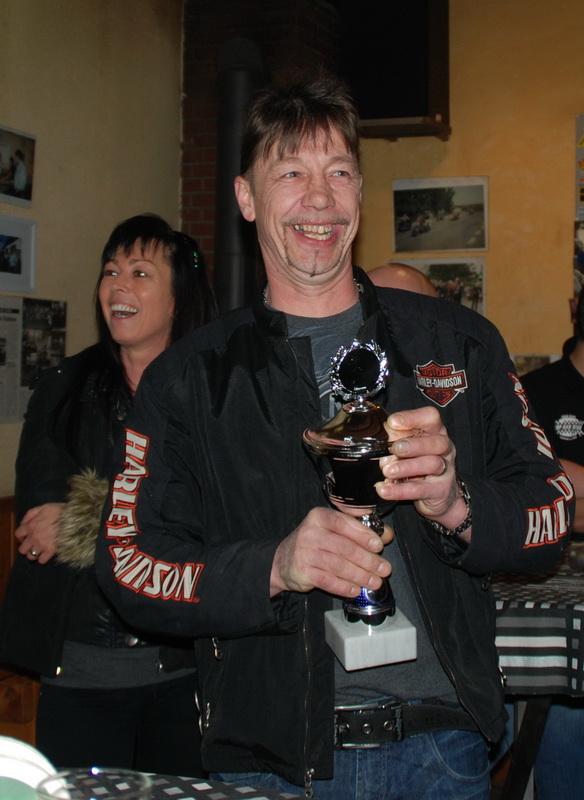 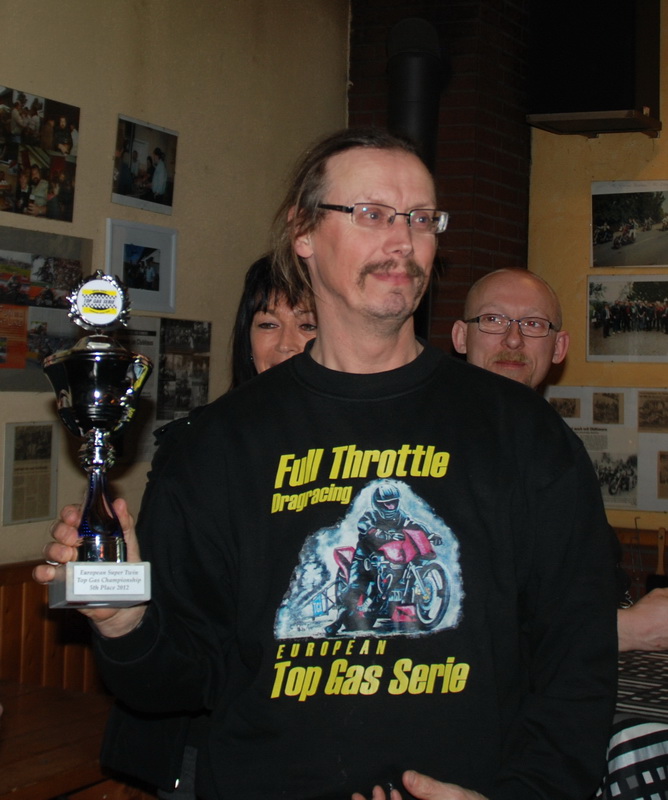 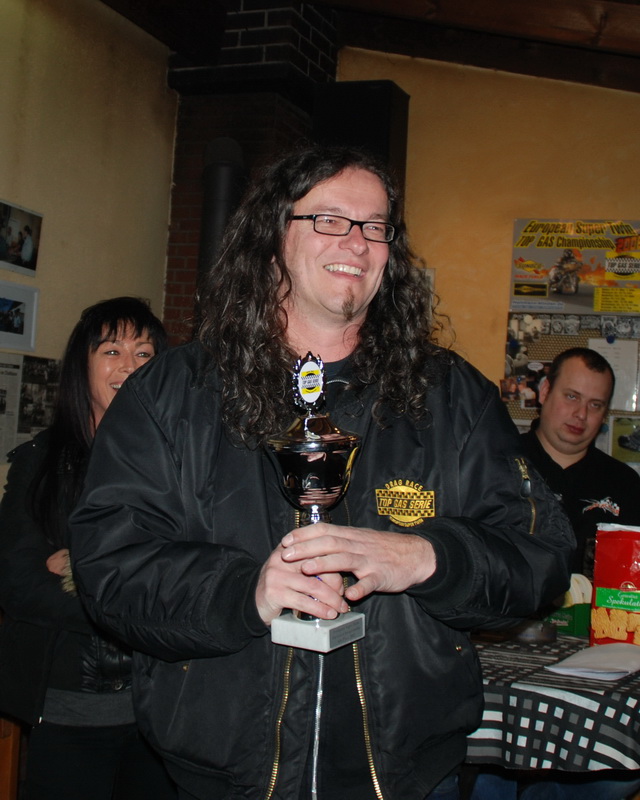 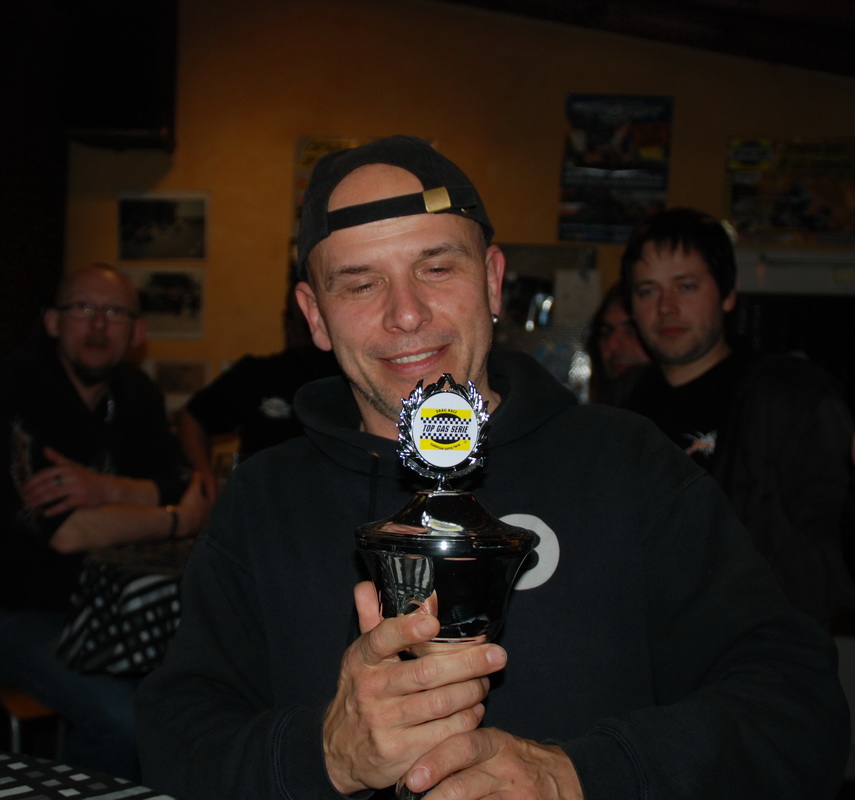 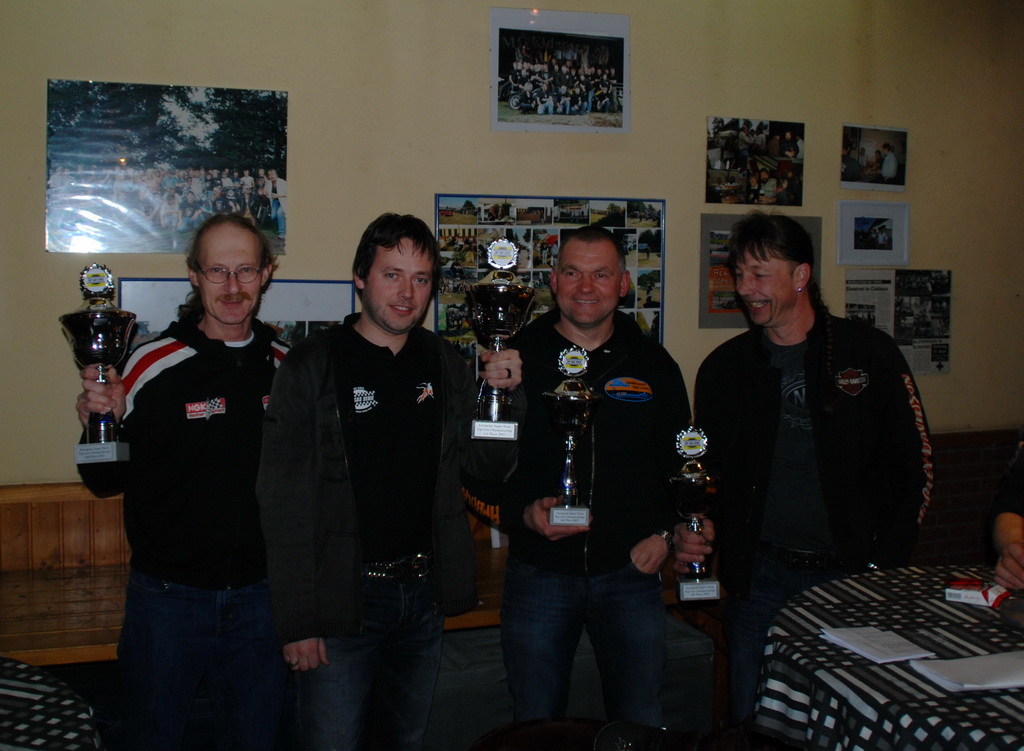 Ex-topgas rider Piet Verhoef will be the new class representative, secretary and treasurer from now on. He took over the job of Bernd Niessen, who announced he will not race in 2013. Former champion and host of the meeting Frank Heitmann will race again next season, and Cord Albers sold his bike to Heino Schönfelt, and is waiting for his new toy from the US. The Caspari brothers will crew for them. Fredrik Schack from Denmark told us he wants to join the class. With two races in his own country, I think he should.

A full preview on the season soon.

Check out the sales page, some fresh fast items there!