An event organised by Quartermile/ELSA and assisted by the German MSTO. Eleven topgassers were on the entree list and nine showed up to race. Below a picture of defending champion Frederik Schack unloading the Buell. 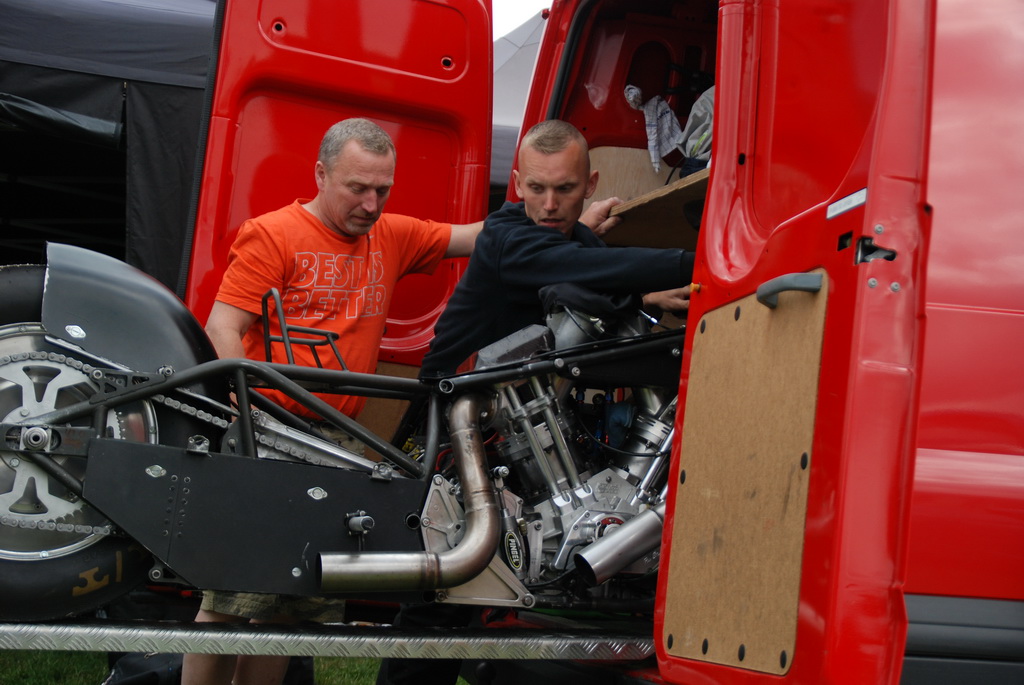 One round of free training in the morning, then three rounds of qualifications were held on friday and four rounds were planned for saturday.

Chris van Nimmen from Belgium started up his "American Lifestyle" bike while his mother father had come to watch him for the first time in his carreer. 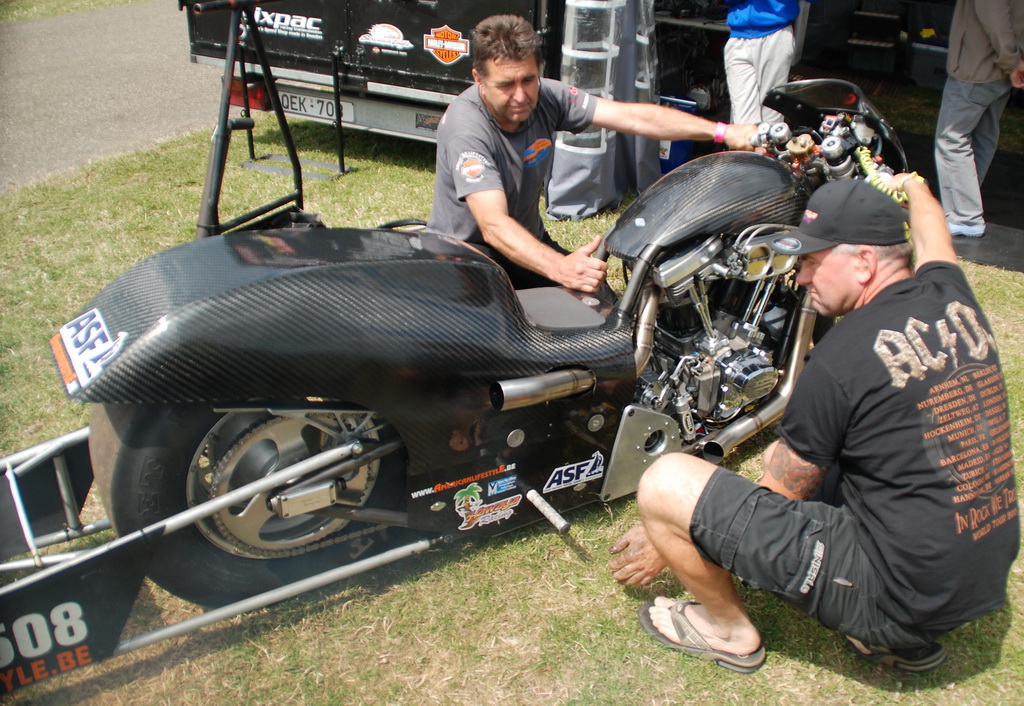 Too much smoke from the rear exhaust, so again a race with much work to do for Chris and his brother Dirk.

First in line and very motivided was Yvana van den Berg of team Shark Attack, who made her debut in the class on a Suzuki TL1000 that she had to share with team mate Patrick Kras who raced it in the Funnybike class. 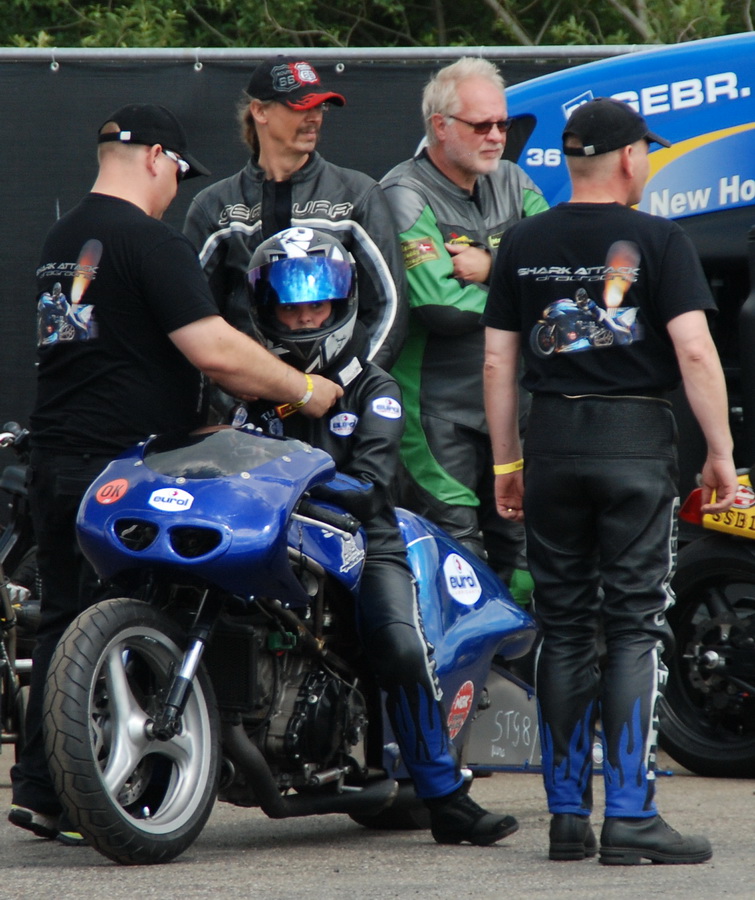 Lot's of problems at the first half of her first pass, so lots of time wasted, but she made some speed at the end.

Lars "Birch" Andersen of team B&B from Denmark had been going faster and faster with the ex-Cord Abers bike during the first three races of the serie this year. 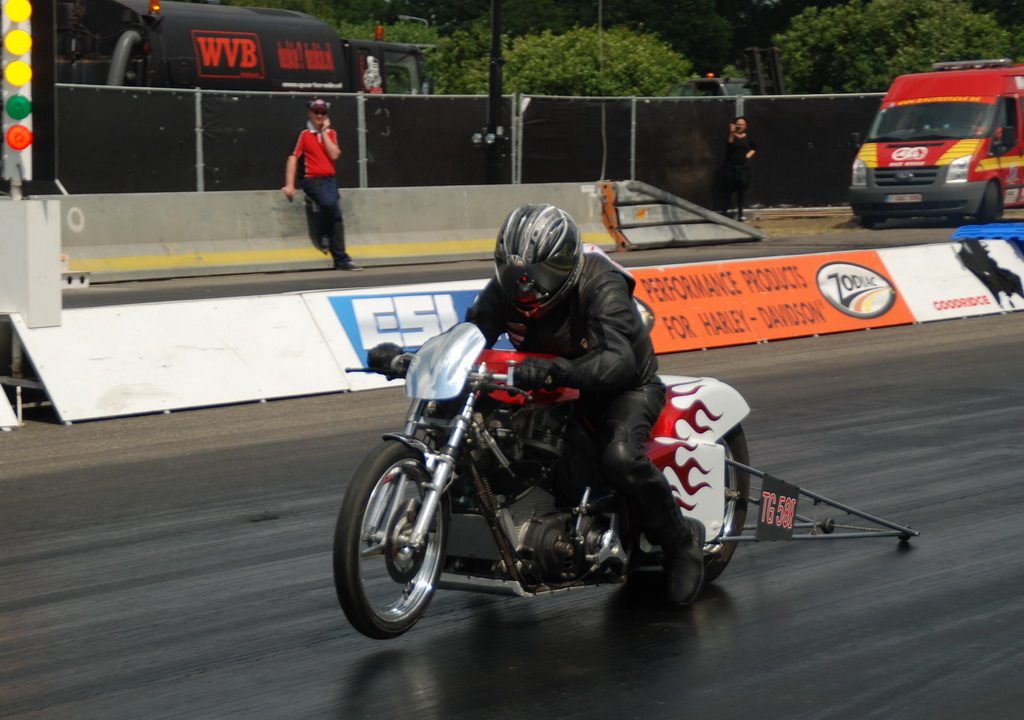 A nice launch but no personal best for Birch, a 9.0 instead. Harry van Schie had a great launch in the left lane, but the prime belt broke during the run. 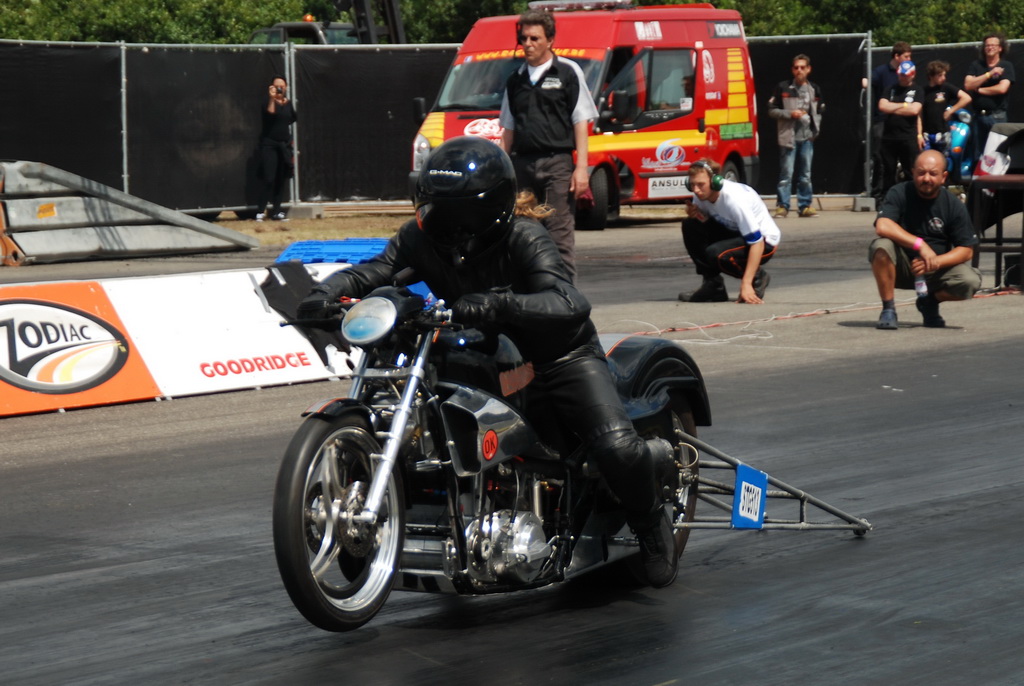 Still unidentified problems for Cord (picture above), and a poor result. And a nice and straight pass of Herman Jolink in the left lane that put him on top of the list. And that was it for round one, here's the first list:

Herman Jolink was first in line for the second round and did a carbon copy of his earlier run. Below a picture of Jolink on his homemade Ducati dragbike. 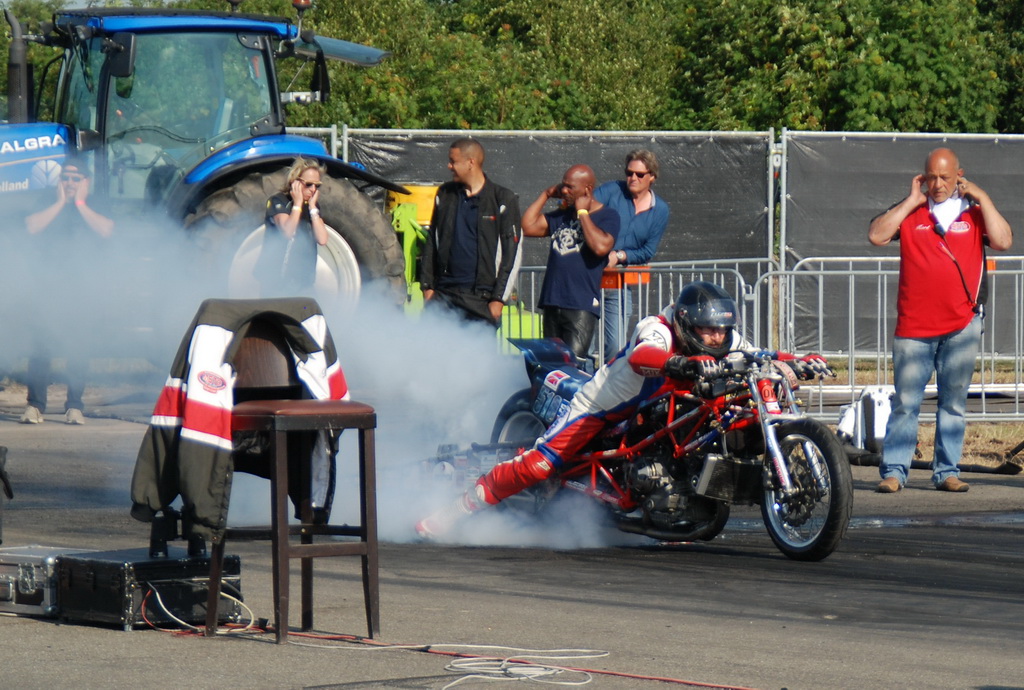 Not enough revs for Yvana during her second attempt, so the engine stopped at the start. But she got back into line-up and allowed to go again. Birch tried again, but did not improve while Harry's bike stopped before the 60-foot mark.

Then Yvana van den Berg who had problems keeping it straight, but improved.

And in the other lane Frederick Schack did his first pass of the weekend and a new personal best of 7.665. Well done, Frederik!

Yvana van den Berg again first in line, and she improved to 10.5, nice and straight, while Birch had problems getting started, and went back into the line-up.

Peter Niklas still had some work to do on his new "Derringer Big Block", so he was forced to skip a few rounds, but got it together at the end of the day and made a powerfull loud burnout and a check-out pass. 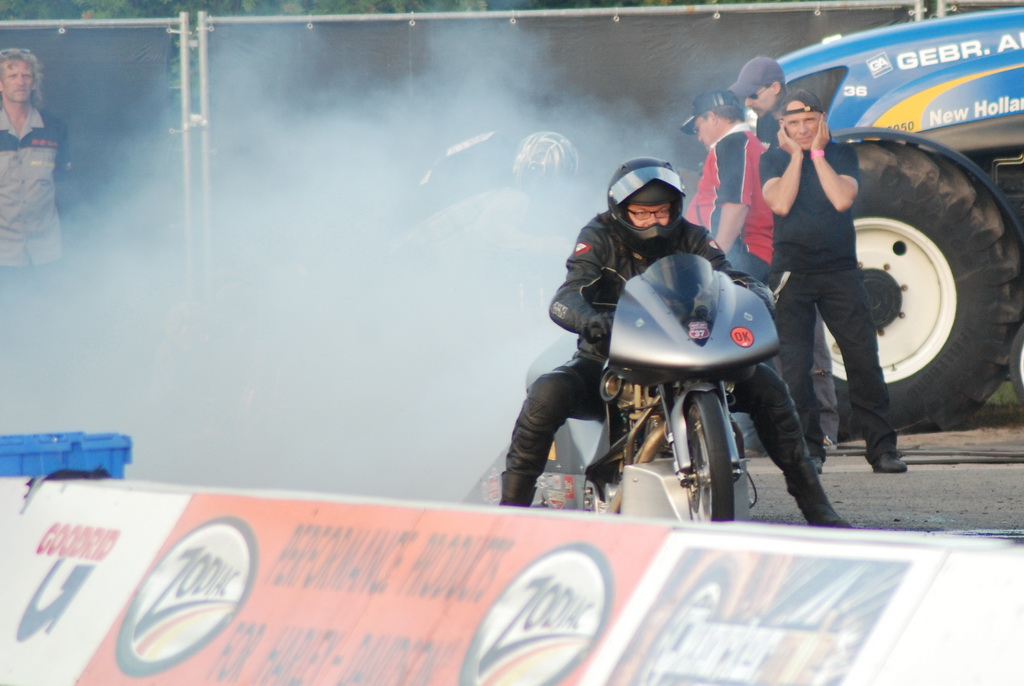 Peter's team mate Christian Bruhn already wrecked two Honda engines this season, and did not bring a bike.
Bruhn's plan was to compete at Dragday 2 in the Czech rep with his Ducati, and prepair the turbo-Honda for Hockenheim. So all "Sideburns" concentrated on Peter's bike.

Half way down the track, Harry van Schie passed Niklas and Harry claimed the third place on the list.

More launch revs for Jolink, and 0.15 seconds better then his previous runs, widening the gap between him and Harry who had just run 8.74. In the other lane, Birch tried hard and was close to the guard rail during his run, but was unable to improve. 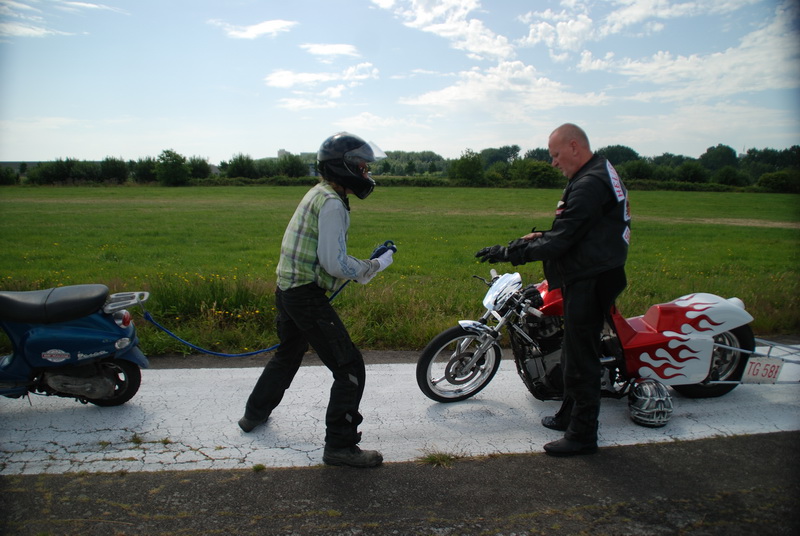 On saturday the weather was great. Yvana van den Berg made a good test pass that morning, 9.5 seconds, and het first valid run on that day resulted in 9.9 seconds. 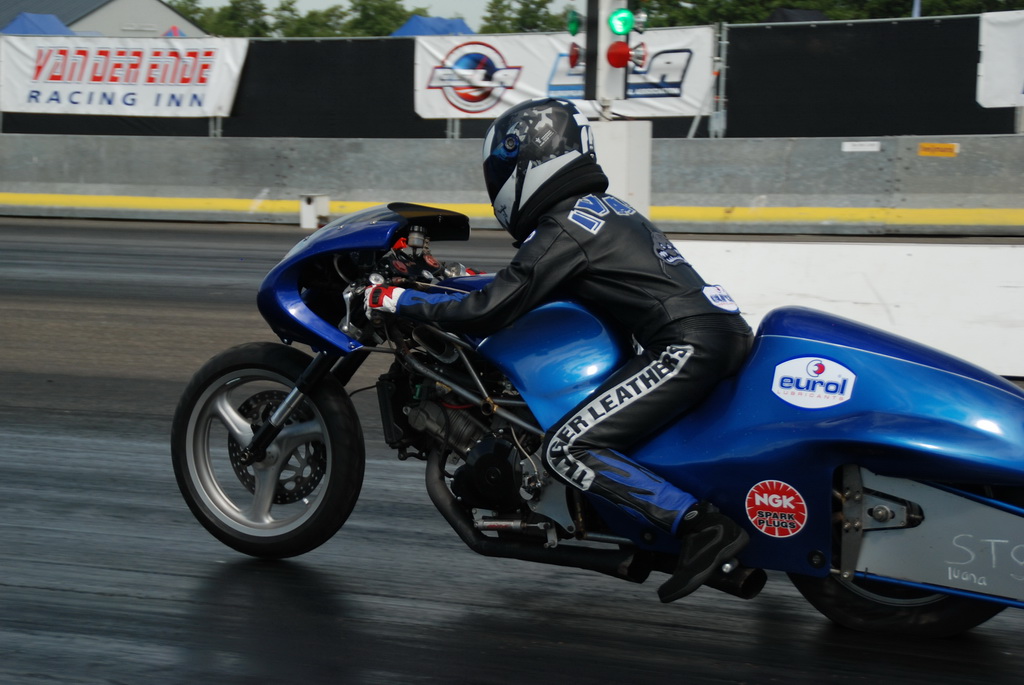 Cord Albers had checked all electrical components of his bike and, with the help of the Caspari brothers, manage to find the cause and tackle the problem. 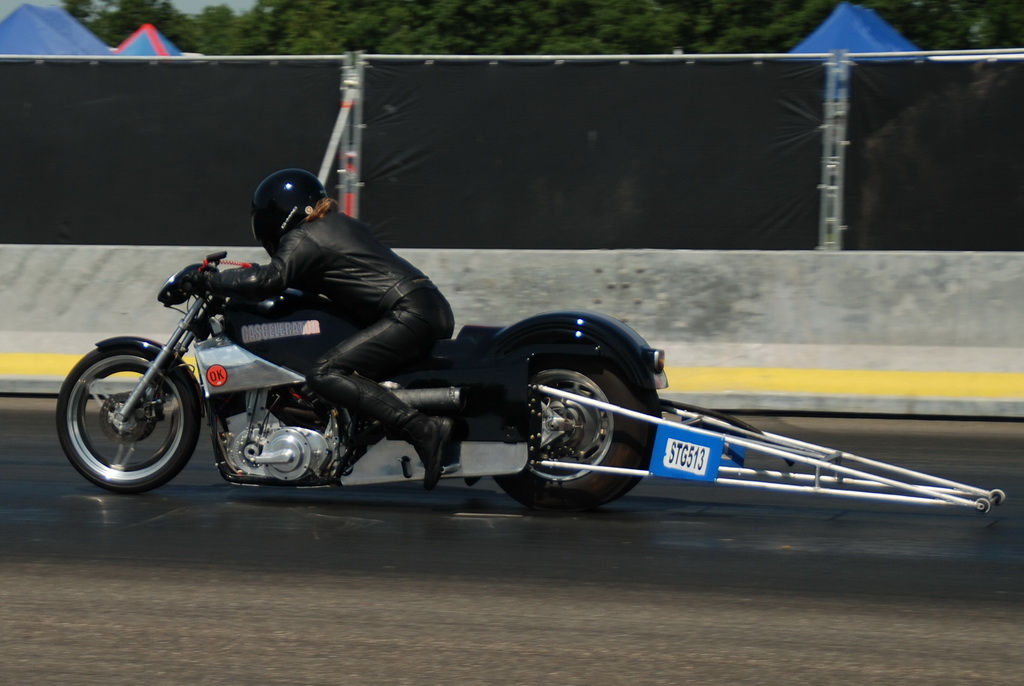 A great 8.13 seconds by Cord, with a relatively low end speed that indicates that there's a lot more in it.

An uncontroled launch by Olaf Menzi at his first attempt. 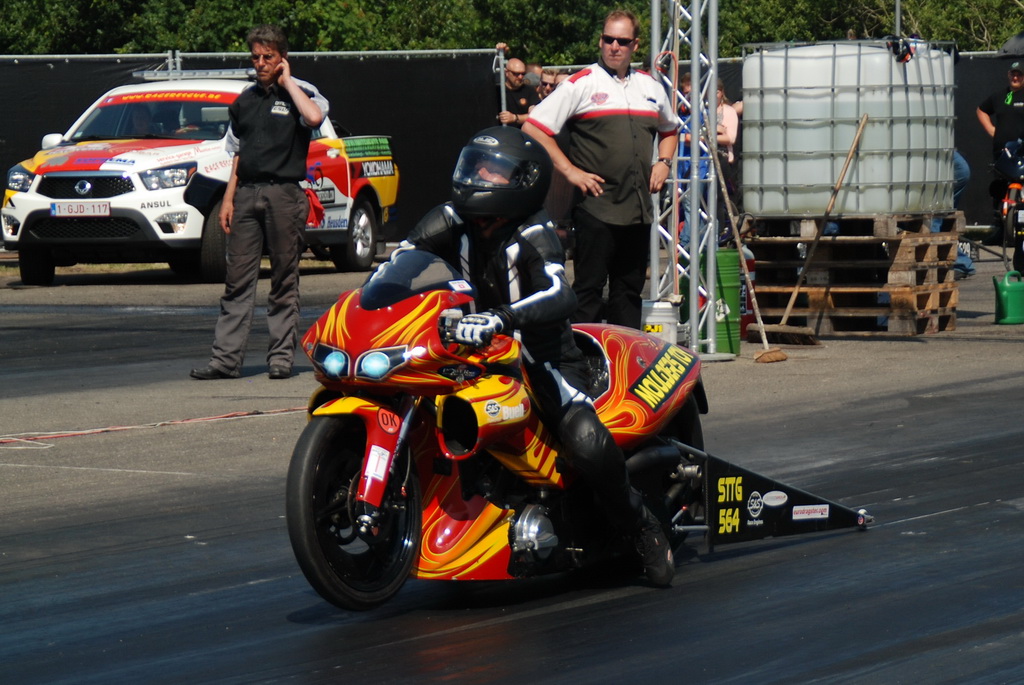 Herman Jolink was very consistent, did 8.43 twice on saturday. And Schack also made a pass on saturday. 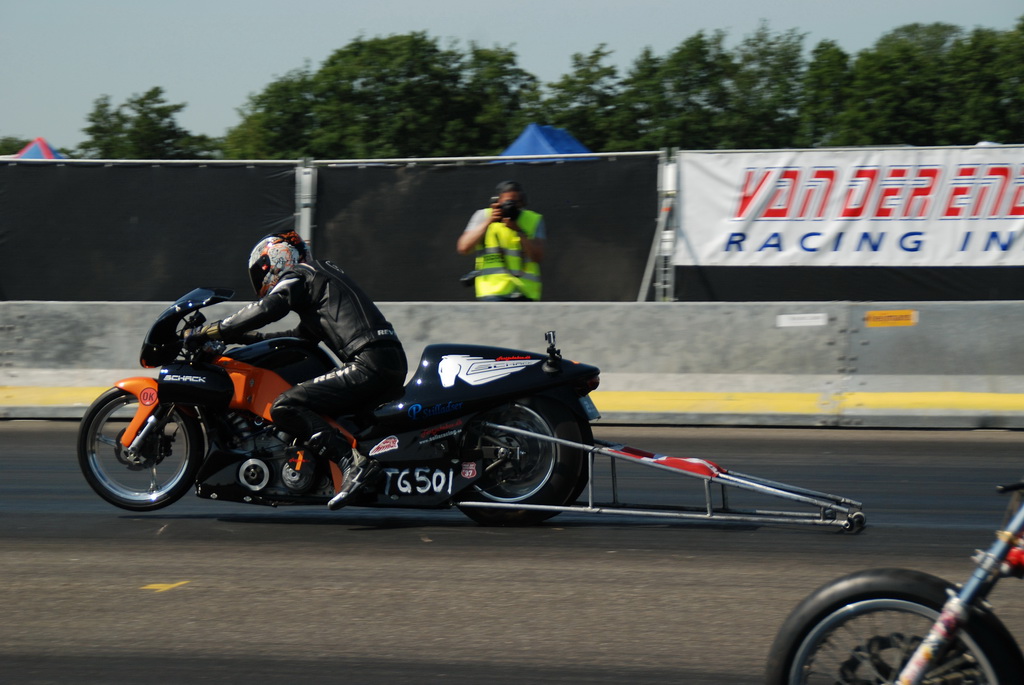 A nice very nice pass, but he did not improve.

Our friend and former topgasser Marc van den Boer from Belgium unloaded his homemade methanol-injected blown V-twin dragbike for the first time at a race after a big renovation last winter. 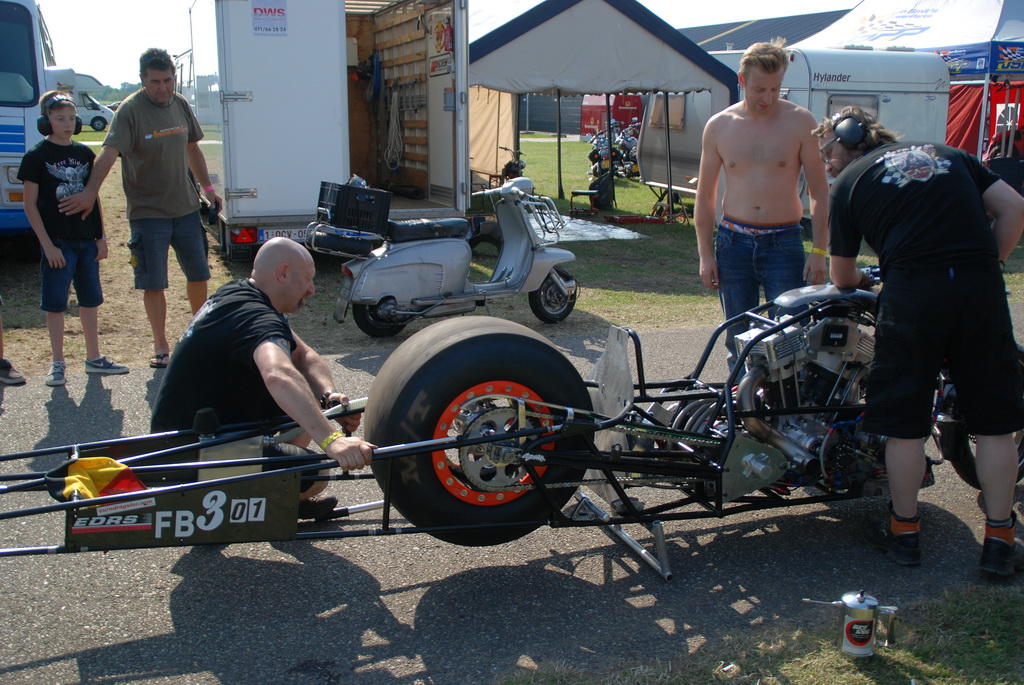 New CNC machined engine case and a different prime gearing are the main changes, besides the new graphics on the body. Marc warmed it up and shot 8.16, "straight from the box", and qualified #4 in the Funnybike class. 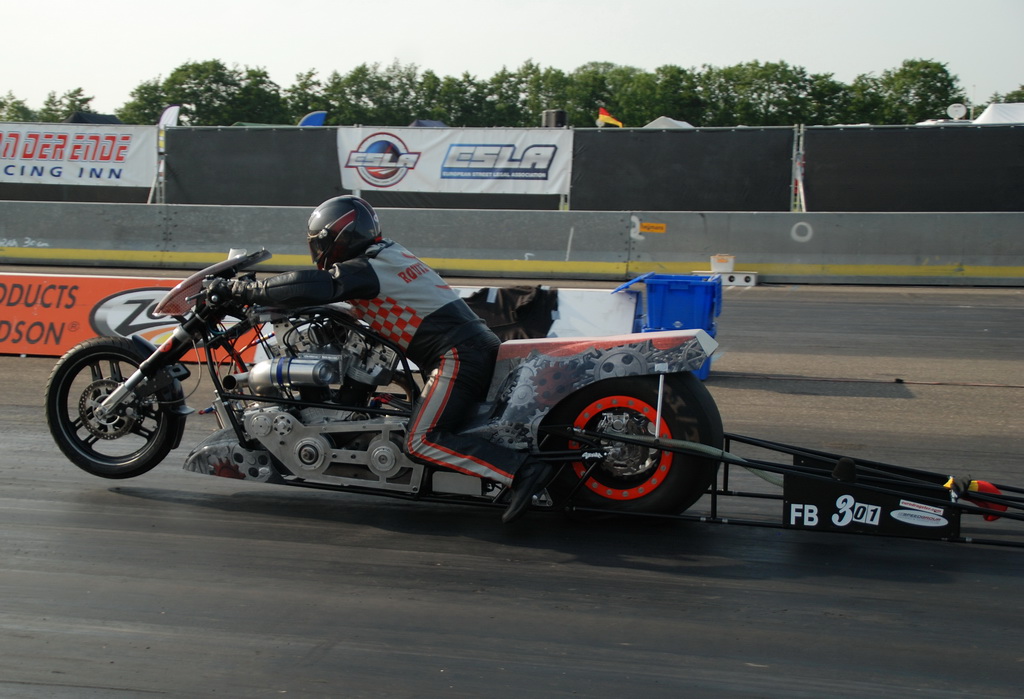 Marc's countryman Luc Raeymakers had already wrecked the engine of his Kawasaki funny bike on friday, Sven Fagan from Denmark had broken his wheelybar and had gone home to build a new one. Maarten Zijlstra arrived late, wrecked a gearbox and went back to Amsterdam early, and Thomas Joswig from Germany went home on sunday morning after looking at the weather station. A small bearing in the gearbox stopped racing for Marc after his bye run in quarter finals on sunday. Van de Belt and Kras got a bye-run in the semi's of the Funny's...

After another day of wrenching, Peter Niklas tried to make another pass. 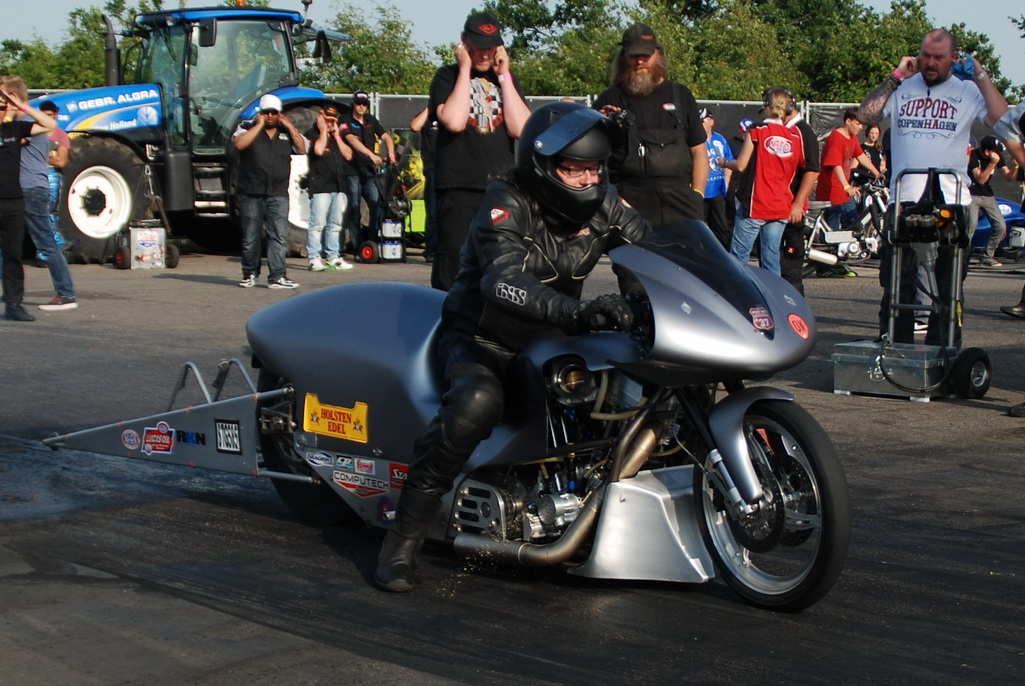 But a bloken oil line prevented him from doing so.

Chris van Nimmen had gotten his piston rings in from his workshop in Antwerp and in the afternoon he made is first pass. Van Nimmen aborted his run and passed the finish line after 55 seconds. 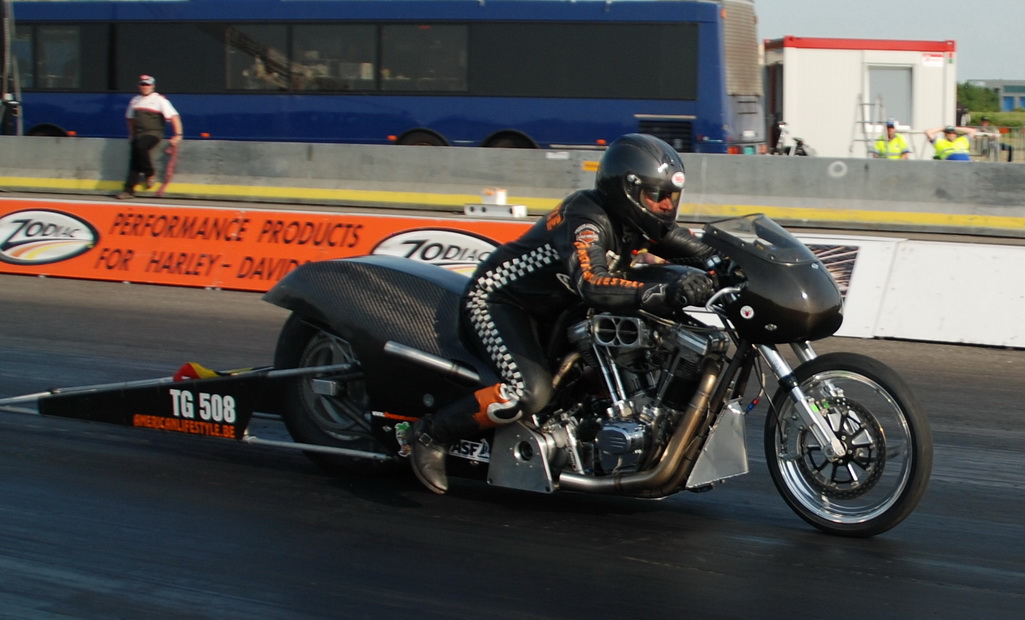 The last place on the list, and the alternate for the first round of the eliminations. The engine works fine, so Chris can concentrate on the gearbox again.

Then Jan Malmberg walked into the pits. Unable to find what's wrong with the bike, he came as a spectator with his wife and daughter. It was good to see them, but I'd rather see him and Mats Larsson and their bikes and the big orange bus... Anyway, here's the final qualification list.

The weather forecast for sunday looked bad, so the race director decided that eliminations would start in the early evening on saterday already. Team B&B found damage to their starter, and thought they had not enough time to repair it, so they packed everything quickly and went home. But they threw the towel a bit to early, as it took the timing crew a very long time to produce the flow charts, and the later it got, the bigger the chance that the track would get moist. A big oil spill stopped all the action for saturday, so the topgassers could take their leathers off and rest untill the next day.

Sunday started wet, but it dried up quickly, and the track dryer also warmed up the surface. A bit of confusion about the running order as Yvana entered the water box first during the quarter finals, while she was the third pair on the list.

Peter Niklas found low oil pressure during warm up of the bike, and did not show up for his quarter final round.
First alternate Chris van Nimmen entered the race, but had no chance against Frederik Schack who backed up his personal best with a great 7.68 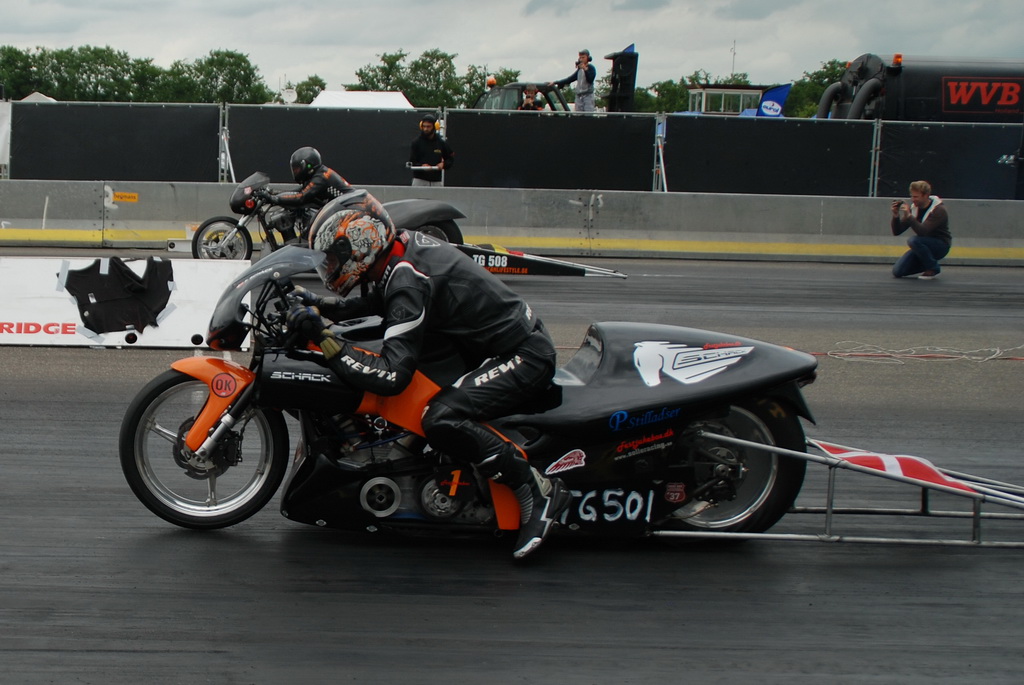 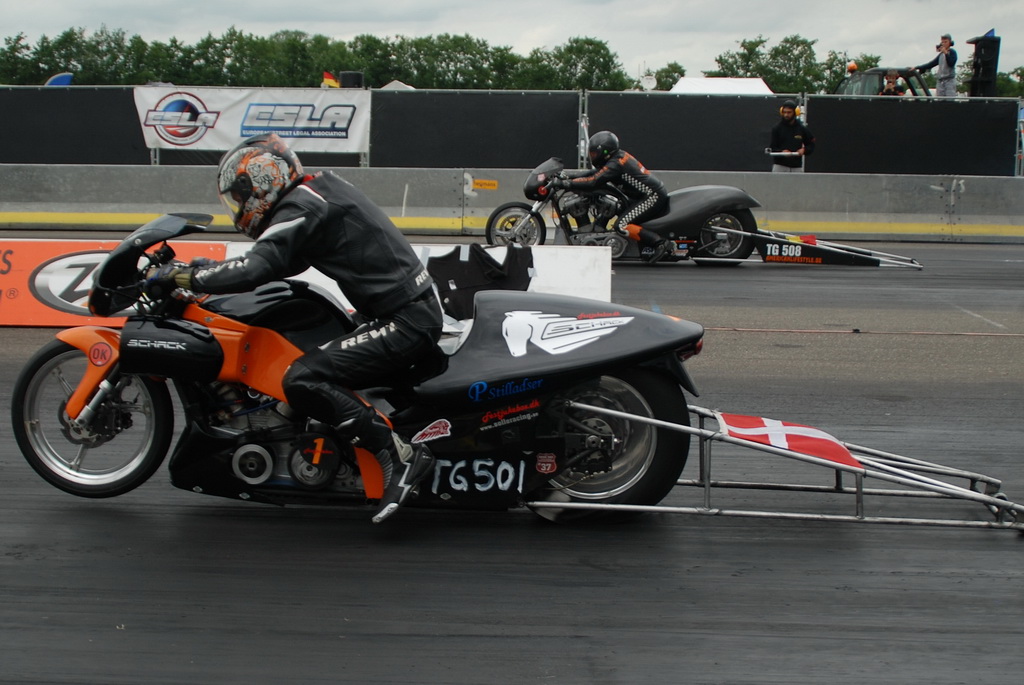 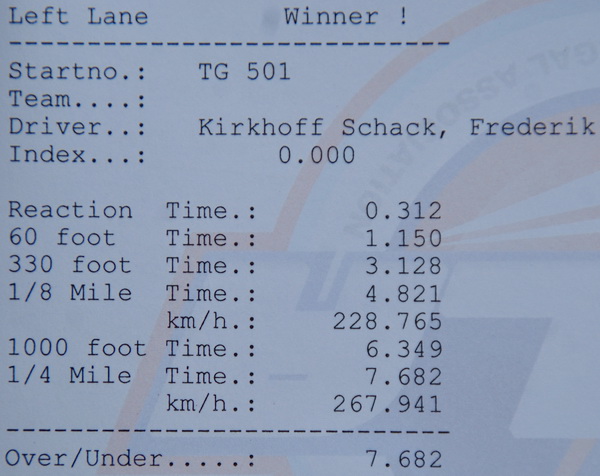 Harry van Schie got a bye run, while team B&B was already in Copenhagen. 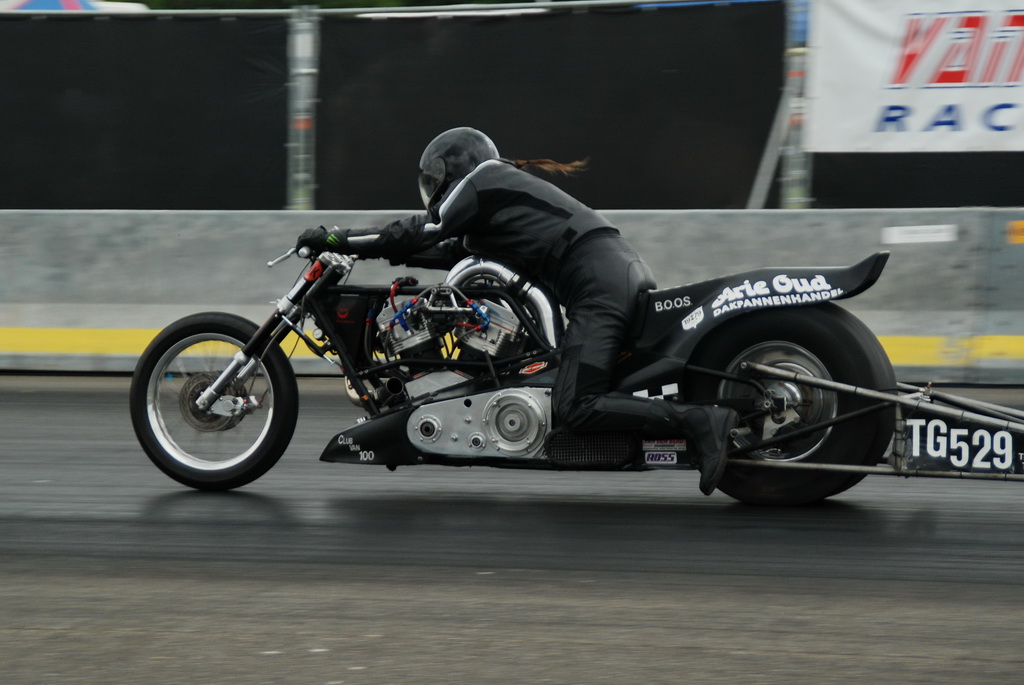 Her years competing with the Juniors payed off. Yvana will also join at race #5 of the serie, the NitrolympX at Hockenheim. 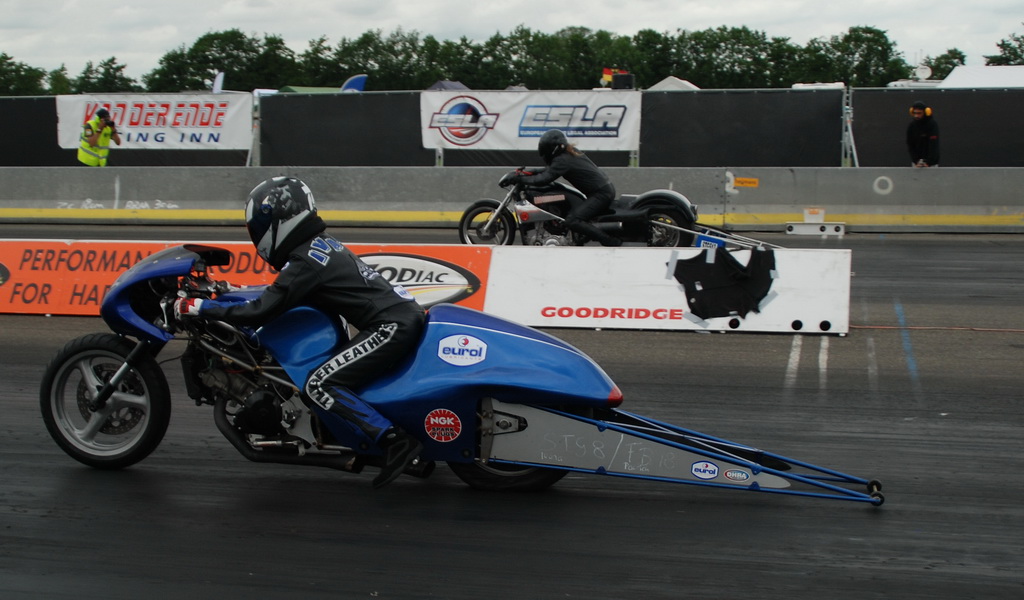 Herman Jolink usually goes quicker during the race, but this time he slightly slowed down. Still, a nice and straight run for Herman, and another uncontroled launch by Olaf Menzi in the left lane. 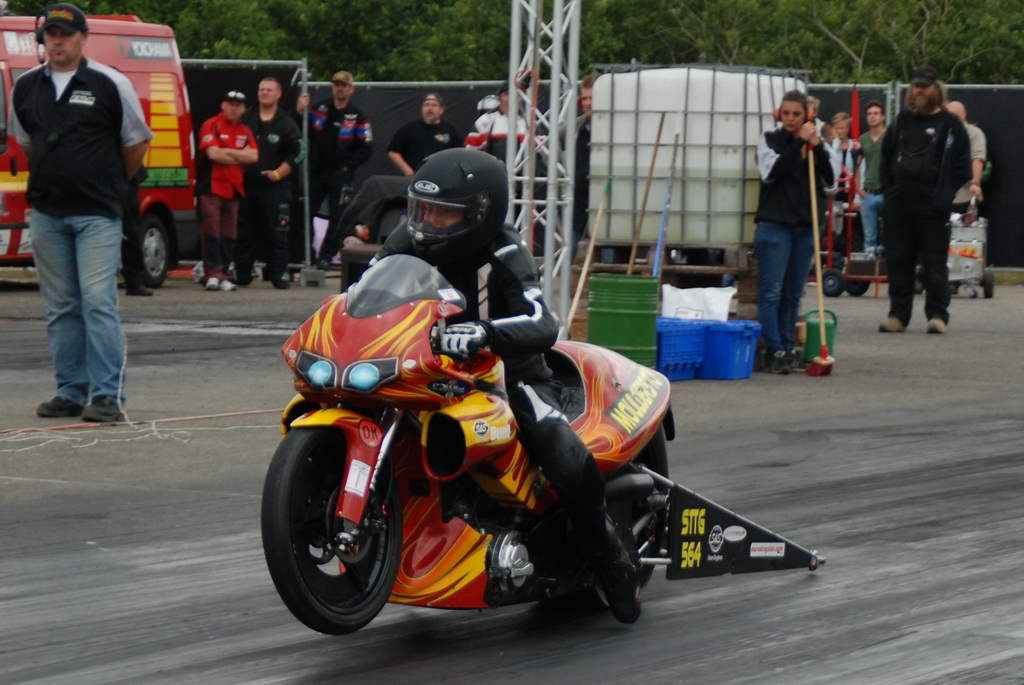 Olaf went towards the center line, and off throttle a few times, unhealthy for the gearbox of the Buell. 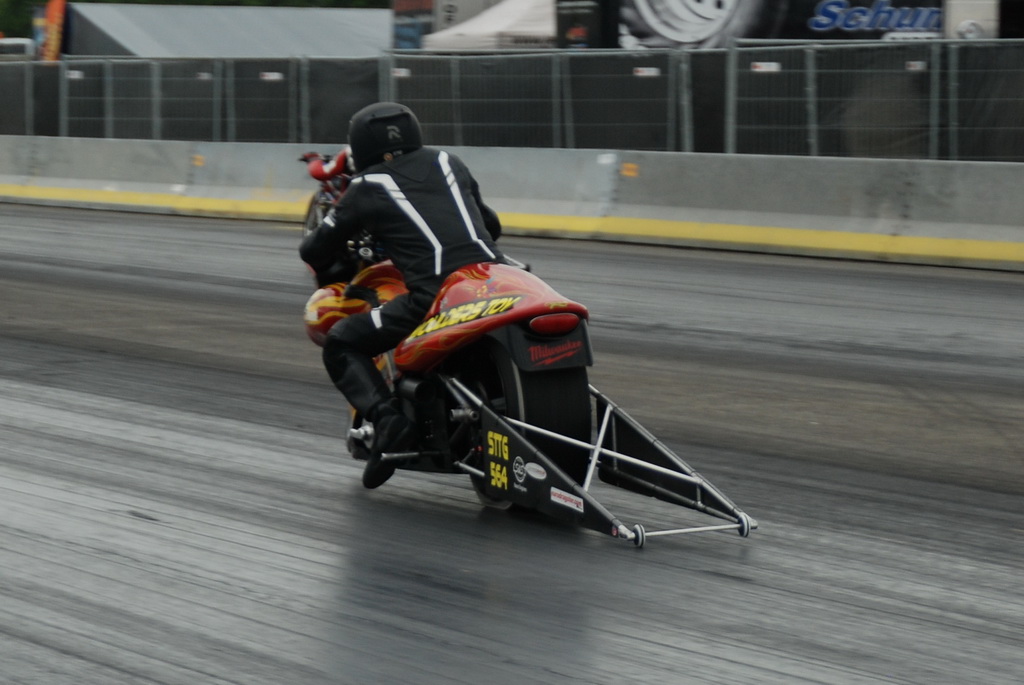 The call for the semi finals came way to soon, but the class representative got the racers another half hour to prepair.
Cord Albers found a heavily burned clutch, damage beyond quick repair, so Herman Jolink got a bye run in the semi finals while dark clouds were moving in. 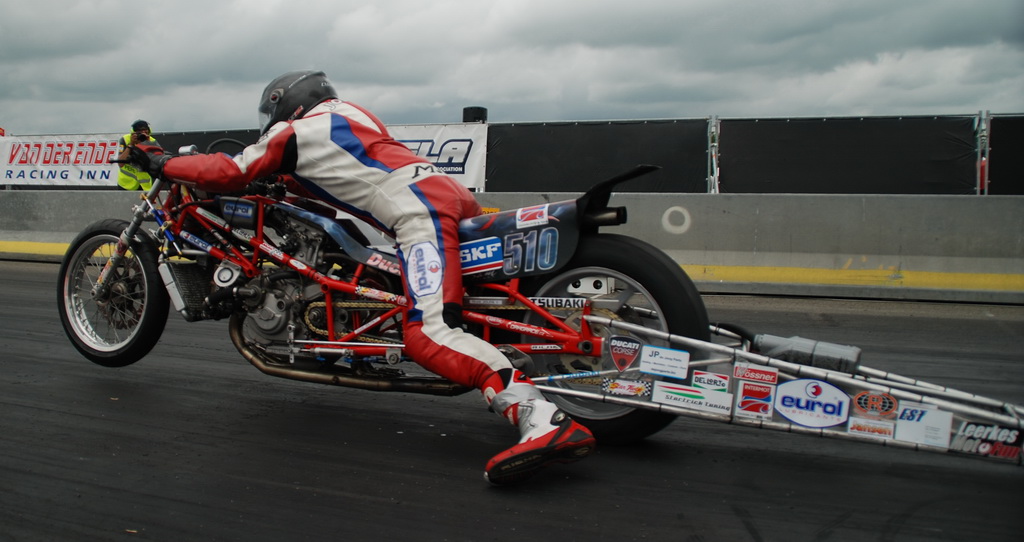 But a minutes before he ran, Frederick Schack did another great personal best of 7.58 seconds, while Harry van Schie was to carefull at the startline. Harry's bike stopped before the tree.

A computer failure prevented the data being logged, unfortunately team Schack did not get a time slip of their best run so far. But here's the score board:

So Herman and Frederik prepaired for the finals. While they were waiting for their call, the predicted rain came, and ended the race.

Jolink did not loose much points in the championship and is still in place #2. But the difference is more then two rounds now.
So team Schack is stronger in the lead while they got the bike running the way it should. That should give them confidence for Hockenheim, the next race in the Euroserie.

Many thanks to Margot, Emrys, ESLA, MSTO, and all the people who made it possible. It was great to be back at Drachten!