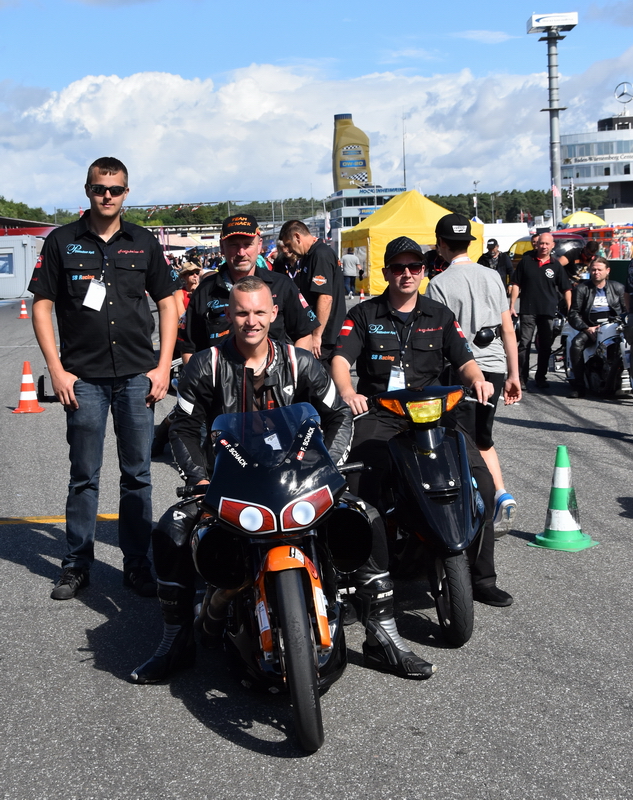 For the 31st time: the NitrOlympX at the Hockenheimring. A huge entree field with about 300 teams from 15 different countries. The track was in excelent condition, and seventeen topgas racers showed up to race.

Cord Albers was one of last year's finalists, and one of the favorites of this year. Just like at Bechyne, István Gyermelyi came to help him. 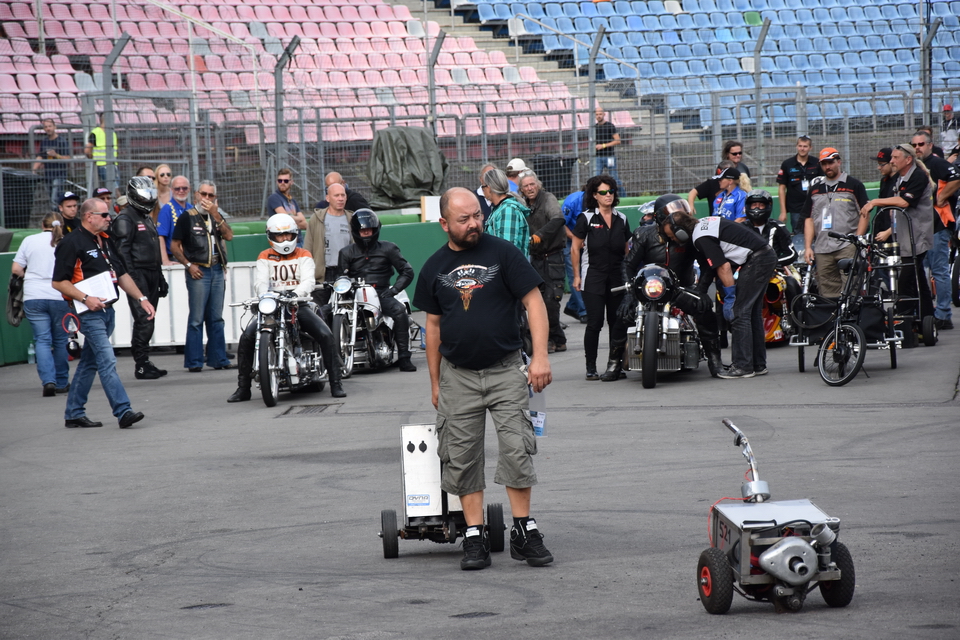 Cord did 7.68 in the first round, and took out Jorg Lymant in the quarter finals with a great 7.555, but wrecked his gearbox beyond quick repair while doing so. 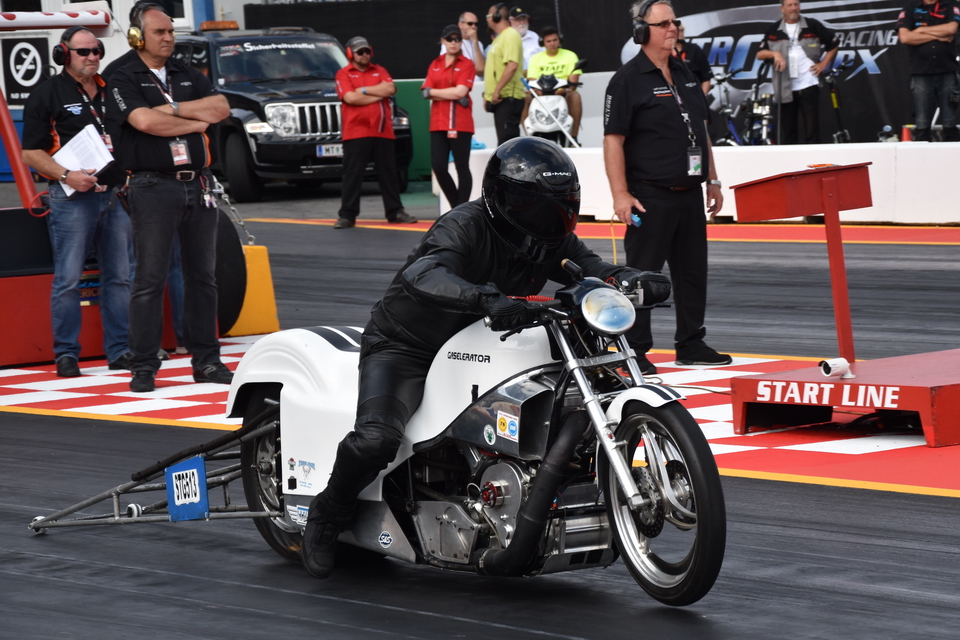 Cord is not certain he'll be able to repair in time, but he'll go to Mosten anyway, to help his friend Gerd Caspari.

Charly Abraham was in the finals two years ago and suffered gearbox problems last year. This year it went a little better, but still far beyond the usual level. 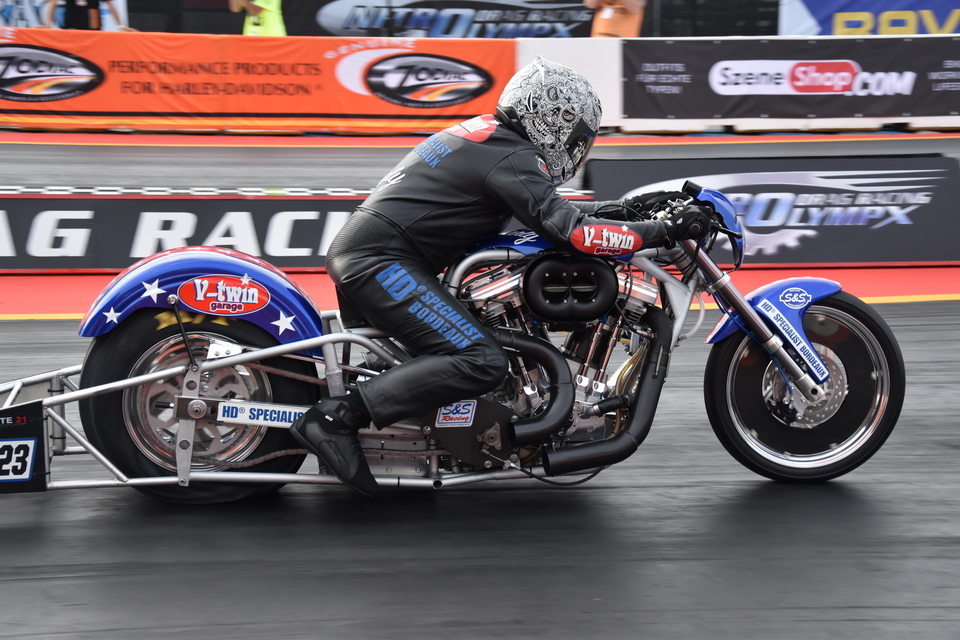 Charly qualified #8 and was the first victim of Frederik Schack on sunday.

Chris van Nimmen qualified #5 and was beaten by Gerd Caspari in the quarter finals. 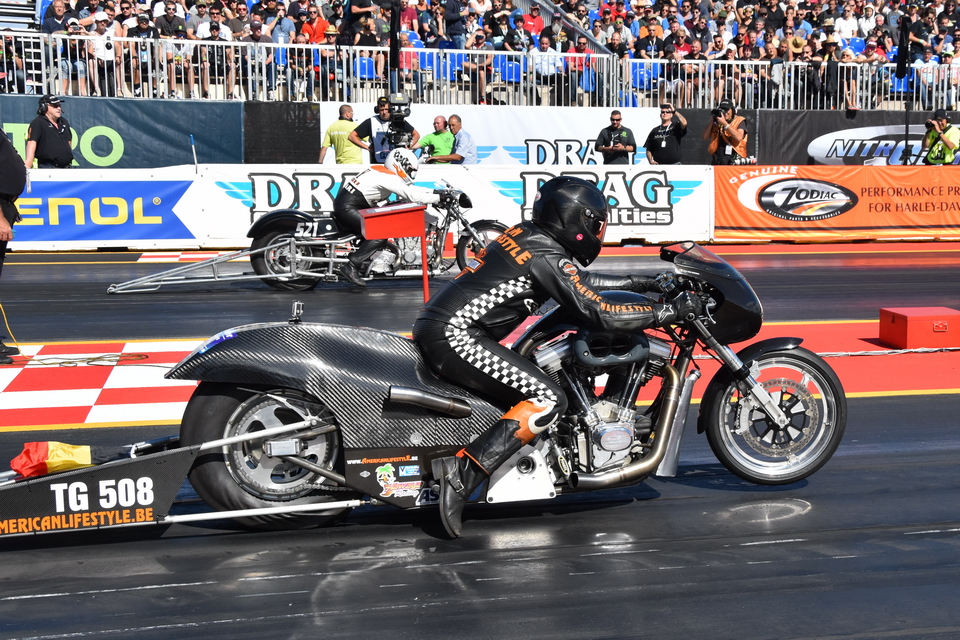 But his bike went quicker every round, and Chris has some more ideas to tune it further.

Serge Pinet was still feeling a bit embarrassed about last year's performance before the race. 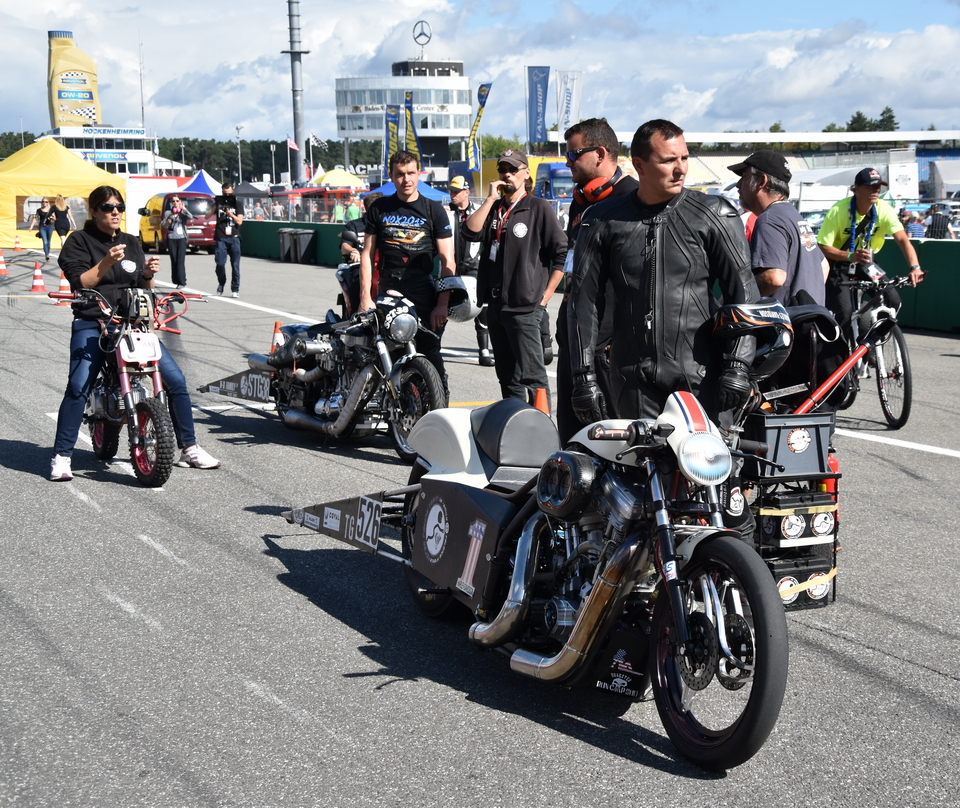 But Sergio made no mistakes this time. 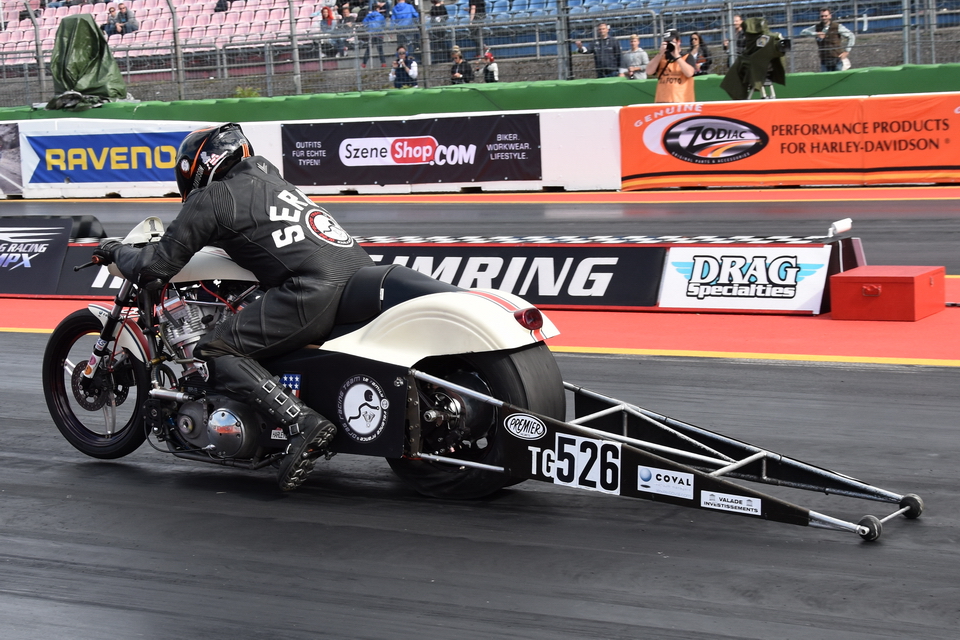 Serge Pinet qualfied #3, beat Herman Jolink in the quarter finals with a new personal best of 8.11 and got a bye-run in the semis. Too bad his gearbox failed in the finals.

Gerd Caspari had a great weekend. His team mate Cord Albers had prepaired the engine, and former topgas racers Rainer Oberle and Bernd Niessen were assisting Gerd at the startline and in the pits. 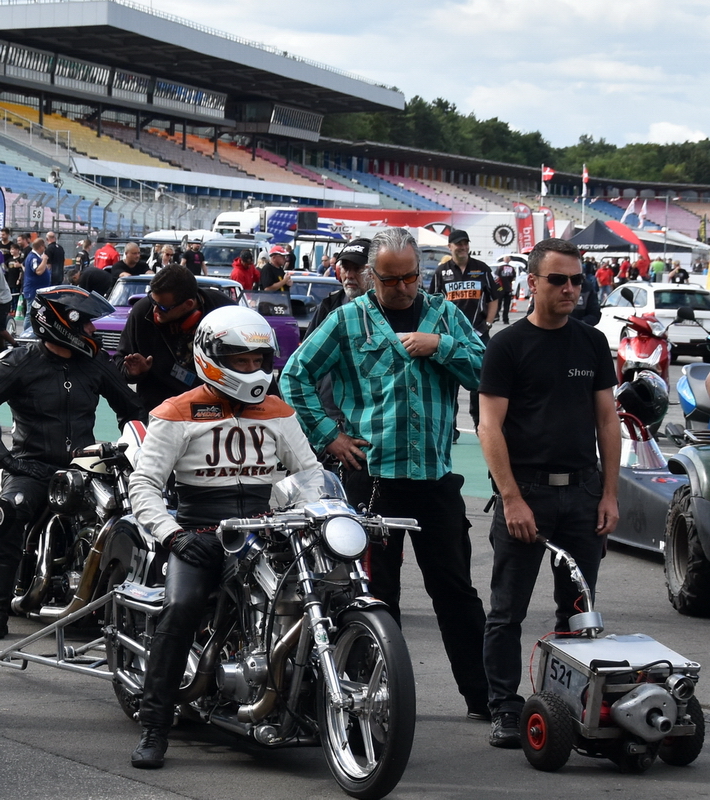 Gerd took place #4 in round one, improved his time to 8.44 in round two and kept his place. He took out Chris van Nimmen in the quarter finals with another 8.44 but was not happy with the way his pass went. And he corrected his mistake in the semi finals doing 8.30.

Gerd was eliminated by Frederik Schack, but was delighted with his new personal best. Caspari is very confident for and looking forward to the last race of the season, where we can expect similar track conditions.

Christian Bruhn was probably for the last time on his Honda at Hockenheim, as he is the new owner of the blown ex-Heezen bike that Harry van Schie raced for many years. Christian skipped the first round, and qualified #12 on friday evening. 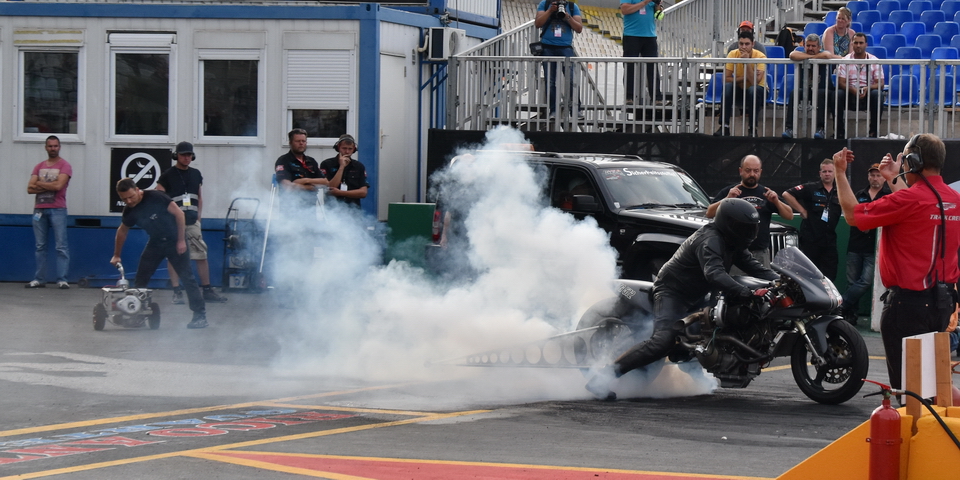 The Honda is still okay, and Christian Bruhn will take it to Mosten.

Jörg Lymant on his new bike for his second race, and a little improvement. 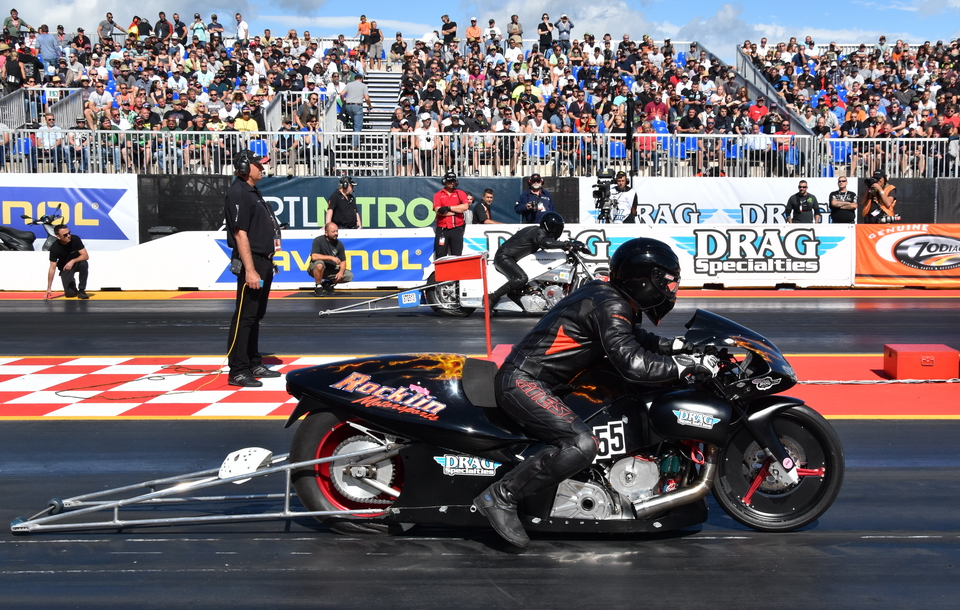 Jörg qualified #7 and was beaten by Cord Albers in round one on Sunday.

Olaf Menzi left the startline before the tree was activated in round one. In round two he pulled his handlebar to the right while he was leaning to the left in an attempt to keep the bike going straight. 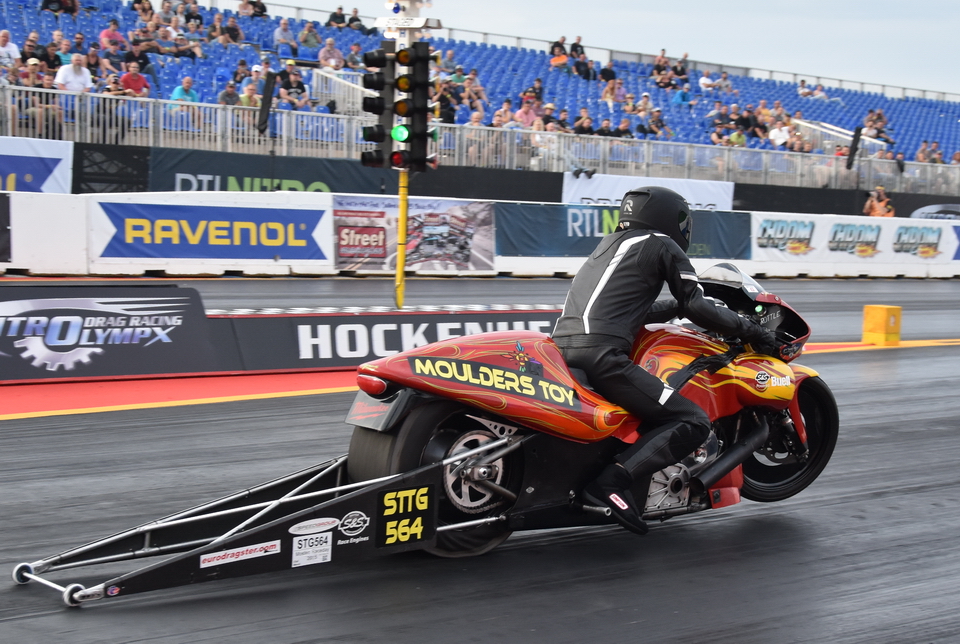 And went towards the guard rail at the touchdown, then off throttle and a 9.3 and place #10 on the list.

Markus Müller skipped the first round and was not able to make a pass during the second round. 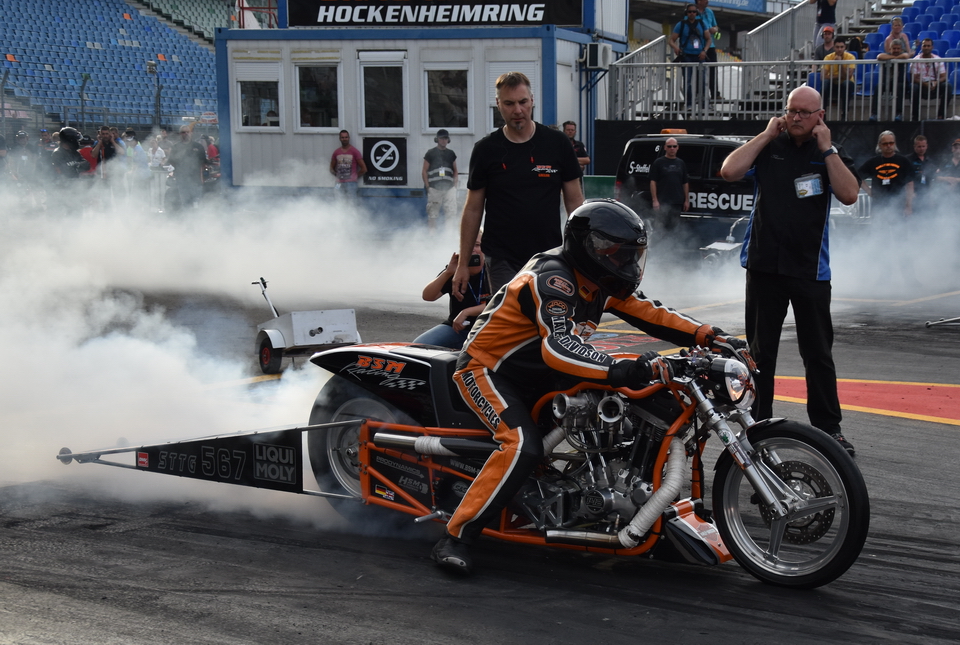 It rained on saturday, so no more chances to qualify. 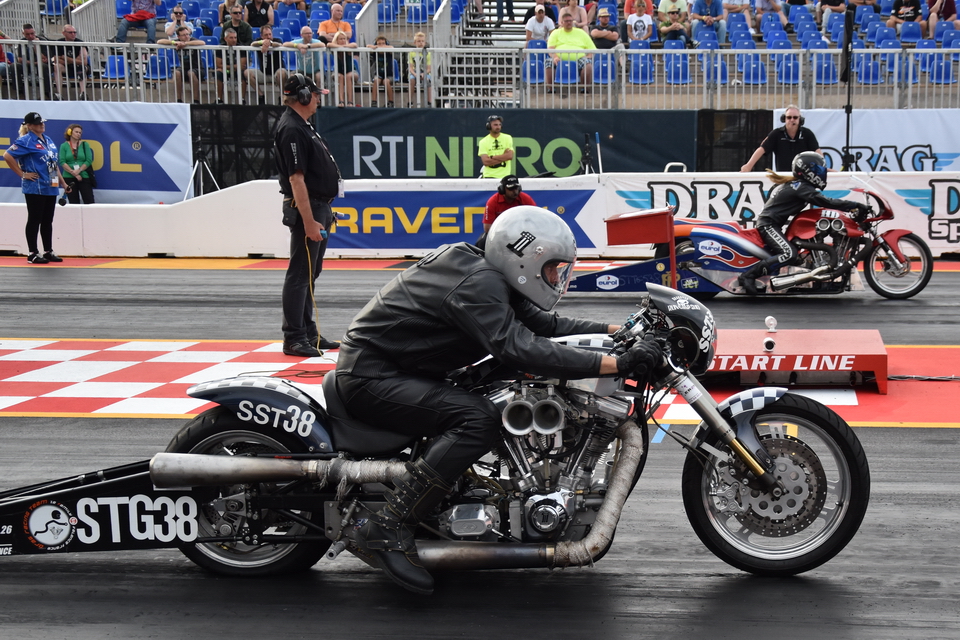 Joël was first alternate for the eight-field eliminatios, but all the qualified bikes started without any problems, so no racing on sunday for him.

Dirk Waterschoot of tem Lucky Dice had damaged the cranck at the last race. Dirk qualified #15 and could not do better then at Drachten during his first attempt. Electrical failures stopped Dirk in round two, and he think the same problem held him back during the first round. 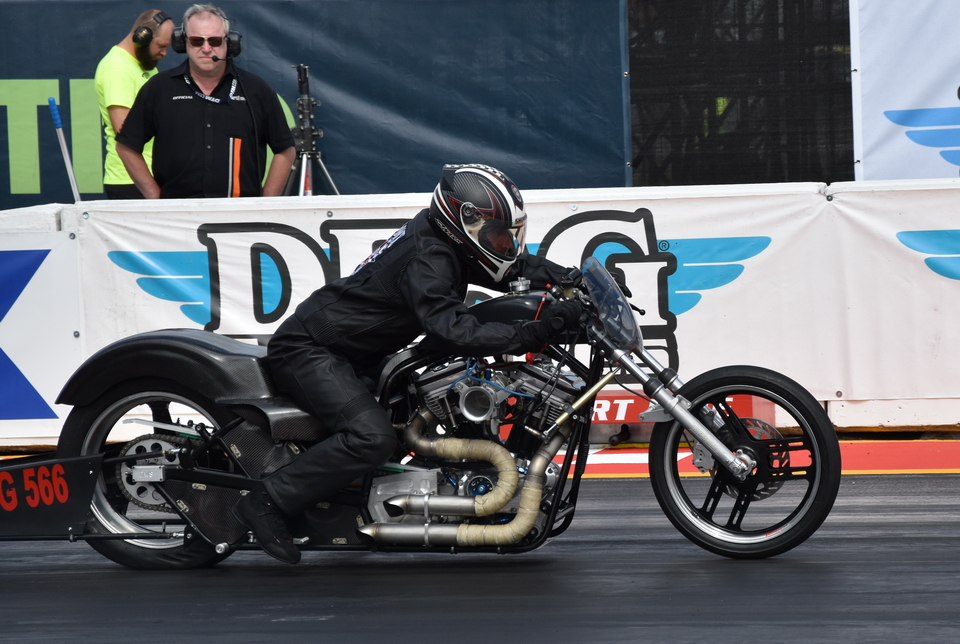 He will find that out at his next date, at Drachten, mid september.

Martin Bueller had been wrenching for two years at the ex-Otto Bauer bike and was first in line. 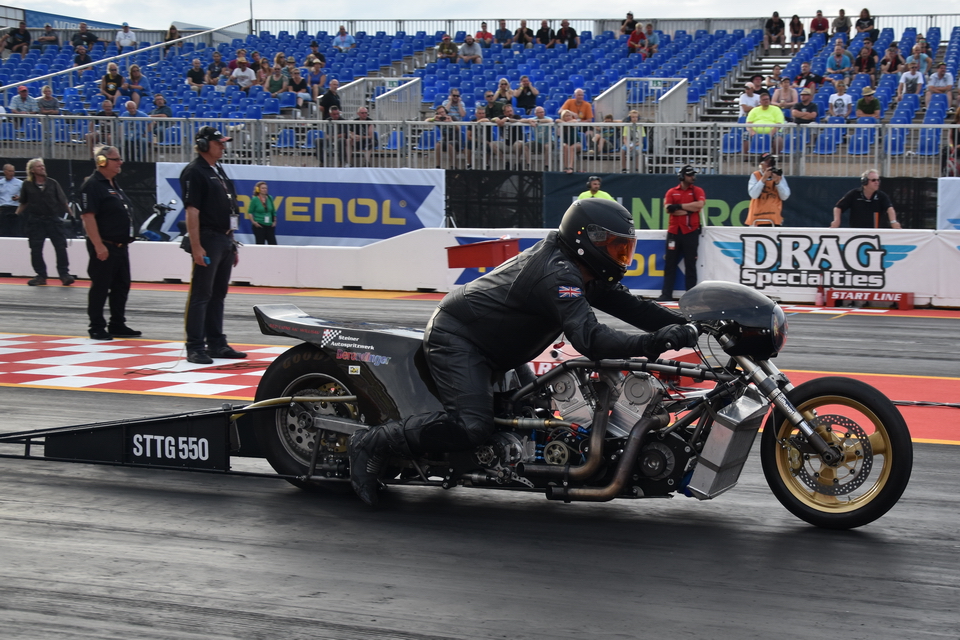 Martin had problems shifting and broke the blower belt in the first round, and still could not shift in the second round. Martin was not able to do better then last year at Hockenheim. But he's on the entree list for Mosten.

Team Shark Attack of Tonnie and Yvana van den Berg had already been testing the previous weekend, and Yvana made huge burnout's with the Kras-Buell. 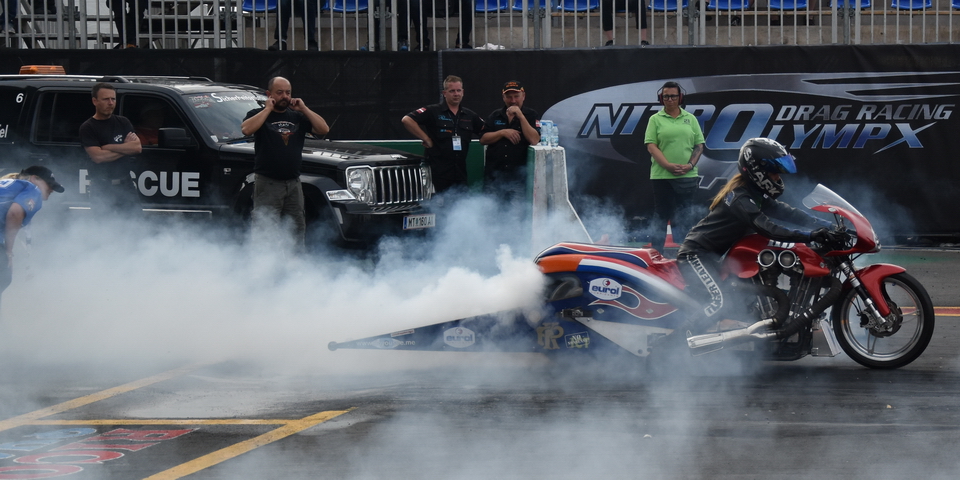 Tonnie was racing the Suzuki and qualified #14 and Yvana landed on the bottom of the list after the qualifications. 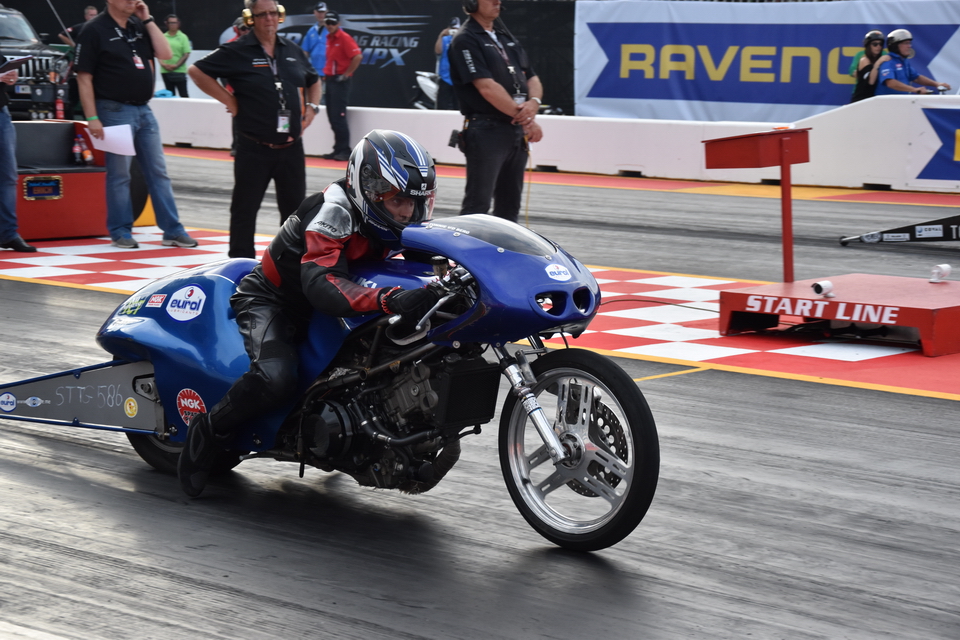 Only an 8-field on sunday, so they were not in the race, but had a fantastic day, while Rene van den Berg did a great new personal best and won the race in the Top Fuel Bike class.

Lars "Birch" Andersen and Herman Jolink were both on place #2 in the championship before Hockenheim. Team "Bohn and Birch" arrived on thursday evening, but they were race ready the next morning and made a pass while Herman Jolink was still unpacking. 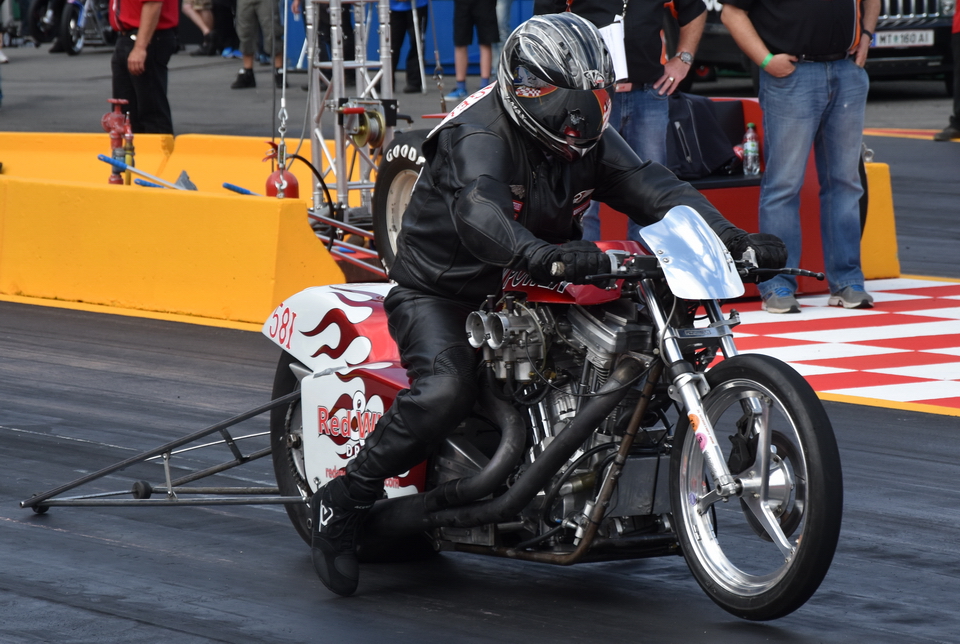 Birch suffered various problems (broken starter, burned plugs, tooth ache) during the weekend and was not able to improve during his second attempt. It rained on saturday, and Birch was not in the eight-field eliminations on sunday. But the damage for Birch was controled by Serge Pinet, who took out Herman Jolink in the quarter finals. So his mission remains the same: Beat Jolink! Birch needs to do one place better then Herman at the overall result list of the sprint race at Mosten, Denmark, then they are equal again on place #2, and he needs to do two places better to push Herman down to the third place. Good luck Birch!

Herman Jolink managed to qualify at place #7 during the one and only chance he got on friday evening, but was not happy with his engine, and relaced it for his spare Ducati engine during the night. On sunday morning all looked bright and sunny for Herman, untill Serge Pinet fully opened the throttle. 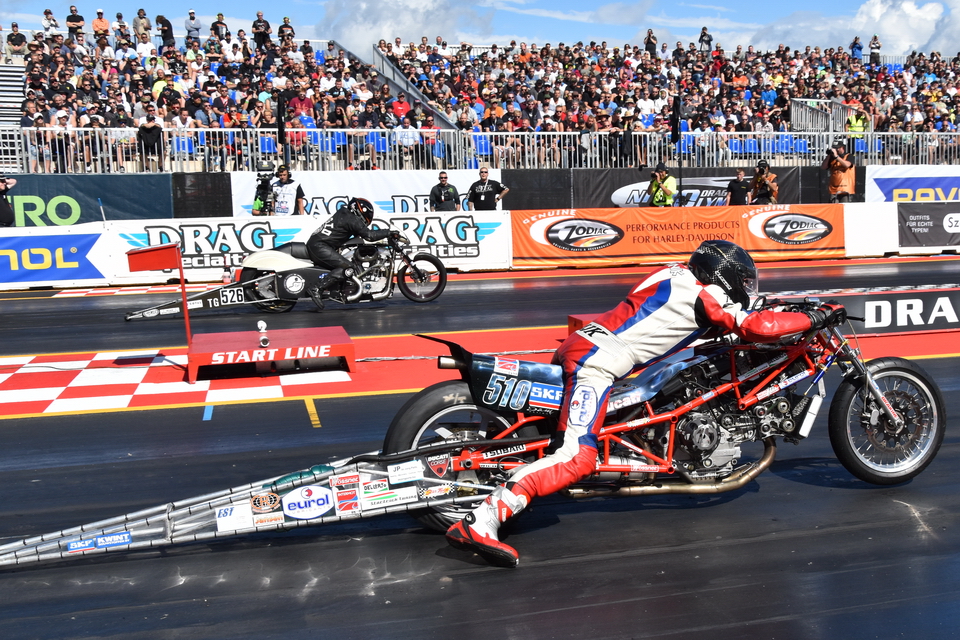 By qualifying a few places better then Lars Birch Andersen, Jolink is alone on place #2 in the championship now, but will have a tough job at Mosten to defend it. 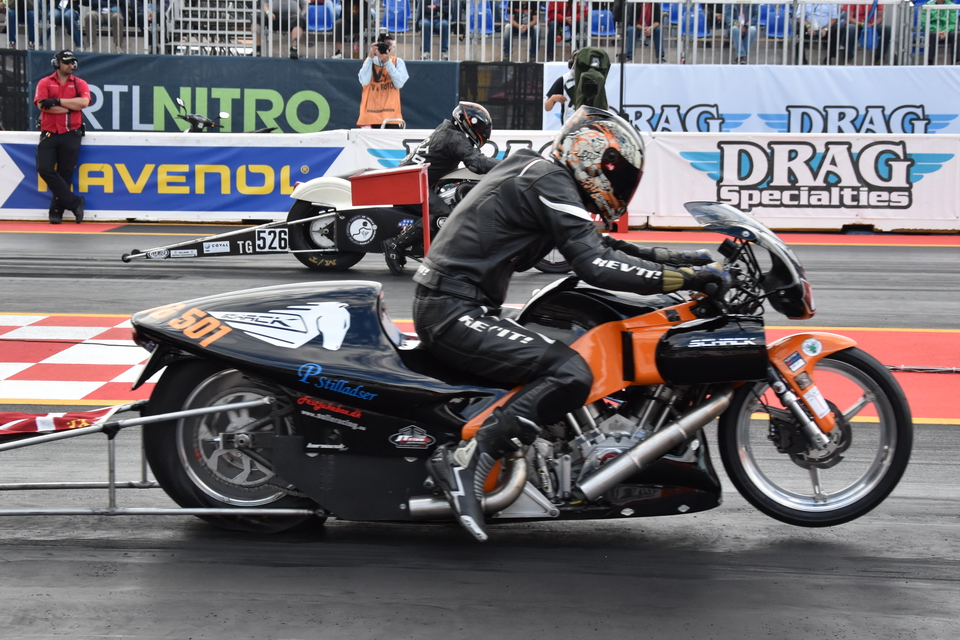 After winning in Hockenheim, nobody can pass Schack anymore, with one more race to go.

Frederik is the first rider to win the euroserie four times in a row! (pointlist here...)

Many thanks to Jerry and the crew at at Hockenheim for making it a great event.

There are about 25 topgassers on the entree list of Mosten Raceday.