The Main Event at Drachten in the Netherlands 22-24-july by Quartermile and Esla. 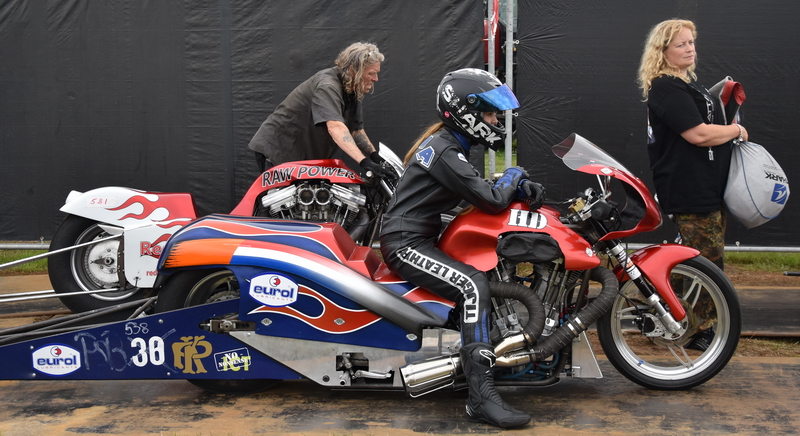 This year a dragrace at the small airfield was three times on the calender of the Euroserie, but the first two were cancelled because heavy rainfall made it impossible to use the field around the airstrip.
It was a bit cold and cloudy on friday morning, but the sun came out in the afternoon and the weather was good all weekend. 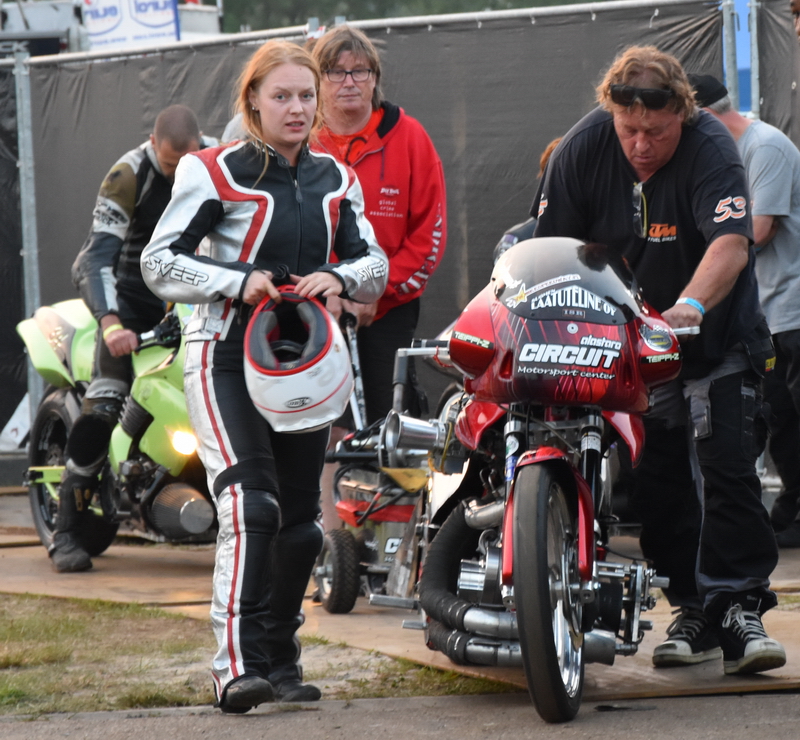 Miia-Maria Vepsäläinen's team (above) from Finland had enjoyed a short holyday after the race in CZ, and was looking forward to the much needed track time during the three day event. Jan Malmberg had the same plans, but damaged a piston after a string of "sevens" and a new personal best at the last race. Malmberg will skip Hockenheim and will try to make it to Mosten racedays.

Jörg Lymant was racing his new toy at Drachten for the first time, a G2-Buell as good as new from the USA. 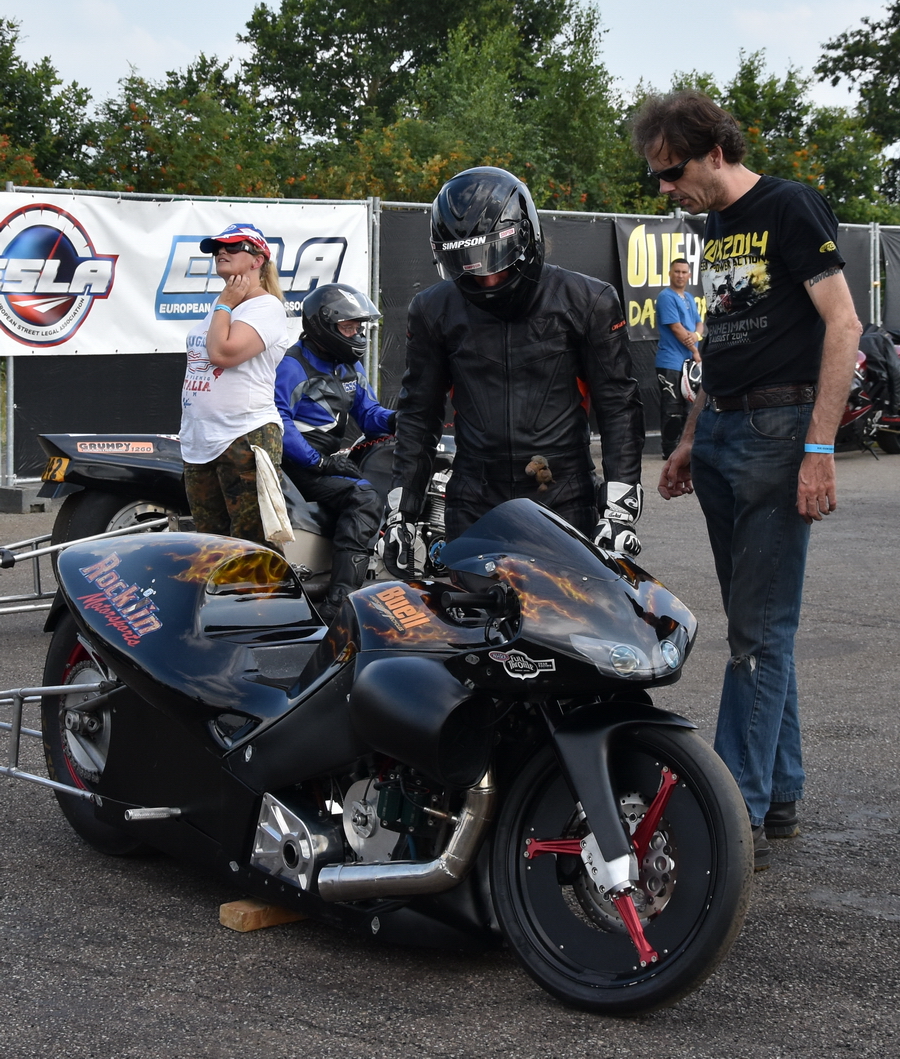 Dirk Waterschoot had already been testing his bike at an ESLA-event in France, and competed for the first time in a Euroserie race. Dirk and his team got help from Jaap "Full Throttle" Duijn.

Chris van Nimmen had suffered many problems with his bike last year, but he had worked hard to solve them all and was very eager to race his twincam powered "American Lifestyle" dragbike. Chris arrived erly on thursday and was camping at his usual spot in the pits.

Marc van den Boer made a lot of noise on friday with his homemade supercharged bike.

But he could not find the proper set-up, and decided on friday evening to do a test run on methanol.

Patrick Kras had broken his leg last month and had to watch the action from the side line. 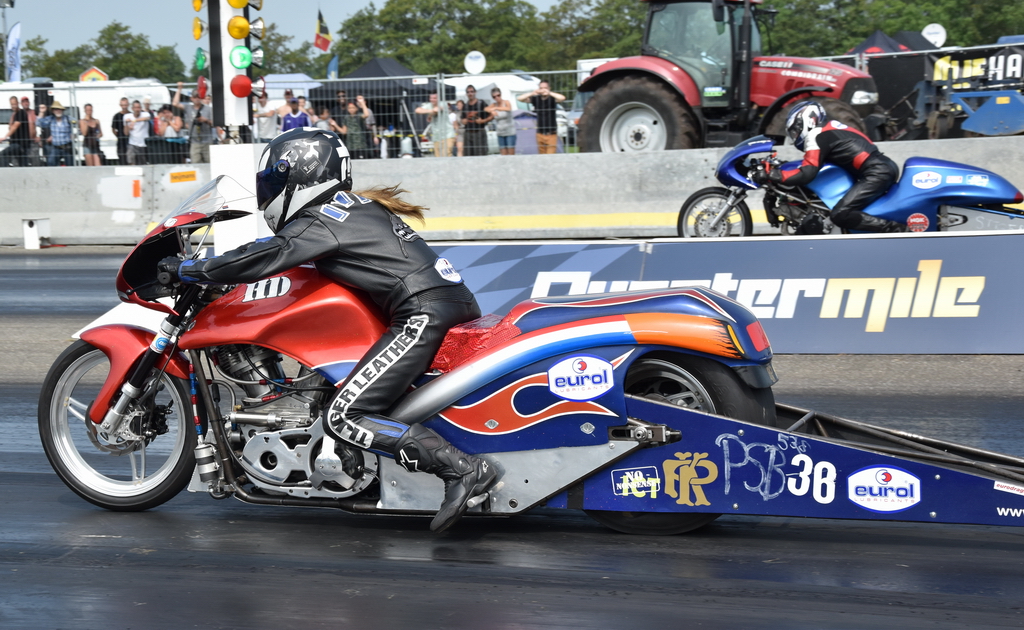 And they used all the available track time during the weekend. Tonnie was the first topgasser to run, followed by Olaf Menzi from Switserland (picture below), who spent the rest of the day wrenching on his bike and gearbox. 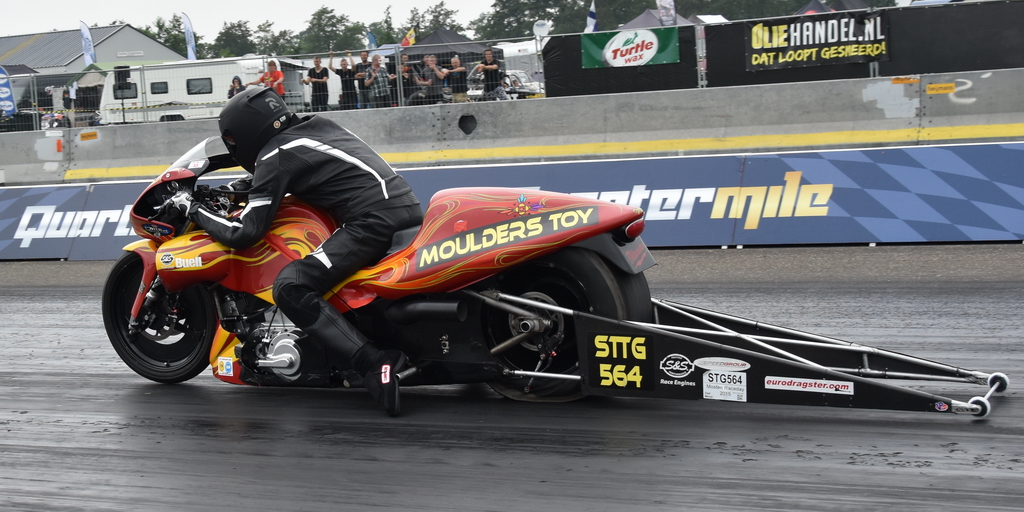 Herman Jolink was in a good mood after doing demonstration runs at the World Ducati Week in Italy, and his victory at the last race.

Jolink and his Ducati were quickest during qualification round one.
Bend Foit's time of 9.2 was the best he did all weekend. 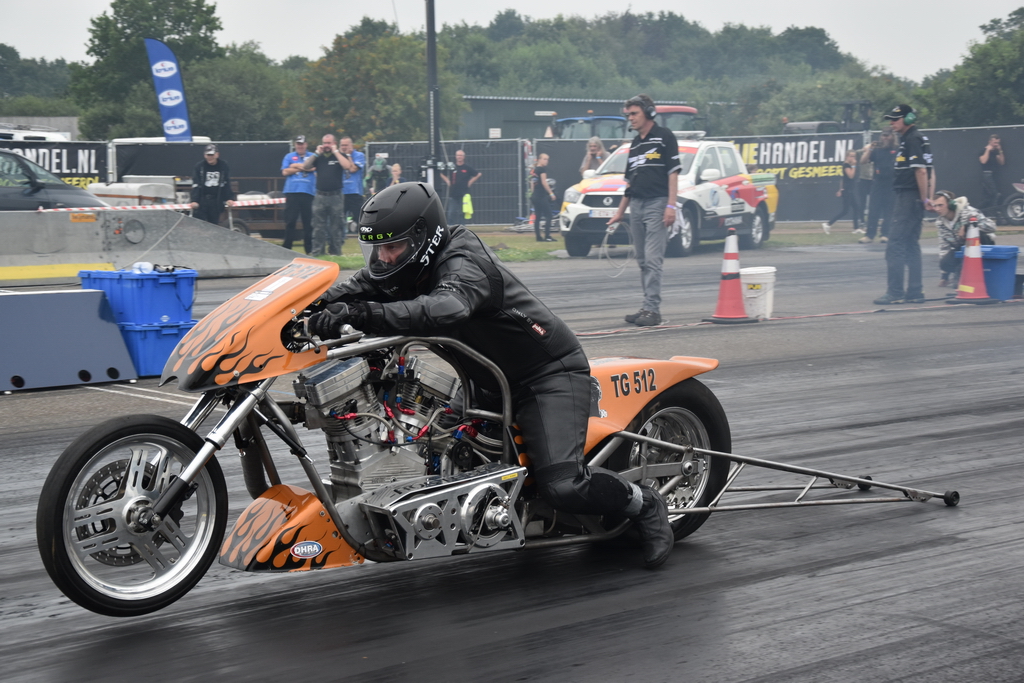 And during his second attempt he did an 8.8.

Same story as for Foit, Dirk Watersloot's first try was his best of the weekend. 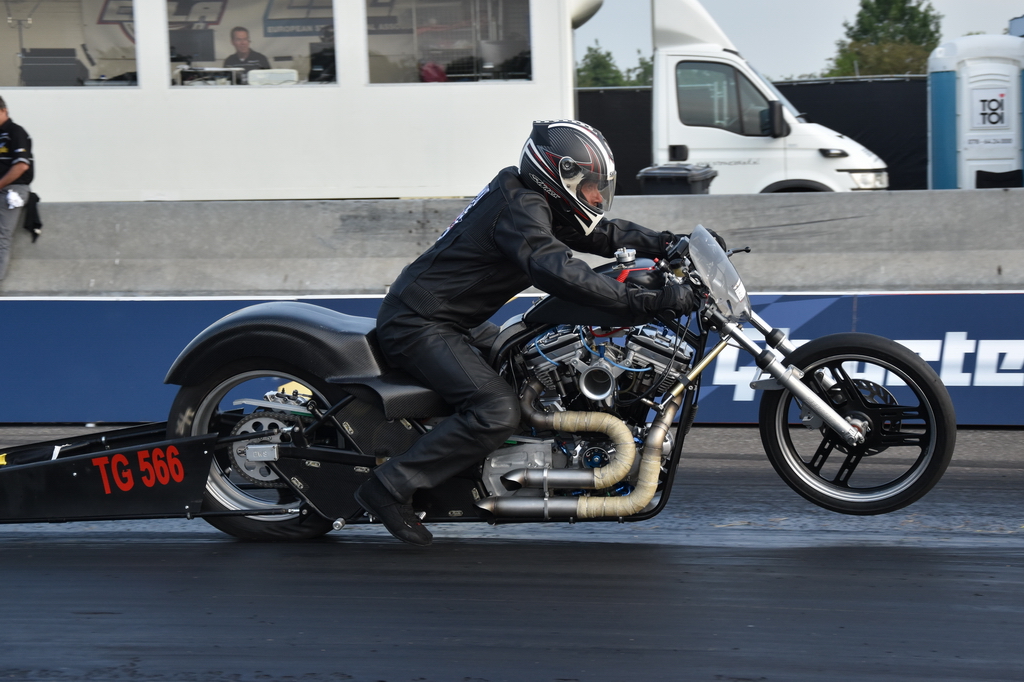 Both teams from Denmark arrived late at Drachten, they had also raced in the CZ the weekend before, and no holyday in between for them but a lot of work and many miles of traveling. Frederik Schack and his bike were race ready before the third session, and his first pass of 7.7 put him on top of the list.

Birch and Bohn arrived in the afternoon, and their first plan was to take it easy for the rest of the day, but they soon found new energy and used an evening session to try and qualify. 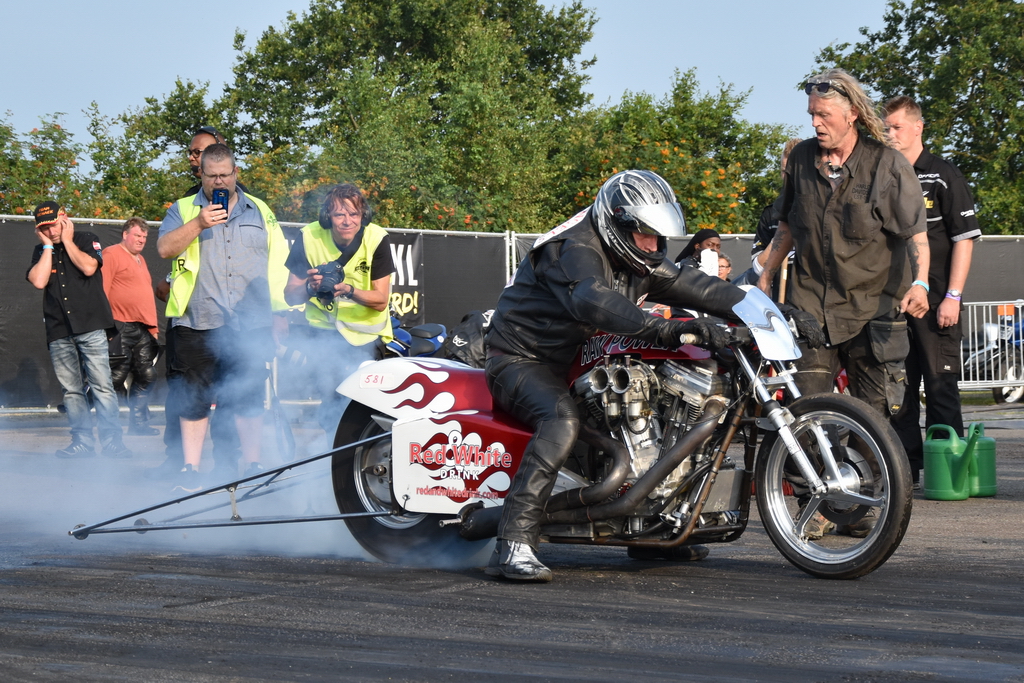 They found an air leak that prevented Birch from shifting, they repaired it and went to bed early.

Miia-maria's first attempt was her best of the day, but she kept trying till the sun went down.

On the last session on friday evening Schack did a great run of 7.5 seconds.

Saturday started cloudy again, but the sun came out when the qualifications started.Only six topgas teams attended the first session of the day. 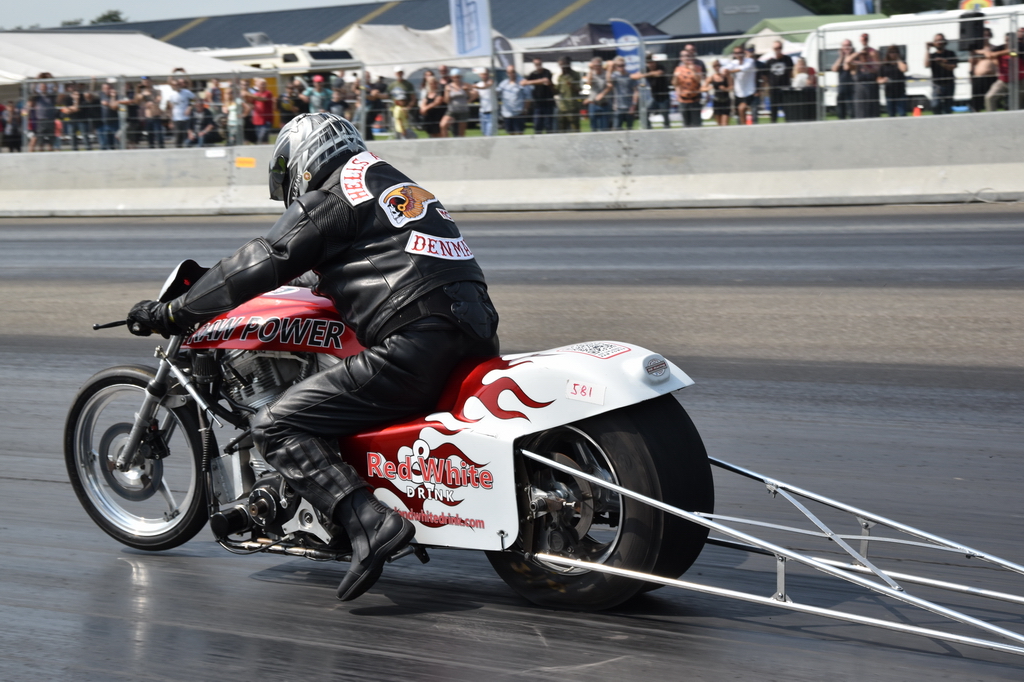 Birch was quickest of that round and jumped to place # 3 on the list.

Chris van Nimmen also improved, passing Lymant, and also a better time for Miia-maria. And a nice pass for Tonnie, close to his first "nine".

Great progress for Yvana on the Buell. 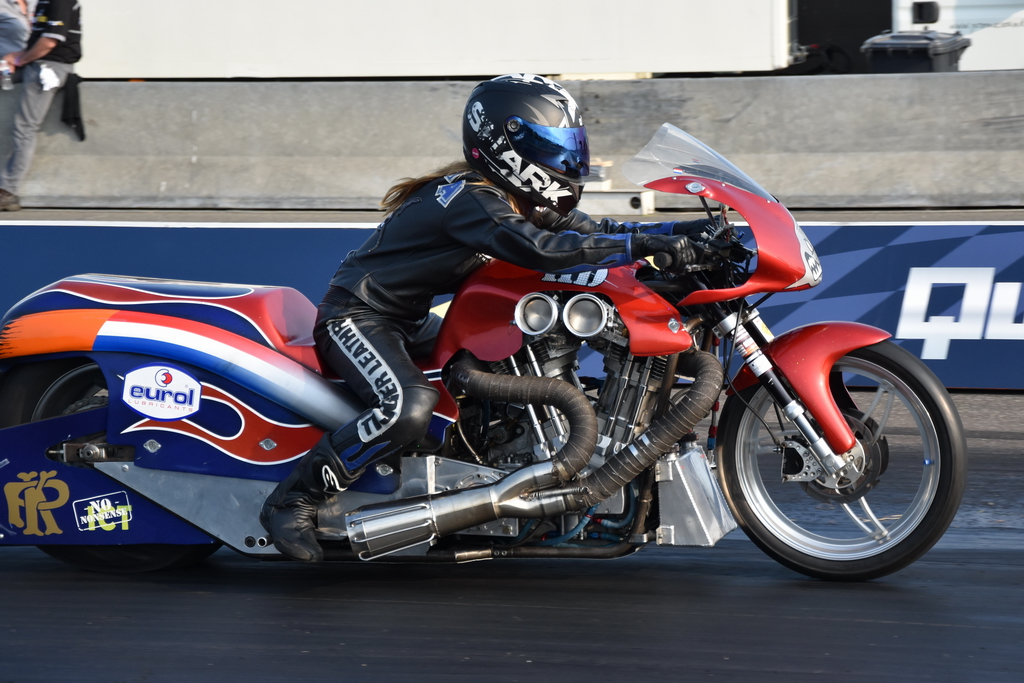 Martin Bueller from Switserland came to watch that day. Martin is on the entree list for Hockenheim where he will race the updated ex-Otto Bauer bike.

Birch was the only one to improve in the last qualification session, but stayed in his place.

Unfortunately no evening sessions on saturday because of a huge oil spill by a car.
During the riders and drivers meeting on saturday evening the plans for sunday were explained: two free training sessions in the morning, and the eliminations would begin at 13:00. 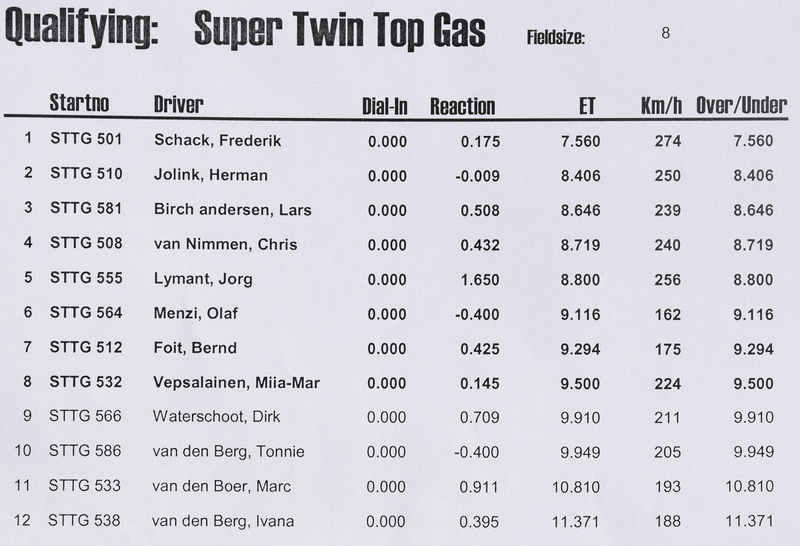 Dirk Waterschoot had suffered damage to bearings of the crack and signed off for the race. Damage to the the front cylinder head for Miia-maria, so she was out too.
So Tonnie van den Berg was sure to race, and Yvana would be the alternate.

Team van Berg helped to clean up the oil spill, and Rene van den Berg made three demo runs on his Topfuel bike during the weekend.

A topgas meeting with a drink and a snack was held in Dirk's tent on saturday evening to say goodbye to team "Full Throttle" of Harry van Schie and Jaap Duijn.
And to hold the postponed prize giving ceremony to give Miia-maria her 2014 award.
And also to say goodbye to Marc van den Boer, who decided to go back to the Funnybike class again, where methanol is allowed.

Both riders of team van den Berg also used the training sessions on sunday to practice their skills, while the other teams waited for the eliminations to begin. Bend Foit did not trust his gearbox, and signed off. Yvana was given the news that she was up against Herman Jolink in the quarter finals.

A lot of time was waisted on sunday, while the traing sessions took much longer then planned. Many of the spectators had already left when the eliminations began.

Tonnie van den Berg was up against top qualifier Frederik Schack in the quarter finals.Tonnie gambled and waited to go in stage untill he was warned by the starter.

Then he made a redlight and a wheely.

Jörg Lymant shut off after burn-out, so Chris van Nimmen got to ride alone. 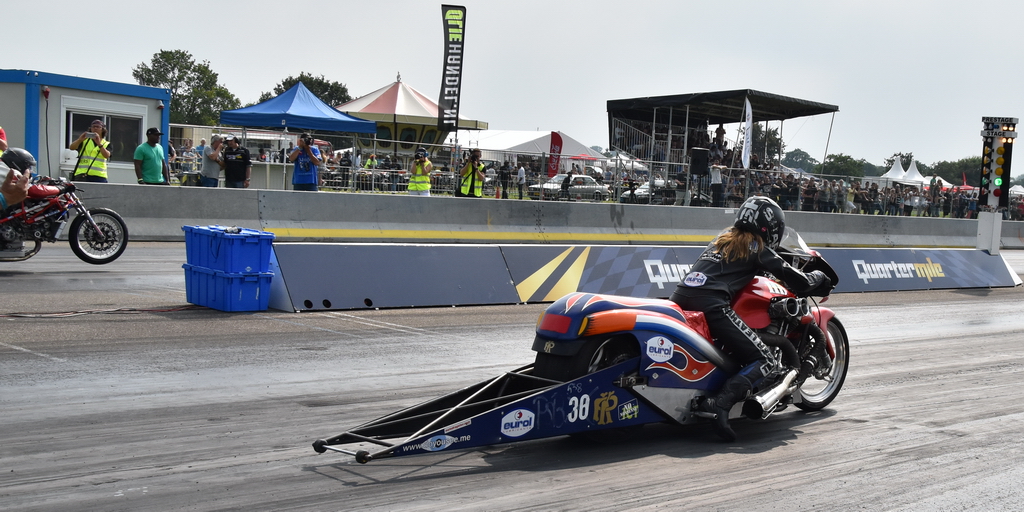 Olaf Menzi did not show up but packed and left, so a free ride for Birch into the semi's. 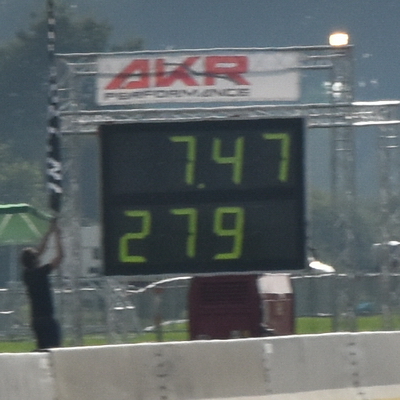 A great new personal best for Schack, quicker then Jesper Thiel, the former owner and present tuner of the bike, ever was on it.

Jolink had a sharp reaction while Birch was slow to respond.
Birch tried hard to close the gap and ran a quicker time, but Jolink managed to pass the finish line just ahead of him.

Frederik had had already practiced his reaction times during the quailfications, but did not take any chances on sunday. 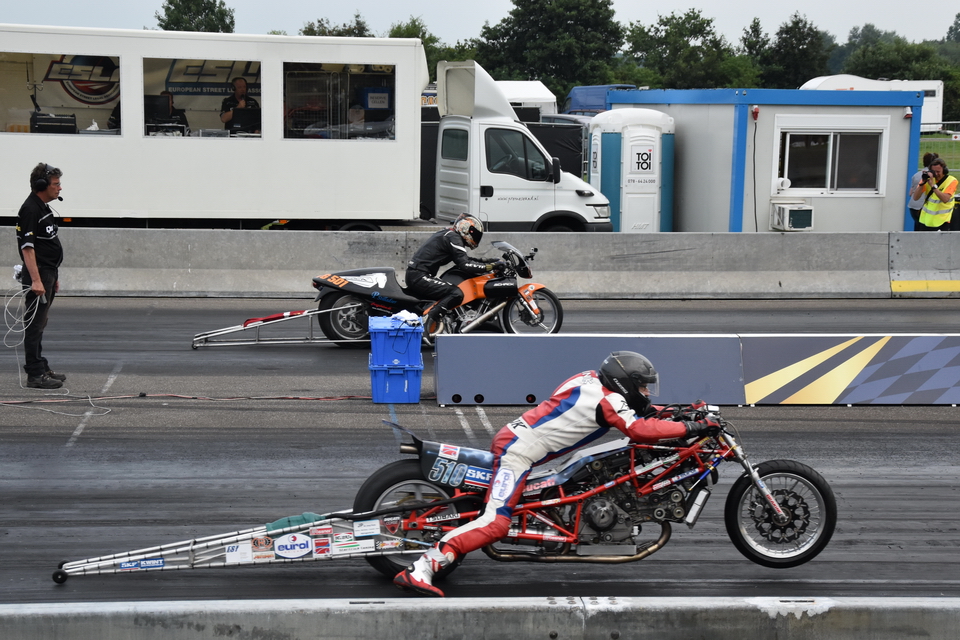 Jolink reacted slightly better, and for about 50 meters both riders were side by side, then the Buell started to pull away, and another 7.47 came on the scoreboard!

It was already getting dark when the class representative took this picture: 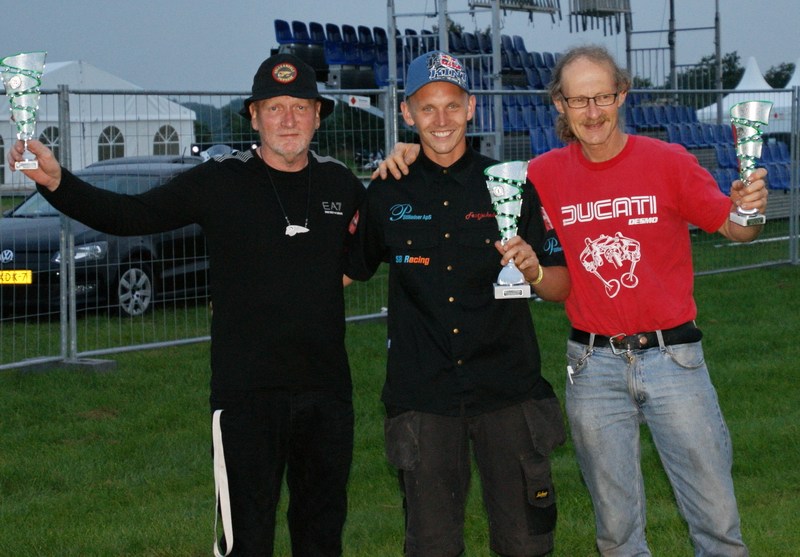 Congratulations to Frederik, Herman and Birch.

With only two races to go, Schack strongly leads the 2016 championship. Jolink and Birch are both on place #2 now, while Cord Albers will attend the last two events, Hockenheim and Mosten. (point list in html)

The blown Harley of team Full Throttle has recently been sold als is now parked near Hamburg. The new owner of the bike will race it next year, he's on the entree lists for the last two races of the season with his turbocharged Honda. Good luck with it, Christian!

The latest results of the racers have been updated in the European drag database.