Weather predictions were not looking good, but the track was dry on friday evening, so the racers got some time to test and tune. A lot of effort was put in by organisers MSTO and Predators to create the best possible conditions for quarter mile dragracing.

The weather held on saturday and three round of qualifications were held. Miia-Maria and her team had travelled all the way from Finland. Her plan was to also attend a race at Drachten in Holland, one week earlier, but that got cancelled when the team was already on the ferry.

The race at Bechyne was the debut of Markus Mueller (picture below). After crewing for Funny Bike racer Thomas Joswig for many years, Markus now has his own bike, formerly owned by Simon Lewis. 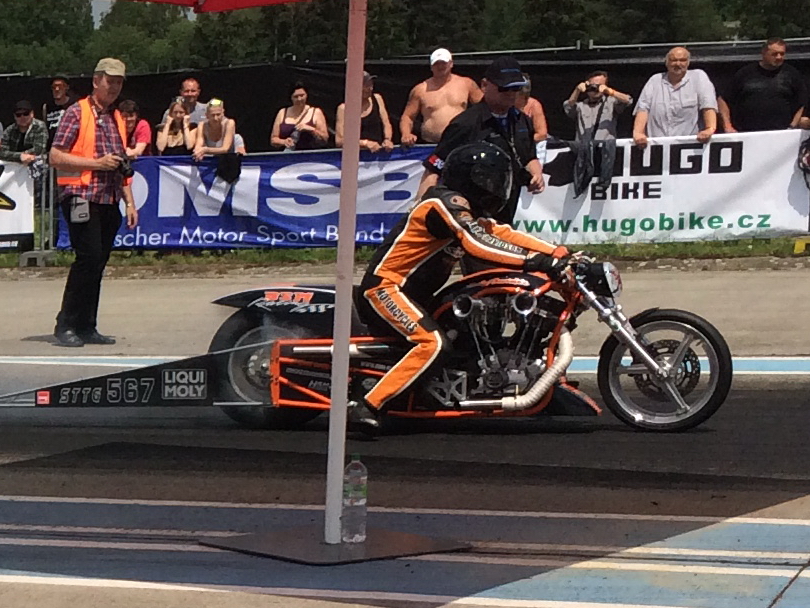 Christian Bruhn took his Honda in the line-up, but noticed a water leak.

An upset after round one: not champion Frederik Schack but Cord Albers on top of the list!

Place #3 on the list is not Mr Westin, but Gerd Caspari on his Alu-Buell (picture below). Albers and Caspari were assisted in the pits and at the start line by Bernd Niessen who has also been racing Gerd's bike. 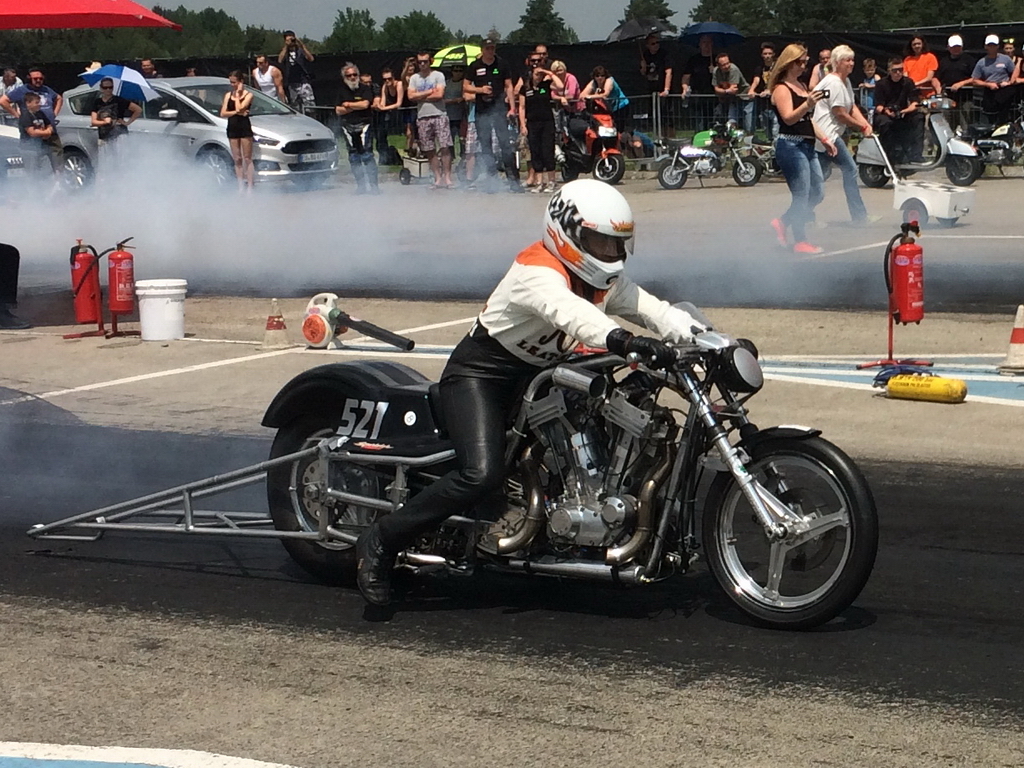 Lars Birch Andersen (below) slightly improved in round two but was unable to pass Gerd Caspari. 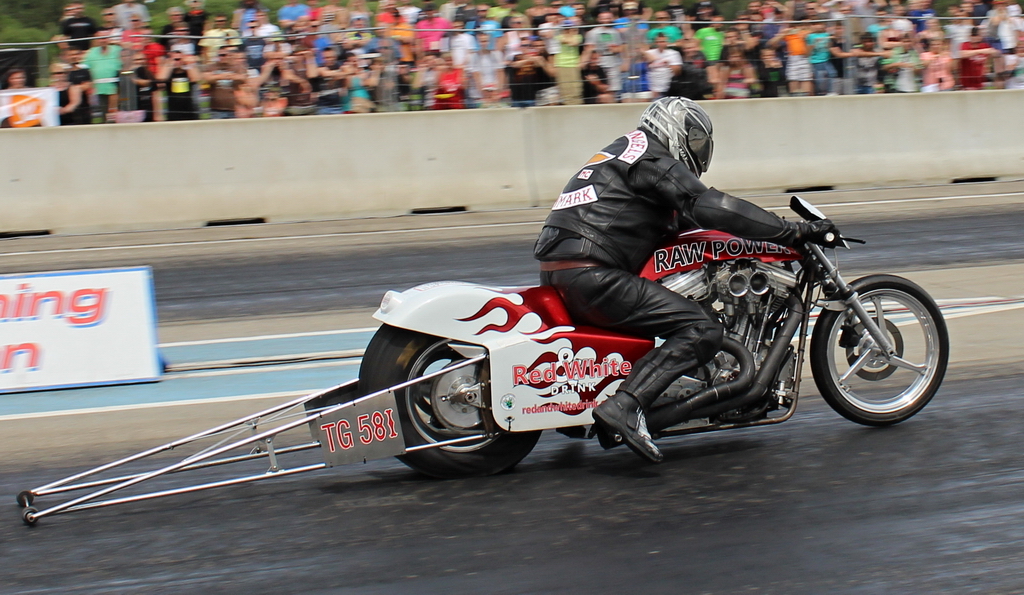 A fantastic run by Cord Albers in round two, very close to his personal best time that he did last year at Hockenheim, and a new personal best speed of 282 kmh! 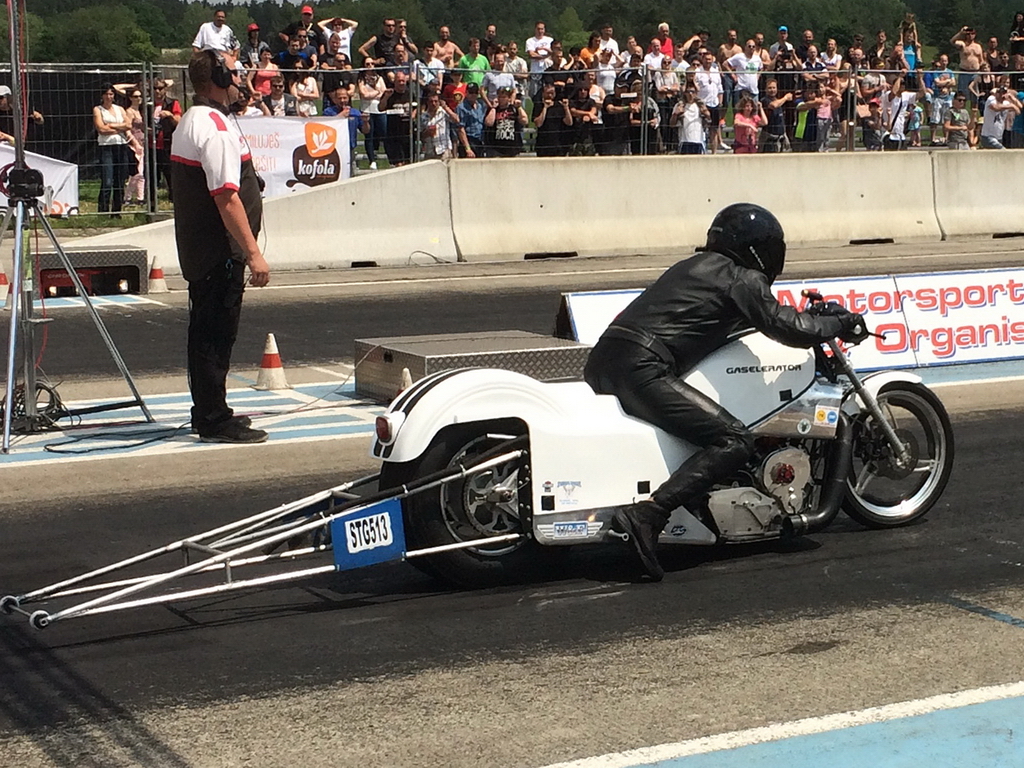 Schack also improved but stayed in place #2. And still severe problems for Miia-Maria Vepsalainen (below). 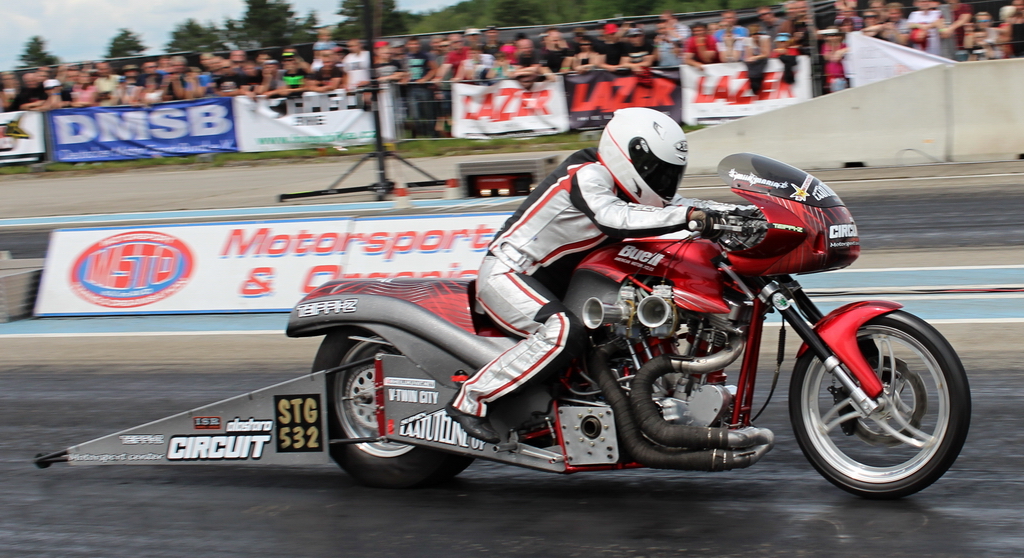 Christian Bruhn was stopped during the burn-out for leaking water. And after a repair in the pits, the engine jammed during checking it and revving it up. So Christian was not able to qualify.

Markus Mueller was the only one who improved in round three, 10.6, but the ranking stayed the same, resulting in this flow chart: 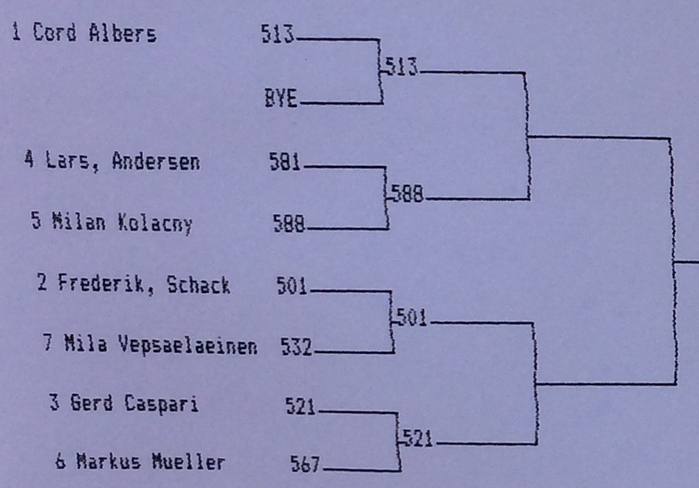 On sunday seven topgassers lined up for the quarter finals. 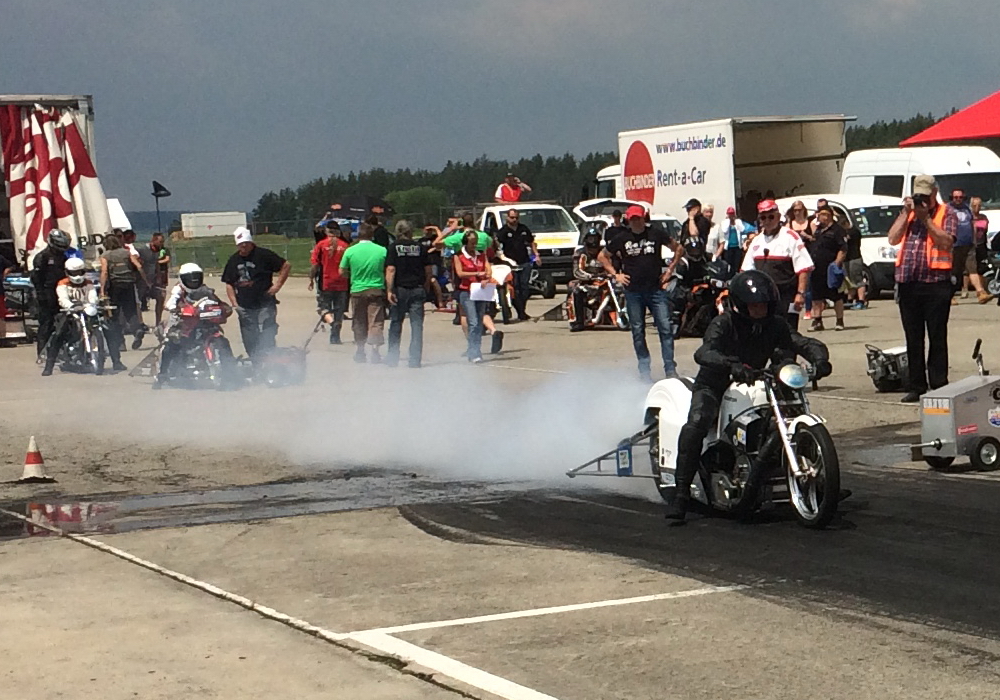 Cord had a bye-run, so easily advanced to the semi's, but his motor stopped after 300 meters...

Schack made a pass while Miia-Maria had problems and was unable to race. 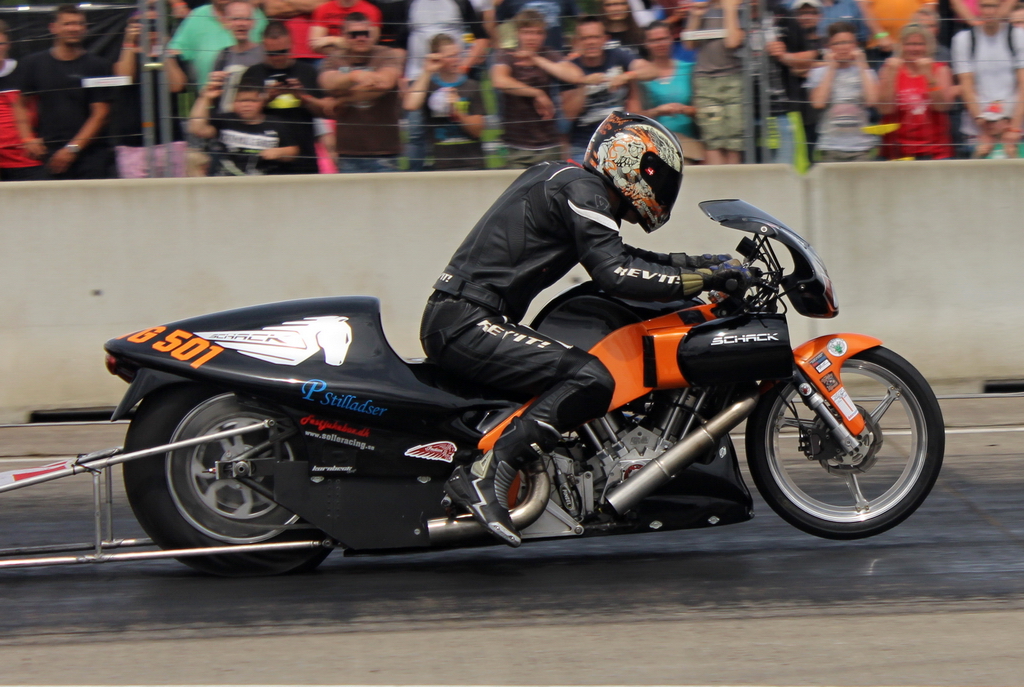 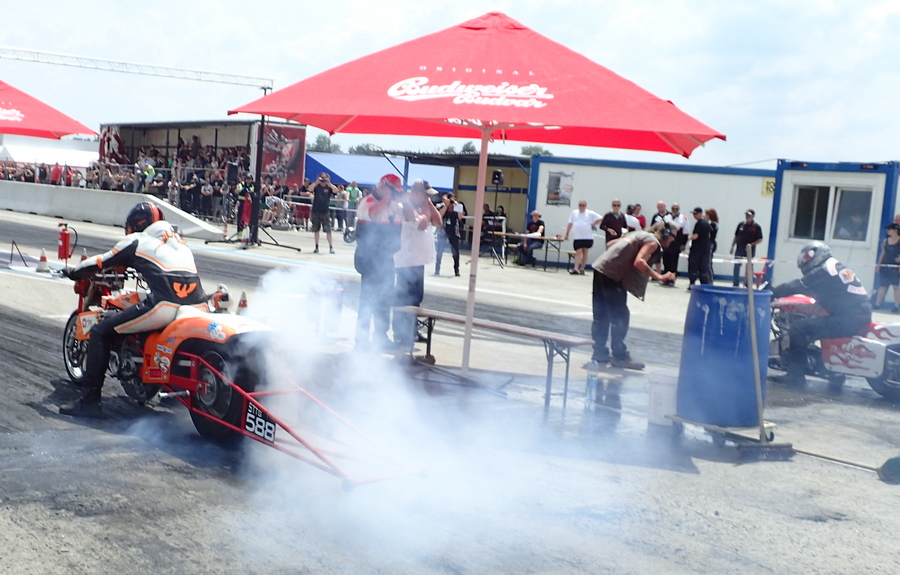 While Milan made his burnout, Birch's engine failed to start, so Kolacny advanced to the next round.

Back in the pits, the bike of Bohn And Birch fired up without a problem, so they fear a human error was the cause.

Albers found a damaged rotor of the cranck-position-sensor and was unable to repair it in the pits. So he did not show up for the semi finals and Kolacny advanced easily again. Schack beat Caspari in the semi's and went to capture Milan Kolacny in the final round after a slow start.

Albers showed he and his bike are capable of giving good competition, but team Schack extended their lead in the championship. They are now 450 points ahead of the #2 on the list, Birch, who is being chased by Kolacny and Albers.

Thanks to Peter Niklas, Yvona Kneblova and team Kolacny for the above pictures. See you at the next race.