We only raced airfields, this season, and the last race was no exeption. A former military one, with an excelent dragstrip and lots of space in the pits. We arrived late on thursday night, and had some rain on the way near the track, and weather predictions looked bad. But we were lucky, and no time was wasted, because there were four qualification sessions held on friday afternoon. Merse, Brüschi, Heinze and Marz arrived later, but everybody had five more chances on saturday, and the sun was out all day. Harry van Schie used all nine rounds to go full throttle and clock a 9.2 and bunch of 9.3's, but when it came down to dragracing on sunday, his motor broke when he prepared for the 1/8 finals!

Wolla did a personal best of 9,78 on friday, Herman Jolink took his numbers down to 8.732, and on saturday Roman Sixta did an incredible 8.696 on his supercharged Honda, good enough for the #2 spot on the list.Andre Stefan from Sweden was the big man of the weekend, he set an 8.2 and 253 kmh and did a series of clean straight runs with his 60 degree S&S prostock engine powered dragbike. 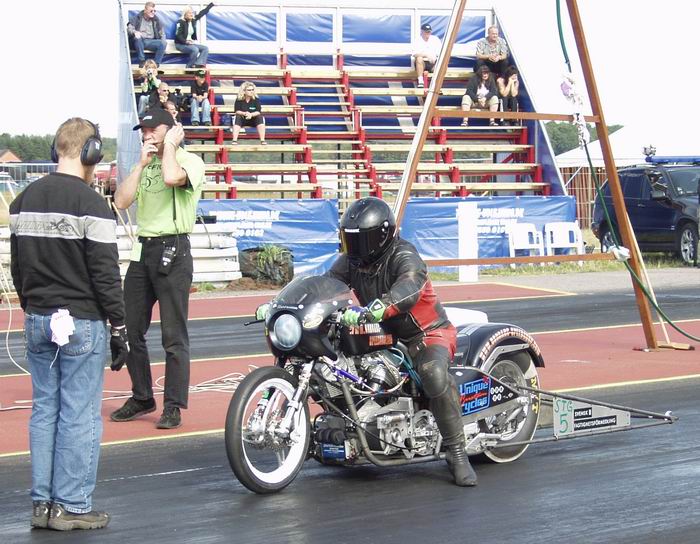 Anna-lena Asplund races the blue bike that belonged to Danne Asander now. But it broke on friday, they packed the big yellow bus and left early, making room for Weimar's service truck. Old memories came back when I saw Jesper Thiel Jensen's bike. Due Ulholm raced it years ago in our class. 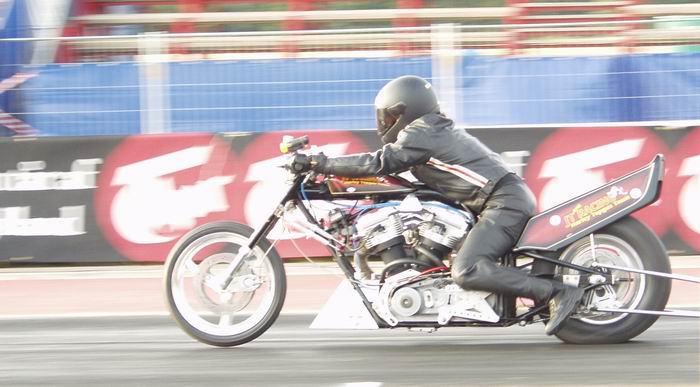 Jörg Lymand was the busy boy, he raced his blown topgas bike, and also entered the pro street harley class with his modyfied bike, doing big wheelies. Axel Seifert did not get the competition we hoped for, because Otto Bauer did not show up! By qualifying third, Axel had allready picked up enough points on saturday evening to grab the championship. Otto had not been able to repair his gearbox in time, and neither did Frank Heitmann. Bauer's abcense also opened the door for the second place to Herman Jolink. The 25 points he (and Heinze) got for speed, and his fourth place in qualifications were a good step in that direction. Herman now needed to win two rounds on sunday to pass Otto. After a little confusion, the proper flowchart for a 16-field with fourteen racers was produced. 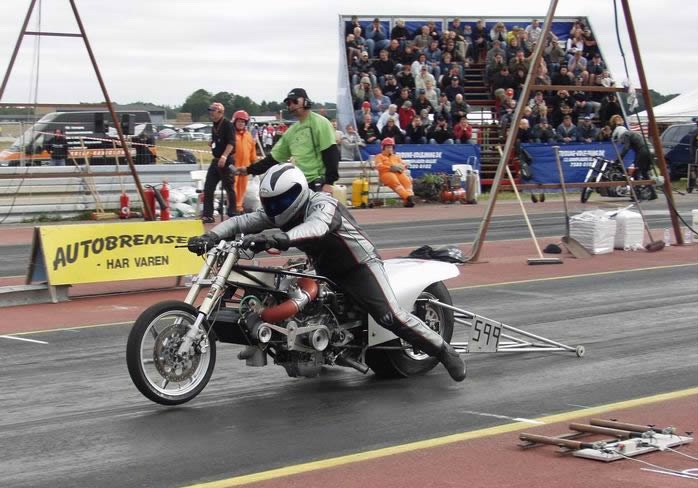 The sky was very bright, with lots of stars visible, that night. Next morning there were a lot of dark clouds coming in, but racing started early, and it got better throughout the day. But not for Wolla, Van Schie, Marz, and Koch. They could pack after the 1/8 finals. In the quarter finals, Kay-thomas Heinze was up against Herman Jolink. Heinze made Herman's day, by drawing a red light, much to Jolink's supprise! Still, Heize was happy with his 8.617 seconds, and no damage to the bike this time. Sixta, Seifert, and Stefan had also made it into the semi finals. Stefan ran 8.281 and 256 kmh against Jolink who forgot to open the throttle in time.

Axel was the only one who could still help Bauer by taking the speed points, but didn't manage to do so. With 8.69@244kmh he sent Sixta home, and lost with 8.754 in the finals. Andre Stefan won the event needing only 8.396 seconds doing 254 kmh. 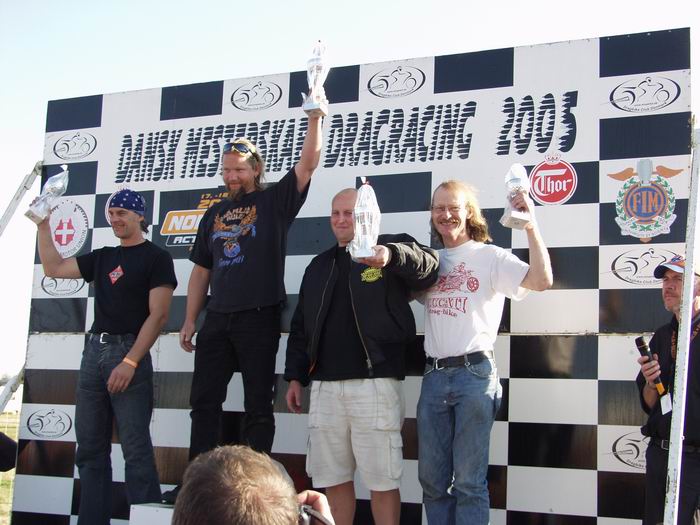 Points were counted, lists were made, and Axel is the champion for the third time in a row. Harley still rules the class, but we see a Ducati on the second place, a homemade Godden-based engine on number three, and Roman Sixta raced his Honda to the fourth spot so the Milwaukee iron no longer dominates.
Many congratulations to Axel Seifert and his crewchief Ines. And also to rooky of the year Roman Sixta.

Many thanks to the people in Denmark for organising a great event, and we love to come back to Vandel next year. Pictures of the event can be found here. See you all in Gesher!

Report of the sixth race here