The first race of the euroserie 2005 took place in Drachten, Friesland, and 20 riders showed up and tried to qualify for a 16 field dragrace on the well prepared track. Some had a very long journey, like Roman Sixta, and even our old champ Ricardo Giliberto came over from Italy. So it was realy a pity that the weather spoiled most of the fun. On saturday everybody had only one shot at it, before the rain came, and Gerd Caspari did that the best. Realising that it might be the only chance to qualify, he did not change the fast setup that he used during test and tune, and clocked a 5.41 with 207 Kmh topspeed on the 1/8 mile. Impressive was the performance of Mike Brusch: 5.8 seconds, a personal best on his new bike, and that put him im the third spot. He dropped to the #4 spot after sunday mornig second round of qualification . Axel jumped to the second place with a 5.47 after burning his clutch on saturday and Heinze was third with a 5.7.

Frank Heitmann was not so fortunate. He bought Gunther Sohn's topgas bike, but did not qualify. His launch was very impressive, but he had mechanical problems. Ricardo had ignition troubles, but managed to race into the #16 spot on sunday with a 7.7, kicking out Sixta and Thierry Bos. 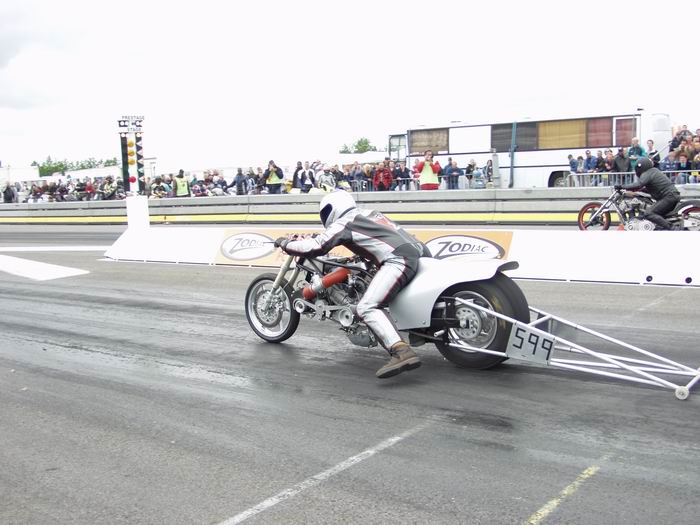 Merse did not manage to make a pass, just like Dutch champion Heezen who damaged the blower. He tried to repair it all night with no result. Lymand went over to meet Ton Pels on saturday night, taking his engine with him. After some Zodiac Merlin magic he shot his blowerbike into the #5 spot. 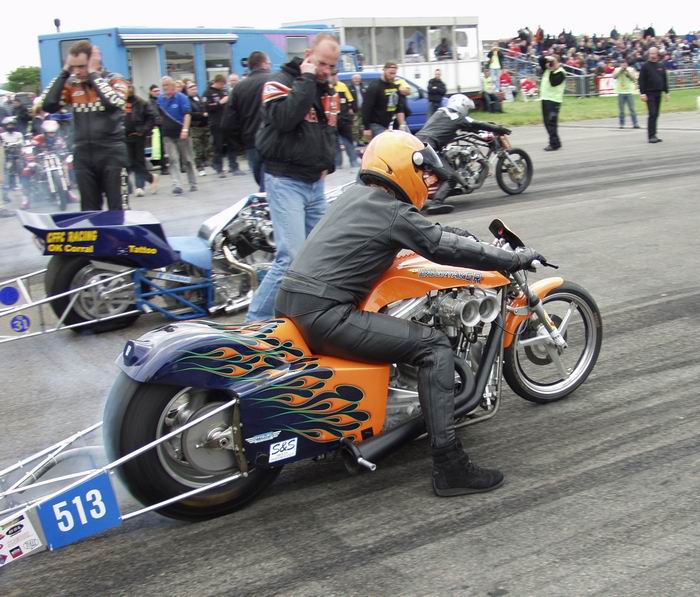 The price for the best flames of the weekend goes to Cord Albers' airbrushed body.Wolla's girlfriend jumped skyhigh after Friedrichs 6.1. He has a Hestec injection fitted now, so beware of the cyborg. Next date next weekend in the Czech republic where we hope for better weather and cleaner toilets. We also hope to meet our old friend Hutla there and see Otto Bauer and his homemade rocket.