Eleven Top Gas riders on the entree list.
Ten showed up. Mats Larsson had stayed at home to work on his gearbox, that still does not function properly.
But Larsson's crewchief had taken the big orange bus and team Malmberg to Malmö to defend the Swedish honour. Below a picture of Jan's double blown "Derringer Big Block" bike.

The weather predictions for saturday were bad, so it was very important to use the two qualification rounds on friday evening.

After a sabatical year, team Full Throttle from Holland is back and ready for combat. And the plan is to attend all remaining races of the euroserie this year. They came well prepaired to Malmö, as they had already been testing at Drachten, solved the last technical problems (with a little help from some friends) , and had fitted a new rear slick. 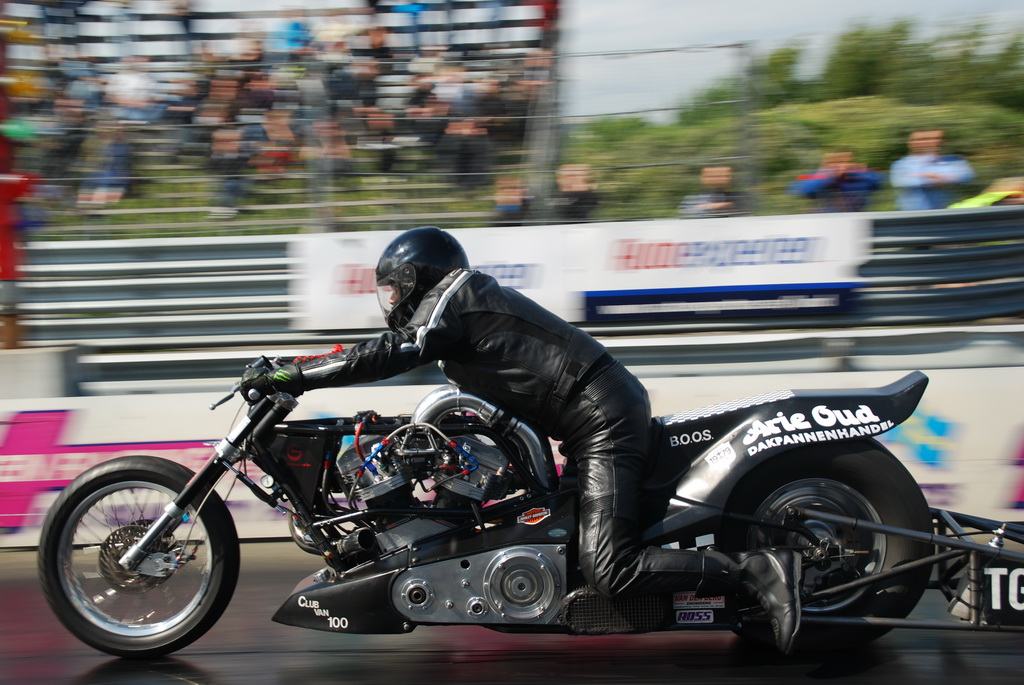 Last time Harry race at Malmö was in 2007 when he crashed at top end. The team considder that as a warnig to alway double check. Harry was first in line and took it easy on his check out pass.

Then a very nice run for Herman Jolink on his homemade Ducati. 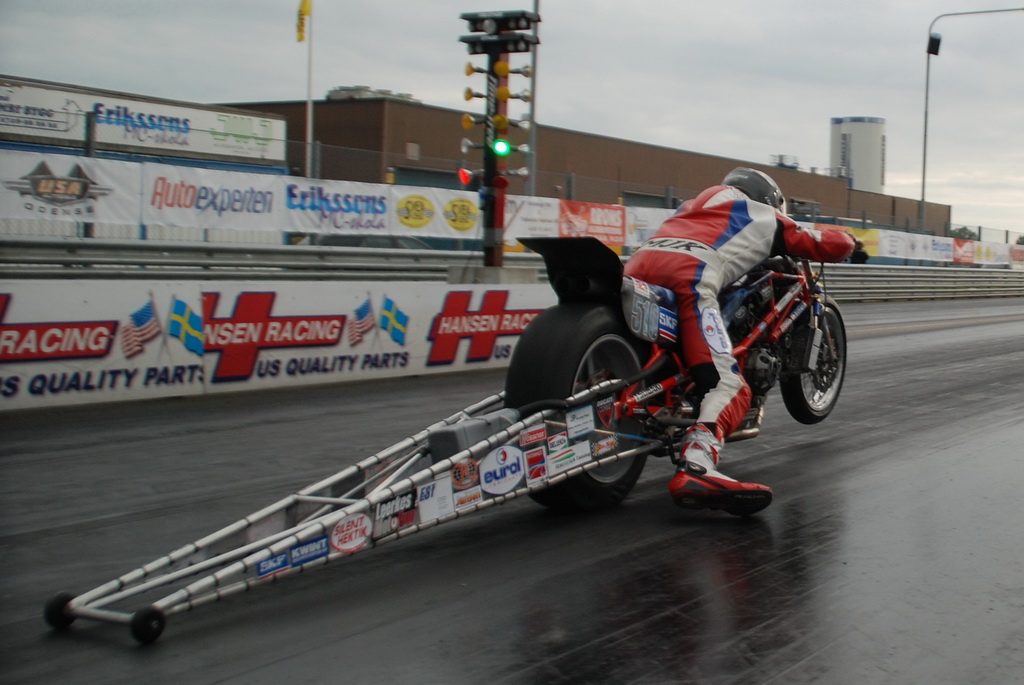 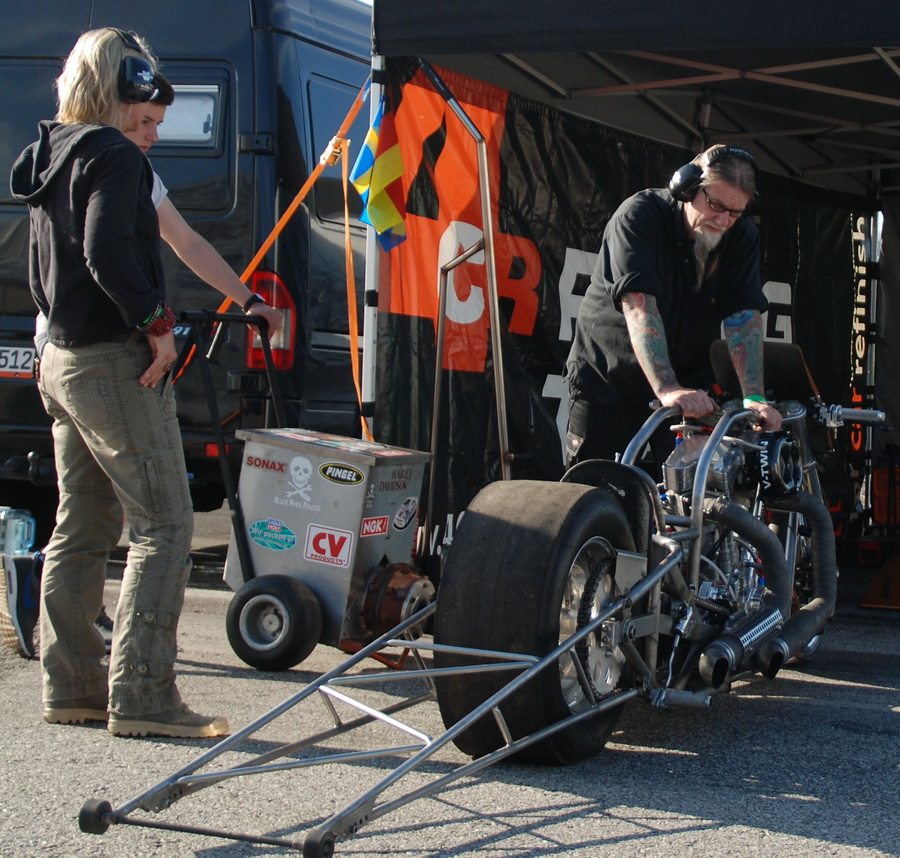 Bend Foit from Germany (above) arrived early at the track and ran against Herman Jolink Bernd's time was good for place #6 at that moment.

Olaf Menzi from Switserland arrived just in time for the riders meeting, but was too tired from the long trip to race that evening.

Peter Niklas was absent during the last race and still needs to do some work on a cylinder head of his new dragbike. But just like last year, Peter used the spare bike of the team, Christian Bruhn's Ducati 999. 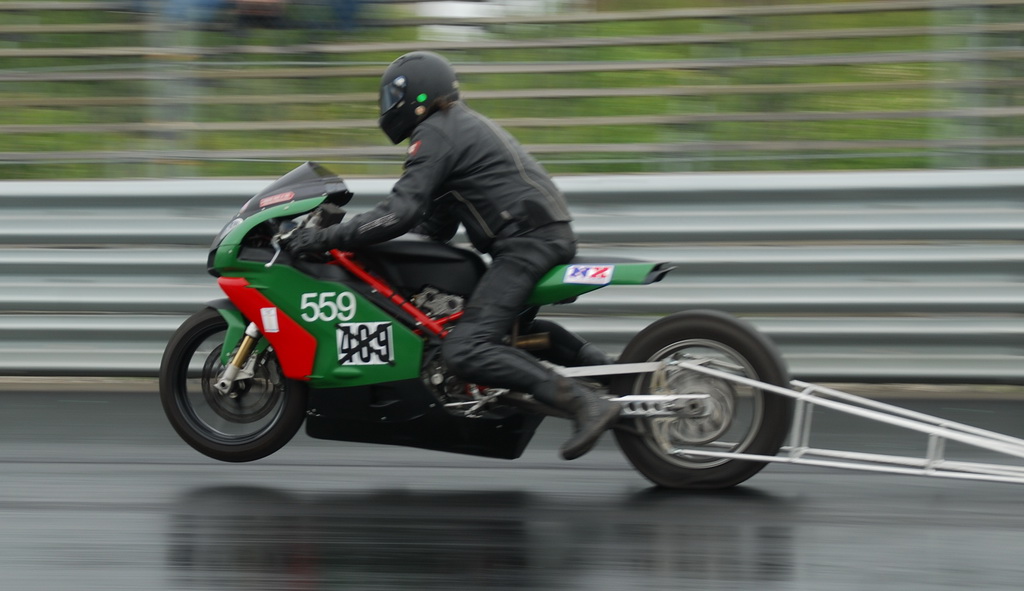 Christian had repaired the turbocharged Honda, and team Sideburns ran both bikes once on friday evening. 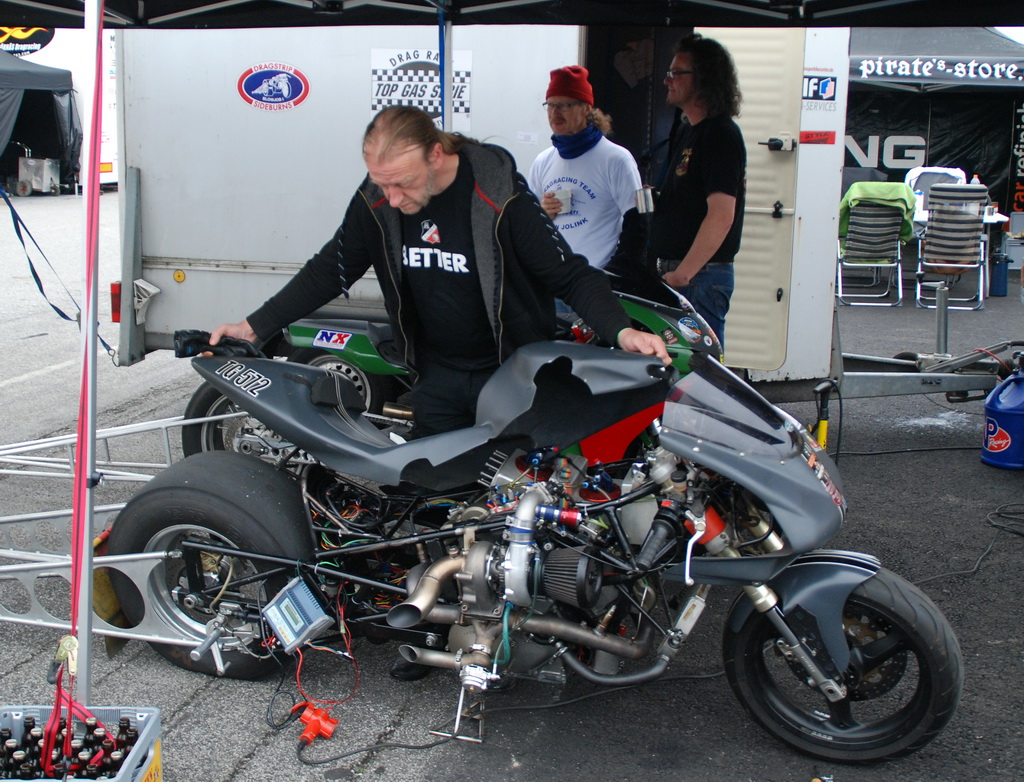 Christian's homemade clutch did not behave the way he expected, and the motor died after the start. But he hit the starter button, and made it to the end. 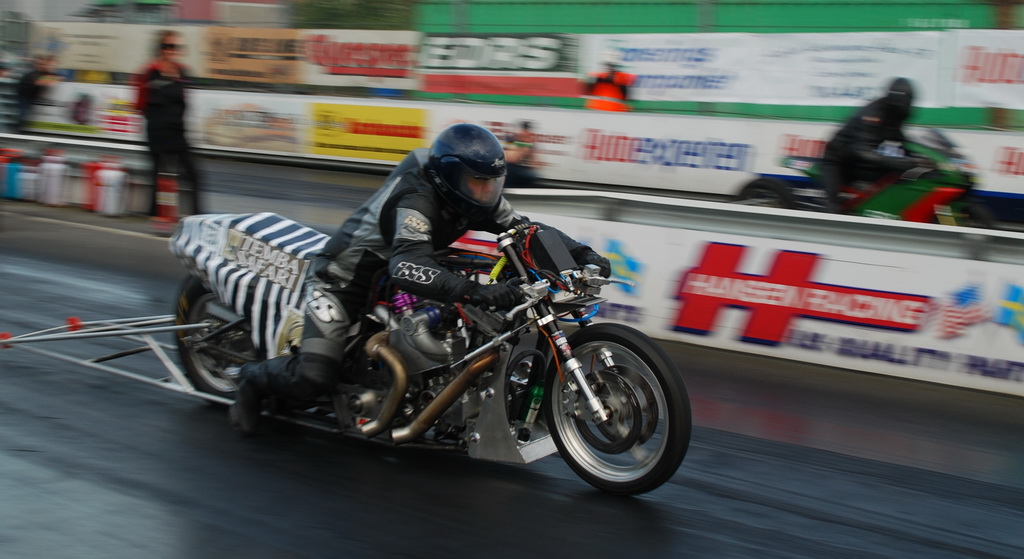 Anders Jensen (above) qualified #4 with his homemade blown Harley dragbike, and gathered important data for tuner Jörgen Lindskog, who would come the next day to assist the team.

A very strong performance by the two quickest teams from Denmark. 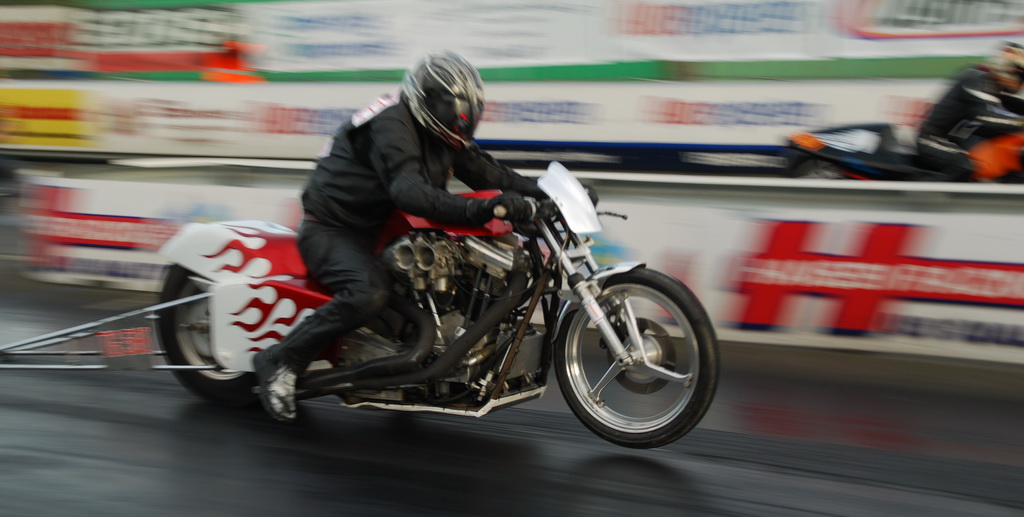 Frederik Schack did 4.8 seconds in the left lane, Lars Birch Andersen did 5.26 in the right lane. So they claimed place number one and two. And held their position untill raceday.

Birch came back for another attempt that evening, but a broken wire prevented him from starting. Here's the list after the first two rounds:

On saterday the predicted rain came, after two pair of Pro Xtreme cars had run (in 3.8 seconds!!!). And there was just this little machine to try and blow the track dry. 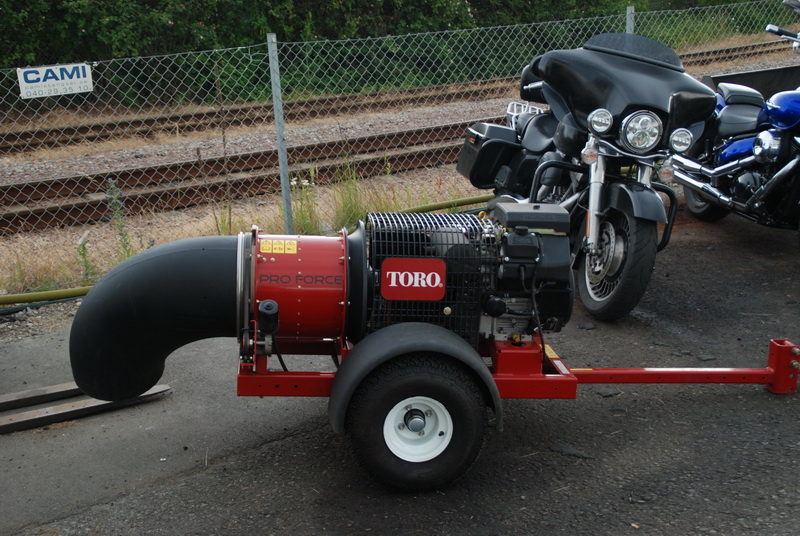 For Jan Malmberg it was not a not waste of time, he spend the whole day trying to solve his problems.
"Full Throttle" mechanic Jaap went over, to have a look at the Motec data, and Mr Lindskog checked Malberg fuel system.
And in the early evening there were some positive sounds coming from the Swedish tent.

Sunday started cold, but it was dry and the sun came out later that day. Two more rounds of qualifications were held, and Harry van Schie advanced to the fourth spot in his first attempt, but was pushed down to place #5 again in the last round by Olaf Menzi , who's helper had spoiled the first run when Olaf was unable to shift. Below two pictures of Olaf at the launch. 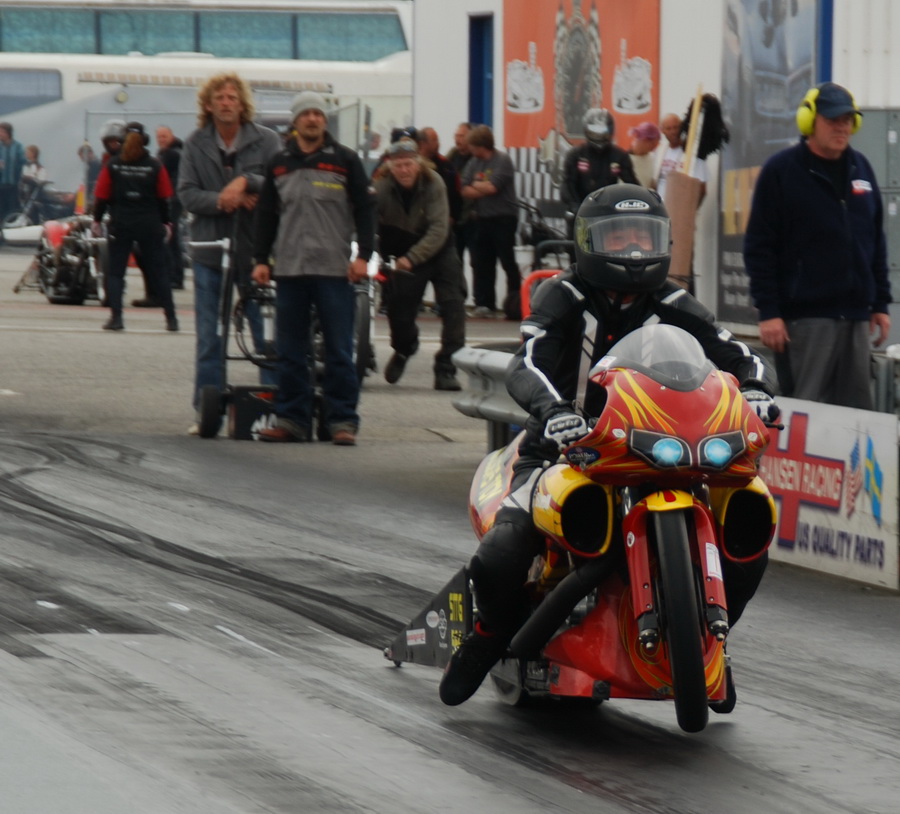 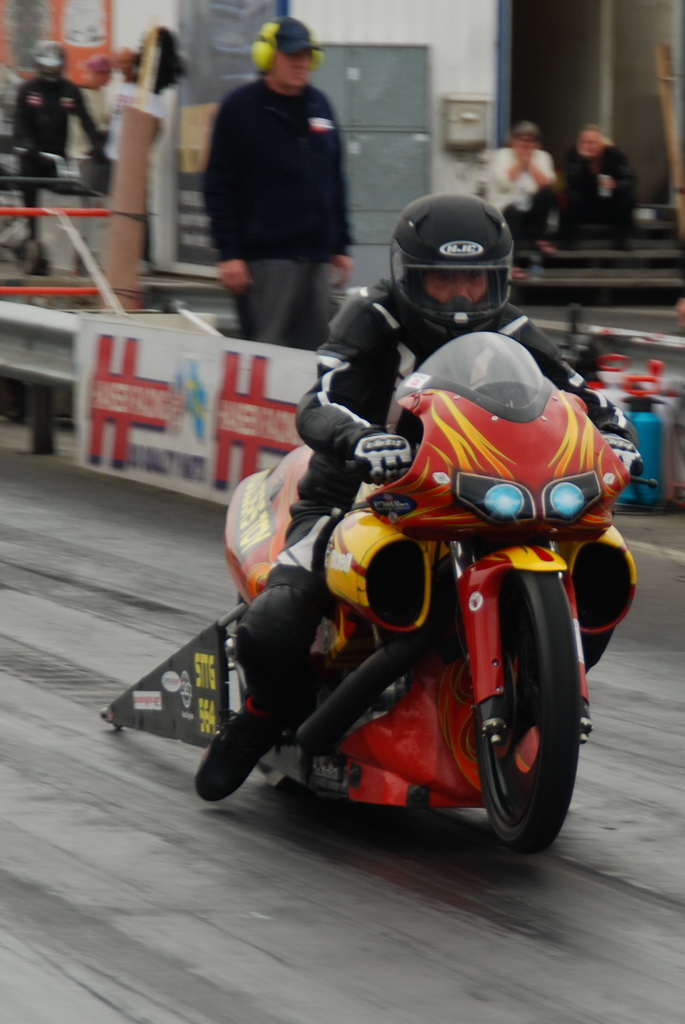 Christian Bruhn's Honda seemed to run better then on friday...

But an oil mist at the top end indicated that the engine was dead already, before he passed the finish line.

Malmberg ran the bike after a poor burnout, and managed to get on the bottom of the list. 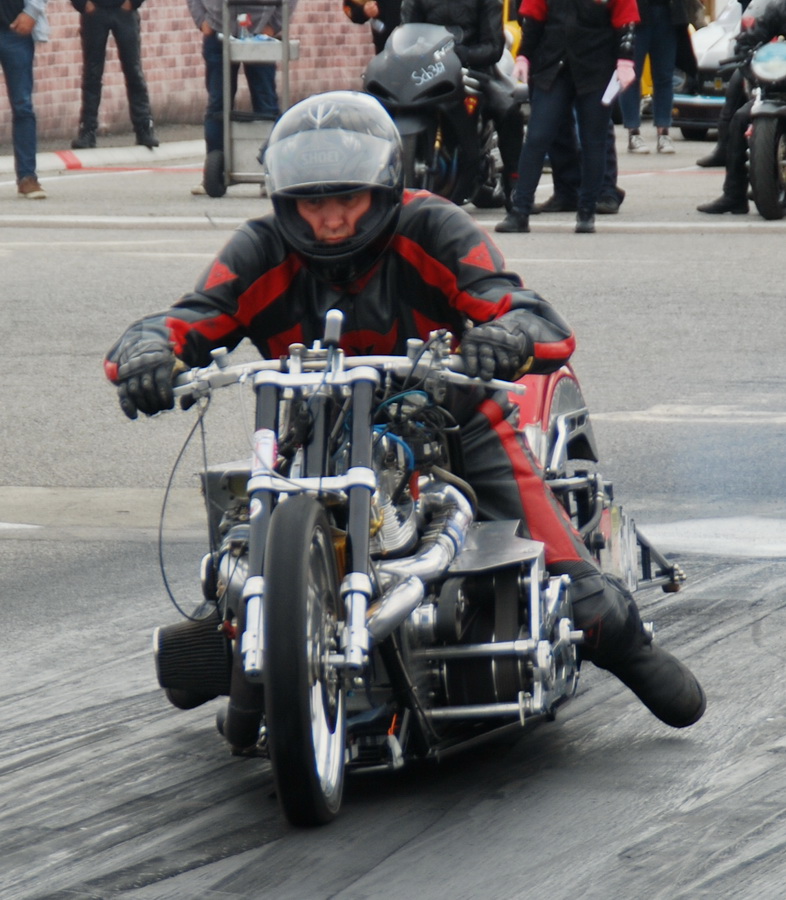 Qualifications after round three:

During the last round, team B&B managed to step up.

Birch did a new personal best of 5.22 seconds, a new best 60 foot of 1.19 sec. And he widened the gap with the #3. Well done Birch! Anders Jensen also improved his time, but was also pushed down in the final list.

A flow chart was produced, the sun was out, and track condition were improving. 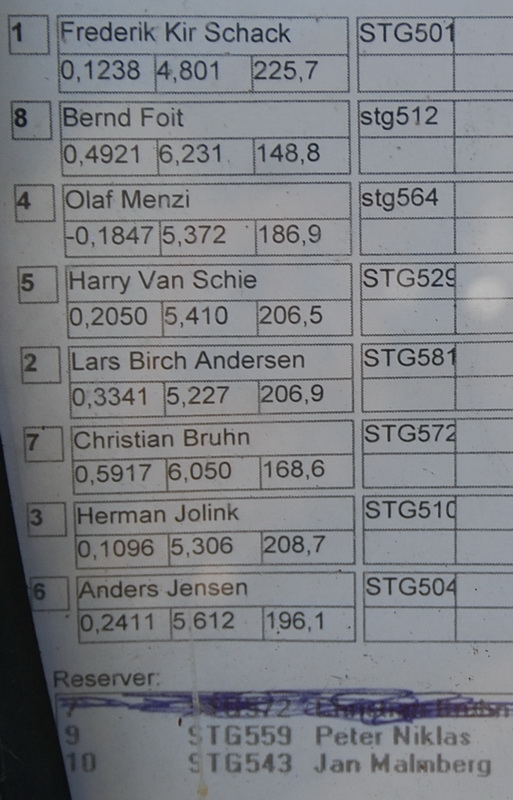 Mr Foit had signed off, so Peter Niklas came in as first alternate.
He was easily defeated by top qualfier Frederik Schack in the quarter finals. 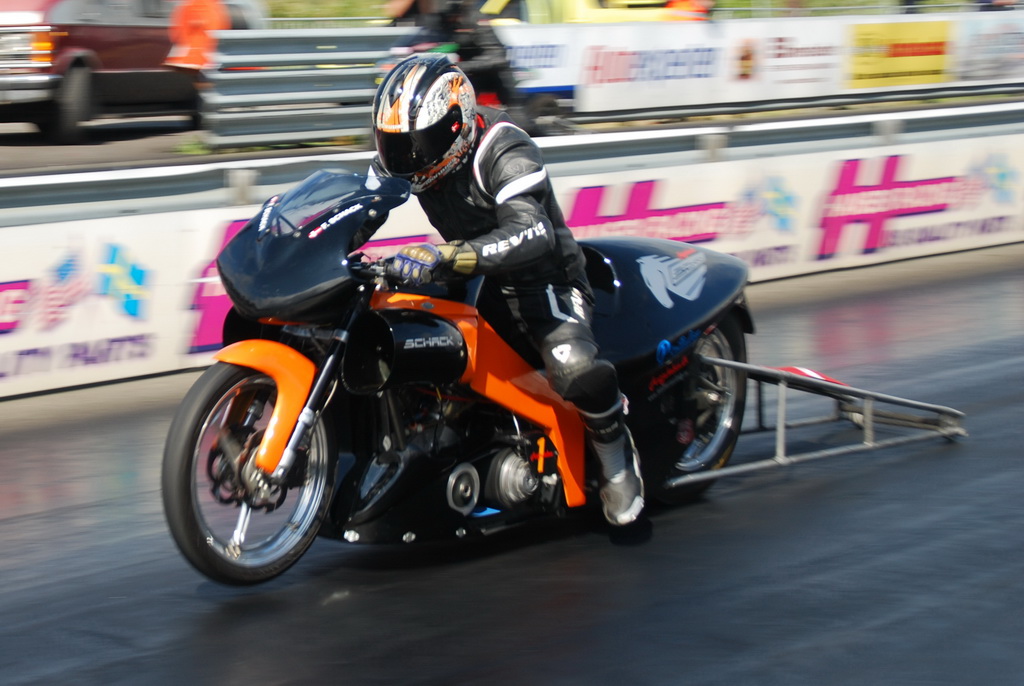 Olaf Menzi's bike (below, right lane) hesitated at the start, and completely stopped after passing the finish line. 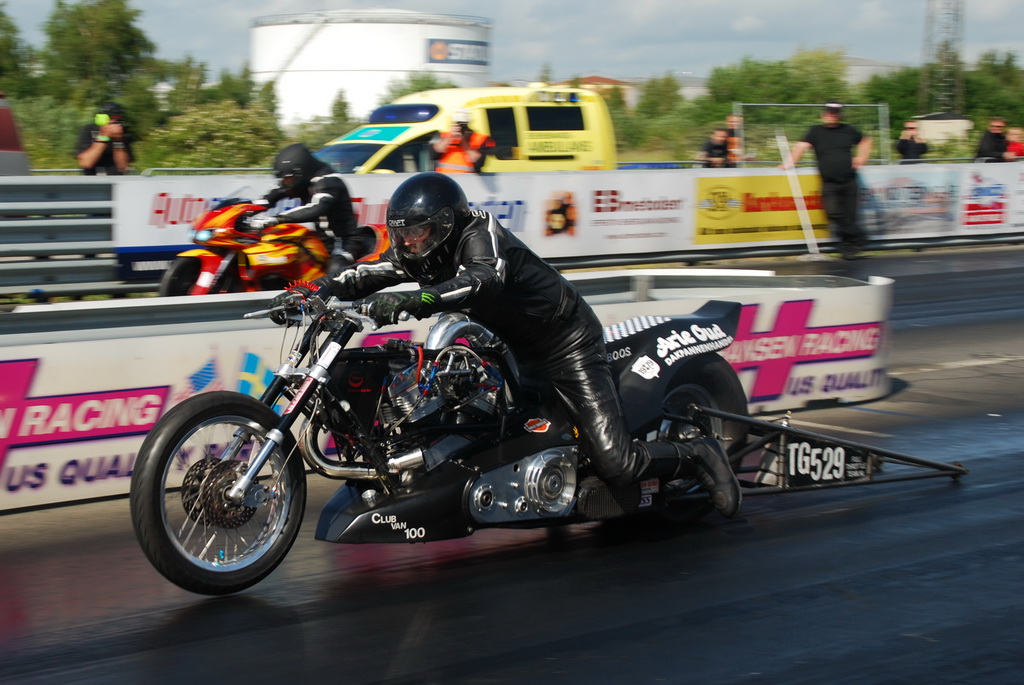 Harry Van Schie had the best reaction time of all quarter finalists, made his best pass of the weekend, 5.33 seconds, and advanced to the semi's.

Lars Anderson's opponent was Bruhn, who was unable to race, and second alternate Malmberg was also not able to compete.

So "Birch" got a free ride into the semi finals.

Anders Jensen and Herman Jolink ran side by side for about 70 meters.

Then the Harley lost power, the Ducati took the lead and Herman Jolink advanced. 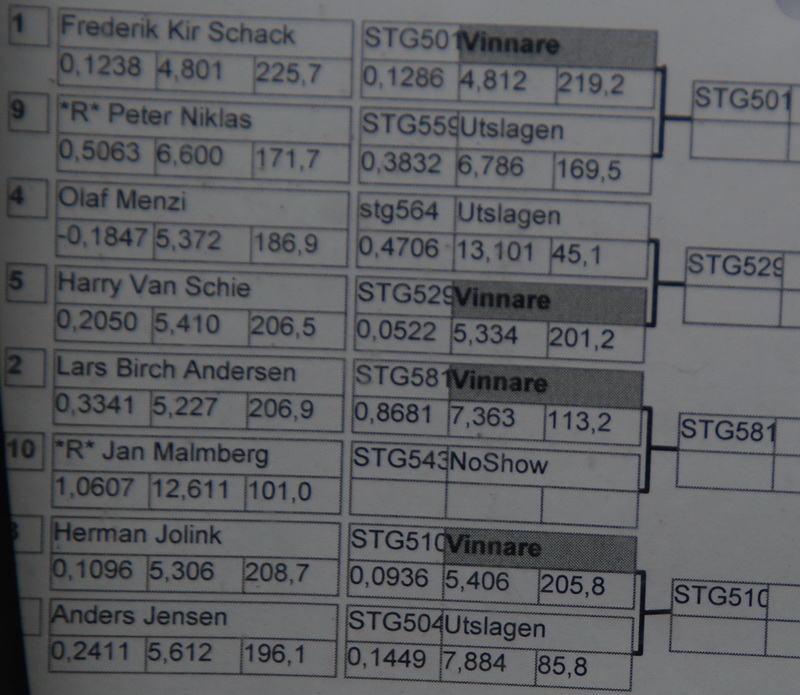 So it was "Denmark against the Netherlands" twice in the semi finals. 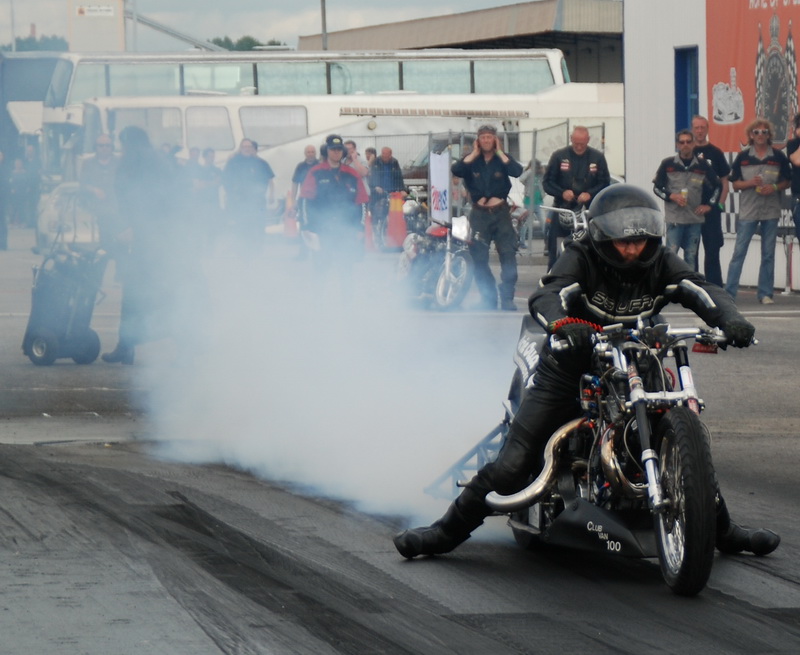 Harry van Schie was too eager when he left the startlime. The bike went sideways almost immediately. So he went off throttle, then rolled (safely) into the other lane and passed the finish line way behind Schack.

Some problems for Schack's quick bike at top end, and 5.1 seconds on the scoreboard.
A little later they found a broken valve spring to be the cause of it.

Birch Andersen had a good chance to get into the finals.
But by human error, he gave it away.

Birch is still not certain what went wrong, as they went side by side for a while. Maybe he missed the shift button to go in third gear. Jolink rides his Ducati almost like a robot, and produced another straight and loud 5.3, enough to get into the finals.

And in the pits Jolink got the message that team Schack would not be racing in the final round.

Instead of taking it easy, Herman gave it all he had in attempt to put 5.2 on the scoreboard. 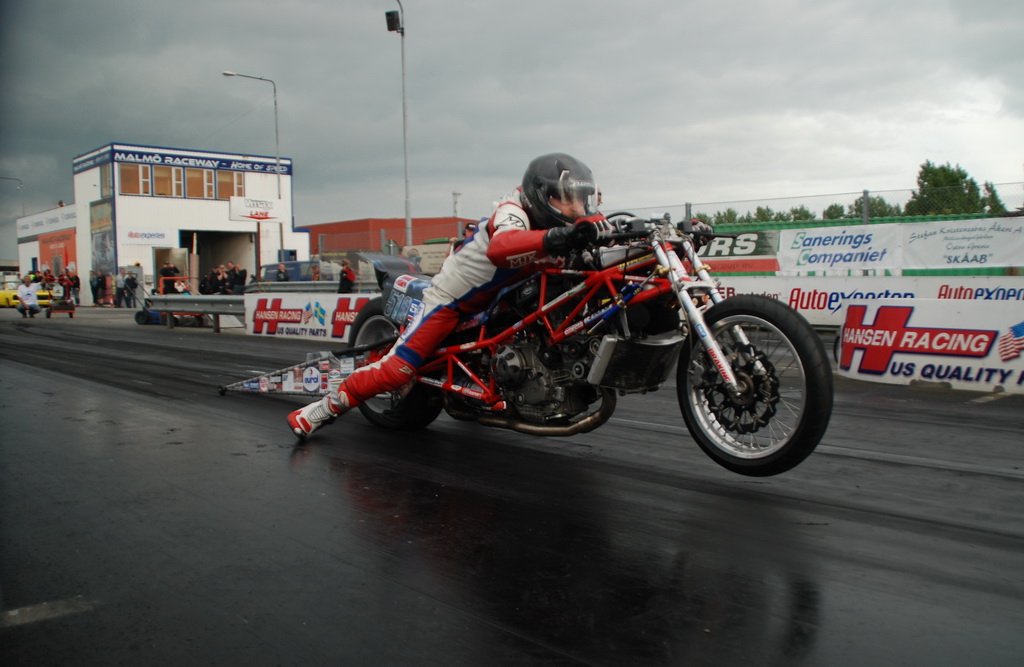 Like always, Jolink saved his best run of the weekend for last, with 5.30 as the result. 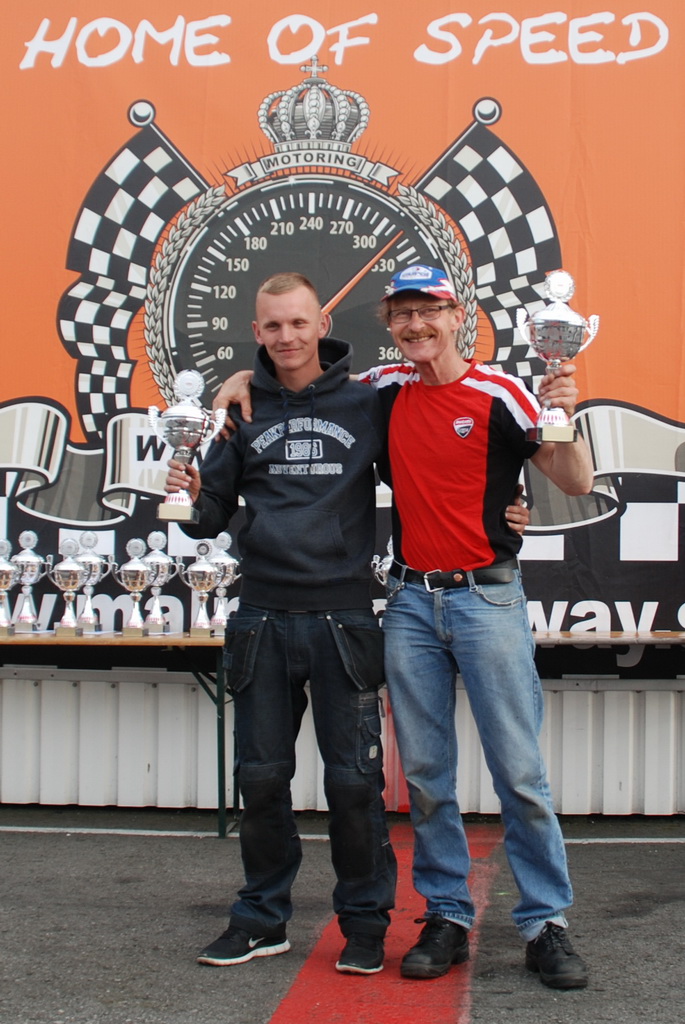 Frederik Schack (left) is still in the lead in the champonship. But the difference between him and Jolink is less then two rounds.

Only trophies were given to the winner and the number two.
Below a picture of the number three of Malmö, Birch Andersen. 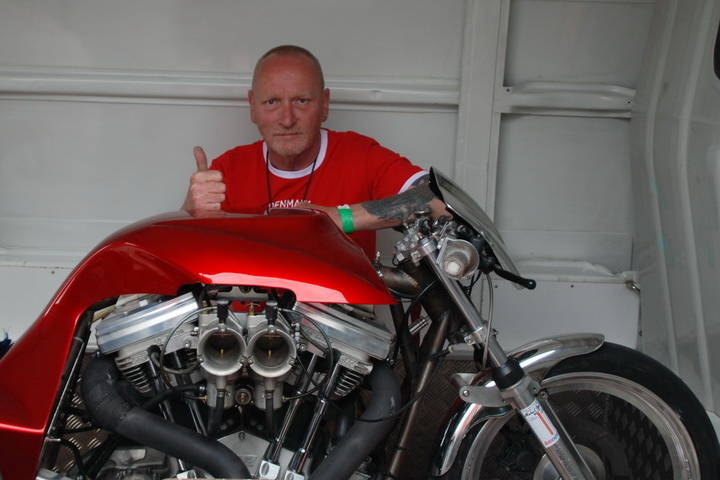 Also at place # 3 in the campionship, with Heitmmann still at the #4 spot.

The next race is very soon, and Charley Abraham from France is one of the quick guys on the entree list.
See you all in Drachten. 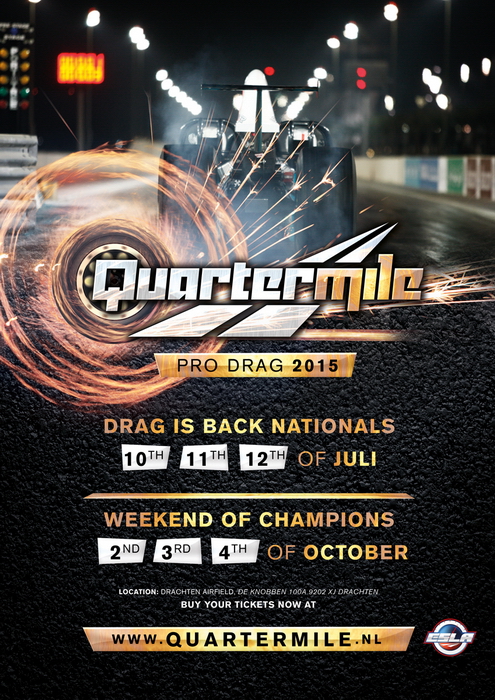