Race #7 in the 2015 championship: the "Winter Nationals", and our second visit to Malmö raceway this year. Two rounds of qualifications were planned on friday afternoon, then a few more on saturday, then on sunday a dragrace on the 1/8 mile. And seven topgas teams came out to race.

Team BB-racing of Birch and Bohn had arranged a replacement engine after the damage at Mosten and were ready to defend their third place in the championship. 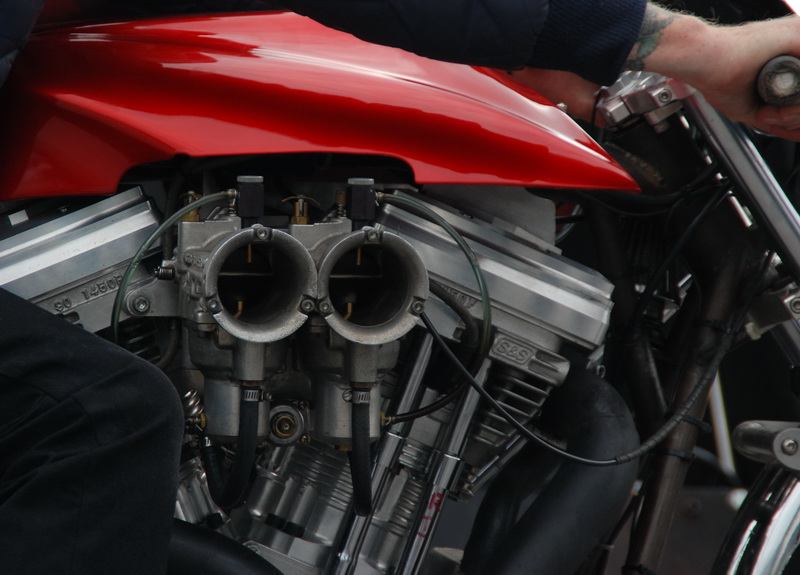 But the only one who could threaten them was Harry van Schie who did not show up.

The Swedish honour was defended by Jan Malmberg, who was working in Poland and had flown to Malmö, and arrived at the track on foot on friday morning, while his wife came in the afternoon with the loaded van. To kill the time, Jan had a test ride on Jesse Bohn's chopper.

Jörg Lymant and Frank Peisker from Germany arrived early at the track. 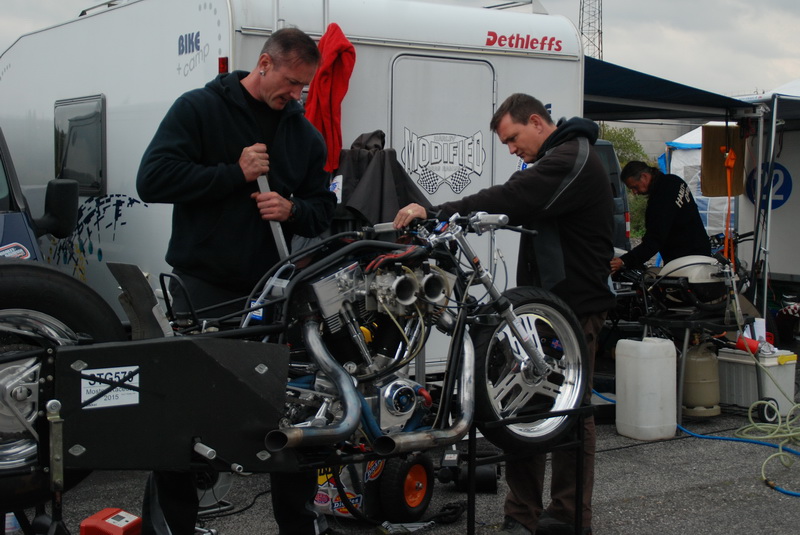 There are still some bugs in Peisker's bike, so Frank and his brother worked on it all weekend. Jörg lymant had attended the last two races on his modified Harley, but Jörg has restored his supercharged topgas bike after he crashed it four years ago.

The carburators have been replaced by a fuel injection system. So into the line up. 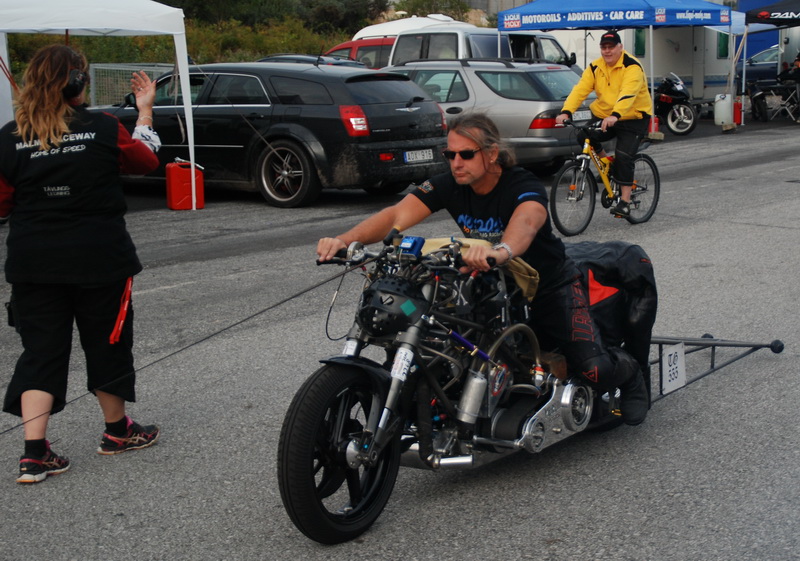 Anders Jensen from Denmark and his team were trying to set up the clutch while tuning the homemade supercharged Harley. Anders and Birch were first in line, but Birch had been warming up his engine for too long and ran out of fuel after his burnout. 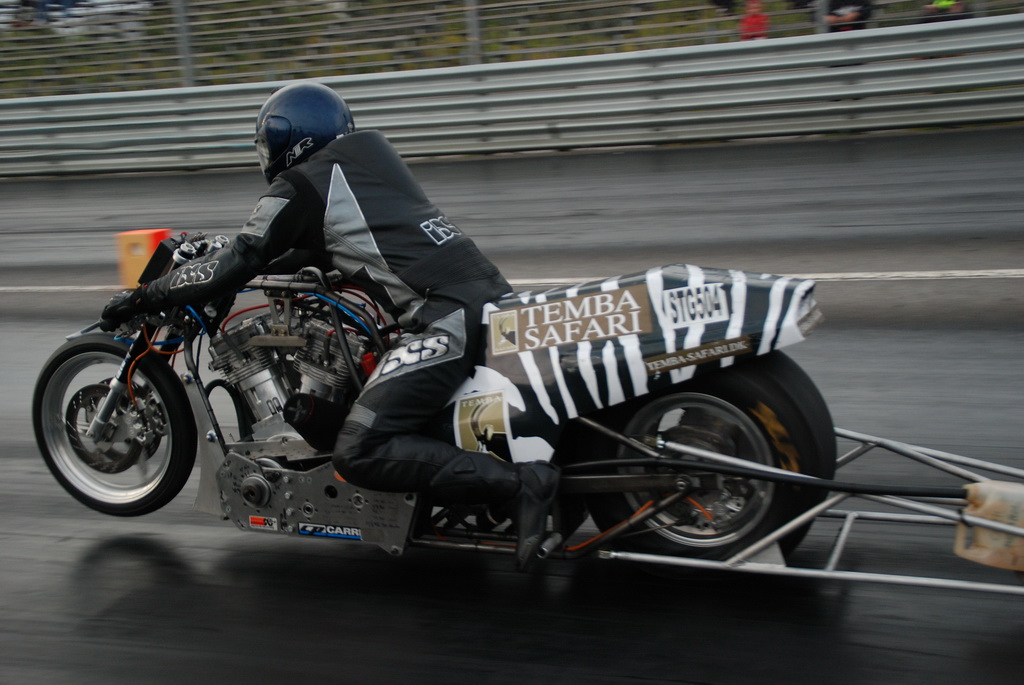 The safari of Anders Jensen lasted 5.7 seconds. Then a big burnout and a poor run by Jan Malmberg (below) on his double blown "Derringer" dragbike. 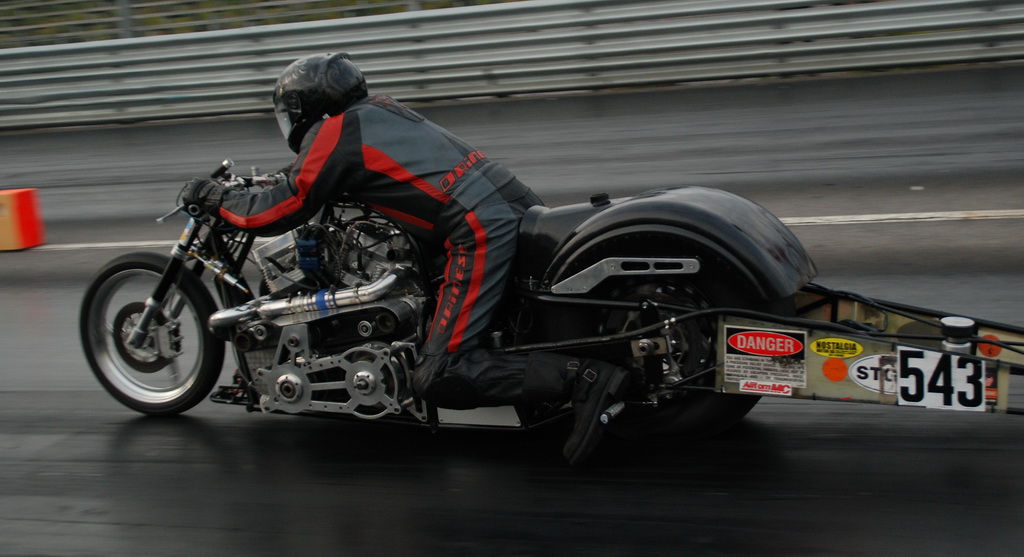 Unidentfied problems bother Malmberg all season. But there was a sign of progress at the last race. In the other lane, Peiker shut off after the burnout, and went back to the pits.

Next pair: Herman Jolink from the Netherlands did a great run on his Ducati, 5.23 seconds, an excelent beginning of the race, even quicker then his best time at Mosten. Jörg Lymant needed twice that time to get to the end of the track. 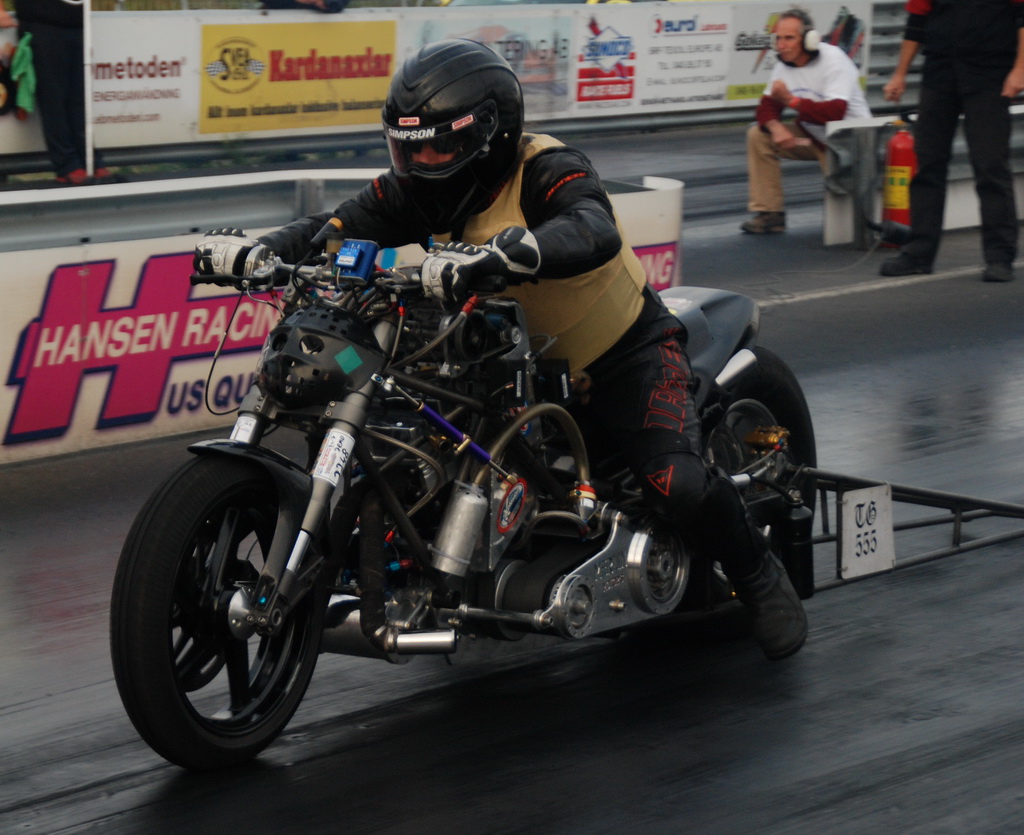 Jörg found an bend valve stem and damage to the valve guide after his run, so he did not come out to race anymore. 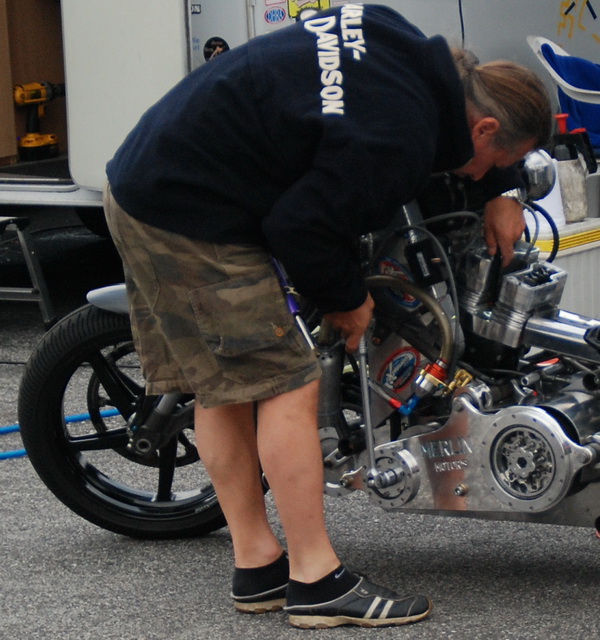 But he was busy all weekend helping Peisker to find the cause of his problems.

Frederik Schack, already the 2015 champion after the last race, had unloaded the bike and tent and waited for Rene and Johan to arrive, so he skipped the first round.

Pro Xtreme cars ran fast, but one of them damaged the guard rail, so much repair work to do for the track crew and no more time for a second round on friday.

Saturday morning, first run for Schack on his home track and a great one! 4.666 seconds, 0.06 seconds quicker then the last race, and a new personal best! 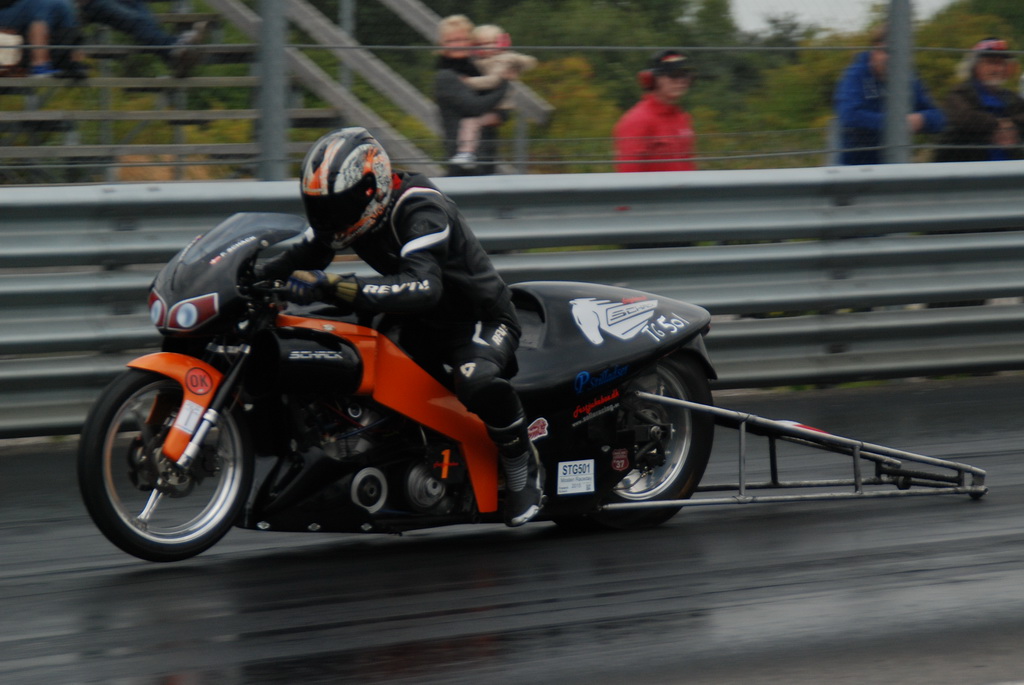 Working hard to keet it straight. 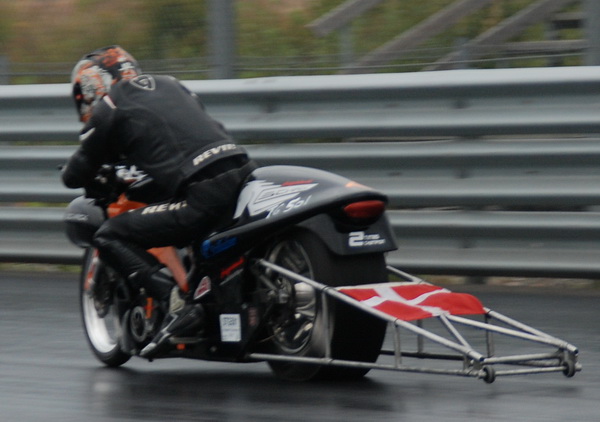 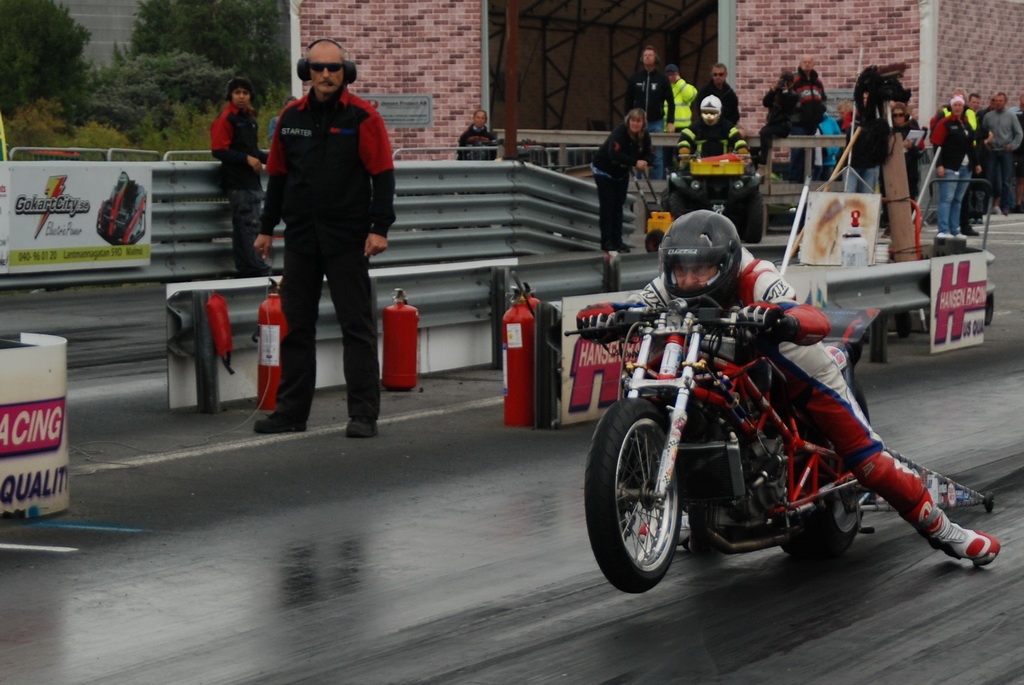 A great 1.14 on the 60foot for Jan Malmberg, but still hessitations from the engine during the run. Frank Peisker gets thumbs up from his brother on the picture below. 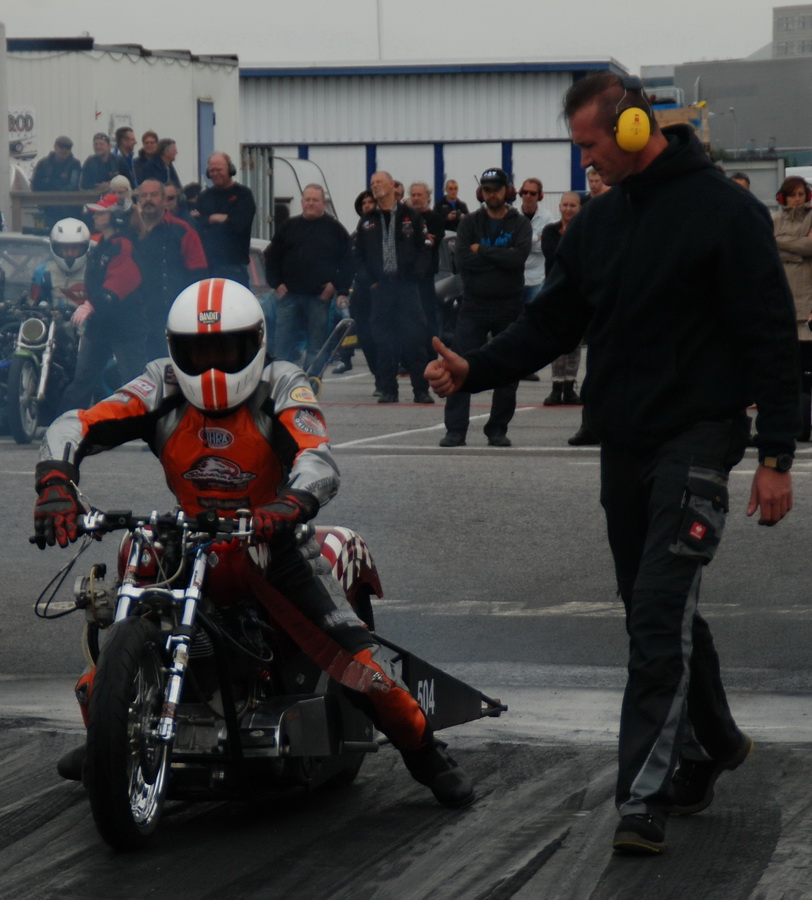 But the engine stopped one second later, and they went back to the pits. 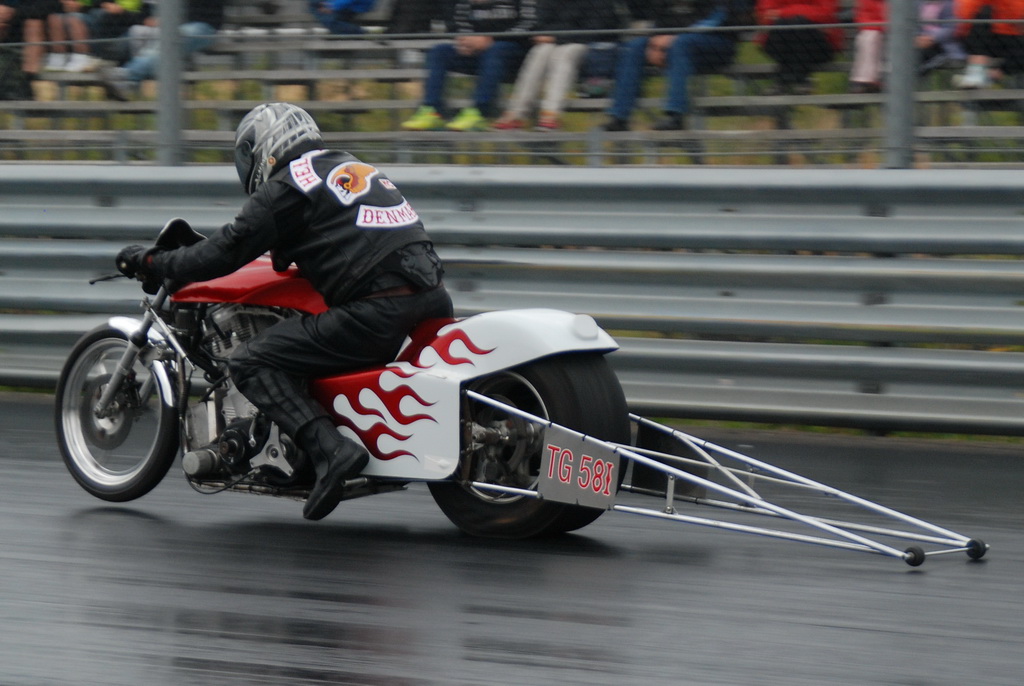 Lars Birch (above) on his first pass. Not the result he hoped for. Anders Jensen (below) made a big rolling burnout that looked somewhat like a drift show. 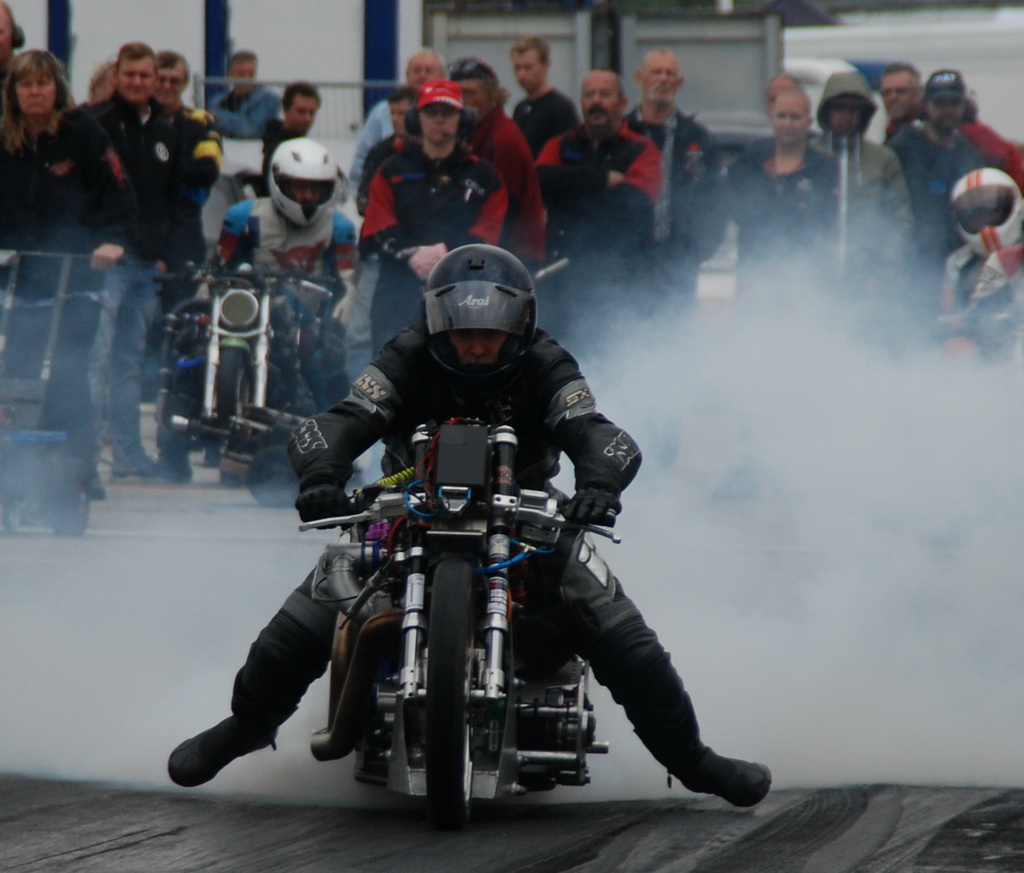 But no improvenent for Jensen.

A big oil spill caused a long delay on saturday afternoon. At half past four the third qualification round was held.

Hardly a burnout but a big improvement by Jan Malmberg, a good run but a bad 60foot. 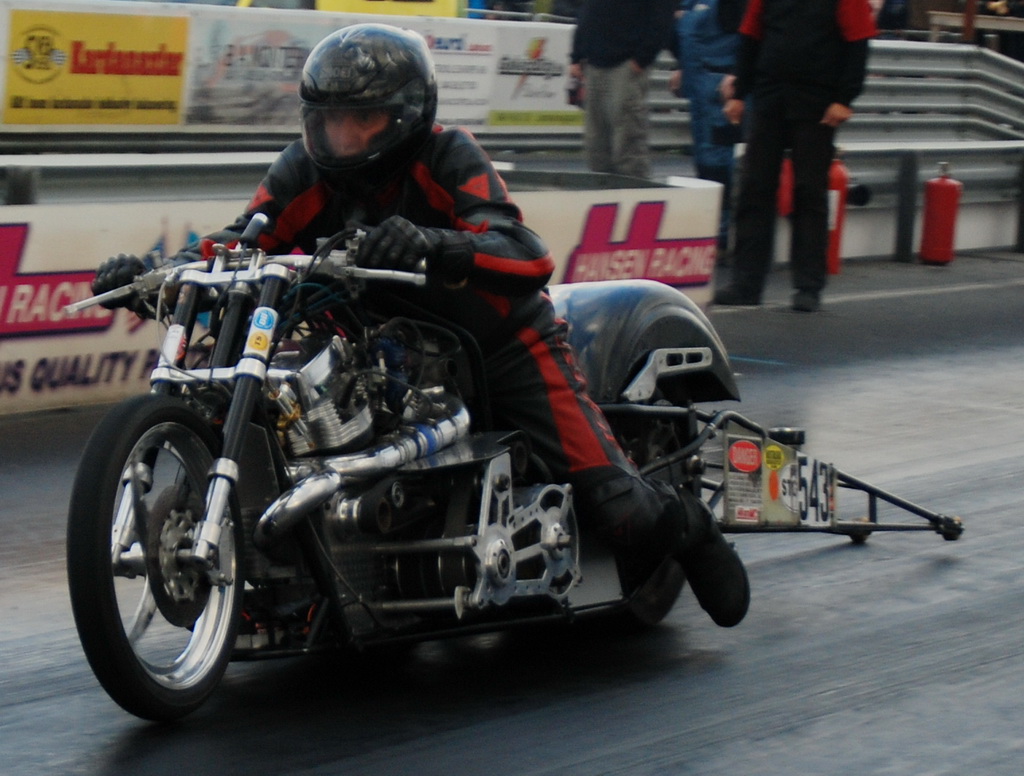 Jan now needs to combine the best of his last two passes. In the other lane, Jensen's motor stopped after the lauch.

Herman Jolink could not improve. 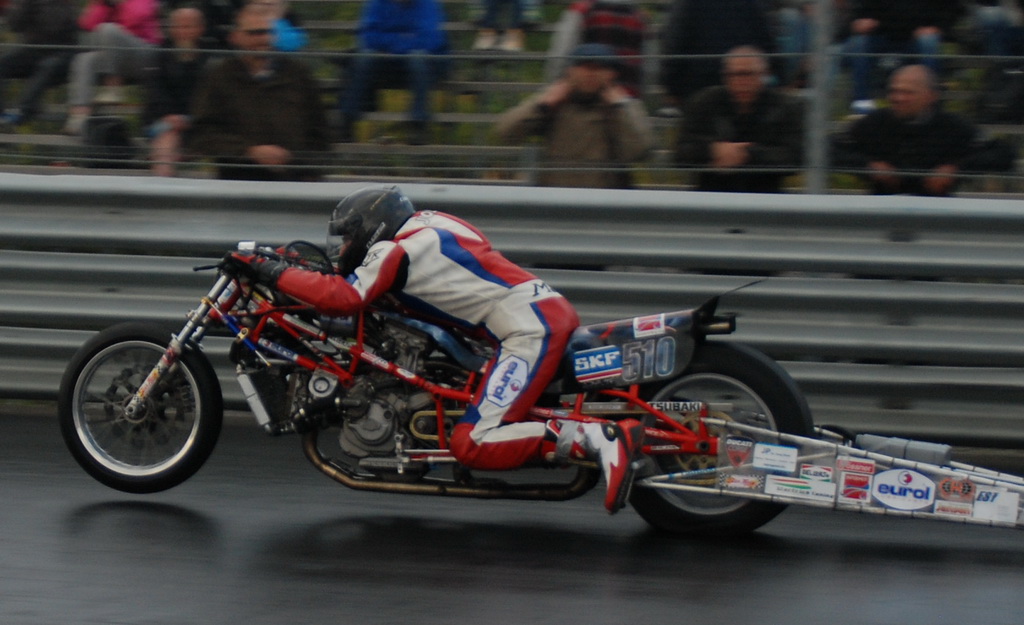 And had a slippery adventure in the braking zone.

A slower sixty foot for Schack, but a better time on the clock ! 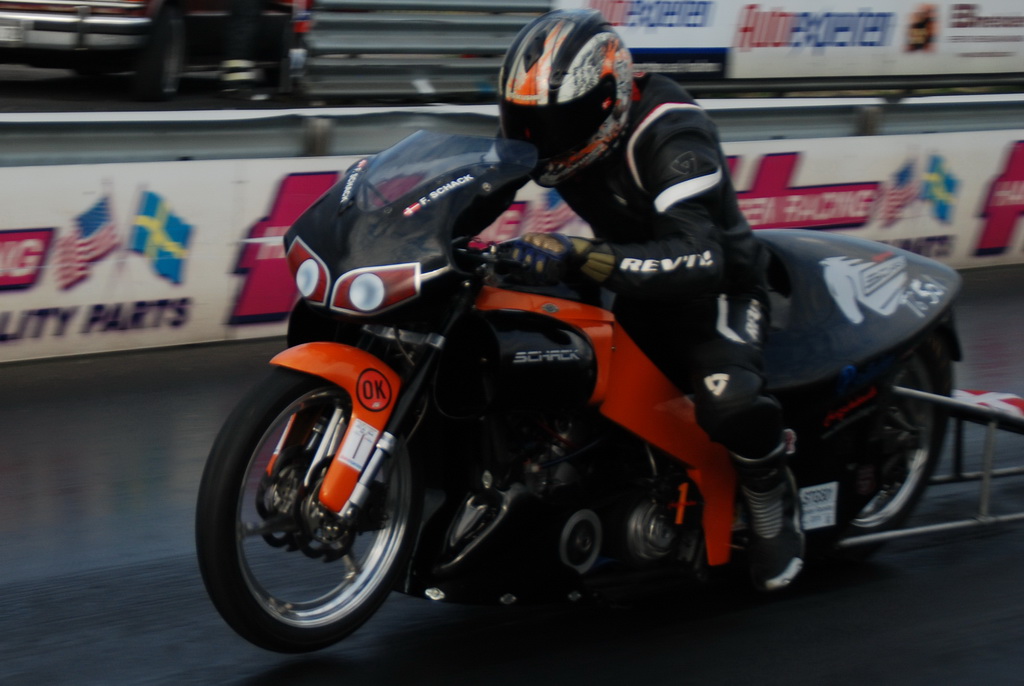 And less work to keep it straight.

And now Frederik Schack broke it, the 4.666 backs it up. He did it on the same bike and on the same track! Fantastic!

At a quarter past seven on saturday evening came the last chance for Frank Peisker to qualify. 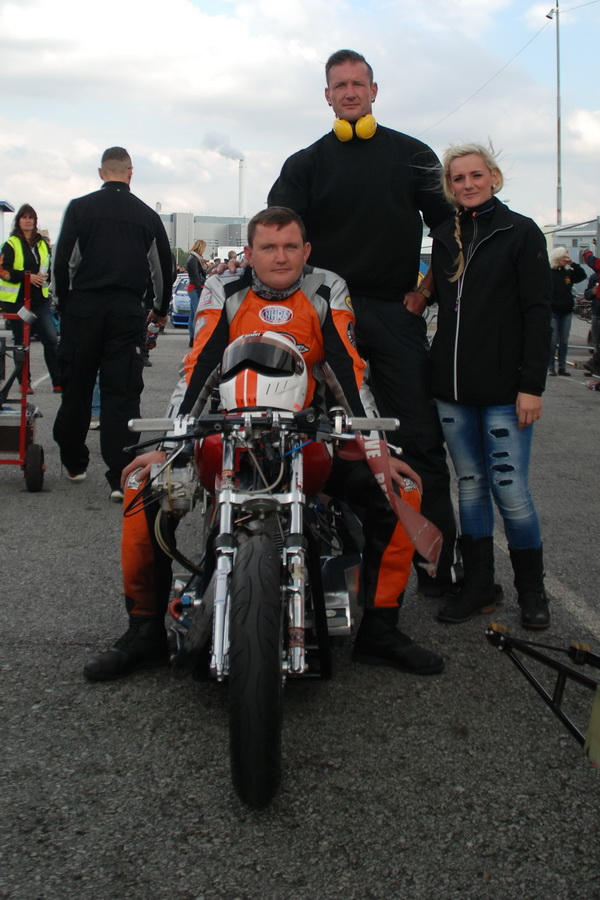 Birch had improved slightly in round three. 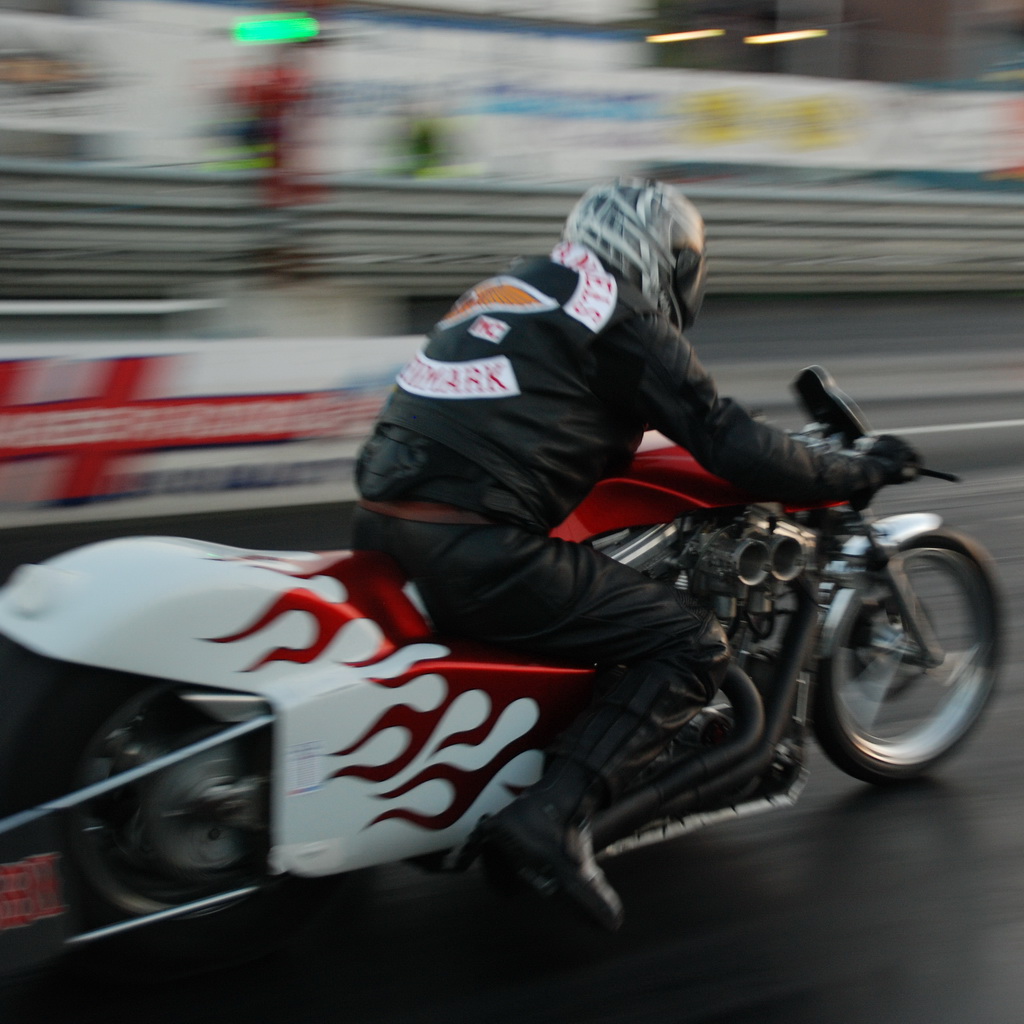 But he could not do better in the last round. In the other lane, Jensen improved a little.

Herman Jolink tried to launch with more revs, but still his engine died after the start.

Again a poor burnout, made in the first (wrong) gear. But he bike finally works the way it should. A big relief for Jan and good news for Sweden!

Peisker did not come further then the burnout spot, so he's didn't qualify. 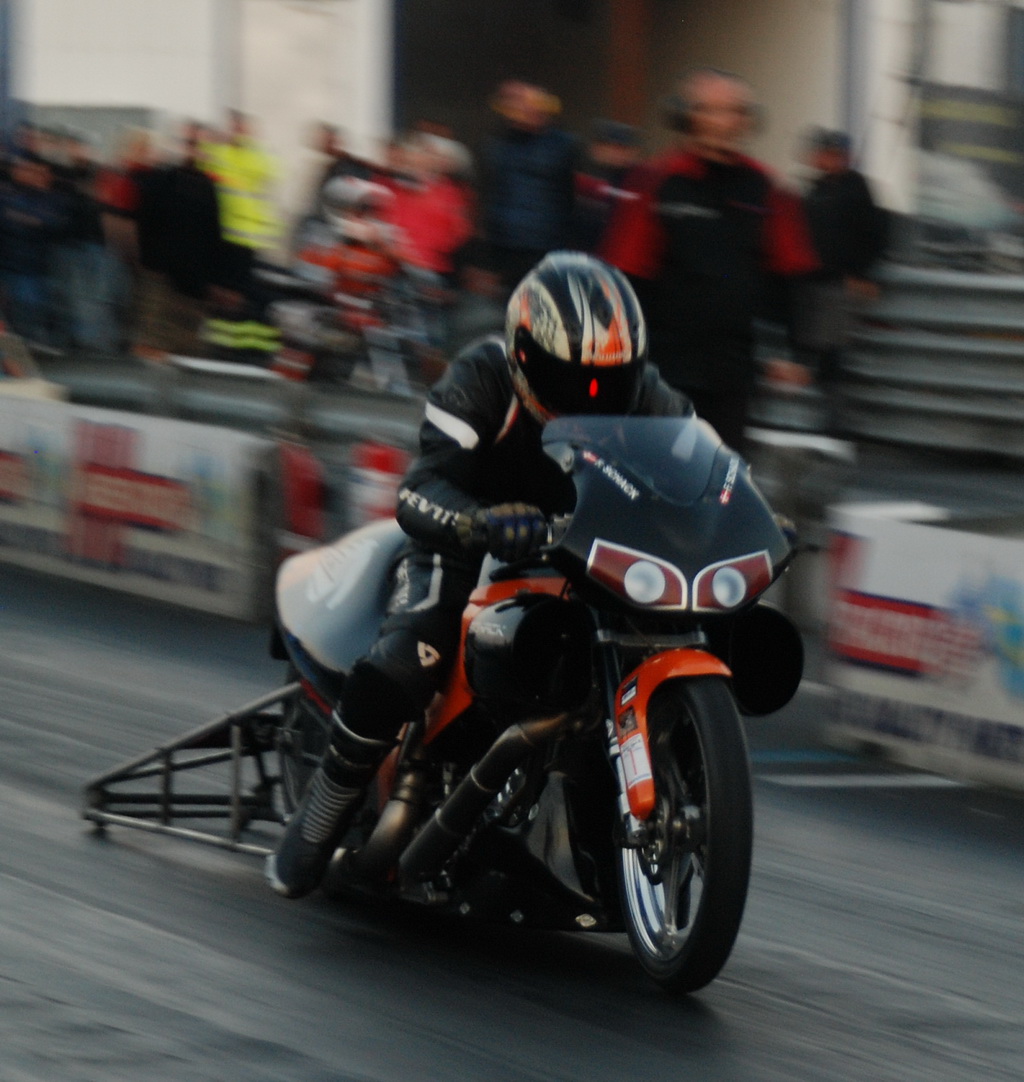 And no better result for Frederik Schack.

After saturday's qualifications, Birch was certain of his third place in the championship, so that evening a prize giving ceremony was held to honour the top three of 2015: Frederik Schack, Herman Jolink (left side) and Lars Birch Andersen (right). 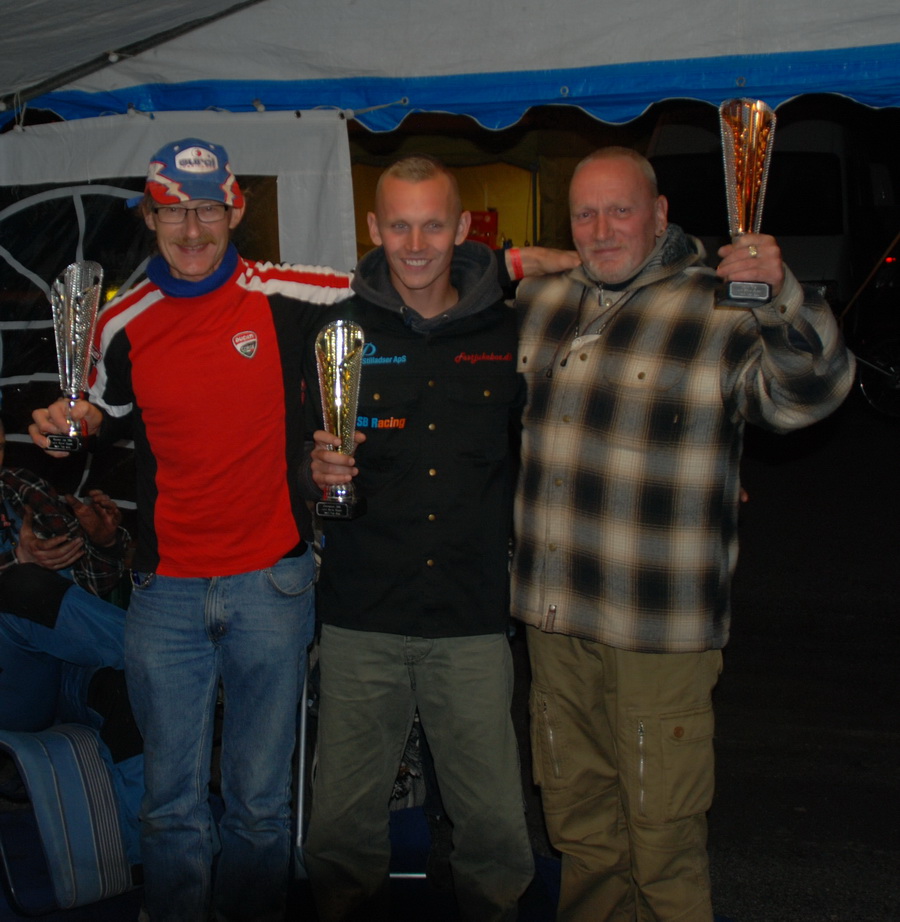 Congatulations! These guys raced at all seven races of the serie. Respect!

On sunday morning it started to rain, and technical consultant Mr Lindskog had come to talk to team Jensen about the setup, after watching the qualifications on the webcam. 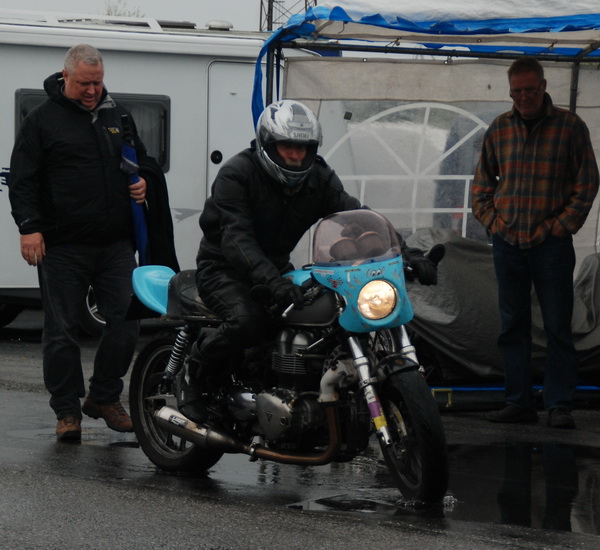 And their masterplan is to replace the blower with a turbo during the upcoming winter.

It rained untill three in the afternoon. At that time, the Schack family and their friend had gathered in team tent for a small party small in honour of the 2015 champion and all who had helped him. 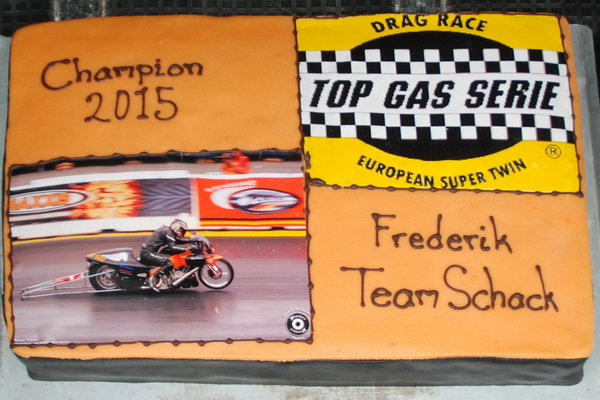 While we enjoyed the cake (above) and a few drinks, the crew of Malmö raceway kept working at the track, that was dry and prepaired at about 18:00. Bohn and Birch and Herman Jolink had already left, and Malmberg and his wife had already packed the van and went to sit on the grandstand. Jörg Lymant was Schack's opponent, but broken. The two remaining racers were on the opposite sides of the ladder, so race controle declared them the finalists, no further bye-runs were needed. At 18:20 Anders Jensen and Frederick Schack lined up and ran the finals.

Jensen'last opportunity to test the clutch, and it seems to function, as he did his best time and 60foot of the weekend. 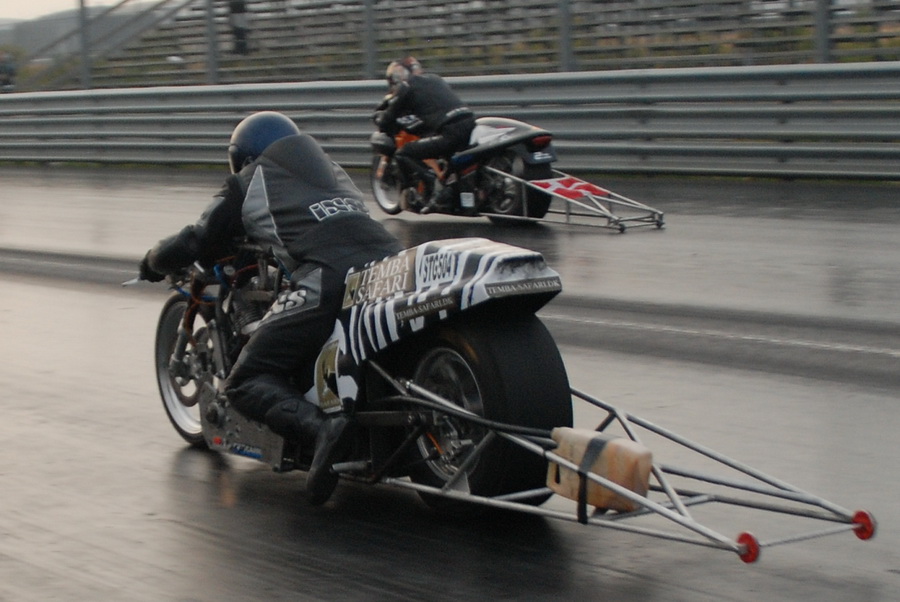 And Frederik Schack won the last race of the Euroserie 2015 this year in a great style.

Later that evening, Frederik Schack was given the award for winning the race, while Anders Jensen and his team were already on the road. 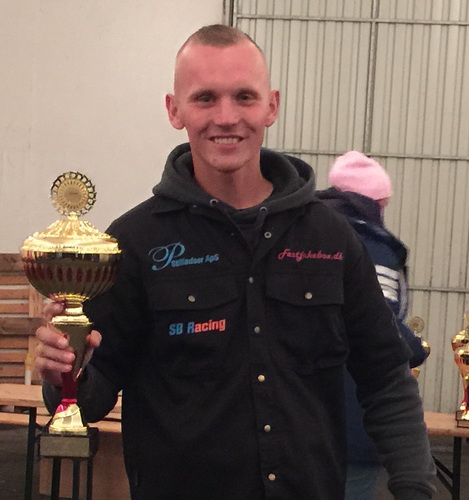 Harry van Schie and his team are on place #4 in the2015 championship, place #5 goes to Olaf Menzi. Jan Malmberg moved up to place #6, passing Cord Albers, who is on #7. And his second place at Malmö made Anders Jensen jump to place #8.

Many thanks to the crew at Malmö.

At the first weekend of Oktober 2015, the quarter mile track at Drachten in the Netherlands is open for three days of "test and tune", and Chris van Nimmen, Christian Bruhn, Yvana van den Berg and Harry van Schie are on the entree list. 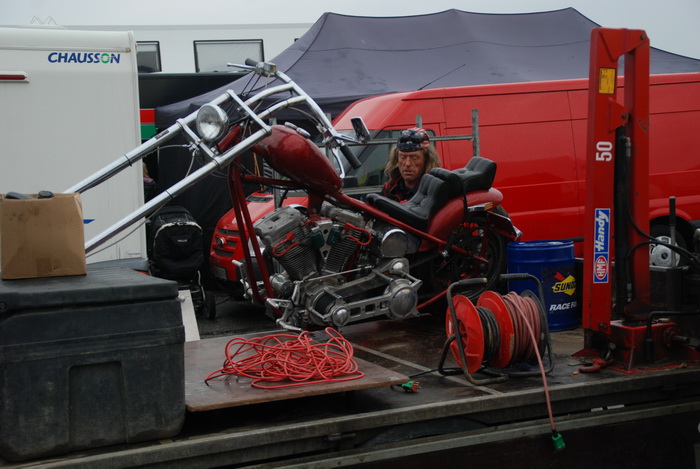 The annual meeting of 2016 will be held mid March of that year. Details soon.